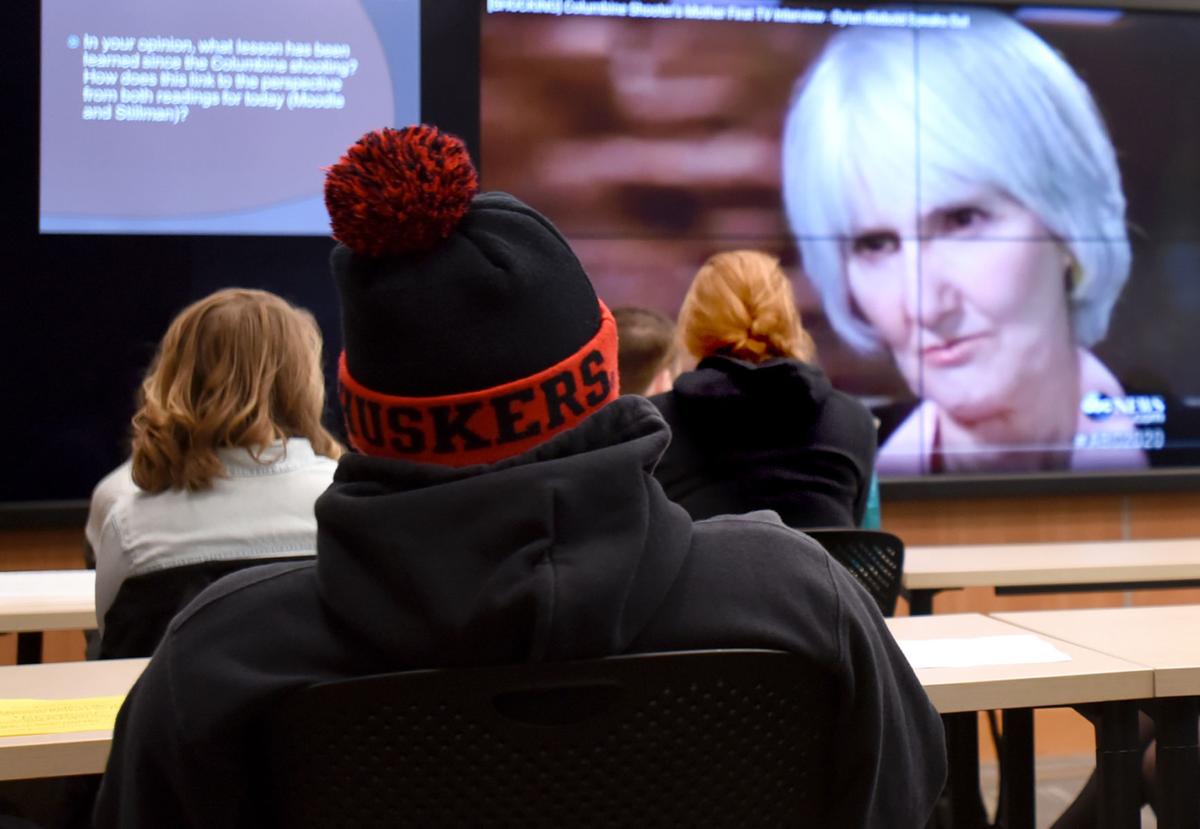 University of Montana students in one of the six classrooms renovated with a $4 million donation from Dennis and Gretchen Eck, watch a video presentation on a huge split screen in the front of the class. The rooms offer students and faculty in the College of Humanities and Sciences high tech learning environments, such as "smart" screens mounted on multiple walls. 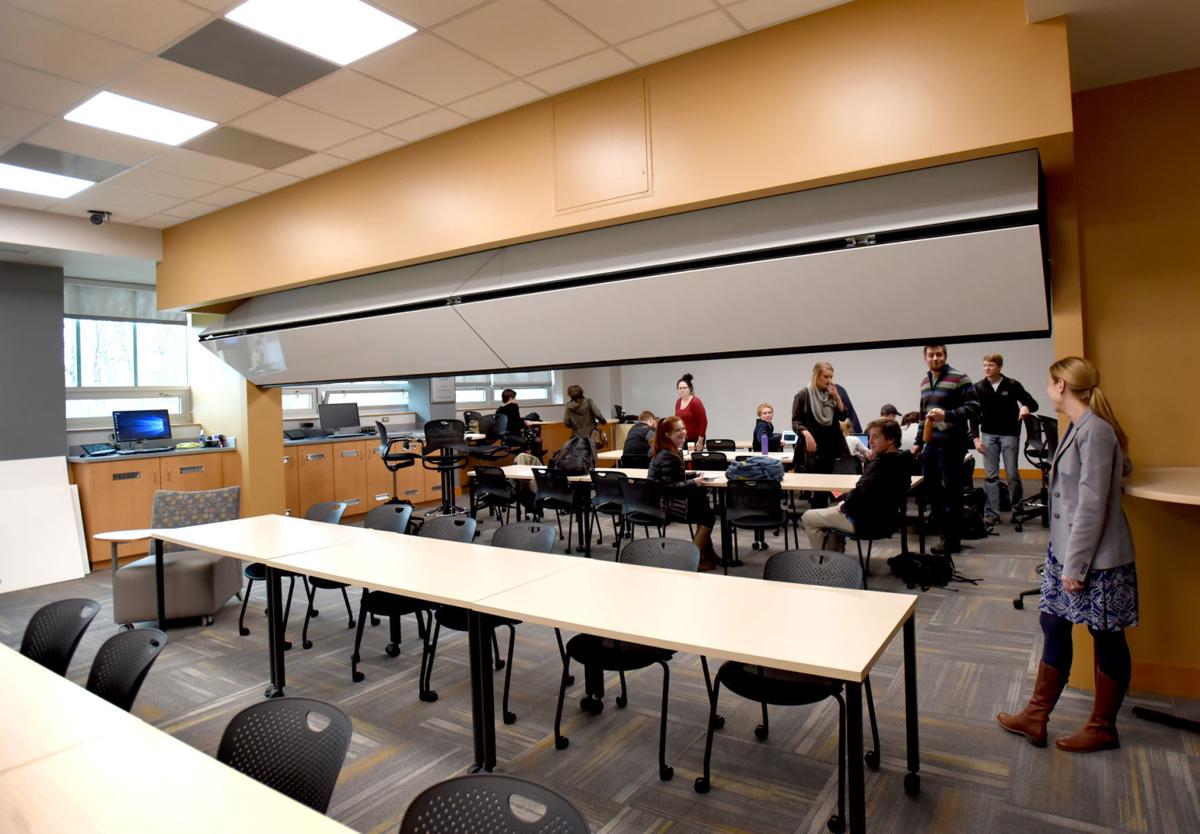 Sara Rinfret, assistant professor of political science at UM, right, demonstrates how a folding wall between classrooms can be lifted to combine the two rooms into one. The first phase of the Liberal Arts Building remodel is complete, and the second phase launches in December.

University of Montana students in one of the six classrooms renovated with a $4 million donation from Dennis and Gretchen Eck, watch a video presentation on a huge split screen in the front of the class. The rooms offer students and faculty in the College of Humanities and Sciences high tech learning environments, such as "smart" screens mounted on multiple walls.

Sara Rinfret, assistant professor of political science at UM, right, demonstrates how a folding wall between classrooms can be lifted to combine the two rooms into one. The first phase of the Liberal Arts Building remodel is complete, and the second phase launches in December.

Alexi Corbett can take better notes this year in her public administration class in the Liberal Arts Building at the University of Montana.

When she's sitting too far away to read the board her teacher is using, she turns to a wall closer to her seat.

In some newly renovated rooms, screens take up a whole wall, and the presentation or video an instructor is showing on a large display also appears on another smaller screen mounted on another wall.

"It's absolutely making a really big difference having them on multiple walls," said Corbett, a junior.

This school year, the College of Humanities and Sciences cut the ribbon on six new technologically advanced classrooms in a building that should be considered a crown jewel at UM. Most students take multiple classes in the LA Building, which houses 30 classrooms that see 600 students in all each semester.

A while back, Dennis Eck stepped into the building at the school he'd graduated from in 1968, according to the UM Foundation. The businessman and philanthropist saw that the classrooms hadn't changed a bit, so he and his wife, Gretchen, donated $4 million to bring modern technology and a better environment to the cornerstone of liberal arts on campus.

The result is a significant push to transform the structure built more than 50 years ago into a contemporary showcase for technologically savvy teaching and learning at UM – and the first of multiple phases.

In the new rooms, the seats are comfortable – they're not the old-fashioned chairs with a little desk slab attached.

The air is cool – not sweltering as before – and natural light comes in from the windows.

And in the "technological corridor," professors have modern presentation tools at the ready.

"It's nice to finally meet students where they are in terms of their technological capabilities," said Sara Rinfret, assistant professor of political science at UM.

Rinfret recently taught a class in public administration where some 29 students discussed the Columbine shooting. She showed a video on one screen in LA304 that took up the better part of a wall, and on another smaller screen, she posed a question:

"In your opinion, what lesson has been learned since the Columbine shooting?"

A student from a tiny town in Montana said rifles in the back of pickup trucks are still commonplace and not a big deal at her old high school. Another student, though, said students used to check their guns at his old junior high during hunting season, but now they get expelled for having a firearm on campus.

On this day, Rinfret links a video from her laptop to the big screen, but she can also write on the interactive "smart" wall. She can also ask any student in the room to use a smartphone to beam up a homework assignment onto the wall for others to see.

She can save a brainstorming exercise with students' comments and send it to them as well.

And if she needs a larger space, she can push the entire screen up and away into the ceiling, and open up the room. She can easily push all the tables and chairs around because they're all on rollers.

The new classrooms have varying degrees of technological advancements, from "pretty cutting edge" to "fully loaded," and they're dedicated to the Ecks' grandchildren.

The donors' quiet lesson for their grandchildren is that when a person has enough, it's good to be generous, said associate dean of the College of Humanities and Sciences Jenny McNulty.

The improvements for students go beyond the technological enhancements, McNulty said, and she's excited to see the next phase of improvements begin in December.

"It's the whole setting. It's a nice environment," McNulty said.

Come winter session, the noisy part of the next round of construction will begin, and the project is slated to take some six months. The college will redo "the dungeon," a larger basement classroom, and it will also add an entrance and foyer.

"We're going to put a new entryway on the building so we can have our presence felt on the Oval," McNulty said.

Comma-Q and CTA Architects Engineers, both of Bozeman, did the architecture, and Dennis Lower did the construction.

The college held focus groups with students, faculty and staff to get feedback on the renovation, and the message from students was grim, McNulty said.

"We get out of that building as fast as we can," she summarized.

It isn't a place to gather and collaborate yet, but it will be once the next phase is complete, she said. In addition to a foyer on the main floor, the students will have a lounge on the second floor, and possibly a coffee cart; the third floor will have a quieter student and faculty space.

Walls in the lounges will have "IdeaPaint," a paint that serves as a dry-erase board.

The immediate phases of renovation are part of a large-scale long-range building plan also funded with the gift from the Ecks, McNulty said.

In the coming legislative session, the UM College of Humanities and Sciences is asking for $6.3 million to fix "critical building infrastructure needs," including ones required for compliance with the Americans with Disabilities Act. On the list are roofing, insulation, HVAC, plumbing, restrooms, electrical, and asbestos abatement.

"As state support is realized, Dennis and Gretchen Eck have pledged to join the State of Montana in supporting more classroom renovations in the building with an additional gift of $2.6 million," according to the college.

Writing 101 is taught in the building, as are history, political science, philosophy, languages and more. McNulty would like every student who spends four years at UM to have at least one course in one of the new classrooms.

"A lot of students come in and out, not just students who are majoring," she said.

In the 1980s, after the previous decade's energy crisis, UM stuccoed over the original windows. Bringing natural light back into the building is part of the remodel, McNulty said. At UM, she said, students should be able to see the autumn colors around the Oval and snow on the mountains from their classrooms.

"It's so beautiful to look out at our campus," she said.

UM will cut $1.8 million from budget to pay for new initiatives, many in enrollment

The University of Montana will cut at least $1.8 million from its 2017 general fund in order to pay for new initiatives, especially ones relat…