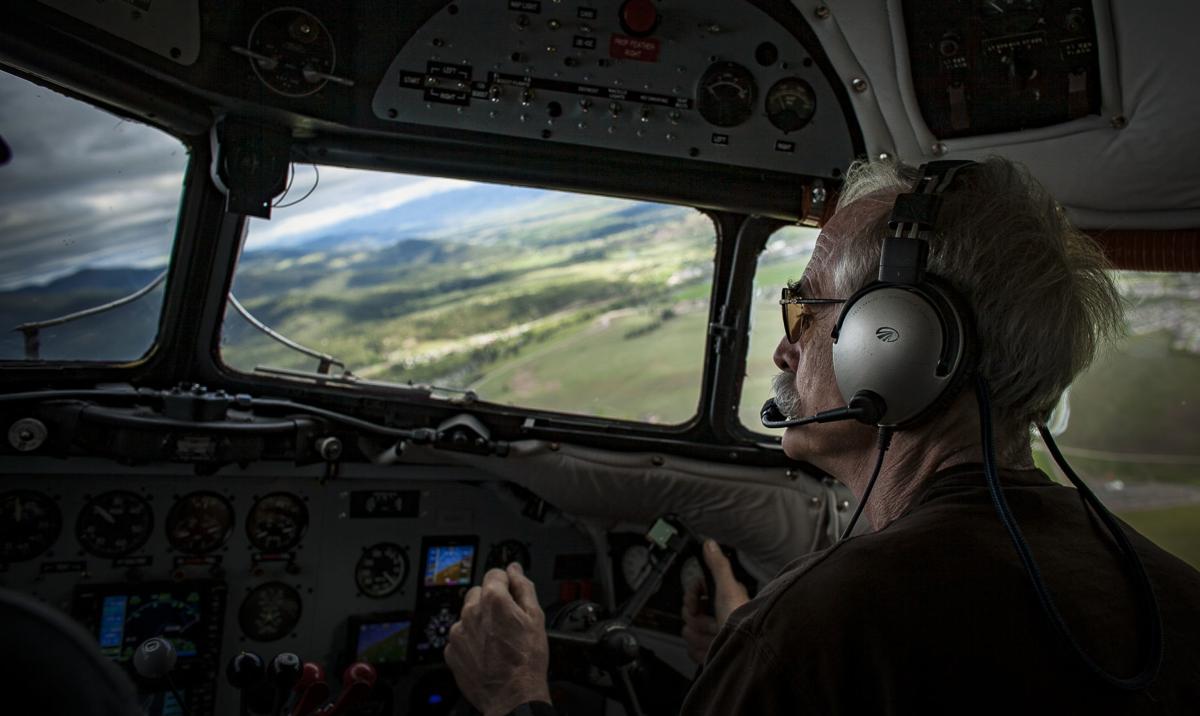 Chief pilot Jeff Whitesell brings the plane into a turn over the southwest side of Missoula to head back north toward the airport midway through the Sunday morning test flight. 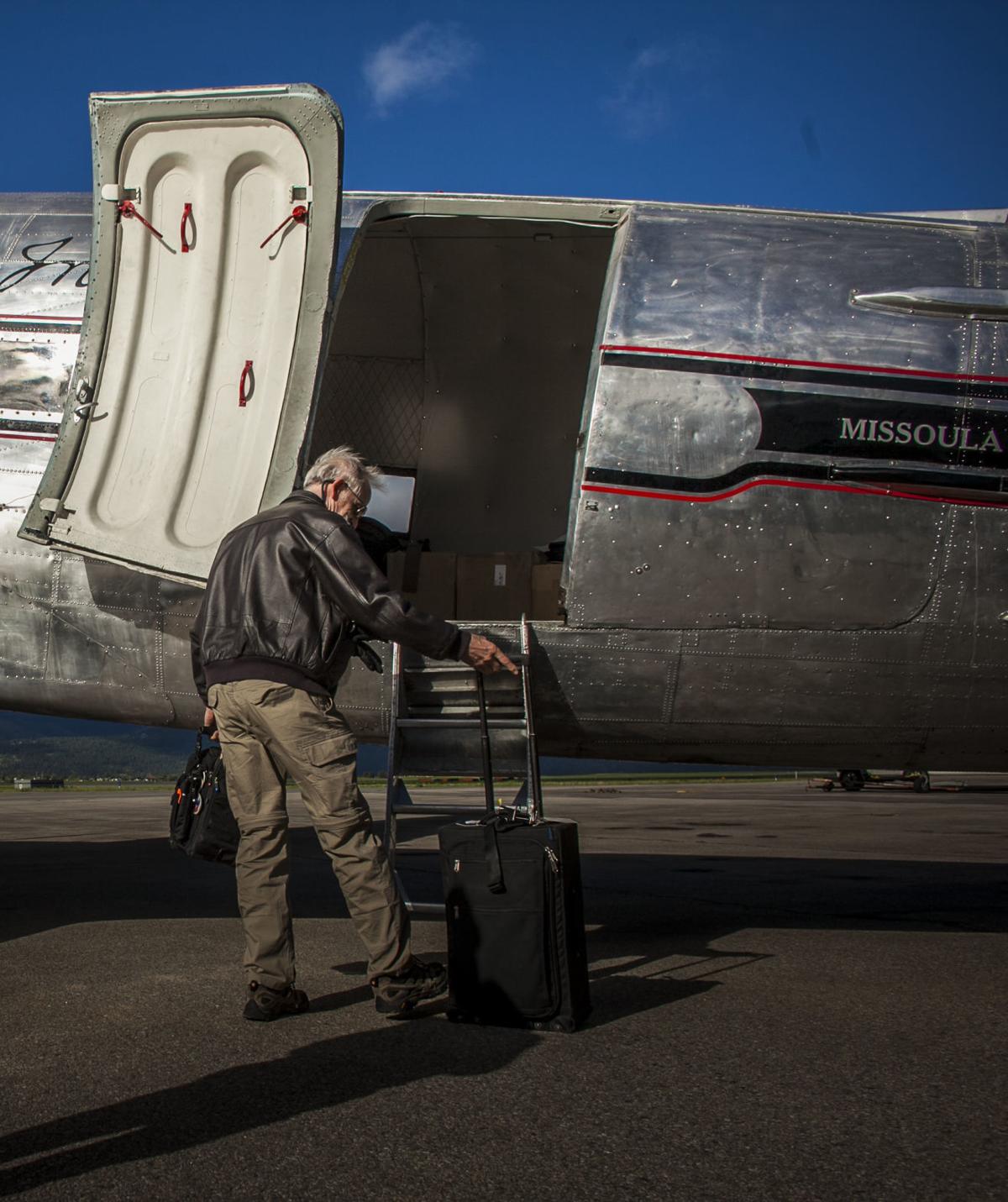 Miss Montana Chief Pilot Jeff Whitesell loads his personal gear into the plane after finishing a quick test flight above Missoula Sunday morning around 8. During the test flight, Whitesell checked that recent adjustments were OK and that all was good for Sunday's longer flight. 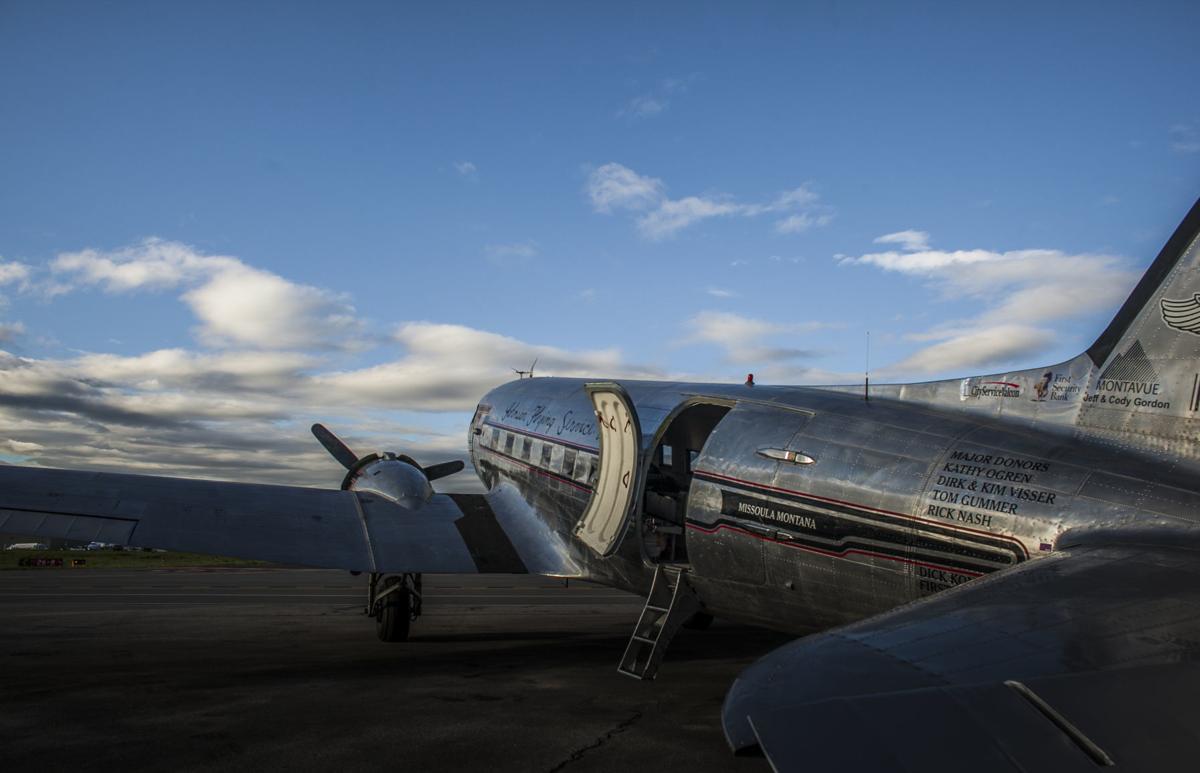 Miss Montana waits on the tarmac outside the Museum of Mountain Flying while crew load supplies and gear before the brief test flight May 19 around 8 a.m. Miss Montana will join presidential flyover in France on Thursday to commemorate the 75th anniversary of the D-Day landings.

Chief pilot Jeff Whitesell brings the plane into a turn over the southwest side of Missoula to head back north toward the airport midway through the Sunday morning test flight.

Miss Montana Chief Pilot Jeff Whitesell loads his personal gear into the plane after finishing a quick test flight above Missoula Sunday morning around 8. During the test flight, Whitesell checked that recent adjustments were OK and that all was good for Sunday's longer flight.

Miss Montana waits on the tarmac outside the Museum of Mountain Flying while crew load supplies and gear before the brief test flight May 19 around 8 a.m. Miss Montana will join presidential flyover in France on Thursday to commemorate the 75th anniversary of the D-Day landings.

After a year of work and worry, perspiration and inspiration, Miss Montana took to the sky Sunday morning bound for Normandy.

With fair weather finally ahead, a crew of six climbed aboard the former Johnson Flying Service DC-3/C-47 airplane, circled Missoula once, made a low pass over the airport and disappeared to the east through Hellgate Canyon shortly after 11 a.m.

Eric Komberec, project director, was in the copilot seat alongside chief pilot Jeff Whitesell. Also on the first leg were pilots Bryan Douglass and Nico Von Pronay and mechanics/emergency medical technicians Randy and Crystal Schonemann. Another pilot, Art Dykstra, has some pilot instructions to perform and will join the crew in Connecticut in a couple of days.

Takeoff from Missoula International Airport was at 10:48 a.m. — 6:48 p.m. in France. Miss Montana flew to the east over Missoula, circled to the left and west over the Frenchtown Valley, then lumbered back over the runway at low altitude for one last hurrah. Spectators waved and those on board did the same.

“This is proof that if you set your mind to it and have a goal, dreams can become a reality,” Komberec said before he boarded outside the hangar at the Museum of Mountain Flying. “This was done by a team effort. Not any one of us could have made this happen, but as a group we’re strong, and this is just the beginning.

“We’re going to go over there, be safe, and make Montana and everybody who helped us get this thing in the air proud, and come back and spend some time flying around the state in celebration.”

Will they make it?

He stepped off a 20-minute “shakedown flight” over Missoula and Frenchtown earlier in the morning brimming with confidence.

“All the signs are that she’s happy,” Schonemann said. “The numbers look good and she’s flying well so I have no reason to think anything other than we’ll be there.”

“We’ve done the due diligence a couple of times over. The rest is up to Mother Nature and Lady Fate,” Whitesell said.

The airplane's route took it north of Helena and south of Great Falls before landing to refuel in Miles City at 1:30 p.m.

"A few people online noticed we flew over Mann Gulch on our way," Douglass texted from Miles City. "It wasn't an accident."

Plans are in the works to revisit the site of the 1949 Mann Gulch fire, where 13 men lost their lives, 12 of them smokejumpers who jumped from the plane now known as Miss Montana.

You can track Miss Montana's progress across the U.S. on findmespot.com. The link is shared on the Facebook page "Miss Montana to Normandy."

Skip Alderson of Terrebonne, Oregon, was on hand for Sunday’s sendoff. He’ll be on the Miss Montana ground crew once the airplane gets to England. But he was in the pilot’s seat of N24320 on its last overseas flight for Bob Johnson and Missoula-based Johnson Flying Service in 1975, a few months before Johnson’s sale to Evergreen International was finalized.

Part of the route in ’75 coincided with Miss Montana’s in the next week, with stops planned in Greenland, Iceland, Scotland and the London area of England.

“What would Bob Johnson say today?” Alderson said. “Be careful, boys. Have a good flight. Bob … bless his heart.”

Alderson gazed fondly on his old plane, glistening on the ramp outside the museum hangar and decked out in the past nine months with an updated cockpit and new wiring, electronics, hydraulic system, landing gear and brakes.

“The avionics, the navigation equipment is just incredible. I was thinking of Lindbergh a few times when I was crossing (the Atlantic),” Alderson said. “I had problems with things like compass and avionics, but you know what? That ol’ girl, the airplane itself, she was sweet."

After several days of delay, word of mouth and Facebook drew about 30 people to the flying museum for the takeoff. Most were among the many volunteers who dropped in over the fall, winter and spring to help out, some arranging their vacations and school breaks around the work.

They held phones and cameras high as the iconic airplane began rolling down the ramp. It disappeared from view for 15 minutes before word came from the tower by way of a two-way radio that it was cleared for takeoff. It came racing eastward down the runway and lifted off with disarming grace.

The onlookers watched in almost reverent silence as Miss Montana headed to Normandy.

“Look out, world, here comes Montana,” said Steve Smith, a founding member of the Museum of Mountain Flying whose book “Flying the Biggest Piece Back” is a history of Johnson Flying Service.

“I’ll take off my coat and you can count the goosebumps on my back.”

Photos: Miss Montana in the air

More memories are in store overseas, but parachutists with the Miss Montana to Normandy project have a bright one to tuck away.