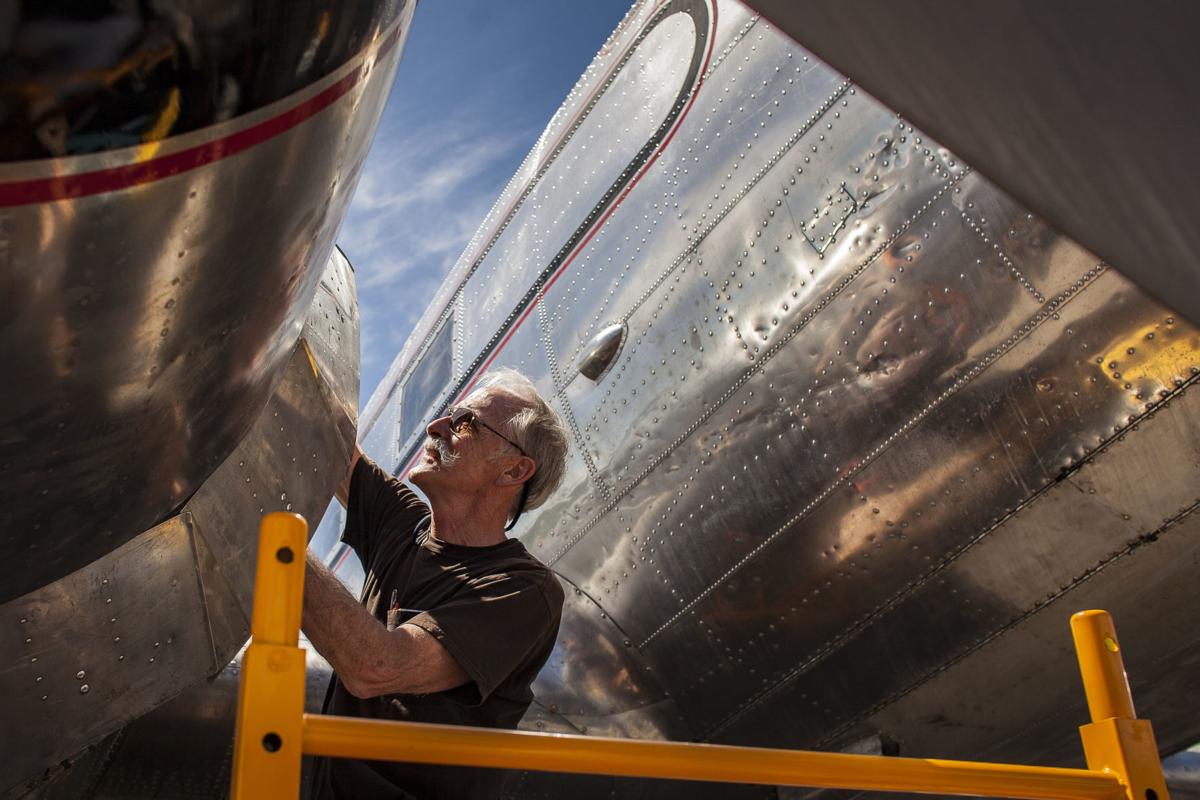 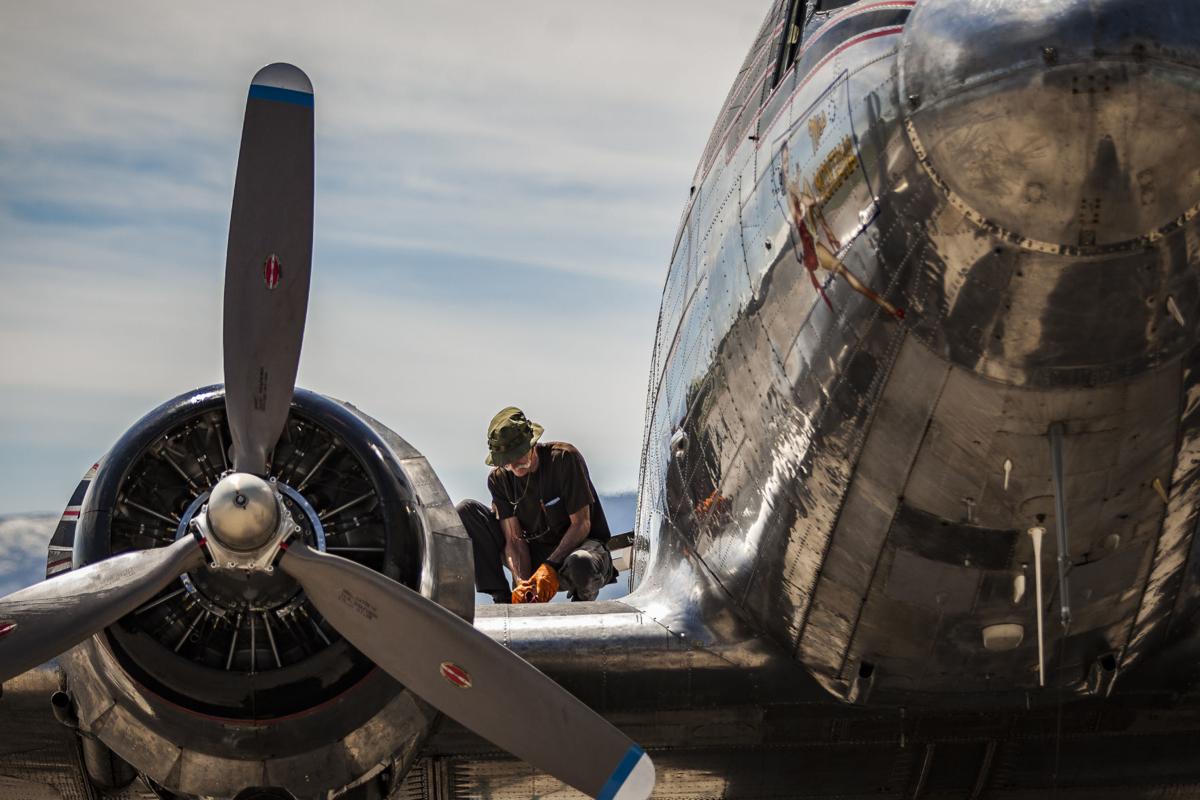 Miss Montana pilot Jeff Whitesell, known affectionately as "El Jefe," makes last-minute checks to the airplane before its second test flight at the Museum of Mountain Flying on Monday.

The “new” Miss Montana airplane garnered nothing but raves Sunday as she circled the sun-soaked Missoula Valley for 18 minutes at around 5:30 p.m.

The flight of the Museum of Mountain Flying’s historic DC-3 airplane, its first since 2001, went without a hitch.

“Unqualified success would come to mind, not to mention a total feeling of fulfillment for all of us because we’ve all worked so very, very hard for this to happen,” Jeff Whitesell said as he prepared for a second, longer test flight Monday.

Whitesell, of Southern California and Seattle, retired from Delta Airlines less than two weeks ago after a 40-year piloting career. He was in the captain’s seat Sunday and will be chief pilot for Miss Montana when the historic DC-3/C-47 takes flight later this week for Normandy and the 75th anniversary of D-Day on June 5-6.

Departure date is still not set for sure, though project organizers say they’re shooting for Wednesday or Thursday. They’ll hop across the country to Oxford, Connecticut, over two days to join the rest of the 14 or so DC-3s in America’s D-Day Squadron.

Bryan Douglass, logistics director for the project, said his goal is to reach Connecticut no later than Saturday to participate in a formation flight down the Hudson River for a flyover of the Statue of Liberty. The squadron leaves the next day, May 19, from the Oxford-Waterbury airport in Connecticut and heads across the North Atlantic along the original Blue Spruce route to England.

Whitesell was joined in the cockpit Sunday by pilot Frank Moss of Florida, who’ll be piloting a Swiss-owned C-47 to the Normandy event. Randy Schonemann, the mechanic from Neptune Aviation who has led the restoration of the 1944 plane for the past 11 months, was also on board.

“Those guys did an absolutely fantastic job,” Whitesell said. “It’s a handful flying a new airplane with new engine and new parts.

Videographer Eric Ristau’s crew, which has been tracking the progress of Miss Montana’s restoration, followed in a chaser helicopter, recording the milestone flight.

A 20-mph wind from the west came up in the afternoon and Miss Montana took off into its maw.

“Everyone (on the ground) said the tail came up so fast,” Whitesell said. “She just leaped off the ground. She was ready to fly before I was. We just put up the gear and we were off.”

The airplane circled the airport, and with everything checking out, took a wider orbit over Missoula before making a low pass over the airport. While air time was 18 minutes, the “chock to chock” time — when Miss Montana moved under her own power until she came to rest at the end — was closer to an hour, Whitesell said.

Douglass said the smooth flight was a reflection of the fastidiousness shown by Schonemann, Whitesell and the rest of their volunteer workers under mounting pressure to see air beneath the wheels.

“They tell me every test you do during a flight period, you come away with a stack of things you need to do,” Douglass said. “That we really didn’t have that at all speaks to the fact they did so much right for so long.”

The main post-flight fix was to adjust the RPMs on the propeller governor, Whitesell said. He was busy doing that late Monday morning, and Miss Montana left the runway at Missoula International Airport for its second flight at 2:30 p.m.

This time Eric Komberec, who with Douglass hatched the plan to take the Missoula smokejumper plane to Normandy, was in the right seat next to Whitesell and in front of Schonemann. Komberec watched Sunday’s initial launch from near the runway with his family.

“Now the fun begins,” said Komberec before climbing on board.

He’s one of half a dozen seasoned pilots who obtained their certification on DC-3s from Moss in the past 10 days.

Miss Montana’s departure for the East Coast to join the D-Day Squadron in Connecticut remains in flux.

“We’ve got some things to do between now and then,” Douglass said. “We’re going to try to have team meetings every four hours, at 8, noon and 4 in the afternoon to get on the same page about what needs to be done.”

Several parachutists, including two from Texas, have been waiting to take their requisite jump from Miss Montana, said Al Charters, who’s heading up organization of 15 men and women who’ll jump from the plane in England and France. Charters on Monday was trying to get assurance that they could get their jumps in Tuesday morning, before predicted winds come up.

That’s the tentative plan “if we can get it all together,” Douglass said.

With their star aircraft put to bed after Sunday evening's flight, workers and a few supporters took a rare respite.

"It was a fun thing for everybody," Whitesell said. "I said let's just stand down for awhile. We left the hangar door open and just sat around and talked, drank some good beer and watched the sun set."

All in the family: Enman's 'Miss Montana' flies again

They met in Drummond at a high school dance.

A long time ago: Lolo veteran was on Utah Beach on D-Day 1944

LOLO — Some details are gone from memory. Even 75 years later, some are too tender to talk about.

That smoke you see in the Rattlesnake? It's a controlled a burn.

An outbreak of pertussis, or whooping cough, in Missoula County has spread across the public schools, with reports of vaccinated and unvaccina…

Montana's Steve Bullock announced early Tuesday morning that he is running for president in the upcoming 2020 election. Here's our coverage.

Miss Montana’s adventure to Normandy didn't start Thursday, and with the weather outlook it may be a few days before it does.

Miss Montana pilot Jeff Whitesell, known affectionately as "El Jefe," makes last-minute checks to the airplane before its second test flight at the Museum of Mountain Flying on Monday.