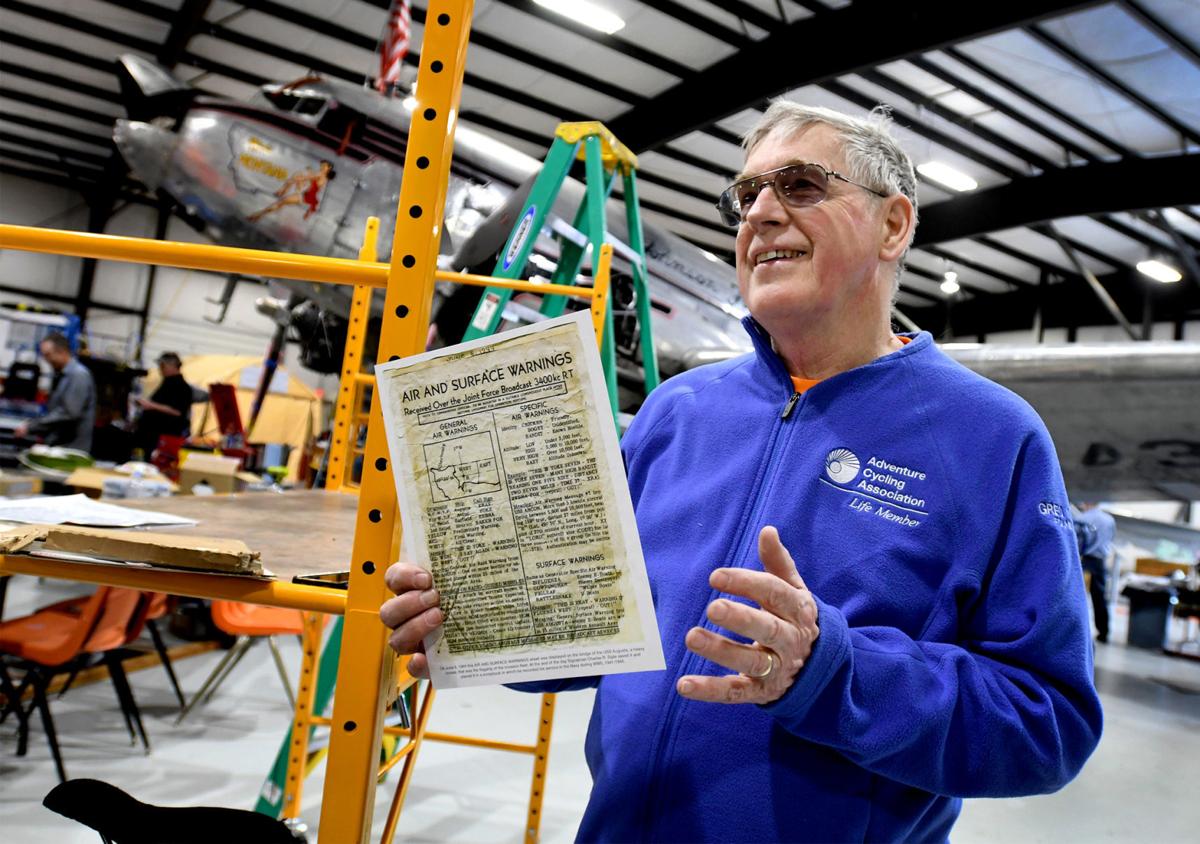 Greg Siple holds a flyer his father kept in a wartime scrapbook that details code words used to identify enemy threats. It was taped to the signal bridge of the USS Augusta for the D-Day invasion. Siple brought the relic to the directors of the "Miss Montana" project on Friday to take with them on the flight to Normandy. 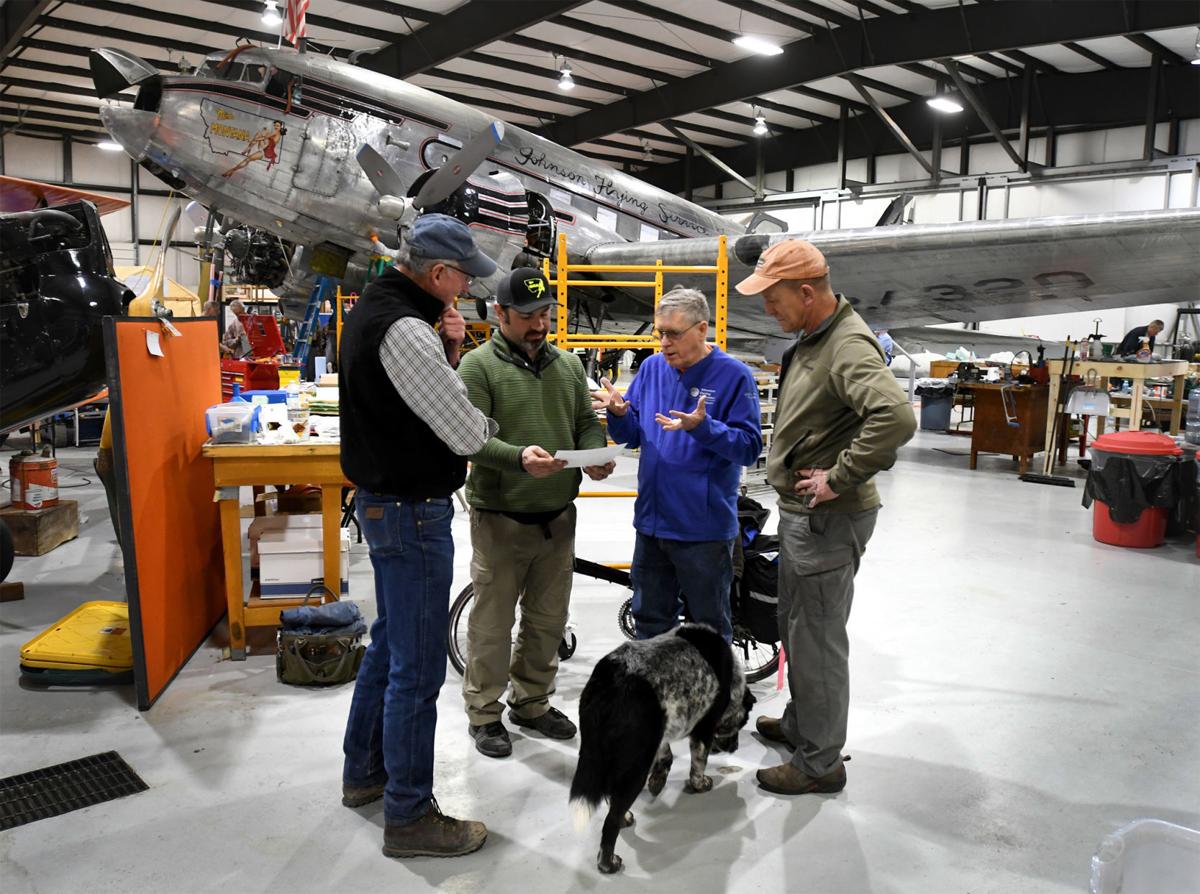 Greg Siple rode a bicycle out to the Missoula airport Friday morning. There he wove another strand into the amazing web of connections to the Miss Montana to Normandy project.

Siple, 73, and his wife June walked into a beehive of activity that has characterized the Museum of Mountain Flying hangar for months. Volunteers are preparing the historic Johnson Flying Service DC-3/C-47 that’s been branded “Miss Montana” to fly to Europe next month for commemorations on the 75th anniversary of D-Day in France and the 70th anniversary of the Berlin Airlift.

The Siples brought with them a unique relic, a one-page flyer labeled “Air and Surface Warnings.”

It came from a wartime scrapbook Greg’s father passed on to him in the years before Chuck Siple died in 2013. The elder Siple was a signalman on the USS Augusta, the flagship for the Western Task Force on D-Day under command of Rear Admiral Alan Kirk, with Gen. Omar Bradley aboard to command the U.S. First Army in France.

The flyer had been taped to a bulkhead of the Augusta’s signal bridge when the D-Day invasion was underway in the predawn hours of June 6, 1944.

At the end of day, Greg Siple said, his father took the paper off the wall and tucked it away as a souvenir.

“I realized this is a relic, an important relic,” he told Bryan Douglass and Eric Komberec, co-directors of the Miss Montana project. “When I saw what was happening out here, I thought it would be a grand thing to go along with you.”

But the flyer wasn’t the only thing Chuck Siple tucked away on the Augusta, and that’s where the Missoula connections get intriguing.

Chuck Siple grew up near Pittsburgh, Pennsylvania, and enlisted in the Navy on Dec. 8, 1941, the day the U.S. joined World War II after the Japanese attacked Pearl Harbor in Hawaii. He spent most of the war on the Augusta.

The heavy cruiser, which had carried Gen. George Patton to the North Africa invasion in 1942, was moored at Plymouth on the south shore of England in the weeks before D-Day. A bicycle enthusiast since boyhood, Chuck Siple was in Plymouth on liberty one afternoon when he met a man who owned a bike shop.

He asked if he could buy a bike to use during his liberties, but at first the man refused, citing red tape and war-time shortages. But by the close of the evening the shop owner agreed to arrange for a purchase “if I would keep quiet about it,” Chuck Siple wrote in his memoirs.

He became the proud owner of what he described as “a standard utility bike, with up-right bars, a jet black frame and white plastic fenders.”

“I was happy with it, and off I went about Plymouth on my first bicycle liberty,” Siple wrote. “What a joy!”

“The English countryside is especially beautiful in the spring, and I felt privileged to see a little more of it than my shipmates,” Siple recalled.

Chuck Siple knew such freedom would come to an end when the Augusta was put to work, whenever and wherever that would be. He didn’t want to leave the bike behind, and he described how he finally smuggled it on board.

Siple guessed correctly when his last liberty would be, and that night rode the bicycle to the dock and squeezed it onto the final launch for the ride back to the ship. His allies were darkness and a boatload of drunken sailors. On the Augusta, he was met and questioned about the bike by a young Officer of the Deck but caught his lucky break. A slugfest broke out on the other side of the well deck between a Marine and a returning sailor. The officer turned his attention to the fight and Siple slipped below decks with the bike.

He hid it first in a boiler intake near his living quarters, putting it out of his mind when the Augusta slipped its moorings on the afternoon of June 5 and headed for the beaches of Normandy. After the invasion he found a better hiding place, putting pieces of the bike in a bag that held replacement signal flags. There it stayed until the Augusta reached Philadelphia.

“On my first liberty I rode it into town and shipped it home to Pittsburgh,” Siple wrote. He rode his “D-Day bicycle” for several years after he was discharged.

Greg Siple came along in January 1946, in the earliest wave of Baby Boomers. When he outgrew his first tricycle, Dad traded the black English bicycle for a shiny new trike.

“I can hardly remember it, and only recently I found a picture of it,” Greg said Friday. “I’m in a Hopalong Cassidy suit, aiming a gun, and there’s a garbage can right there with the tricycle behind it. You can only see the back half of it. I don’t know whatever happened to it. It’s too bad he didn’t keep it.”

But Chuck Siple left his son something more important: A deep affection for cycling long distances. Greg was 16 in 1962 when the two of them pedaled 210 miles from their home in Columbus, Ohio, to Portsmouth and back. The jaunt soon morphed into the popular Tour of the Scioto River Valley. Come Mother’s Day some 1,500 riders will hit the road for the 58th edition of the original TOSRV.

Ten years later, Greg and June Siple hitchhiked to Missoula where Ohio friends Dan and Lys Burden were going to school. The Burdens had started TOSRV West, the Tour of the Swan River Valley, in 1971. In 1973, the four of them were in the midst of an 18,000-mile, 2½-year bicycle tour called Hemistour from Alaska to Argentina. With the nation’s bicentennial coming up in 1976, they hit on the idea of organizing cross-country tours in the U.S. It was June Siple who came up with the name — Bikecentennial.

The dream came true. Bikecentennial set up its national headquarters at 430 N. Higgins. Eventually it became Adventure Cycling Association in the same block. By the time Siple retired on his 71st birthday in 2017, Adventure Cycling had grown to be the largest recreational bike touring organization in North America.

Siple, who inherited a love for art from his father as well, did the graphic work on the Bikecentennial maps. Under his art direction, Adventure Cycling’s newsletter grew into a full-color glossy magazine that lists him now as “art director emeritus.” June remains a contributing writer.

Chuck Siple’s story and a high-resolution copy of the flyer from the USS Augusta will be added to a binder of World War II stories and relics that are to accompany Miss Montana to Europe. Douglass asked for an electronic copy to be shared on the Miss Montana to Normandy website and Facebook page and offered to those who mastermind the D-Day Squadron and Daks Over Normandy social media outlets.

“You know what we need,” Komberec said only half-joking as he eyed Siple’s collapsible bike in the shadow of Miss Montana’s wing. “We need a few of those on the airplane to get around the airports we’ll be traveling to.”

Like most other things connected to the Miss Montana to Normandy project, what seems outlandish on the surface might end up real steel in the sky. It’s enough to make a cycling Siple proud.

From Polson to war and back: WWII paratrooper remembers D-Day

POLSON — His memories of D-Day come in fits and starts.

A pair of bodies lay sprawled across the floor behind the cockpit of an old airplane Friday at the Museum of Mountain Flying. They were fasten…

One tall display case stands empty this week in the new smokejumping history exhibit at the Museum of Mountain Flying.

She's in Missoula for some flight certification but for Kathryn Burnham there's more to it.

Preparing for takeoff: The making of Miss Montana to Normandy

The wild blue yonder will have to wait a couple of days for Miss Montana.

Greg Siple holds a flyer his father kept in a wartime scrapbook that details code words used to identify enemy threats. It was taped to the signal bridge of the USS Augusta for the D-Day invasion. Siple brought the relic to the directors of the "Miss Montana" project on Friday to take with them on the flight to Normandy.