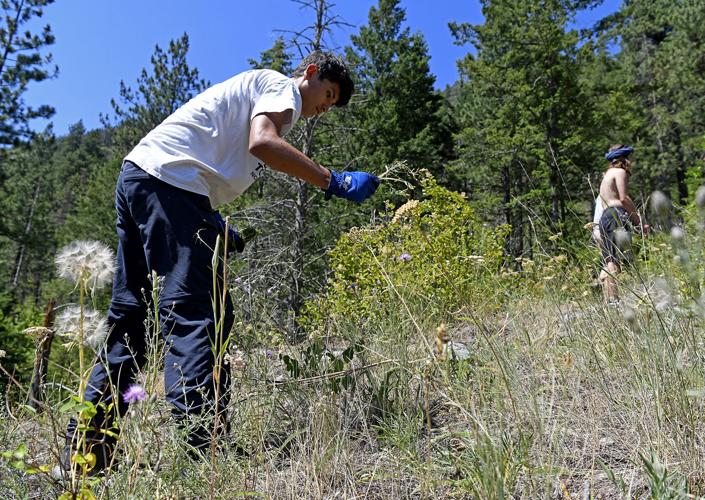 Dallas Swab pulls knapweed along the Mission Falls Trail with other members of the Mission Mountains Youth Crew on Tuesday. The youth crew is a conservation program that helps participants explore careers in conservation while they work on a variety of projects. 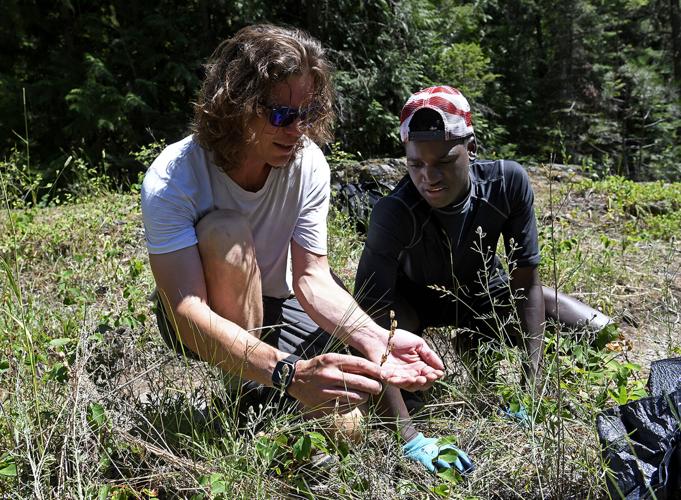 Rob Kenning shows Adlerson Watkins the seeds from a native camas plant on the Mission Falls Trail on Tuesday. 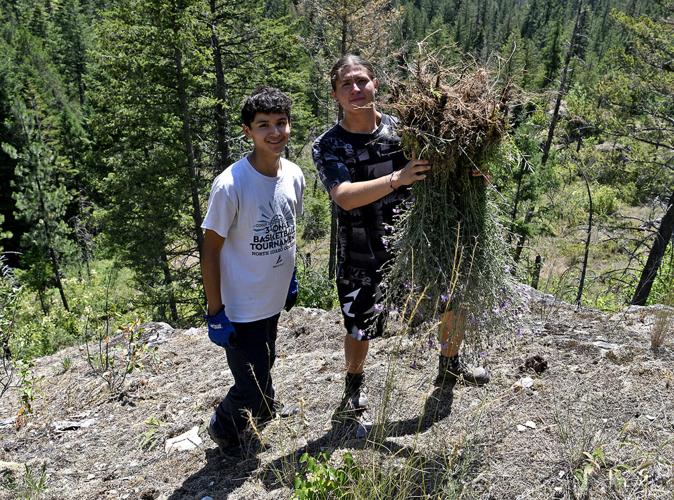 Sxwlekws Bell holds knapweed that he and Dallas Swab, left, pulled along the Mission Falls Trail on Tuesday.

ST. IGNATIUS — Weed pulling isn’t most teenagers’ favorite way to spend a hot summer day, but the members of the Mission Mountains Youth Crew dug in with gusto as they extracted invasive knapweed Tuesday from alongside the Mission Falls Trail in St. Ignatius.

“It’s one of the more physically demanding things we do, but it’s good,” said Maliek Genzel, a high school student who one day hopes to become a fish biologist.

Genzel is one of seven members in a competitive conservation program that wrapped up its seven-week duration this week. He and his peers participated in a wide variety of outdoor activities throughout the summer, including labor-intensive endeavors like weed pulling and more relaxing outings like a float trip to remove garbage from a waterway.

This was the second year of operation for the Mission Mountains Youth Crew, a collaborative paid program that seeks to engage Indigenous youth with their natural environment.

“This job opportunity is a great way to get outdoors and explore and make good money,” said Genzel.

By introducing students to industry professionals and Salish Kootenai College staff, the Mission Mountains Youth Crew aims to entice its participants toward careers in conservation.

Members of the program hope to become game wardens, biologists and anthropologists who work with environmental issues.

But forming their future plans was just one of the many benefits the youth crew took away from their seven weeks in the program.

The participants learned about nature and culture, all while enjoying their natural environment and earning money.

“This is the best job,” said 18-year-old Sxwlekws Bell, the group’s resident expert on traditional preparation of camas plants for consumption.

Bell explained the importance of removing invasive plants to the rest of the group before they set off on the Mission Falls Trail.

“This has been a fun summer,” agreed Bell’s friend Devin Quequesah, 17. Quequesah said his favorite activity of the summer was the group float trip.

Floating was 18-year-old Aleigha R. Spotted Eagle’s favorite memory from the program, too. But coming in at a close second, she said, was the chance to learn about her ancestors’ connection to the land.

“I wanted to go out and learn,” she said, instead of working a more typical summer job.

In addition to the cultural and environmental knowledge crew members got out of their participation in the program, they also brought home brand new Osprey backpacks donated by the gear company.

They gave back, too, by performing conservation work throughout western Montana. They not only pulled weeds, but also cleared trails, picked up garbage and cleaned trailheads.

Throughout the program, crew members also joined forces with programs like Upward Bound. The college preparatory program serves 87 students in seven schools across the Flathead Reservation.

Seven of those students made the foray into the forest to pull invasive knapweed on Tuesday. Together, the 14 high-schoolers filled an entire box of trash bags with the nefarious plant.

“I feel like I got a new family,” said Quequesah.

Indigenous people, groups and leaders are showing mixed reactions to Pope Francis’ apology, and many are calling for action and accountability.

Doulas offer physical and emotional support before, during and after birth.

The workshop was a partnership between Travelers' Rest, the Lolo Watershed Group and the WestSlope Chapter of Trout Unlimited, and included fly casting, tying flies, fish ecology and insect identification.

Homes between Dayton, Elmo and Big Arm were in various levels of evacuation preparation Friday evening.

24 Vietnamese students from North and South Vietnam joined 25 Montana teenagers to share their cultures and learn about the natural environment in each locale.

Their effort was part of a day-long initiative known as “Welcome Home Missoula."

Dallas Swab pulls knapweed along the Mission Falls Trail with other members of the Mission Mountains Youth Crew on Tuesday. The youth crew is a conservation program that helps participants explore careers in conservation while they work on a variety of projects.

Rob Kenning shows Adlerson Watkins the seeds from a native camas plant on the Mission Falls Trail on Tuesday.

Sxwlekws Bell holds knapweed that he and Dallas Swab, left, pulled along the Mission Falls Trail on Tuesday.