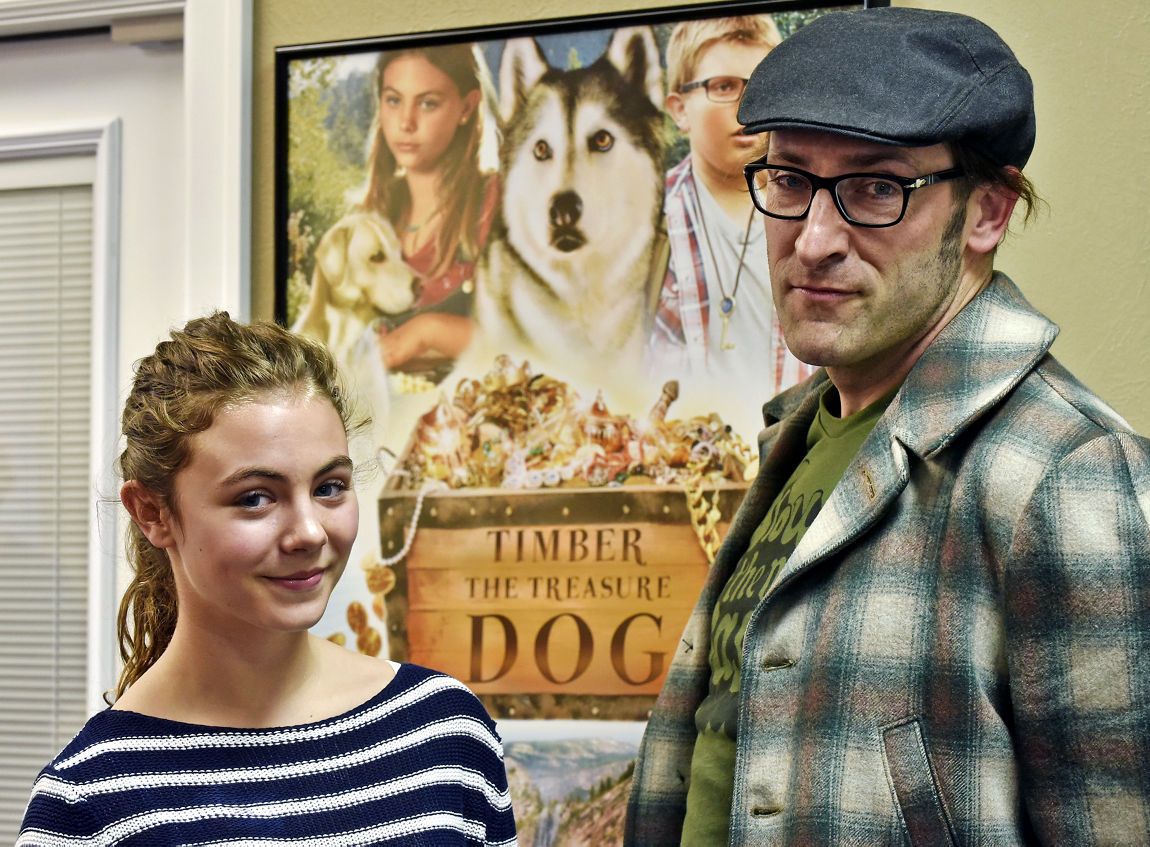 Local actors Averie South, a Missoula middle-schooler, and Jeff Medley both landed roles in “Timber the Treasure Dog,” a movie shot in the Paradise Valley by Bozeman-based writer, director and producer Ari Novak. The movie follows the adventures of two children trying to find a treasure to save a family ranch, aided by three canine friends as henchmen pursue them. 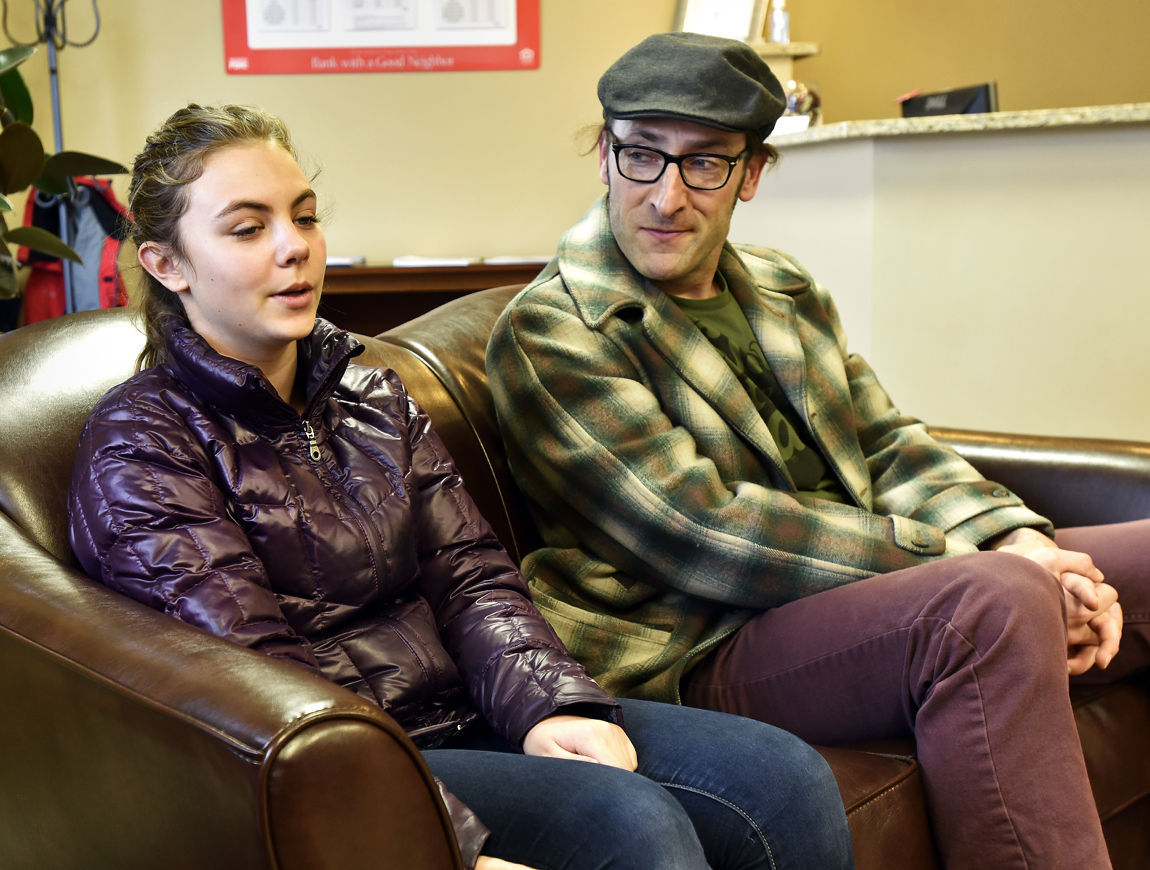 South had taken some performing arts classes when she auditioned and was chosen for the part in the movie. Medley regularly performs locally in theater and films, and auditioned for his part on a whim.

In film school, they told Ari Novak you should never make a movie with children or dogs.

Nevertheless, the Bozeman-based writer, director and producer included all three in his latest movie, "Timber the Treasure Dog," shot in the Paradise Valley in late summer and fall of 2014.

"Directing a dog is hard," Novak said. "Directing three dogs and two kids is really hard. But I gotta say, it was one of the most rewarding films I've ever done as well."

The children did their parts just fine, including Averie South, a Missoula middle-schooler who'd just turned 10 at the time of shooting.

She wasn't the only Missoula actor involved. Jeff Medley, a regular with local theater and films, snagged a role as a henchman.

What is his henchman pursuing? The titular treasure being sniffed out by Timber, an Alaskan husky and his new owner, Mikey Jones (played by 11-year-old J.D. Hoppe of Belgrade). Timber ended up in Mikey's hands courtesy of his grandfather, played by Wilford Brimley.

Mikey and his best friend, Billie (South), are seeking out the legendary bullion of Cloud Peak, which he needs to save his family's ranch from a tycoon who's buying up land in the area when the owners fall behind on payments.

The tycoon dispatches Medley and another goon after the children, "Home Alone" style, as Timber and the other animals (Barbeque, a bull dog, and Kaia, a golden retriever) talk among themselves, unbeknownst to the humans, and lead the way to financial security.

South had taken a Missoula Children's Theatre summer camp and put together a small, original theater project with friends arranged by her mom.

She was taking classes at On Center for the Performing Arts when she heard about the auditions for "Timber" at MCT.

She showed up, and guesses there were about 100 or more girls there – just a portion of the 400-some Novak auditioned across the state.

"I was mostly doing it for the experience, to just have fun, not really thinking I would get the part," she said.

Novak said South has "incredibly expressive eyes and an acting ability that really was well beyond her years."

In addition, South could read a line with subtext, which he said is difficult for most child actors and some adults.

South said she will pursue more acting roles if the opportunity arises.

Her favorite part of the shoot?

"Meeting the people. They were really cool," she said.

"Getting that full experience," Medley added. "Getting the pampering. Having the full costume/makeup lady getting you ready for the day."

South concurred as Medley went on.

"You know, feeling like a movie star. It's so fun. We had a good time," said Medley, who also has performed with South in the annual production of "The Nutcracker" for the past two years.

Medley went to the auditions on a whim. A friend wanted to go, and Medley was already headed to MCT for one of its biggest productions of that season.

"It was during 'Les Mis' and I was running late trying to get my stuff together. Luckily, they were right upstairs," he said.

Both Novak and his producers loved Medley's one-take audition and they offered him the role.

However, Medley would improvise lines that were keepers, and so his role kept expanding.

"Once in a while, they'd say, 'Let's just stick with the script.' But most of the time, they'd let me get away with taking liberties," Medley said.

"If he lived in L.A., he'd be one of the most sought-after character actors in the business," Novak said.

The shoot for a kids' adventure film had its own share of adventures: the rapidly changing and sometimes disagreeable Montana weather, veering from high heat to equipment-wrecking storms.

They got to shoot some scenes in mines and caves, and South got to use a stunt double for a cliff-jumping scene.

Novak studied film at New York University and then moved to Los Angeles. He initially worked in special effects on Hollywood films like "Live Free or Die Hard" before seguing into producing and directing sci-fi films. (He directed "Cowboys vs. Dinosaurs," which is exactly what the title promises.)

Novak first came to Montana in 2009 and began splitting his time between New York, Los Angeles and his current home base of Bozeman. He's shot five movies in the area now with his company, Oracle Film Group.

"Timber the Treasure Dog" came out at the beginning of the month through most any outlet you can imagine: Amazon, Walmart, Barnes and Noble, iTunes, Netflix on DVD, and via rental at Hastings.

They're also planning a screening at the Roxy Theater on Feb. 10, with potential for some matinees the following weekend.

A documentary screening at the Roxy Theater aims to help continue drawing attention to the issue of mass incarceration in the U.S., which has …

Pianist Tanya Gabrielian an idealist when it comes to music

Tanya Gabrielian, a Juilliard-trained classical musician, has played in a list of places that many young musicians dream of: Carnegie Hall, th…

At Missoula printmaker's studio, the art is in the experience

On First Friday, the most unconventional scene in Missoula's busy arts community is not far from downtown, on a discreet dead-end block on Haw…

Fans of "The Rocky Horror Show Live" can expect a few new twists and kinks in the cult classic this year, as the Montana Actors' Theatre prese…

After the Bollywood music cues up Lester, a foreman at a lumber mill, he grabs his love interest Lana St. Germaine and begins to dance, employ…

Local actors Averie South, a Missoula middle-schooler, and Jeff Medley both landed roles in “Timber the Treasure Dog,” a movie shot in the Paradise Valley by Bozeman-based writer, director and producer Ari Novak. The movie follows the adventures of two children trying to find a treasure to save a family ranch, aided by three canine friends as henchmen pursue them.

South had taken some performing arts classes when she auditioned and was chosen for the part in the movie. Medley regularly performs locally in theater and films, and auditioned for his part on a whim.