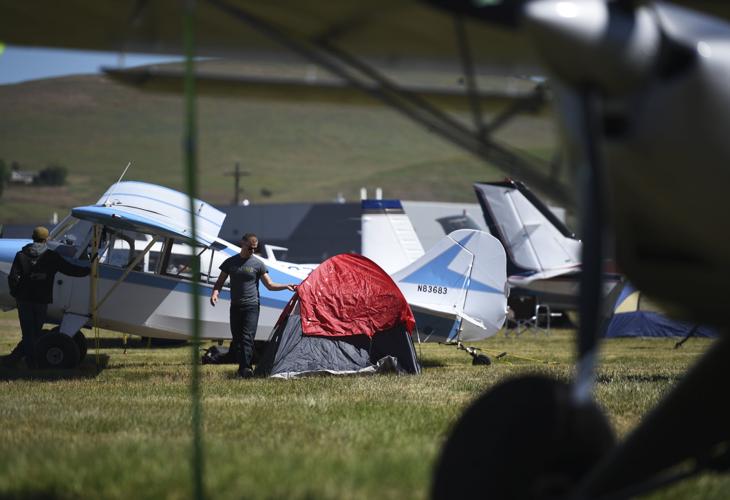 Isaiah Fee, left, and Jackson McDonald from Coeur d'Alene, Idaho, set up camp near their airplane Friday morning at the Missoula International Airport. Hundreds of pilots have flown in for the AOPA fly-in, many of them camping next to their planes. 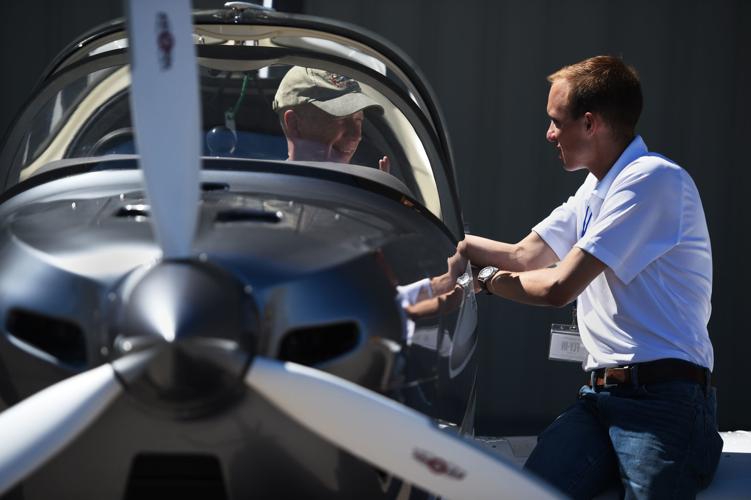 Michaela Hochella, right, talks to Brooks Dickerson about the new avionics inside a Delta Aviation light sport plane during Friday's AOPA fly-in event. Dickerson is one of many plane company representatives who flew in to talk to prospective customers at the event. 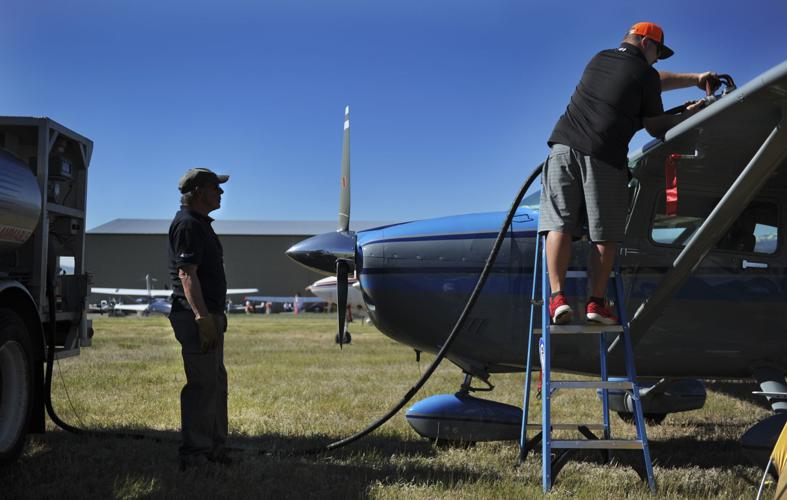 Cody Nickel, right, and Kevin McCann fuel a Cessna 182 while the pilot is off participating in fly-in activities. Nickel is a fueler at Glacier Jet Center in Kalispell and drove down to lend a hand with the event, as most volunteers aren't qualified to fuel planes.

Barry Bergeron was on a mission Friday morning.

A retired pilot for United Airlines, Bergeron and a friend had flown their Cessna 182 airplane from Bellingham, Washington, to the Missoula airport for this weekend’s Aircraft Owners and Pilots Association (AOPA) regional fly-in.

Now he was hurrying across the grounds for a look at the operations of Neptune Aviation, one of the U.S. Forest Service’s foremost providers of aerial fire-fighting tankers.

“I used to do fire-bombing in Canada before I worked at United,” Bergeron explained.

The skies were friendly and mostly blue, the sun was warming up, and already some 300 single-engines had arrived at the Northstar Jet/Neptune Aviation grounds for Montana's first AOPA fly-in. Many had camp tents set up under a wing, a familiar sight at these fly-ins.

It was perhaps the largest congregation of private planes ever assembled in Montana, though it looked like Saturday's bad-weather predictions were diminishing the numbers as feared.

Seventeen aircraft had winged northward toward the Chinese Wall in the Bob Marshall Wilderness before heading to Kalispell and a private airstrip at Crystal Lake near Fortine, where a visit to the Stonehenge Air Museum was planned. That was about half the number organizers had expected.

“We’re happy to be here, regardless of whatever record we break or don’t break,” said Joe Kildea, AOPA’s director of communications. “Everybody’s having a great time.”

Bergeron, clad in a worn, leather aviator vest, is a veteran of both flying and fly-ins. This is the fourth of the latter. The third was in Norman, Oklahoma, last September, where he received a prize of a $900 radio receiver for the farthest airplane to fly in.

“I turned around and sold it to pay for my gas,” he said.

He didn’t mention it, but last year Bergeron received the Wright Brothers Master Pilot award, the highest the Federal Aviation Administration gives out, for 50 years or more of incident-free and continuous flying. His flying partner, Dave Kriener of Bellingham, received the same award the year before.

Was he watching the forecast of a rainy weekend?

“Just for getting over here,” Bergeron said. “I figure once I’m here I’ll be here until the weather’s good enough to leave. I’m retired.”

Getting here was just a hop and skip compared to other aviation adventures, including island hopping in the Caribbean.

“We’ve taken this airplane to Russia over the Bering Strait,” Bergeron said.

“Because it’s there,” he replied with a smile.

Most of the serious general aviation pilots spent the morning and afternoon at registered workshops set up in open Northstar Jet hangars. They had titles like Aviation Photography, Owner Performed Maintenance, and Flying With Modern GPS. One of the more popular focused on backcountry flying — and landing.

“I know our members were very excited to come out here because this is one of the great places in the U.S. for backcountry flying,” Kildea said. “Montana is on a lot of pilots’ bucket lists, and I think this (fly-in) just gives them the opportunity to come here.”

AOPA, the largest aviation association in the world, estimates an economic boon of $680,000 to the Missoula area from the two-day fly-in.

“It exposes a lot of our pilots to the area, and they keep returning,” Kildea said. “These fly-ins are really a way to bring AOPA to where our members live, work and fly. And we hope folks from here come out and learn a little more about their airport and about aviation.”

Far is relative in general aviation, however. Aircraft from Tampa, Florida; Long Island, New York, are in Missoula for the weekend.

Mike Mower and Darryl Neidlinger rolled in from North Carolina after a week of backcountry flying in the Sawtooths of Idaho in a Helio Courier U-10, complete with a United States Air Force insignia on the tail — and a history.

Mower is director of aviation missions for JAARS, short for Jungle Aviation and Radio Services. It's a nonprofit that provides Bible translations to Third World countries with short landing strips. The U-10 that was wheeled to the static display row was built in 1961 and became the first purchased by the Air Force in 1962.

“It was used at Hurlburt Field in Florida to train air commando pilots who were going to fly them in Southeast Asia,” Mower said. “They actually trained Army and Air Force pilots.”

The most prominent aircraft of the static display at the fly-in took center stage Friday evening as the traditional Barnstormers party began.

Bryan Douglass and Barbara Komberec shared the stage with U.S. Sen. Steve Daines under the nose of the Museum of Mountain Flying’s “Mann Gulch plane" that dropped smokejumpers onto a deadly fire north of Helena in 1949.

Douglass and Eric Komberec, Barbara’s grandson, hatched the idea of fixing up the DC-3 and joining other C-47s on a trip to Europe next year to mark both the 75th anniversary of D-Day at Normandy and the 70th anniversary of the Berlin Airlift.

“It occurred to us that for this kind of historic mission she needs to be recognized, and recognizable. She needs a name,” Douglass told a crowd that included 95-year-old John Nelson of Lolo, who took part in the Normandy invasion.

The name Miss Montana was revealed a couple of weeks ago. But its significance and ties to World War II and the Normandy invasion in 1944 weren’t fully known until Friday.

It’s borrowed from a B-25 flown in three major campaigns in the Pacific during World War II by Capt. Malcolm “Mac” Enman of Drummond. Enman, who earned the Distinguished Flying Cross among other medals, was Barbara Komberec’s father and Eric’s grandfather.

A parachute over the front of the plane was removed to reveal an image that roughly mirrored the nose art of Mac Enman’s Miss Montana. Douglass pointed out that the young woman in the insignia holds a tiny set of Forest Service smokejumper wings.

“As caretakers of this historic plane, it's a serious consideration to change anything about her,” he said. “In fact, if her days of making history were over it would be unthinkable to change her at all. But we don’t believe she’s done making history. And we believe the best way to preserve an airplane and keep it dust- and rust-free is to fly it.

“I think you will agree it’s a perfect fit,” Douglass said. “A name that represents all of Montana, not just Missoula and not just the Museum of Mountain Flying, an historic name that has been battle-tested by a Montana aviator.”

Barbara Komberec said returning the plane to airworthiness and flying her to Normandy in 2019 will honor the 57,000 Montanans who served and the 1,500 who died in World War II, and the thousands of smokejumpers who have served the country as first responders to wildland fires.

"Mac brought honor to our family, to our country and to Montana by his service," she said. "We’re honored that the identity of Miss Montana will live through this historic plane as it goes on an historic mission."

An anonymous benefactor has pledged to match the first $100,000 of donations for the Miss Montana to Normandy project, which Douglass said if matched will bring the group at least halfway to its fundraising goal.

Miss Montana's new nose art has the same font type as the original.

“We want to put that history on this history,” Douglass said, “then fly her to Normandy and make new history.”

This story has been updated to correctly attribute certain quotes to Bryan Douglass.

Missoula entrepreneur launched a couple of ventures in one year

Erin Giefer launched two different ideas at the same time a couple of years ago, and the entrepreneur thinks of the ventures like this.

One tall display case stands empty this week in the new smokejumping history exhibit at the Museum of Mountain Flying.

In 1865, the Missoula City Band formed under the leadership of John Barnicort.

A line of single-engine planes taxied onto the runway at Missoula International Airport on Friday evening, the setting sun glinting off their wings.

It’s April and the smell of books is in the air.

This rare, complete Gorgosaurus fossil is about to be auctioned at Sotheby's in NYC

This rare, complete Gorgosaurus fossil is about to be auctioned at Sotheby's in NYC

Isaiah Fee, left, and Jackson McDonald from Coeur d'Alene, Idaho, set up camp near their airplane Friday morning at the Missoula International Airport. Hundreds of pilots have flown in for the AOPA fly-in, many of them camping next to their planes.

Michaela Hochella, right, talks to Brooks Dickerson about the new avionics inside a Delta Aviation light sport plane during Friday's AOPA fly-in event. Dickerson is one of many plane company representatives who flew in to talk to prospective customers at the event.

Cody Nickel, right, and Kevin McCann fuel a Cessna 182 while the pilot is off participating in fly-in activities. Nickel is a fueler at Glacier Jet Center in Kalispell and drove down to lend a hand with the event, as most volunteers aren't qualified to fuel planes.