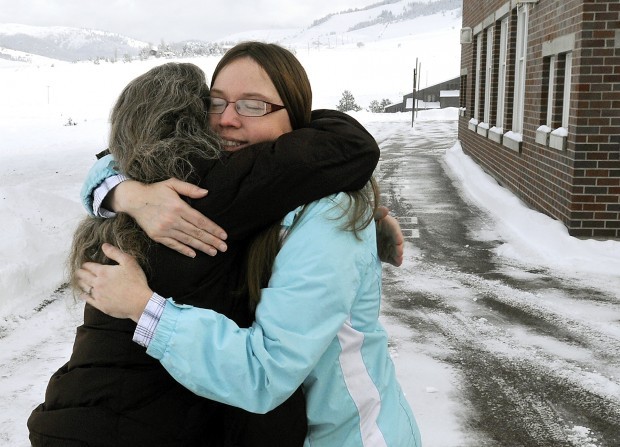 Laura Wildeboer, left, and Kara Doddema hug after meeting for the first time at Chief Charlo Elementary last week.  Wildeboer and her husband helped Doddema and her family at Christmas after the neighboring Missoula Alliance Church put out a call to its congregation to help students at the school. 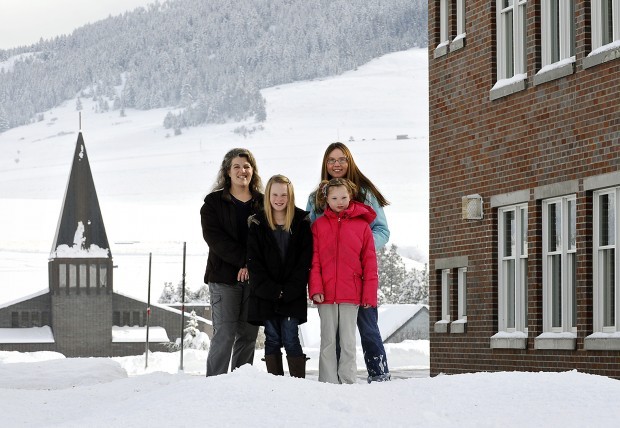 Laura Wildeboer, left, Kara Doddema and her daughters Kieran and Bridget, in red, stand on the grounds of Chief Charlo Elementary with Missoula Alliance Church in the background.  Wildeboer and her husband, who attend the church and have children who attended the school, gave gifts for Doddema’s entire family of eight at Christmas. 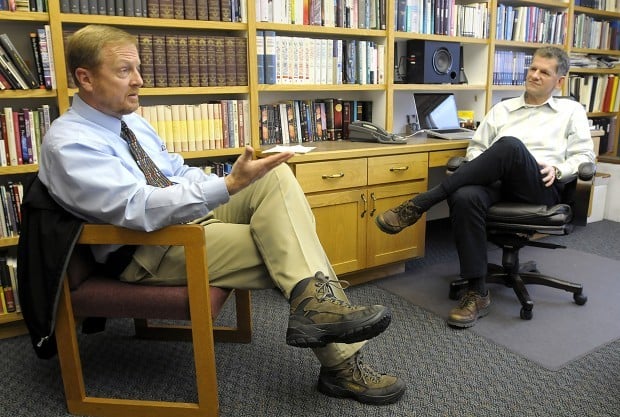 Chief Charlo principal David Rott, left, and Jeff Valentine, lead pastor at Missoula Alliance Church, discuss the unique relationship between the neighbors last week at the church. The church recently gave the public school a no-strings-attached gift of $20,000 to help students and their families with basic needs.

By JAMIE KELLY of the Missoulian

Serendipity and zoning laws made them neighbors, these two brick institutions overlooking the Missoula Valley from their perch on the South Hills.

Besides that, there are few similarities between them.

One is a house of worship, the other a public school. And the U.S. Constitution and a century of U.S. Supreme Court rulings dictate that they can never, ever be too cozy with each other - at least in terms of their missions.

But Jeff Valentine, lead pastor at the Missoula Alliance Church, has only one interest in reaching out to his neighbor, David Rott, principal at Chief Charlo Elementary.

"Jesus said love God, and the No. 2 thing is like the No. 1 thing, which is love your neighbor as yourself," said the pastor.

David Rott and the 370 children at his school are the secular recipients of the divine commandments taken to heart by the congregants next door. And though he doesn't speak in religious terminology when it comes to his relationship with Valentine and the church, Rott is almost breathless when he tries to say thank you for what the congregation has done for those children.

"This church community reached out to us in a very meaningful way," said Rott. "That's what's so powerful about it - the sense that we are not alone."

On Dec. 24, in a hushed Christmas Eve service at Missoula Alliance Church, the congregation was asked to make a donation for the neediest of Chief Charlo's children.

The donation plates made their way around. And they returned much heavier than when they started.

Laura Wildeboer and her husband Clarence have been attending Missoula Alliance Church for seven years. Their children have attended Chief Charlo.

In Wildeboer's mind, there is an inextricable link between the two institutions, if only because they are next-door neighbors.

"You look out the church windows, and you see the school," she said. "If you're in the parking lot, you can hear the kids playing."

Every Christmas, Valentine reminds his congregation that "love thy neighbor" sometimes means precisely what it says: Look out your window, see who is next door, and help if there is a need.

So the Wildeboers prayed about how they could help. In November, Rott addressed the congregation and urged them to "adopt" Chief Charlo families who were struggling during the holidays, needing coats, gloves, boots and food.

He knew that the church community might be able to help. After all, just three years before, the church raised $14,000 for the neediest at Franklin Elementary.

So Clarence and Laura Wildeboer went shopping for an anonymous family they had never met, buying dresses and coats and gift cards and a slew of other items for one Chief Charlo family.

They took their own children along.

"A lot of times at Christmas, everything is all about ‘me,' and I put that aside to say that we were shopping for someone else," she said. "Those are life lessons you can't give in any other way."

Shortly before Christmas, Kara Doddema got a phone call from Chief Charlo, where two of her six children go to school.

"We got the call that the Missoula Alliance Church wanted to help our family for Christmas," said Doddema, who is a pre-nursing student and whose husband Bernard is a disabled veteran. "That was pretty neat."

The Tuesday before Christmas, Doddema drove to Chief Charlo to pick up her gift.

It was stuffed with clothes and gift cards not for her two Chief Charlo children, but for her entire family, including presents for her and her husband.

On Friday, Kara Doddema and Laura Wildeboer finally met face to face for the first time at Chief Charlo. Doddema introduced Wildeboer to her daughters Kieran and Bridget, her two Chief Charlo children.

"Our family is so appreciative," she said, hugging the woman who gave her family a Christmas this year.

"From the bottom of our hearts," Wildeboer said.

The Missoula Alliance Church is a congregation of 1,200, and every Sunday roughly 800 of them attend Sunday services.

The church had been in service for more than a decade before Chief Charlo was built next door in the mid-1990s.

Quietly, the church had been giving to its neighbor and a host of charities for years. In 2008, however, right when the economy turned south, the congregation decided it needed to help the growing number of families falling into poverty.

That year, it raised $14,000 for Franklin Elementary, which consistently has among the highest percentage of students living in poverty in Missoula County.

Families can only do so much when income dries up, said Valentine. And the church saw that it was the teachers themselves who had to care for the children at school.

"What we learned from Franklin is that for these teachers, it's not just a job for them," he said. "They really love these kids."

The $14,000 donation came with no strings attached. Today, the school still has much of that money, and uses it to supply its family resource room, giving kids shoes and clothes and also parents a place to update their resumes or search for a job.

That year, Valentine also asked his flock to consider "adopting" families, especially during the holiday months, buying them Christmas gifts or essential items like clothes or even gas cards.

They did. But then, hearing that the growing number of children in poverty was affecting the families at Chief Charlo, Missoula Alliance Church turned to its left and began to focus its giving on the school next door.

"Neighbor" in biblical terms means all of humanity. But this congregation made the decision to consciously narrow that definition.

"David shared with us as a church that there are students with needs," said Valentine. "We didn't know exactly what those were, but here - just a stone's throw away from our own building - are children who have needs that they can't meet."

So the church faithful began adopting families and buying gifts for the neediest families. And on Christmas Eve, the plate-passing raised almost $20,000.

And as with Franklin, the money came with no strings attached. No proselytizing. No church committee to divvy up funds.

A check written to Chief Charlo, given to the school to help its children.

"I told them that we'll be entrusting this to Dave Rott, because he and his staff are closest to these kids," said Valentine.

Rott will assemble a small team to look at how best to spend the money, and will base all its decisions on the judgment of his teachers, who are closest to the parents and children.

Maybe food for a family struggling, or eyeglasses for a child who broke them.

"Some of them are simple things, but those things are life changing for these kids," said Rott. "It's the little things in life we have that we don't think about that are game-changers for some of these kids and families."

The fund will be a constant source for Chief Charlo's children and families.

The food and clothing and eyeglasses it will buy come with no Bible, no religious tracts, no required membership to the church next door.

From Valentine's point of view, the works in Christ's name are more powerful than any of those things, anyway.

"So often the church is known for what it's against," he said. "And I've been saying to our church, what are we for? Who are we for? Let's be about who we're for, and let's be about the things Jesus talked about - being present in a community and moving toward people in the spirit of love."

But he can thank his neighbors for living their faith, and he can thank them on behalf of the hundreds of children who walk into his doors every school day.

"Every bit of this has been about supporting families and kids, nonstop," he said. "To me there is no underlying purpose other than to do the mission of meeting the most basic needs.

Reporter Jamie Kelly can be reached at 523-5254 or at jkelly@missoulian.com.

Jasmine Lori Snyder, 39, is charged with possession of meth with intent to distribute.

A Utah developer who is part of the team that bought the Missoulian building is apologizing for offensive messages he sent to locals over Instagram this week.

An online petition opposing the development has garnered over 6,440 signatures.

"Despite what you may have read on social media, my magic wand does not allow me to pick and choose who buys and sells..." mayor John Engen said on Monday.

A planning meeting for a proposed $100 million redevelopment of the Missoulian site has been canceled due to insulting comments made by one of the investors in the project.

Casey James Deschamps, 25, is accused of leading Missoula police on a high-speed chase down Brooks Street on Tuesday afternoon.

Laura Wildeboer, left, and Kara Doddema hug after meeting for the first time at Chief Charlo Elementary last week.  Wildeboer and her husband helped Doddema and her family at Christmas after the neighboring Missoula Alliance Church put out a call to its congregation to help students at the school.

Laura Wildeboer, left, Kara Doddema and her daughters Kieran and Bridget, in red, stand on the grounds of Chief Charlo Elementary with Missoula Alliance Church in the background.  Wildeboer and her husband, who attend the church and have children who attended the school, gave gifts for Doddema’s entire family of eight at Christmas.

Chief Charlo principal David Rott, left, and Jeff Valentine, lead pastor at Missoula Alliance Church, discuss the unique relationship between the neighbors last week at the church. The church recently gave the public school a no-strings-attached gift of $20,000 to help students and their families with basic needs.