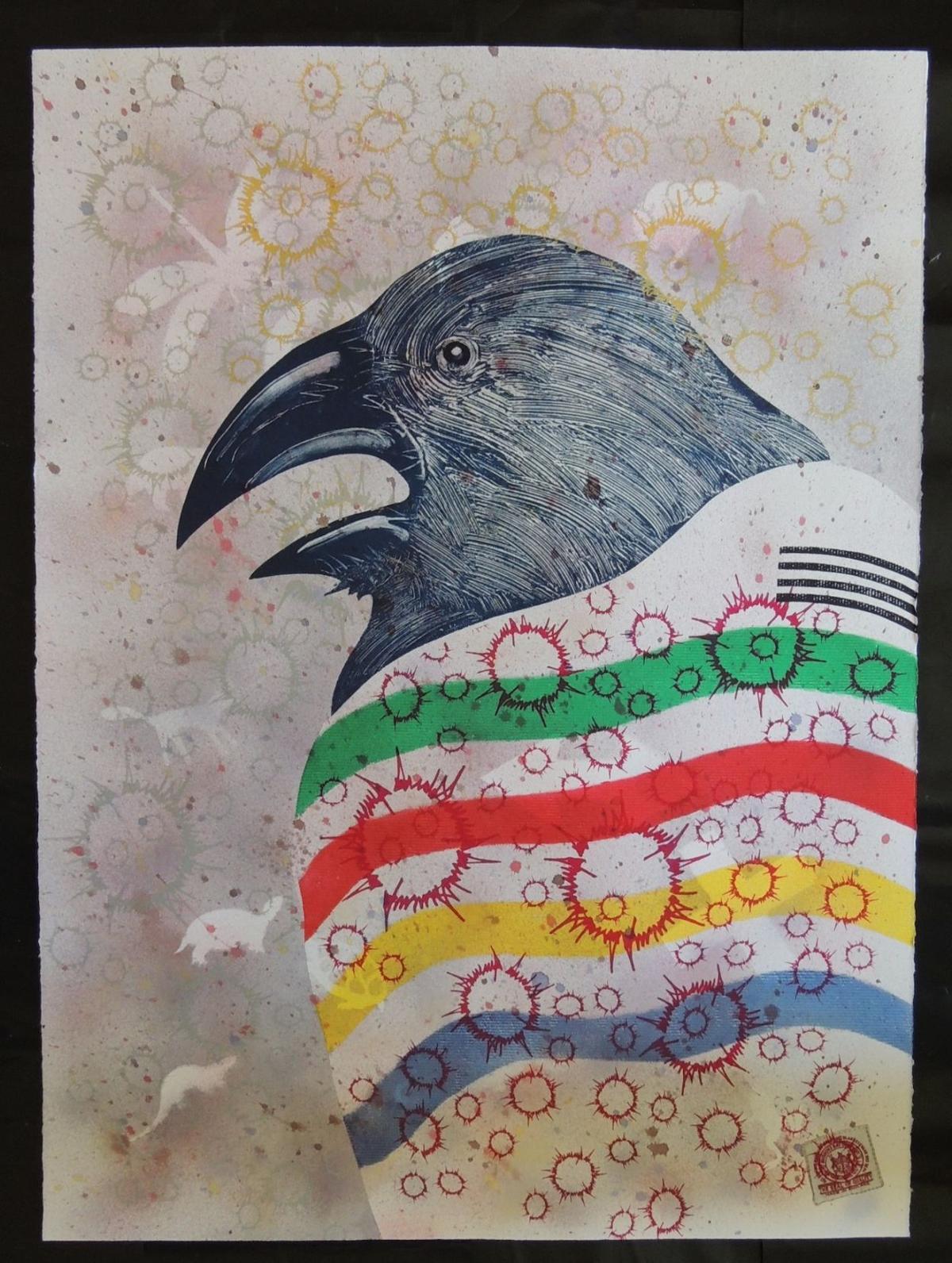 Corwin “Corky” Clairmont (Salish-Kootenai)'s print was the highest-selling piece at the Missoula Art Museum's "Big Night" art auction. The full title is “Raven Speaks to Friends: ‘The DJ Trump Virus is More Menacing and Deadly than Smallpox Blankets or the COVID 19 Virus’ Your Vote is the Cure.” 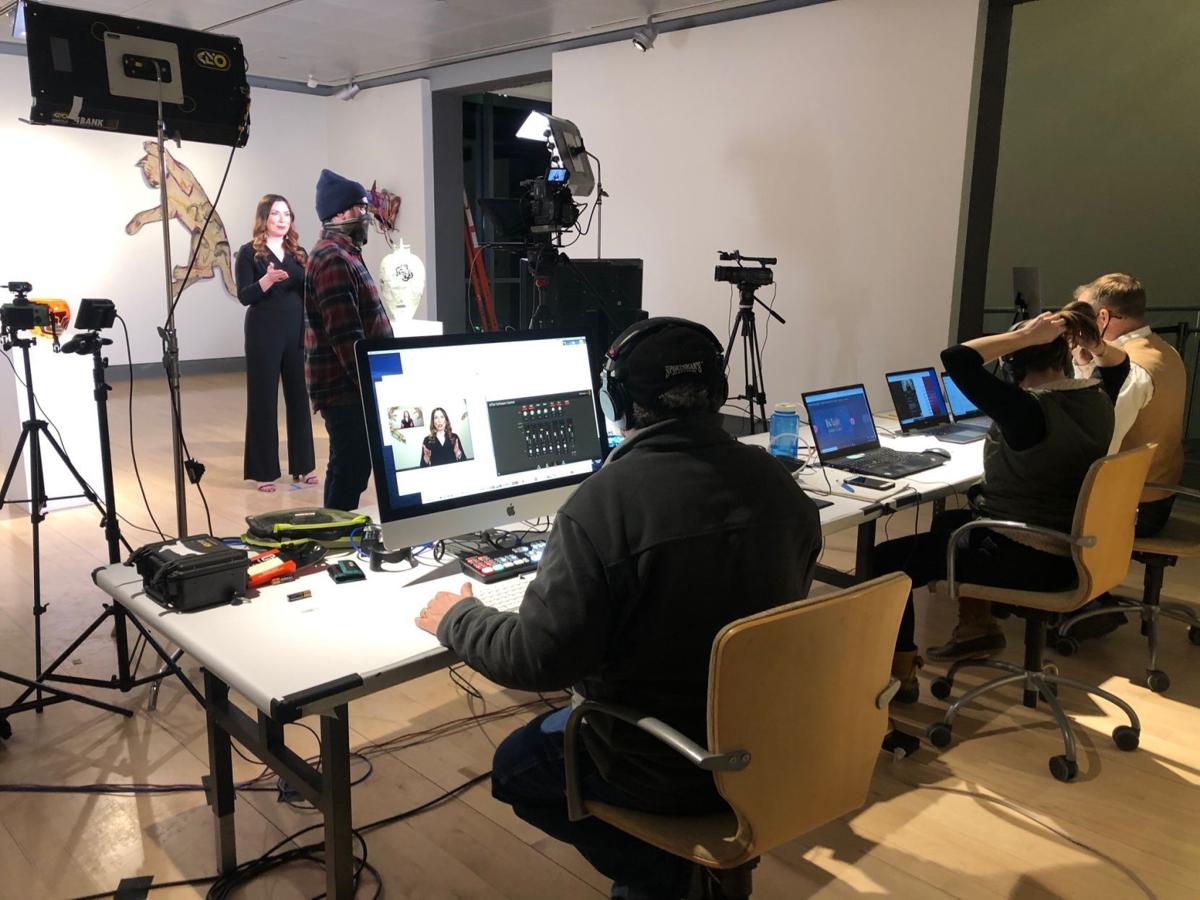 The fundraiser was livestreamed from the Missoula Art Museum's galleries last weekend.

While moving online could feel like “batting in the dark,” Executive Director Laura Millin said they were “surprised and delighted,” particularly with the “high level of participation from those who attended” the livestream.

It was broadcast from the MAM’s galleries, with prerecorded video spots and a live auctioneer, while viewers at home bid through Givergy.

The highest-selling piece was by Corwin “Corky” Clairmont, a Salish artist recognized around the U.S. and founder of the art program at Salish-Kootenai College.

His print has a long and politically pointed title: “Raven Speaks to Friends: ‘The DJ Trump Virus is More Menacing and Deadly than Smallpox Blankets or the COVID 19 Virus’ Your Vote is the Cure.” It depicts Raven wrapped in a blanket with loads of symbolism.

He took Trump’s distinct signature and bent it into a circle that resembles microscopic images of the coronavirus, which are seen throughout the print. As the auctioneer explained, the banded colors of the Hudson Bay blanket allude to smallpox blankets.

The piece sold for $4,050 after starting at $1,400. Other well-known Montana artists also sold work for above $3,000, including Monte Dolack, Gordon McConnell and Lisa Autio. A metal sculpture by Russell Smith, a Missoula artist who died last March at age 79, also exceeded that mark. From outside Montana, Northwest Indigenous artist Lillian Pitt’s vase also sold for more than $3,000.

One non-visual art item — a personalized dance performance by Bare Bait Dance, Missoula’s contemporary modern dance company, sold for $750. (Viewers got to see an original BBD dance, performed in the MAM gallery, during the livestream.)

Putting on a virtual auction was a “far cry” from the format their staff has honed over the years, Millin said.

Last year’s auction was held in its traditional way in its usual home — the University Center Ballroom, on the first night of February, before the pandemic hit. It raised $130,000.

For that event, MAM moved the entire silent auction to a digital platform that opened to bids before the event itself.

Since last March, organizations around Missoula have shifted major events, like auctions and film festivals, to virtual formats that might be entirely new to them and their audiences.

Millin said there was some apprehension and uncertainty about the move, a “feeling of batting in the dark.” However, their longtime auctioneer, Johnna Wells of Auction360 in Portland, Oregon, now has almost a year’s worth of experience with online events. She appeared live from the MAM gallery, surrounded by art pieces, introducing the artists and their work, plus video pieces including contributions from artists and supporters local and far away. They hired local production company Imagination Media to create a professional look and feel.

The livestream included music by local artists for a compilation, “Gettin’ Thru,” that was produced in collaboration with the Montana Area Music Association, a nonprofit that supports and advocates for musicians.

One benefit of going virtual was a wider audience. Their registrations show people from Oregon, Idaho, Washington, Maryland, Washington D.C., Tennessee, Virginia, Georgia, Canada and more. They added up to 342 registered bidders, 61% of whom donated or placed a bid. (Donations are still coming in the week after the event.) The livestream itself drew 346 “screens,” which likely could mean as many as 600 viewers.

Pieces are donated at 50% to 100% depending on the artist. The art auction is the museum’s largest fundraiser of the year, helping to keep its admission free and funding educational efforts like the Fifth Grade Art Experience.

“We feel that in many ways, the successful outcome from the auction really positions us well in terms of the year ahead,” Millin said. “We have budgeted conservatively, having no idea how successful we might be with the virtual event.”

They’re looking at some of the benefits that they could try to carry forward into hybrid events. People could comment live in a chat window. Business sponsorships covered their production costs. The fundraising ratio — money spent to earn a dollar — was better.

“Whatever we come up with will be affected by the experience of this year,” she said.

A planned housing sale in Bonner could result in some longtime renters out in the cold in a brutal rental market.

Corwin “Corky” Clairmont (Salish-Kootenai)'s print was the highest-selling piece at the Missoula Art Museum's "Big Night" art auction. The full title is “Raven Speaks to Friends: ‘The DJ Trump Virus is More Menacing and Deadly than Smallpox Blankets or the COVID 19 Virus’ Your Vote is the Cure.”

The fundraiser was livestreamed from the Missoula Art Museum's galleries last weekend.