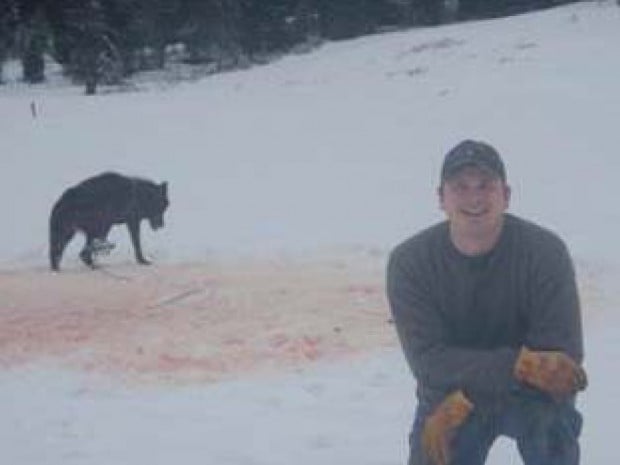 Josh Bransford kneels in front of a gray wolf in a foot-hold trap in northern Idaho. 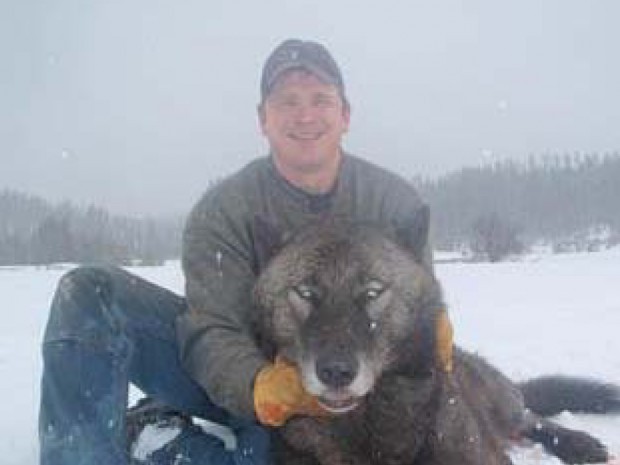 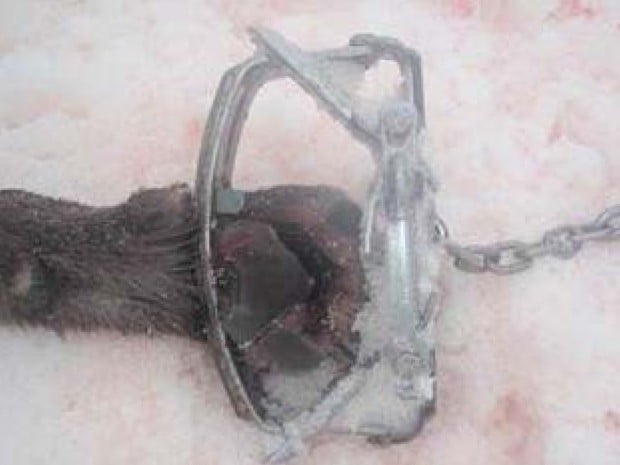 The paw of the gray wolf trapped by Josh Bransford in northern Idaho.

By TRISTAN SCOTT of the Missoulian

The photograph depicts a grinning trapper striking a pose beside his catch, a live 100-pound wolf in northern Idaho. The wolf is coal-black and appears to be hobbling around a ring of blood-stained snow, its leg caught in a foot-hold trap.

Since appearing on the Internet last month, the graphic image has stirred fierce debate between animal rights activists and trapping proponents. The controversy rose to the fore in Missoula last week after a local anti-trapping group condemned the image and the trapper on its website, eliciting a threatening email that the group turned over to local police and federal authorities.

Anja Heister, executive director for Footloose Montana, a Missoula-based nonprofit trying to ban trapping in Montana, says the trapper’s decision to pose for a photograph before killing the wolf – which had allegedly been shot at by bystanders – crosses ethical boundaries and is inhumane. She said the threatening email she received is equally disturbing, but the debate the photograph has sparked is helping to draw broad attention to the inherent cruelty of trapping.

“My concern and hope is that the inhumane attitude of trappers is receiving more exposure because this is certainly not the first person to pose in front of a trapped animal. You see those photos all over the Internet, and it is absolutely unethical,” she said.

“We’re not going to back down,” she continued, referring to the email threat. “We started our nonprofit in 2007 and ever since we launched our website we have received plenty of derogatory and insulting emails, but never a threat like we received last week.”

Heister said she gleaned the photograph from an online trapping forum called TrapperMan.com and posted it to the Footloose Montana Facebook page on March 22. Upon returning to work March 26, she discovered an anonymous email that she interpreted as a death threat directed toward members of the organization and their families.

“I would like to donate (sic) a gun to your childs (sic) head to make sure you can watch it die slowly so I can have my picture taken with it’s (sic) bleeding dying screaming for mercy body. YOU WILL BE THE TARGET NEXT (expletive)!” the message read.

Heister reported the email to the Missoula Police Department, which is investigating the threat along with the FBI.

On Monday, Friends of the Clearwater sent a letter to the director of the Idaho Department of Fish and Game seeking an investigation into the circumstances surrounding the trapping of the wolf.

On Tuesday, the Center for Biological Diversity sent letters to both the U.S. Forest Service and Idaho Attorney General Lawrence Wasden requesting investigations into the incident.

“A year ago, that wolf was protected as a member of an endangered species, but last month he was trapped, tortured and killed thanks to an underhanded congressional rider that’s also responsible for the deaths of hundreds of other wolves in the northern Rocky Mountains,” said the group’s Michael Robinson. “A lack of respect for the balance of nature is leading to a war on wolves in the northern Rocky Mountains.”

Since the photograph began circulating online, in fact, it has prompted considerable public outcry, garnering attention from local and national media outlets.

In response, conservation officers with the Idaho Department of Fish and Game completed an investigation into the incident and concluded that the trapper, a fire management officer for the Nez Perce National Forest, did not commit any legal violations.

Mike Keckler, communications chief for the Idaho Department of Fish and Game, said trapper Josh Bransford possessed all of the proper tags, attended a state-sponsored wolf-trapping class, was trapping on private land, had permission from the landowner and was checking his traps daily (Idaho law only requires trappers to check their trap lines every 72 hours).

Investigators subsequently “concluded that he did nothing wrong,” Keckler said.

“When they issue a citation it has to be for a violation and in this instance he did not violate any of the rules,” Keckler said. “Now with that said, I think we would have preferred that he dispatched the wolf before photographing himself with it. But that is not what he chose to do.”

Phil Sammon, a spokesman for Region 1 of the Forest Service in Missoula, said the federal agency has also reviewed the incident in response to the public reaction. Sammon said the Forest Service found that Bransford was acting on his own time while involved in a legal, state-licensed activity, and therefore had no grounds for recourse.

“First of all, the Forest Service does not condone any cruel or inhumane treatment of animals or wildlife whatsoever, but this young man was acting on his own time and the trapping took place on private lands,” Sammon said. “So in this case there is no regulatory posture that the Forest Service has. It’s a private individual abiding by state laws on a state issue.”

Bransford did not respond Tuesday to requests for comment made by email and phone.

Many online comments have expressed disgust with the blood-stained snow surrounding the trapped wolf, and attribute the blood to the trap. Others have accused Bransford of shooting the wolf for “target practice,” an allegation that appears unfounded.

The earliest account of the image appeared on the environmental news website Earth Island Journal, and refers to Bransford’s own description of his catch that he posted on the TrapperMan.com forum. The post, in which Bransford uses the online handle “Pinching,” has either been removed by the administrator or blocked to nonmembers.

But according to the Earth Island Journal report by James William Gibson, Bransford wrote that he was alerted to the trapped wolf when a Forest Service officer called him and reported that “you got one up here” and there was “a crowd forming.”

“Several guys had stopped and taken a shot at him already,” the post states, according to Gibson.

Keckler said conservation officers could not verify that the wolf had been shot except for when Bransford dispatched the animal, but a closeup photograph of the wolf’s paw caught in the trap reveals no blood and therefore no other explanation. Keckler said if the trapped wolf had been shot by bystanders, whether the shooters broke the law would depend on the circumstances.

“Keep in mind that wolf hunting season was still on,” Keckler said. “If someone came along and saw a wolf he was perfectly within the law to shoot at that wolf. If he then realized it was in a trap and moved on, that individual would not have violated the law.”

Montana and Idaho both offered public wolf hunts in 2011. Montana hunters killed 166 wolves, under the legal quota of 220, and the season ended Feb. 15.

Idaho hunters and trappers have killed 353 wolves. While a few Idaho hunting districts ended their hunts Dec. 31, most remained open through March 31.

Regardless of whether the trapper broke the law – Heister maintains that whoever shot the wolf did so illegally – Heister said the photograph highlights the intrinsic cruelty that occurs in the sport of trapping.

“If it had been a dog or a cat the guy would have been charged with animal cruelty. Why is it a different story with a wild animal?” she said. “Hunters usually dispatch the animal quickly. They have an ethical code to cause the least amount of suffering. This is just cruel.”

The incident also serves as a reminder of the strong emotions at play on both sides of the issue, as evidenced in the email threat as well as by the harsh public sentiment directed toward the trapper.

As the photograph continues to make the rounds on Internet forums, many threatening comments have been made against Bransford. One blogger posted the man’s address and phone number and offered a $1,000 reward for his “head on a wall.” A separate Facebook group page posted the photograph beside the definition of “sadist” and accused the man of using “a trapped terrified wolf for target practice.”

“That is what I had been led to believe,” Sammon said. “The trap didn’t do it. It probably was someone taking a potshot at the wolf, which is unfortunate.”

Sammon said he’s been inundated with phone calls and emails from people who are outraged by the incident, and while many of the callers are not informed about the facts he does not expect the issue to die swiftly.

“It certainly has generated interest,” he said.

Idaho Fish and Game: No laws broken by trapper who posed with captive wolf

BOISE, Idaho — No laws were broken involving a northern Idaho trapper who posed for a photo in front of a live wolf caught in a leg-hold trap …

Josh Bransford kneels in front of a gray wolf in a foot-hold trap in northern Idaho.

The paw of the gray wolf trapped by Josh Bransford in northern Idaho.