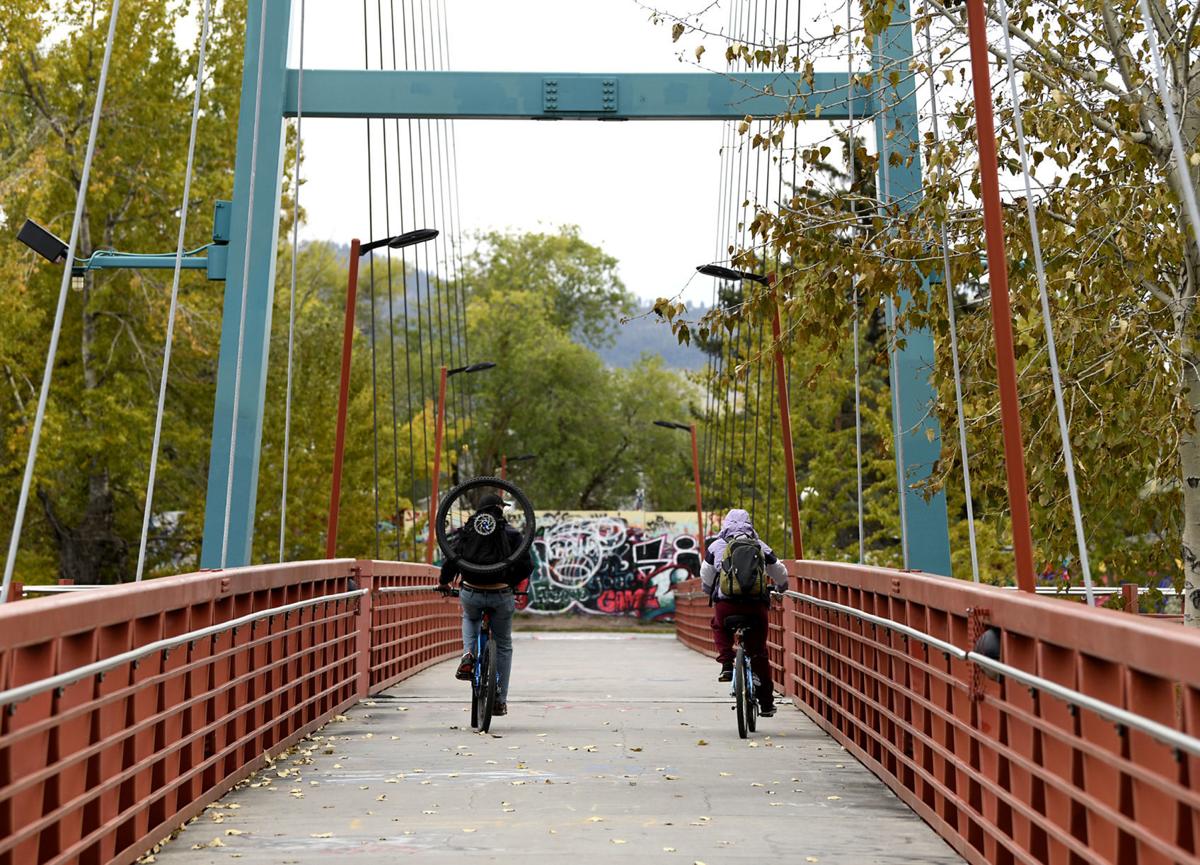 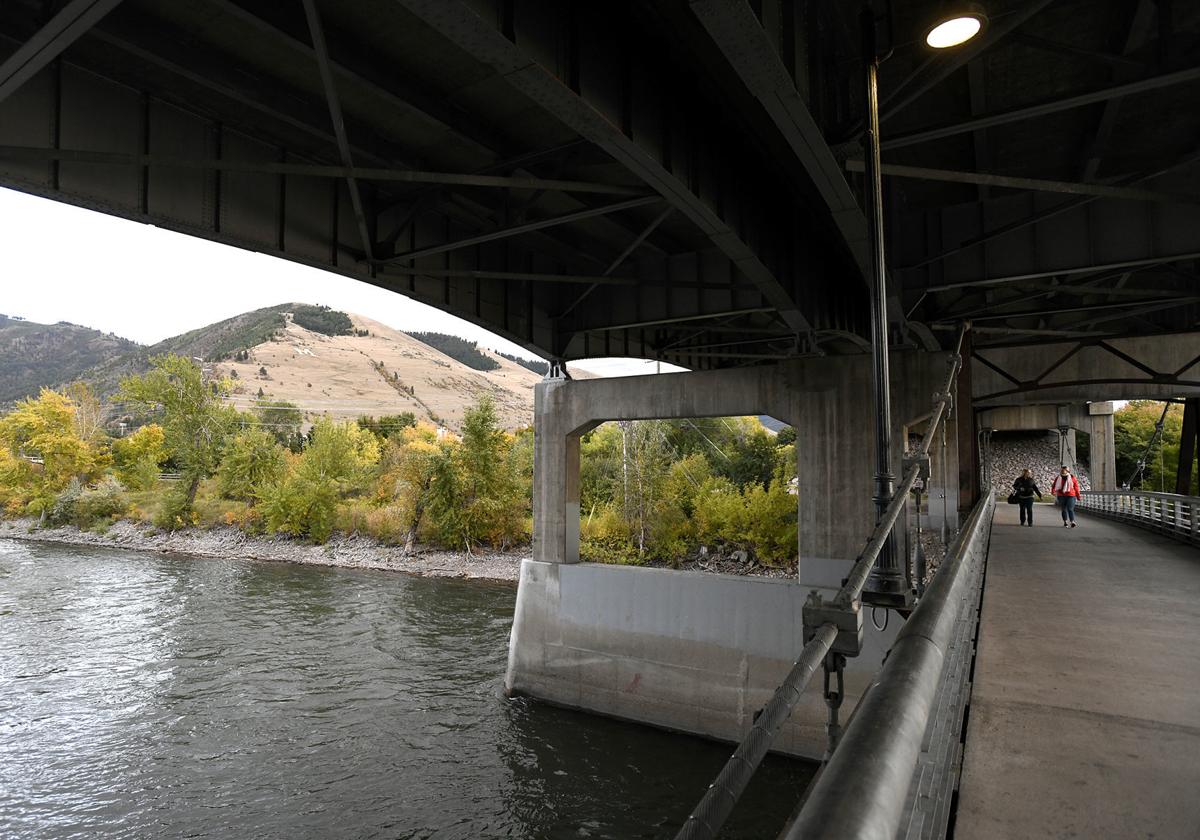 The walking bridge under the Madison Street Bridge connects the trail systems along both banks of the Clark Fork River. The bridge is heavily used by pedestrians and bicyclists crossing the river between downtown and the University of Montana. 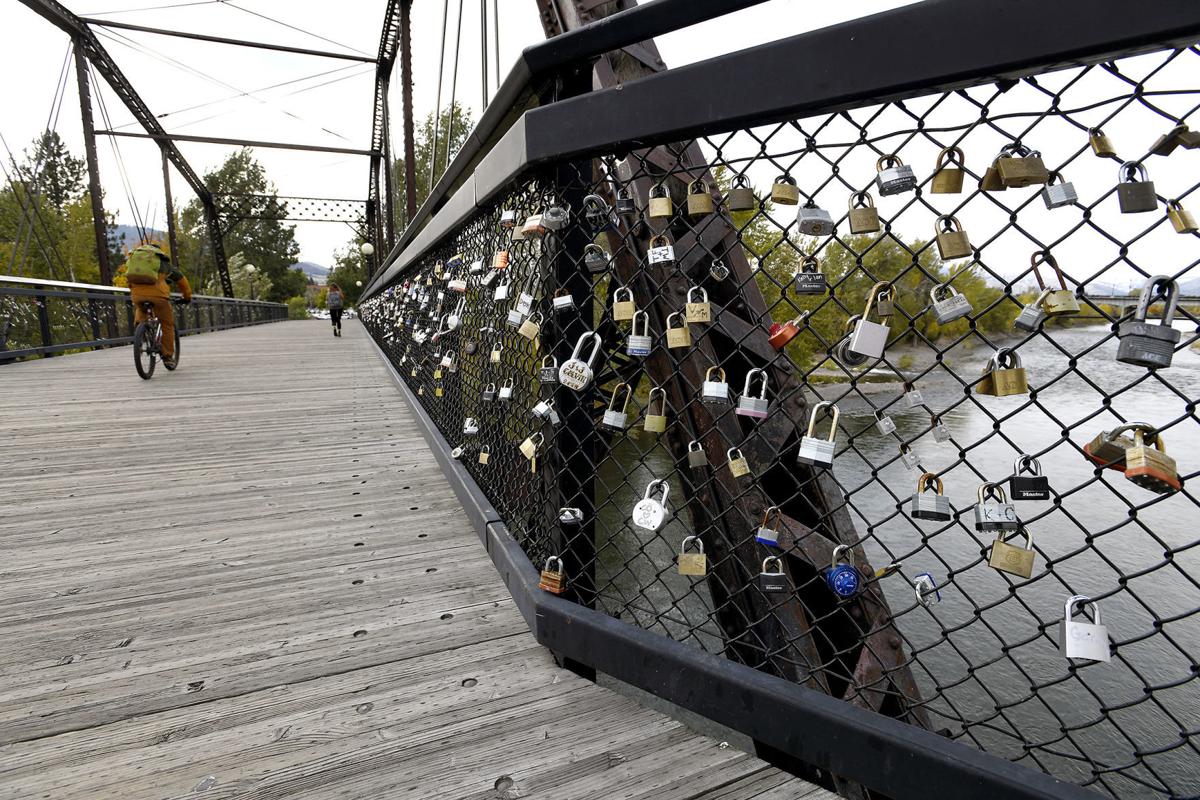 Thousands of "love locks" are attached to the fencing of the Van Buren Street bridge as a lasting statement of affection. 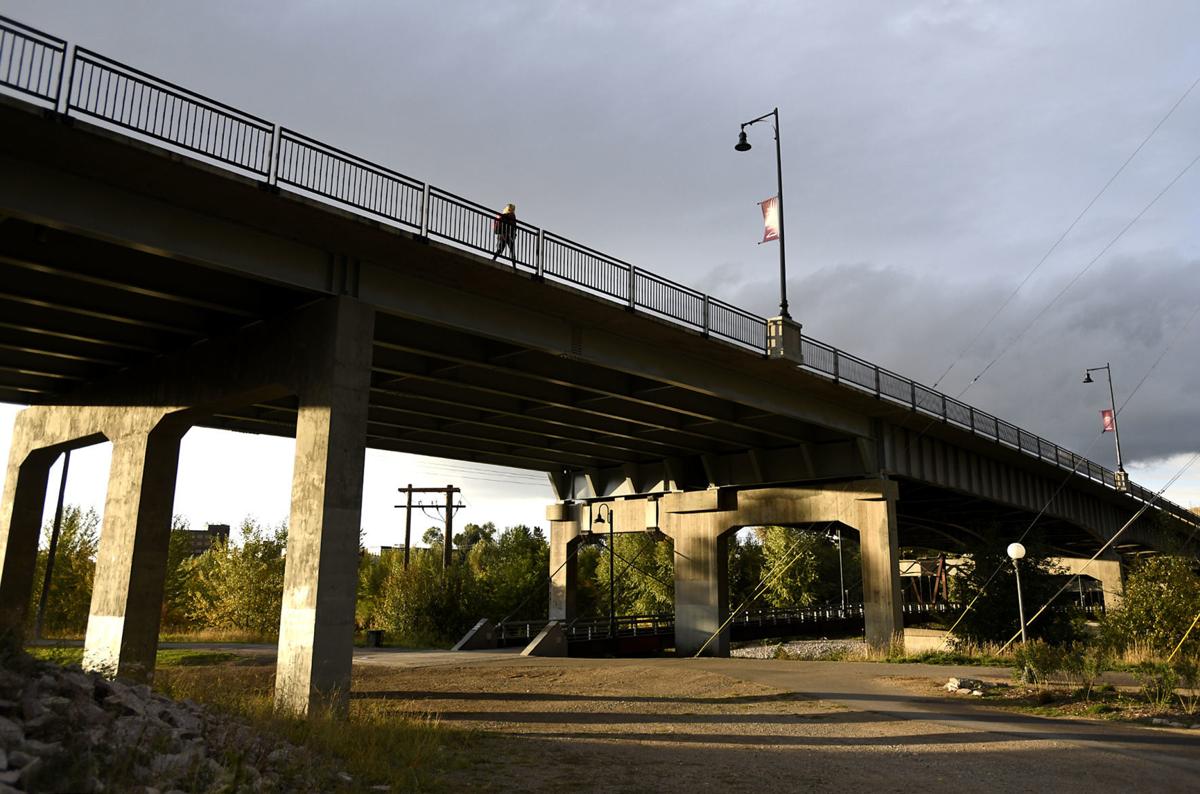 The Madison Street Bridge spans not only the Clark Fork River but also walking trails on both banks. 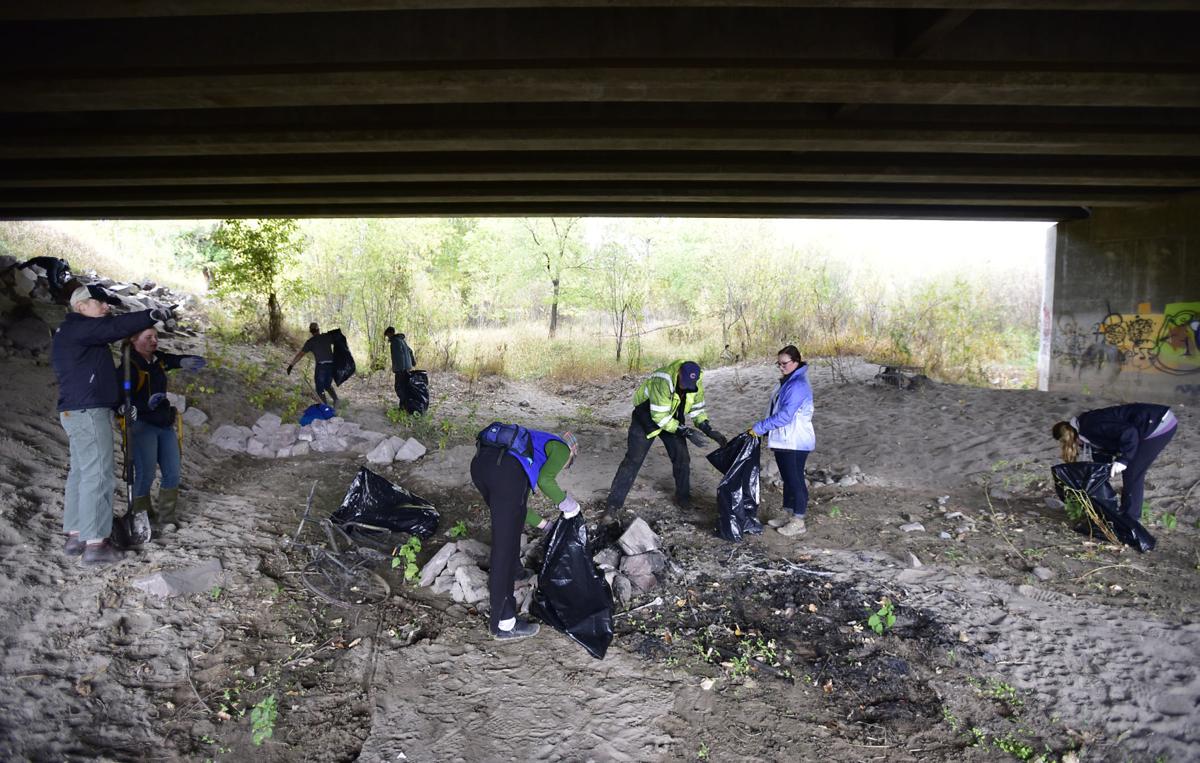 Cleanup crews pick up trash under the Reserve Street Bridge in 2016. The area under and around the bridge is heavily used by people camping out. 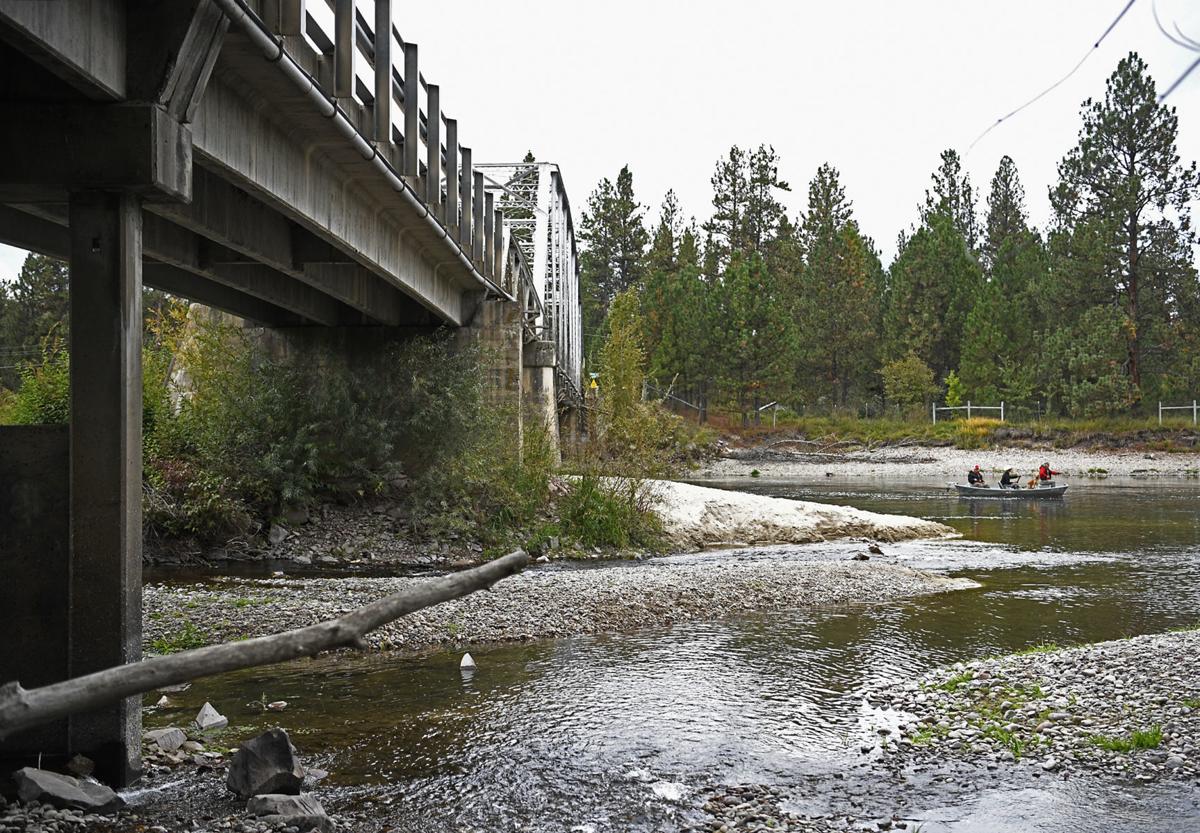 A fishing boat floats on the Bitterroot River under Maclay Bridge last September. Keeping the bridge or replacing it with a new bridge nearby remains a contentious issue. 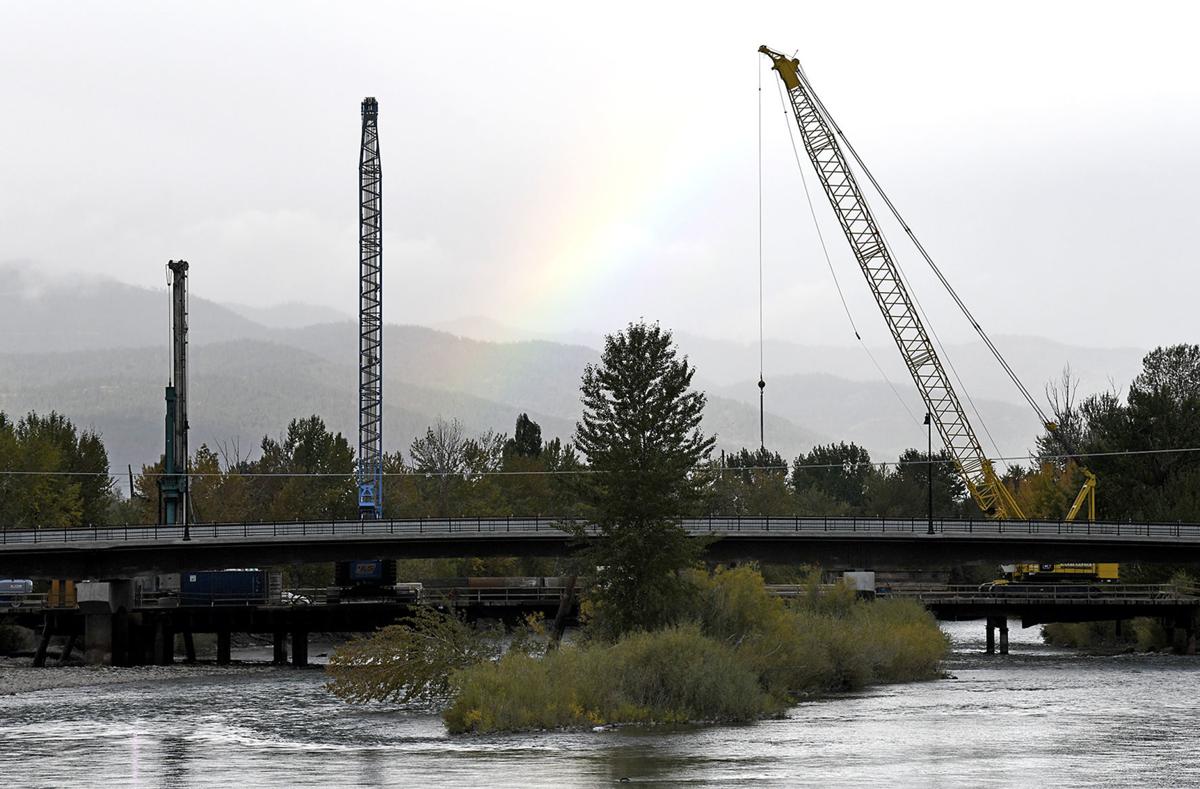 Construction continues on the Russell Street Bridge last week. Missoula's newest bridge aims to alleviate a long-lingering traffic snarl and give pedestrians and bicyclists a safe and quick connection between Missoula's west side and central neighborhoods.

Ericka Schenck likes to walk in the quiet evenings, and on jaunts from her home in the lower Rattlesnake, she looks at bridges along her path.

“I love night under the bridges because the light and the shadows on all the beams and stuff, it’s just so gorgeous,” said Schenck. “So I’m always creeping around under (them).”

The walking pathway suspended under the Madison Street Bridge captivates her, with the structure’s construction in plain view above.

“I’m a sucker for a straight line, you know. There’s just all these crisscrossing lines and angles. I just like to look at it,” Schenck said.

Brent Campbell helped bring that walking and biking bridge to life, a tricky design proposition and one not guaranteed to fly. Campbell, of WGM Group, likes to tell the story over a cocktail on the DoubleTree deck overlooking the Clark Fork River with the bridge as a backdrop.

“One bridge engineer at MDT (Montana Department of Transportation) who was not in favor of the project called it ‘The bridge that never should have been,’ but it works great, and it’s a great connection in the community between the university and the downtown,” Campbell said.

In a city cut by a river and railroad tracks in one direction and busy Reserve Street (with its own river span) in the other direction, bridges stitch the community together. They shuffle people and goods from one side of the river to the other, of course, but they’re also a good perch to watch the sunset or kayakers playing on the water, a good place to see the seasons change. In Missoula, they’ve been fought over and photographed, rallied on and raced over, washed away and rebuilt.

Today, the Madison Street Bridge is newly rebuilt, construction is underway on the Russell Street Bridge and surrounding project, and planning is taking place for a remodel of the Higgins Avenue Bridge with wider walkways. The city’s bicycle and pedestrian crossings are popular and unique too, sometimes by design and sometimes because the people who use them make them so.

On the west side of Missoula, the California Street Bridge and its 10 pairs of cables pulled through a tall supporting center create beauty through symmetry. The water feels close crossing that bridge, and on its south side, a wall of colorful graffiti meets passers-by.

Sweethearts have made their mark on the Van Buren Bridge, padlocking 2,200 “love locks” to the railing. The Northside overpass offers a view of the railroad tracks and glimpse of Cha-paa-qn Peak, and sometimes at night, people put up makeshift shelters on the bridge and sleep in its corners.

Many of the bridges create controversy, such as the ongoing battle over the Maclay Bridge (See Page 1 story) and a pedestrian bridge over South Reserve Street. Some Missoulians argued against spending money for a bicycle and pedestrian bridge over Reserve, but the Missoula Redevelopment Agency shouldered the $4.5 million bill, and the number of bikers and walkers using it is estimated at 56,000 a year.

In 1908, floodwaters washed away the Higgins bridge. A Missoulian headline from June 7 read, “City in State of Alarm: People are all agog over the ravages of the swollen streams.” The news report said people were separated from their families, and Missoula was “segregated into three parts.”

The missing bridge created trouble for the Missoulian delivery crew too, and the story tells how they distributed the Sunday paper.

“The carriers were waiting on the South Side of the river when a wagon reached the north bank with the newspapers. A stout bow and arrow carried a heavy cord across the break in the railway bridge.

“There it was caught and a rope attached, and with the use of a container the papers were dragged across the swirling current and quickly delivered to the south side readers, anxious to get some word from across the stream, as even telephone communication across the river, was out.”

From the bridges that cross the river, you can see osprey hunting, blue herons flying, and ducks paddling the rippling waves.

Campbell, president of WGM Group, said a pattern of bicycle and pedestrian crossings at every quarter-mile or so is emerging in Missoula. In the future, he sees a bridge across the river in Hellgate Canyon near Missoula College.

The bicycle and pedestrian bridge under the Madison Street Bridge came about because one of the urban renewal districts was nearing its close with $1.5 million, maybe a couple of million dollars, left over. Attempts to purchase land to grow the trail system hadn’t come to fruition, but Campbell said he believed the Missoula Redevelopment Agency could still improve the trail system in that area.

He and then-director Geoff Badenoch started talking about a walking and biking bridge under the main Madison bridge, and engineers batted around design ideas. “Just for fun,” Campbell said they looked at the idea of suspension.

As it happened, he said there was enough “structural redundancy” in the original bridge that it was strong enough for engineers to hang the new bridge off the old bridge.

“That’s where the suspension bridge came about. It’s a really elegant solution because it saves quite a bit of money,” Campbell said.

Generally, he said aesthetics are an important part of a bridge design, and it's good to avoid piers in the water as well. He said the span and bridge type are critical considerations.

"I think we look at expense and then we look at aesthetics. And if we can do a beautiful bridge like the California Street Bridge with nominal additional cost for the bridge type, then that’s the way we go," he said.

Missoula’s forefathers had the vision to build Van Buren Street and Russell Street and Higgins Avenue bridges, and then the Orange Street and Reserve Street bridges came along, Campbell said.

Now, Missoula has grown to the west, and Reserve Street is clogged with people who live south of the river and commute to and from their jobs north of it. So Campbell sees need for another river crossing (“I’m not talking about a bypass”).

“We need a better bridge network to distribute the traffic rather than widening Reserve Street,” Campbell said.

Schenck loves the lights on the Van Buren Bridge (lighting the bridges was another idea that was once controversial) and the original footbridge. For her mental health, she walks at least three miles a day, often closer to five.

“When we lived on the Northside, the kids were really little, and we spent a lot of time on the ped bridge watching trains,” Schenck said. “That was their favorite thing for kind of a long time. They’d ride their scooters, and we’d watch the trains.”

From her vantage above the river, Schenck likes watching the water, the fish swimming in it, and people playing on it. This summer, the river was full.

“You’d be walking over the bridge, and it was almost like watching rides at a theme park. There were so many people floating. It’s a really good gauge of the season. You can see the water coming up, and the water going down and freezing.”

Riding her bicycle over the Higgins Avenue Bridge gives Winona Bateman a joyous feeling, whether she’s pedaling toward the Hip Strip or downtown.

“It just has a good view no matter which direction you’re going … you feel like you’re coming into something good,” said Bateman, a writer and community organizer.

She and her daughter, 5, pause on the bridges on their trips around town to watch birds or talk about spring runoff or the way layers of ice freeze on the river in winter.

“It’s really special we have a river through our city that we’re pretty invested in taking care of, and the bridges are a great way to see it.”

Russell work to shut down for Thanksgiving

Construction on the Russell Street project will pause at noon Wednesday for the rest of Thanksgiving week to reduce congestion for residents and visitors.

The walking bridge under the Madison Street Bridge connects the trail systems along both banks of the Clark Fork River. The bridge is heavily used by pedestrians and bicyclists crossing the river between downtown and the University of Montana.

Thousands of "love locks" are attached to the fencing of the Van Buren Street bridge as a lasting statement of affection.

The Madison Street Bridge spans not only the Clark Fork River but also walking trails on both banks.

Cleanup crews pick up trash under the Reserve Street Bridge in 2016. The area under and around the bridge is heavily used by people camping out.

A fishing boat floats on the Bitterroot River under Maclay Bridge last September. Keeping the bridge or replacing it with a new bridge nearby remains a contentious issue.

Construction continues on the Russell Street Bridge last week. Missoula's newest bridge aims to alleviate a long-lingering traffic snarl and give pedestrians and bicyclists a safe and quick connection between Missoula's west side and central neighborhoods.