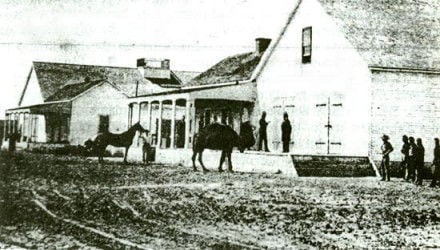 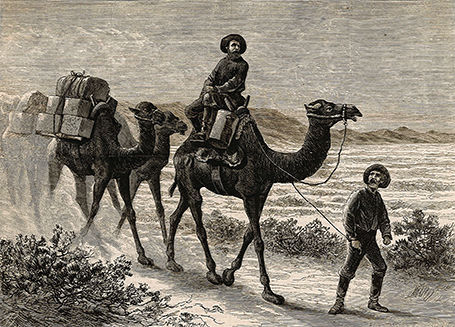 Look out your window.

Imagine, if you will, the impudent nose of a humpty-back camel passing by on the road.

Then another. And another, each animal loaded neck to tail with half a ton of sacks filled with flour and casks filled with nails.

The shock value is delicious, but it was not an uncommon experience along the Mullan Trail 150 years ago in Montana.

Ellen Baumler has studied what there is to study about the Great Camel Experiment that started in the territory in 1865 and petered out the next year. Turns out other pack animals didn’t like the smell of the dromedaries – and vice versa.

“It’s weird, because the newspapers of the day don’t really say very much about it,” said Baumler, a prolific Montana author, blogger and interpretive historian at the Montana Historical Society. “There are only about three or four mentions of camels at all in the Montana Post. You'd think it's something they’d talk about a lot.”

Baumler will be talking about it on Saturday when the annual Mullan Road Conference returns to Fort Benton.

The three-day conference, which was held in Missoula last year, will be hosted by the River and Plains Society. The Memorial Day conference coincides with the summer opening of most of Fort Benton’s impressive array of museums, and begins Friday night with a reception at Old Fort Benton.

Baumler’s slideshow presentation about camels on the Mullan Road is one of 10 talks that day on subjects ranging from the Whoop-Up Trail to the 1855 treaties that paved the way for the road, to an update by historian Jon Axline of the Montana Department of Transportation on a movement to add Montana’s portion of the Mullan Road to the National Register of Historic Places.

On Sunday, conference coordinator Ken Robison will lead a bus field trip to the Sun River Valley and Birdtail Rock.

Montana’s first pack camels probably trod the road between Virginia City and Helena. For a time, they were common sights in Bear Gulch, Gold Creek and Deer Lodge west of the mountains.

Their time in Montana apparently ended with long-haul stints on the Mullan Road to Walla Walla out of Hell Gate or Missoula.

What Mullan Road camel tales lack in detail they make up for in color.

There’s the one about the train that met up with a string of more traditional pack animals somewhere in the Hellgate Canyon. The latter were hauling casks of whiskey to saloons preparing for Hell Gate’s Fourth of July celebration. As the story goes, the booze-carting mules freaked out and stampeded. Their cargo didn’t fare well.

“The casks being all sprung or broken, the liquor leaked away and the residents of that section were compelled to drink water until a new shipment could be procured,” William S. Lewis wrote in the Washington Historical Quarterly in 1928.

Then there was the reaction of a hunter in the Snowshoe/Ophir area northeast of Avon. Some versions say the hunter mistook the camel for a moose, but that’s not how the Montana Post first reported it in its July 1, 1865, edition.

“Thinking that he was about to contribute a new name to the list of American quadrupeds, he fired,” the Post said. “Down sank 'the Ship of the Desert,' and up ran the hunter. On discovering the anatomical peculiarities of his prize, Nimrod evaporated with rapidity.”

“On mature reflection,” the Post’s account concluded, “the camel-shooter has determined to go for elephants on his next hunt.”

Baumler will discuss how the camel got to Montana in the first place. Before Jefferson Davis became president of the Confederacy, he convinced Congress as Secretary of War to appropriate $30,000 to give them a try in the Southwest.

“The Western U.S. was really considered the Great American Desert, and Davis was convinced after hearing about camels’ performance in the Crimean War,” Baumler said.

A camel could carry four times the load of the average pack mule and plodded on for days on one “drink” of water. Congress appropriated $30,000 to ship 33 North African camels from Turkey to Texas, along with five camel drivers.

Even before construction of the Mullan Road – a military wagon highway across the Rockies from Walla Walla to Fort Benton – Edward Beale used camels to survey a road from Fort Defiance, New Mexico, to California in 1856.

By and by, San Francisco entrepreneurs had camels shipped from China and put them to work hauling freight to the mining districts of the Southwest. Baumler said at one time there were so many of the exotic animals in Nevada, laws were passed against camels in the street.

In the spring of 1862, as the Army divested itself of camels to concentrate on fighting Davis and the Confederates in the Civil War, Frank Laumeister bought 20 camels from San Francisco merchant Otto Esche and put them to use hauling freight in the gold fields of British Columbia.

Whether the remnants of those camels were the ones that popped up in Montana three years later is a matter of debate. Baumler thinks the camels in Montana probably came from the West Coast herd via Boise.

And they returned south, most of them, within two years. The culprit wasn’t Montana’s harsh climate so much as the camels' incompatibility with other pack animals.

“It’s interesting that camels were actually indigenous to Montana at one time, way, way back there,” Baumler said. “They’ve found fossilized bones in the Flint Creek Valley and Sheep Rock Spring near Whitehall. It's sort of the case that the camels came back.”

Will Cave led a fascinating life.

Lt. John Mullan’s meteorologist and astronomer packed up his observatory and departed the Missoula Valley for Fort Benton.

Fort Benton: River town revels in its colorful past

FORT BENTON – It’s a beautiful thing, watching the rosy fingers of a winter dawn spread across the prairie of central Montana from a knoll wit…

Montana A to Z: F is for Fort Benton

‘F’ is for Fort Benton, hotbed of falconry

FORT BENTON – The most famous falconer in the world lives in retirement here, retirement being a relative notion.

Did James brothers once hang out in Montana?

Nothing like a good ol’ Montana history mystery to get the holiday season rolling.

A remnant of one of Montana’s biggest mining disasters takes the No. 1 seed into the state historical society’s version of March Madness.