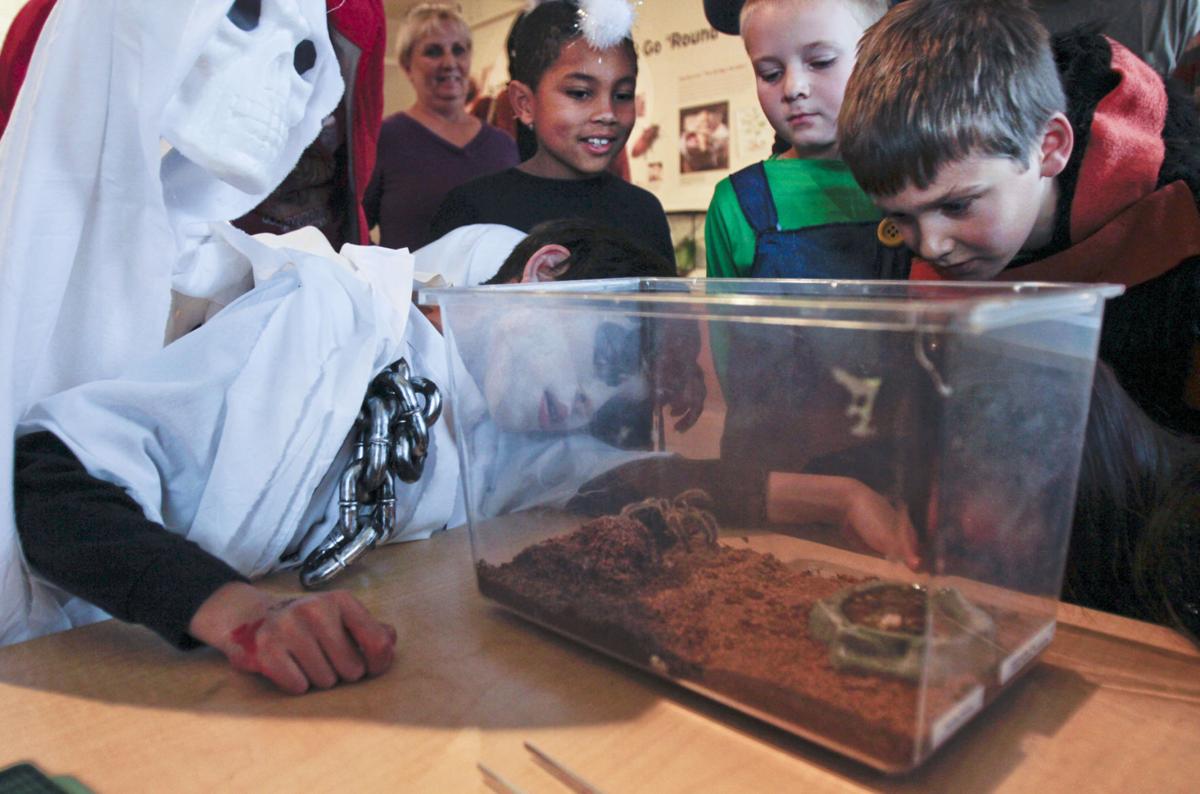 Levi Narum, left, watches a tarantula devour a cricket during the Missoula Insectarium’s Halloween Party. Tarantula feeding and other spider-related activities are a big hit during the event as it honors October as Spider Month. 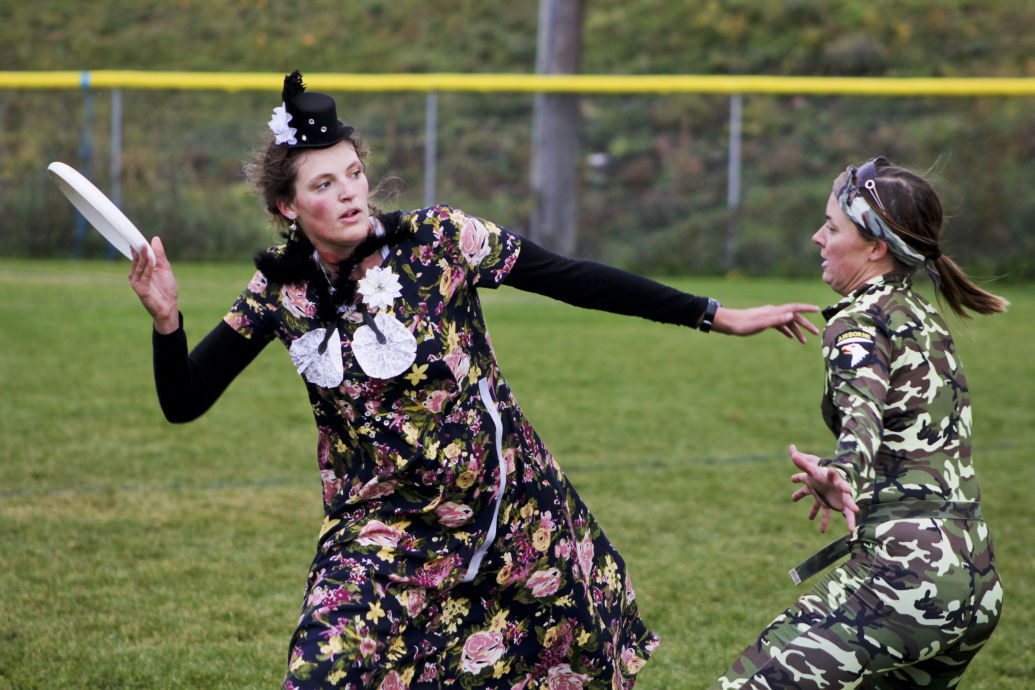 Mary Stewart, left, is one of several Missoulians who came to participate in the Halloween Hat Tournament, an ultimate Frisbee tournament that encourages players to dress in their best Halloween costume.

While some Missoulians spent Halloween at costume parties, haunted houses and corn mazes, a crowd gathered at the Missoula Insectarium to get up close with some creepy crawlers.

On Saturday afternoon, children gathered next to the clear plastic box of Rosie, the insectarium’s Chilean rose hair tarantula. Carolyn Wiley, the museum educator, readied a cricket about Rosie’s enclosure, telling the kids that the spider only eats about once a week.

“She is a spider, so she’s not running around like you guys are. She doesn’t have to focus on school like you do,” Wiley said.

As soon as the cricket was dropped into the box, Rosie pounced, paralyzing the bug with venom from her fangs.

“She can’t see very well, but she can sense the vibrations of the cricket,” Wiley said.

Heather Ryan, 9, came to the insectarium on Halloween dressed like a witch, but kept her distance from Rosie’s table.

“I don’t really like bugs. I wanted to see it, but I’m staying over here,” she said.

Ryan said she was looking forward to going trick or treating with her family later near their home in the Rattlesnake neighborhood.

The tournament has its roots in the mid-1990s. Blake Bucher, one of the original organizers, said it started as a way to have a fun event to end the summer playing season. Instead of being able to promote the game on social media, he said in the early years they got the word out by stapling posters up around town and hoping someone would come out to play.

“The whole ultimate group in Missoula, it’s way bigger now than when we started,” he said.

As a hat tournament, every player who showed up put their name into a hat, with teams drawn randomly before the games started. Bucher, dressed as a prisoner, said the tournament usually ends with another game where the players are split in half by age.

“Experience usually wins out over youth,” he said.

Scott Albrethsen said there was no chance that rain in the early half of the day on Saturday would stop the tournament.

“There was a time a couple of years ago where we had an inch or two of snow,” he said.

One of the special rules that make the Halloween tournament interesting, Albrethsen said, is that any props a player has that are a part of their costume are allowed to be used during the game. This had led to some players pushing that rule as far as it can go. Albrethsen said a few years ago, three of his friends tied themselves together using ropes and harnesses and came as the Bermuda Triangle.

“They all counted as one player, so the team they were on had nine people instead of seven,” he said.

Kevin Ryder, one of the organizers of the tournament, was utilizing the special costume accessory rule to gain a competitive advantage this year. He had come as a superhero of his own design, Antler Man.

“I had some antlers attached to me during the game and I could throw them at the disc for defense,” he said.

Ryder said he moved to Missoula five years ago on Halloween and has been playing in the annual tournament ever since.

“This was my introduction to Missoula ultimate,” he said.

Sometimes people make it through the Missoula Maze in half an hour. Other times they just give up.

The time-honored tradition of the Halloween cover set will be on full display all around downtown this weekend, as fans catch renditions of Da…

New study has exposed the third leading global cause of death

New study has exposed the third leading global cause of death

Levi Narum, left, watches a tarantula devour a cricket during the Missoula Insectarium’s Halloween Party. Tarantula feeding and other spider-related activities are a big hit during the event as it honors October as Spider Month.

Mary Stewart, left, is one of several Missoulians who came to participate in the Halloween Hat Tournament, an ultimate Frisbee tournament that encourages players to dress in their best Halloween costume.