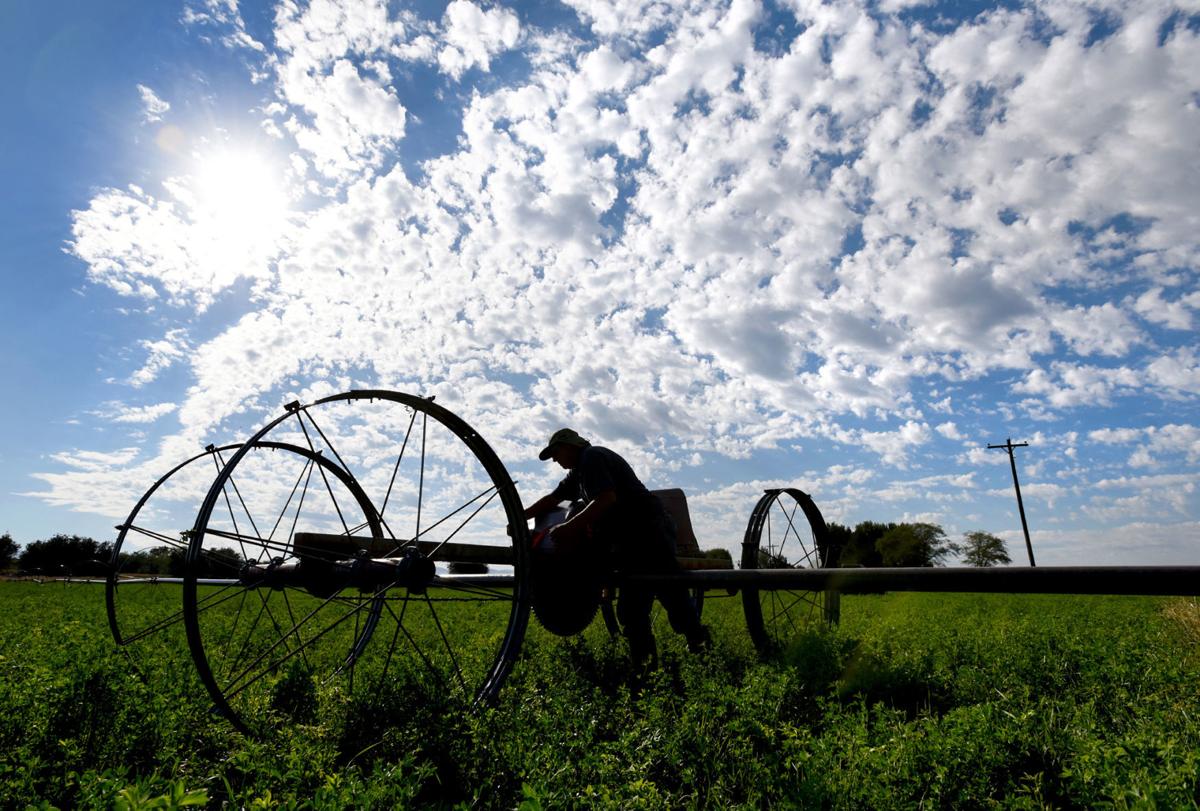 Charlie Deschamps works in the early morning hours one day last week to set sprinkler lines on the farm his family has worked for four generations off Mullan Road between Frenchtown and Missoula. Deschamps is working with the Montana Land Reliance to place a permanent conservation easement on the 545-acre ranch, guaranteeing the land could only be used for agriculture. 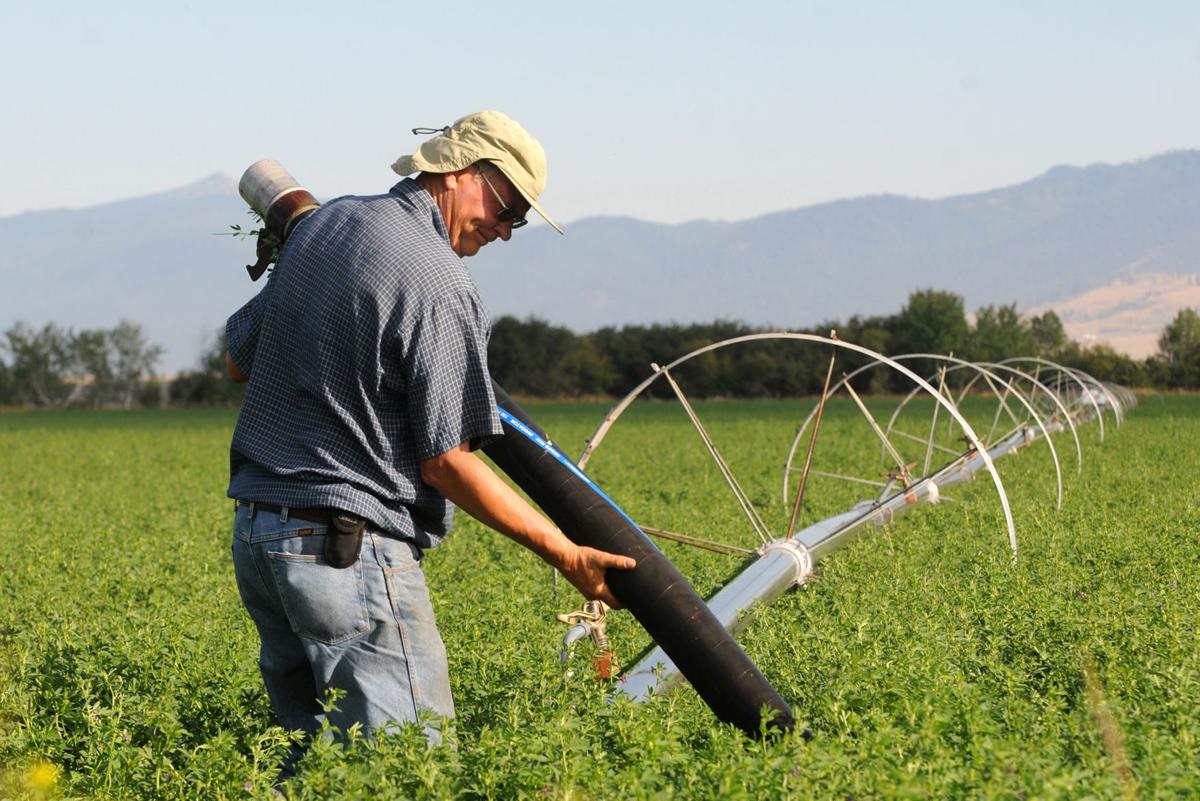 Deschamps harvests 1,000 tons of alfalfa and grass hay off the farm every year. 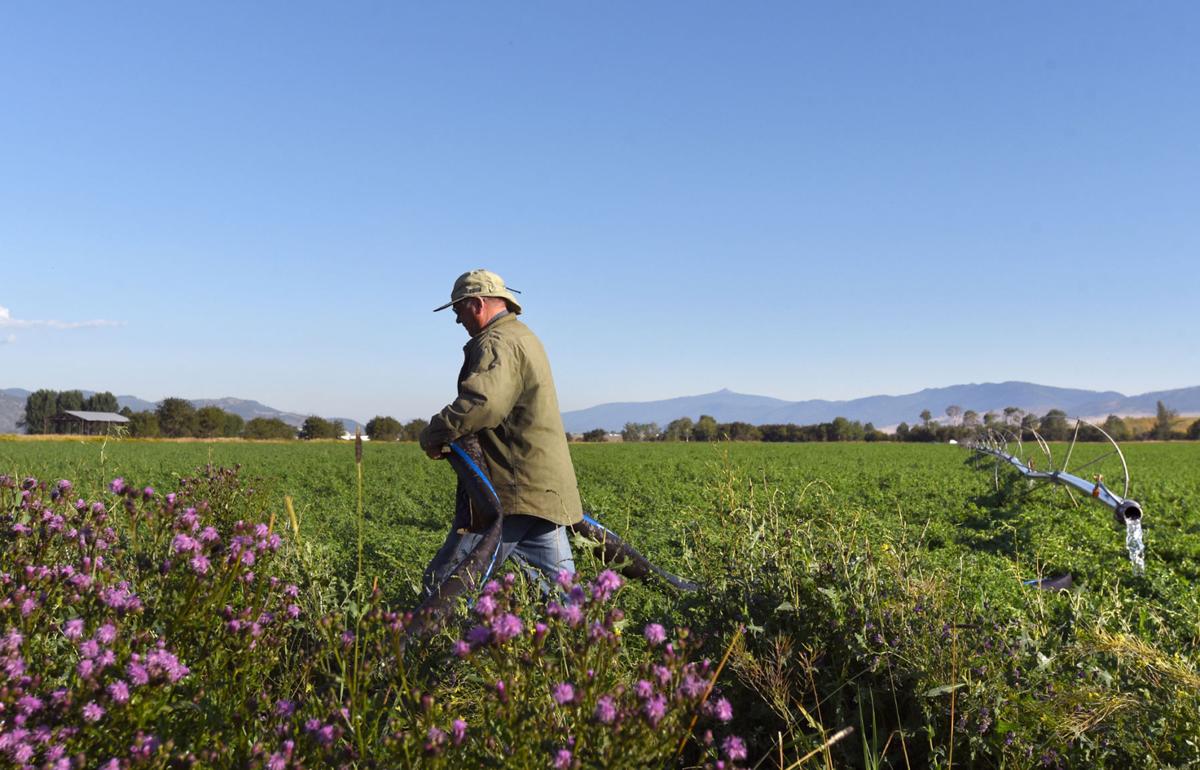 Charlie Deschamps works in the early morning hours one day last week to set sprinkler lines on the farm his family has worked for four generations off Mullan Road between Frenchtown and Missoula. Deschamps is working with the Montana Land Reliance to place a permanent conservation easement on the 545-acre ranch, guaranteeing the land could only be used for agriculture.

Deschamps harvests 1,000 tons of alfalfa and grass hay off the farm every year.

FRENCHTOWN – A trip to the Deschamps Ranch west of Missoula is like time-traveling back to an era when agriculture was the bedrock of the county, as it was when Gaspard Deschamps first settled here from Canada in 1877.

Compared to the rest of the Missoula Valley, not much has changed here since that time. It’s an oasis of rural greenery in a part of the county rapidly becoming urban asphalt. Gaspard’s great-grandson Charlie still works the land and grows 1,000 tons of hay every year.

A mysterious geological feature on the ranch brings clean water from deep underground at a constant 52 degrees year-round. The spring is a critical habitat for all kinds of mammals and birds, from voles to curlews. Although the ranch has remained intact through two World Wars, a Great Depression and a Great Recession, the threat most likely to destroy it is much more benign but nearly unstoppable: development.

That’s why Charlie and his wife Nancy are working with the Montana Land Reliance, a nonprofit land trust, to place the 545 acres under a permanent conservation easement that would guarantee it could be used only for agriculture forever.

To accomplish this, they’ll need $524,500 from the $10 million Open Space Bond passed by Missoula voters in 2006. The funding would be split between the city and county allocation – each got $5 million originally. The money would be matched by a federal initiative, the Agricultural Land Easement Program. It would be one of the largest and most important open space easements protected in the county since the measure was passed.

Charlie Deschamps, who has to drive past an upper-class subdivision to get to his alfalfa field from Missoula, said his reasoning is simple.

Nancy Deschamps said they are continuing the legacy built by the three generations before them.

“Charlie’s family has owned the property for four generations,” she said. “They have worked hard all these years to keep it in ag. During the Depression, they almost lost it. The banker brought a prospective buyer to the house and Grandma Deschamps wouldn’t let them in. They were determined people and industrious and good people, and keeping the land in ag meant everything to them. And they wanted to preserve it for their heirs, as we have tried to do to.”

The City Open Space Advisory Committee and the County Open Lands Committee are jointly vetting the potential to fund the project. This past Monday, they took a field trip to see just why the property is so crucial to the mission of the Open Space Bond.

The Montana Department of Fish, Wildlife and Parks has identified the property as falling within the Bitterroot/Clark Fork Riparian Corridor Focal Area, which is a high-priority landscape area, according to the 2015 State Wildlife Action Plan.

Jim Brown of Five Valleys Audubon said it’s one of the only places in the entire Missoula Valley where bobolinks – a strikingly colored songbird – have been found nesting.

“At one time in the Missoula Valley we used to have a lot more wet grasslands,” Brown explained. “But with this development, it has pretty much disappeared. So this is the only area I know where there’s really bobolinks in the Missoula Valley. There’s a number of real key bird assets here. This property is really to live for, and the surrounding area. There’s a lot of significant habitat niches on this property that makes it so special.”

Brown called the spring the “mother lode” of lower Lavelle Creek, which flows into the nearby Clark Fork River. The water draws great blue herons, eagles, turkey vultures and all kinds of other waterfowl, especially since it doesn’t freeze in the winter.

“You’ve got a lot of native grassland here,” Brown said. “These brushy draws are really important bird nesting areas. There’s a lot of hawthorn, chokecherry and serviceberry. And that’s a special feature in the Missoula Valley as far as wildlife. The grasslands and the pastures are important because they support a real high vole population. So do the wetlands. So this area is very popular with raptors, and one of the special things is wintering raptors. We get the red-tailed hawk and the rough-legged hawk, the golden eagle, the bald eagle, the northern harrier.”

Long-eared owls nest in the grasslands and hunt at night for voles, so the ranch is attractive to them, Brown said. Short-eared owls are declining nationally, but there’s at least 32 of them in the Grass Valley area.

“That’s really unusual,” Brown said. “The other thing is there’s a lot of migrating songbirds that come up here to nest and breed, and then they go to Mexico and Central America to winter.”

The area has been identified as the Clark Fork-Grass Valley Important Bird Area because so many species call it home.

“It’s a location that provides a lot of conservation benefits to city and county residents,” Erickson said. “It’s a significant wildlife habitat. And it’s an area where there’s been quite a bit of residential development in the vicinity.”

The easement means that even if the property falls out of the Deschamps family’s hands years down the road, there can be only two houses built on the property and nothing else can be developed. Agriculture will be allowed, however. Because the resale value of the property will be lower due to the restrictions, Charlie Deschamps said it means a farmer will have an easier time purchasing the land. The ranch includes a historic farmhouse that had the first shingled roof in the region.

Mark Schlitz, the western manager for the Montana Land Reliance, said the Deschamps family chose to work with them because they specialize in agriculture easements. In fact, MLR has protected more property in the state than any other land trust, primarily because they work with huge ranches.

He said agricultural lands are extremely critical to wildlife, despite some misperceptions. Crops may not be as ideal for animals as a pristine native plant landscape, but many ranches contain a mix of both.

“That’s what’s so unique about this property, is it’s so varied,” he said. “The property’s got 59 percent soils that are (listed by the Department of Natural Resources Conservation) statewide or local importance, prime soils. It’s one of the top easements in the state.”

According to Erickson, there’s only $1.74 million left of the city’s original Open Space Bond money. Some $1.15 million remains in the county’s portion, according to Kali Becher, a rural landscape scientist with the county’s Parks, Trails and Open Lands program.

The county has completed more than 20 projects, ranging from less than 50 acres to more than 3,000 for a total of more than 26,000 acres conserved. Becher said that every dollar of open space bond funding has been matched by an average of $4.90 from other sources.

If county and city taxpayers have been pleased with all the open space projects that they’ve paid for since 2006, including land in the South Hills, the North Hills, Marshall Canyon and Grant Creek, they may have to fund another bond in the near future.

“The message is the money for open space is dwindling,” Erickson said. “There have been a lot of projects that have used those funds according to the original purpose. And they have provided a significant amount of conservation in our valley. There are a lot of projects being vetted so after the end of 2016 there’s going to be quite a bit less. If we want this program to continue we’re going to have to seek additional funding.”

GRASS VALLEY – At one point six years ago, these pristine 75 acres of high-quality farmland west of Missoula were slated for a controversial 3…