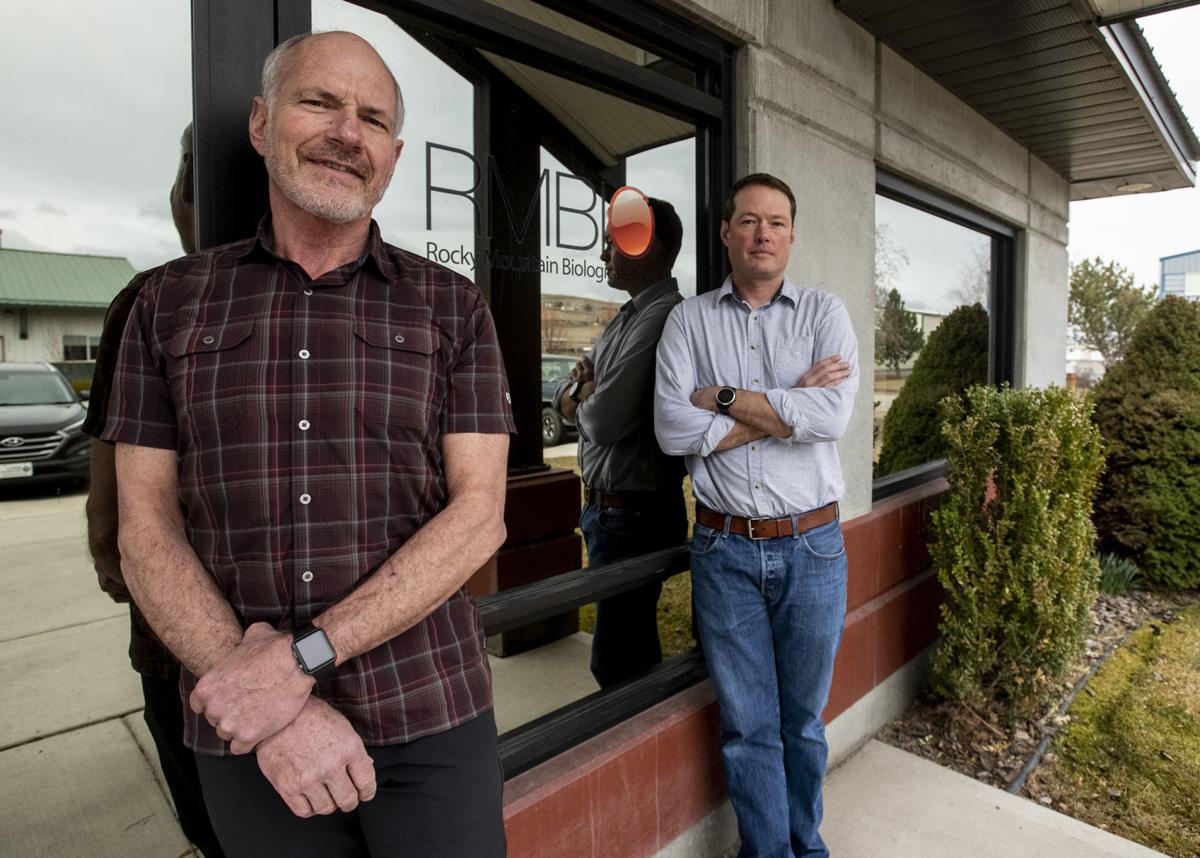 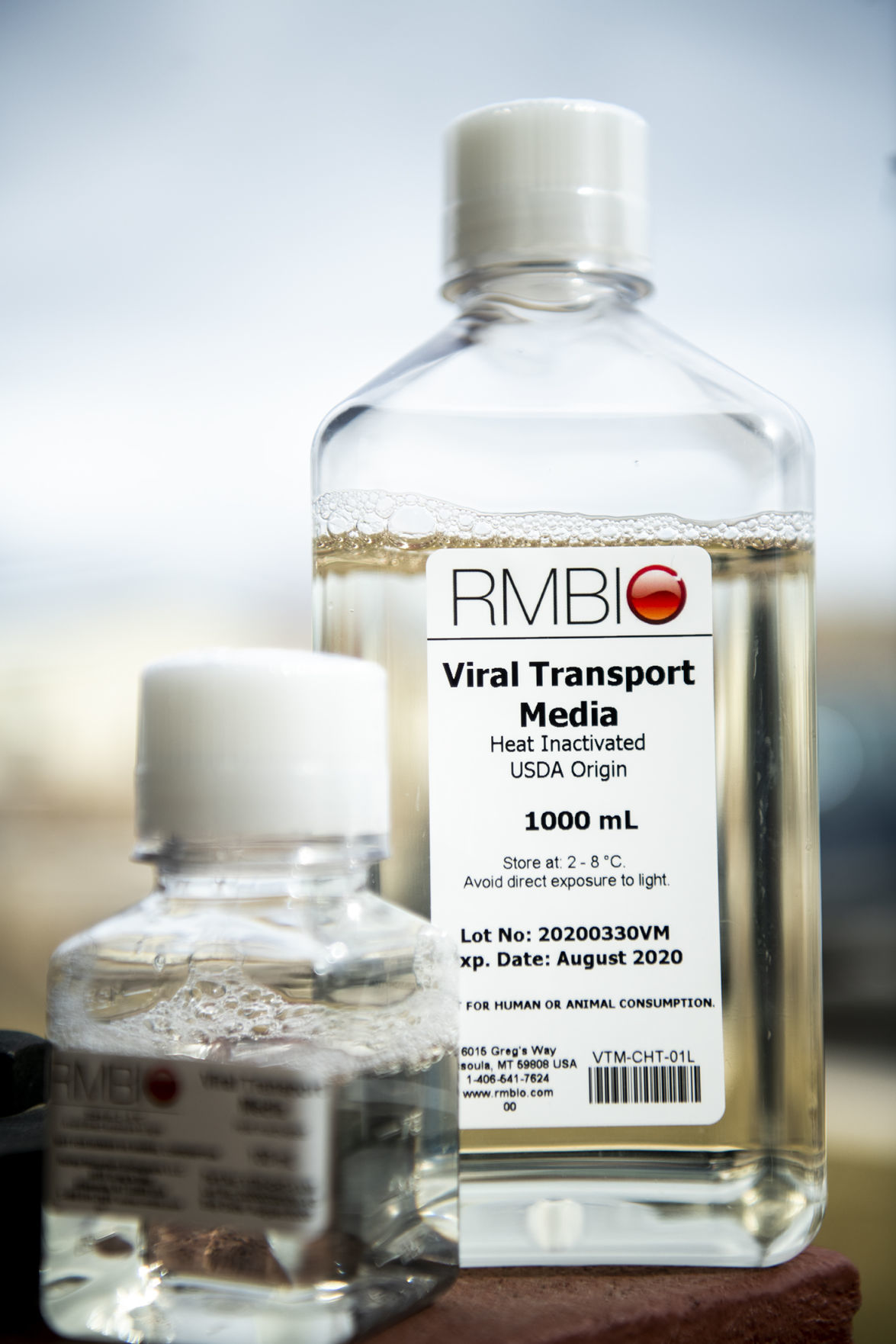 "The viral transport media was a bottleneck in the process of getting tested," said Jeff Pease, the chief business development officer at Rocky Mountain Biologicals. "I don't know the reason why it's not more available, but Grant Kier and Nicole Finke at Community Medical Center informed us there's a shortage."

A Missoula biotechnology company has rapidly switched gears in order to produce a much-needed component for COVID-19 testing capabilities in Montana and the world if needed.

Rocky Mountain Biologicals, formed in 2004 and located in Missoula’s development park near the airport, usually makes cell culture media like serum and other products for the pharmaceutical, cancer treatment and veterinary vaccine industries.

Grant Kier, the CEO of the Missoula Economic Partnership, was familiar with the company from past conversations. Kier also knew there was an acute shortage of viral transport media for COVID-19 testing. Essentially, viral transport media is clear substance that's used in a testing kit to transport the swab from a patient to a lab. Without it, the viral sample would "die" and the test wouldn’t work.

“The viral transport media was a bottleneck in the process of getting tested,” explained Jeff Pease, the chief business development officer at Rocky Mountain Biologicals. “I don’t know the reason why it’s not more available, but Grant Kier and Nicole Finke at Community Medical Center informed us there’s a shortage. Others in the state are getting close to running out. They asked if we could make it.”

Pease said they hadn’t thought much about making the product, but he consulted with Jeremy Amberson, the chief operations officer at the company.

“We had a majority of components in house already,” Amberson said.

“That material will go out tomorrow,” Pease said.

Some of it will go to Community Medical Center, and the rest will go to 14 other hospitals and clinics all over the region. One is a “little tiny clinic” in eastern Montana, Pease added.

“I sent out an announcement to all hospitals and clinics that we were approved to make the product, and literally, after my email went out it didn’t take 10 minutes to get the first phone call,” he explained. “They just didn’t have the media. We’re getting calls from all over Montana, Idaho and Washington.”

Amberson said the facility has the capacity to make “a lot” of the product and they could theoretically ship it all over the country. Normally, the company makes batches of 3,000 liters of its usual serum product. The company has about 15 employees, and they’re working hard right now to make sure they’re ready if more orders come in. Rocky Mountain Biologicals is owned by Welgene, a South Korean company, and Pease said they are not to be confused with Rocky Mountain Labs, a government medical research facility in the Bitterroot Valley.

Pease said the two local hospitals, Providence St. Patrick Hospital and Community Medical Center, have been extremely cooperative. He also said the Missoula Economic Partnership played a crucial role as the “networker” between the company and the health care industry.

“I had a meeting with Grant (Kier) seven months ago and he remembered we did serum here,” Pease recalled. “He was in communication with us. We got the recipe from the Centers for Disease Control and the Mayo Clinic. Jeremy, the brains of the group, looked into it and said, ‘Yes, we can do this’.”

Lindsey Wallace, the communications director for the Missoula Economic Partnership, said it’s a “good news story at a time when there isn’t a whole lot of good news happening.”

“It's also an example of how quickly Missoulians rise to the challenge to meet community needs,” she said in an email to the Missoulian. “What’s also of note is they’re not concerned with profiting off the manufacture of the media — their primary concern is getting a crucial product into the hands of the labs that need it to ramp up testing and address the current crisis.”

Any hospital or clinic that needs the product should visit rmbio.com.

The rate of abusive head trauma, formerly known as "shaken baby syndrome," increased by 65% during the last economic downturn.

Booze, beer, wine and pot available for delivery in Missoula

A nice Burgundy wine on your front porch is only a phone call away.

The directive came just hours after Disability Rights Montana filed an emergency petition with the state Supreme Court to reduce the numbers of people who are now in or will enter jails and prisons across the state.

Rich Bridges has a Ph.D. in biochemistry from Cornell University, but there he was on Thursday using a power drill with an attachment to mix two simple ingredients into hand sanitizer.

Glacier County Commissioners are set to approve on Thursday an all-mail primary for the upcoming June 2 election.

A new mental and behavioral task force is working to make sure Missoula has supports in place for residents amid the coronavirus pandemic.

The agent who worked as a screening officer at the main checkpoint of Missoula International Airport. That person held the evening shift and last worked March 25, according to the agency.

People with questions can visit MontanaWorks.gov to see a list of frequently answered questions or call 406-728-7060.

The suspect is described as a white male, 30-40 years old wearing black pants, a black shirt and a baseball cap.

"We are concerned people may be avoiding seeing medical providers for other physical and mental health conditions due to COVID-19,” explained Megan Condra, director of marketing and community relations at Community Medical Center.

"We will never allow one's financial situation to be a barrier to accessing care. We're here for everyone, including those who are fully insured, those with no insurance and everyone in-between."

“If there’s any bright spot in this tragedy it’s people getting a new awareness of how important it is to be tapped into the local food system.”

Montana tourism businesses are seeing fewer long-term cancellations than other places in the U.S.

Janet Gates comforts those at the end of life

"End of life can be a great opportunity for patients and family to actually grow and heal."

"The viral transport media was a bottleneck in the process of getting tested," said Jeff Pease, the chief business development officer at Rocky Mountain Biologicals. "I don't know the reason why it's not more available, but Grant Kier and Nicole Finke at Community Medical Center informed us there's a shortage."