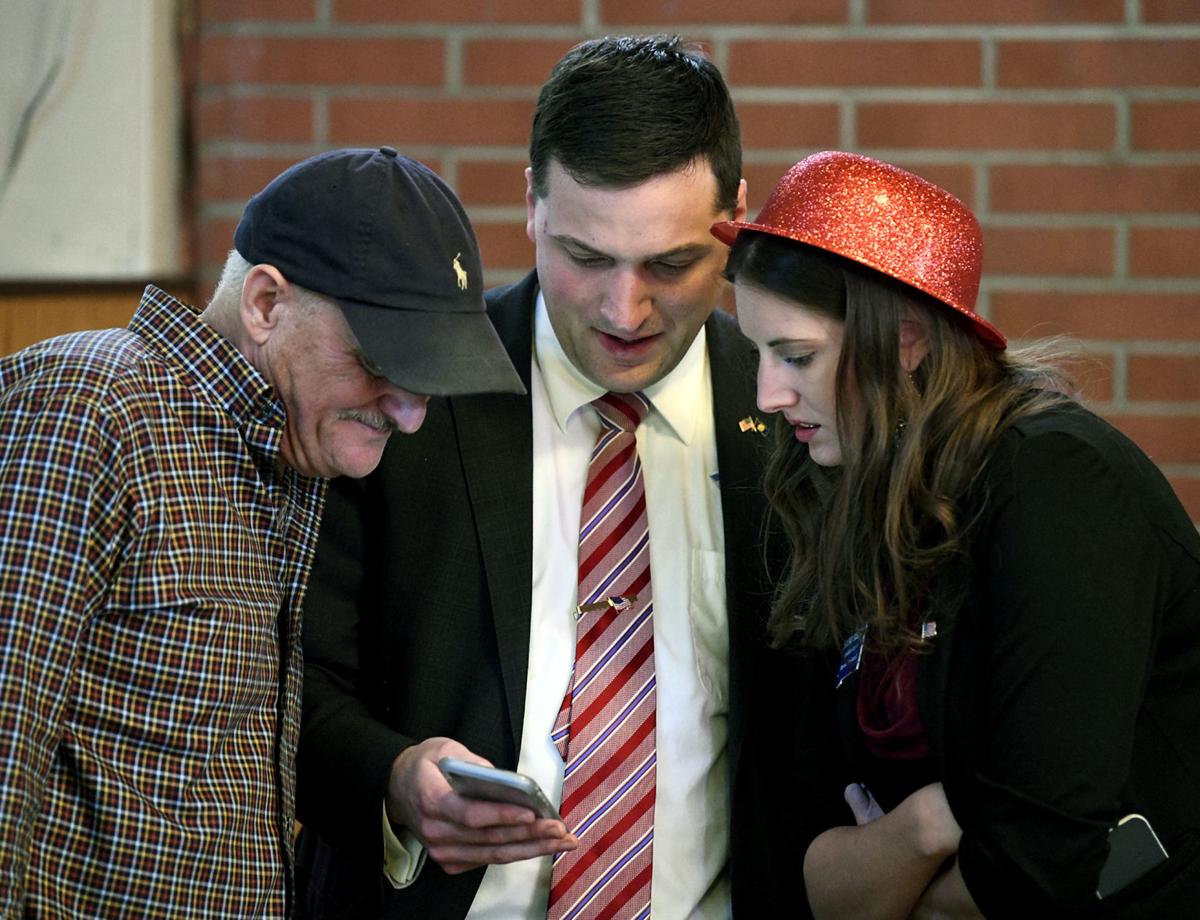 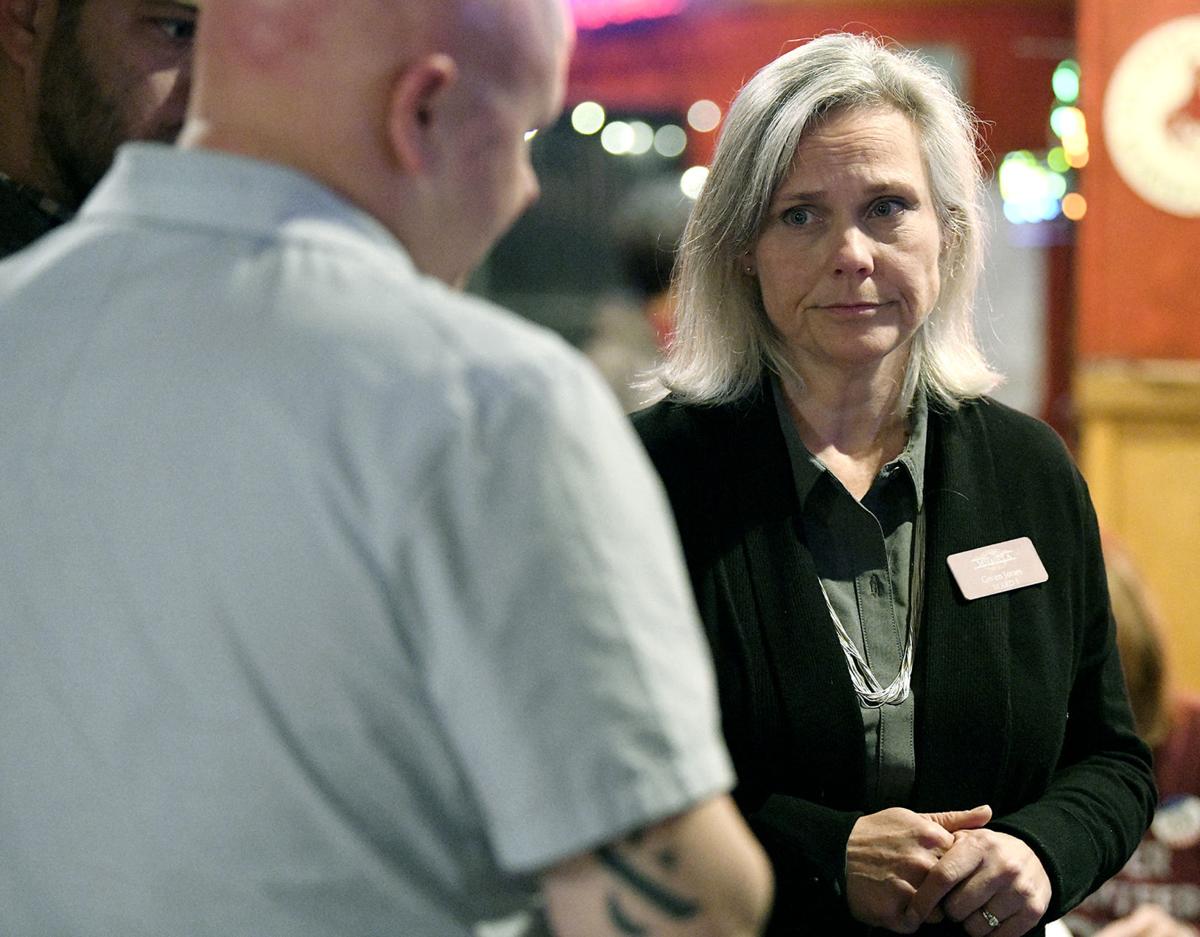 Missoula City Councilor Gwen Jones, who was up for reelection, talks with council candidate Nick Shontz as they wait for election results at the Union Club Bar on Tuesday evening. 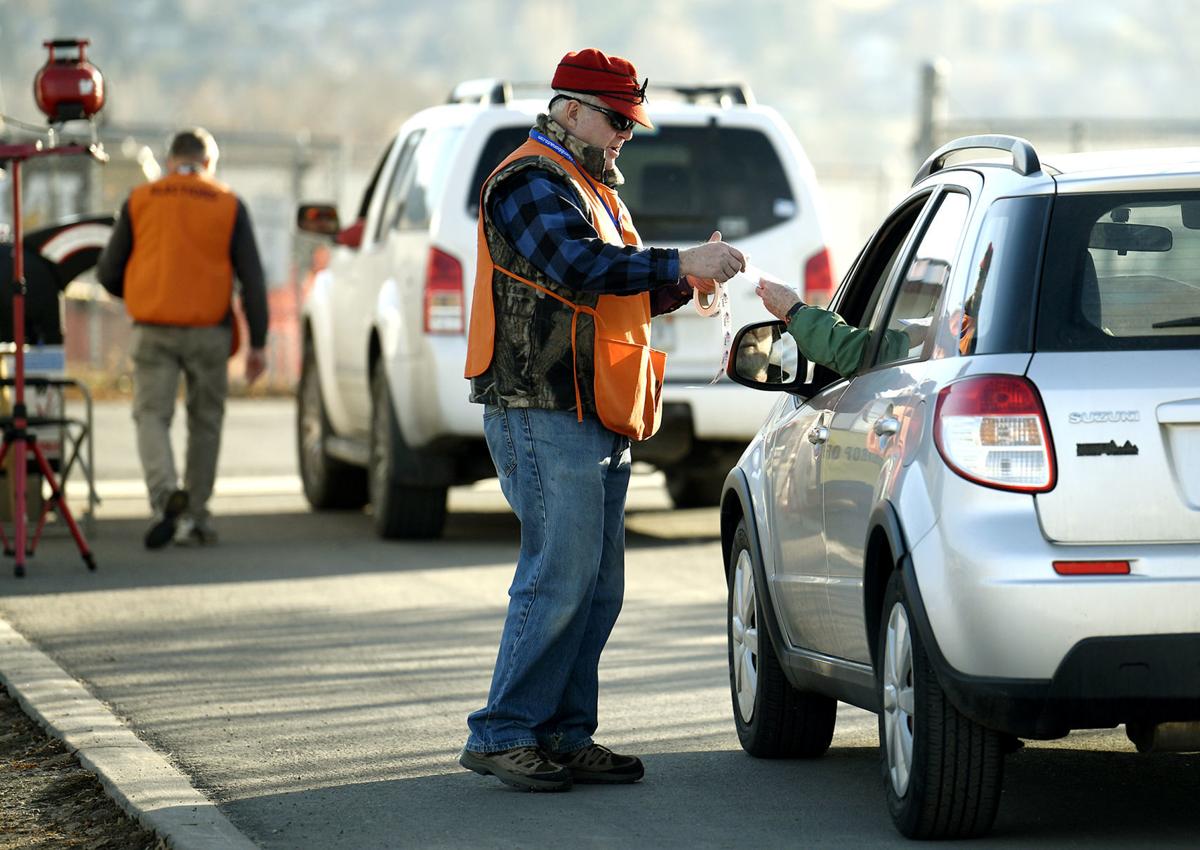 Vance Bennett collects a ballot from a voter at the ballot drop-off station at the Missoula County Fairgrounds elections office on Tuesday afternoon. The election is for Missoula City Council seats, as well as a bond issue for DeSmet School.

Missoula City Councilor Gwen Jones, who was up for reelection, talks with council candidate Nick Shontz as they wait for election results at the Union Club Bar on Tuesday evening.

Vance Bennett collects a ballot from a voter at the ballot drop-off station at the Missoula County Fairgrounds elections office on Tuesday afternoon. The election is for Missoula City Council seats, as well as a bond issue for DeSmet School.

The blue-hued Missoula City Council may look a little more purple after conservative newcomer candidates in two of six wards were ahead of liberal candidates — with more than half of the votes counted — following a campaign focused on rising property taxes and increased scrutiny of tax-increment financing.

One-term incumbent Heidi West maintained her seat on the council, with a large lead over Amber Shaffer, a self-identified Democrat backed by Councilman Jesse Ramos’ “Team Liberty” and the local Republican Party endorsement.

"I have mixed feelings about the results overall so far," West said. "City Council is a body and we debate and implement as a body, and I think that depending on how tonight turns out, it could be challenging to do that. Hopefully there will still be productive and solutions-based discussions."

West said she was amazed to see the difference between this race and her first four years ago, saying that she felt like the divided national climate had worked its way into the local sphere. She said she felt strongly that promises made by "Team Liberty" candidates  recruited by lone conservative Councilor Jesse Ramos couldn't realistically be upheld.

"We won't have less traffic in Missoula — we can't promise that — and I think it's alienating to some people to promise something we can't possibly actualize," she said.

Despite being backed by opposing party endorsements, West and Shaffer had overlapping views on many issues, such as supporting the city’s affordable housing plan and climate change plan.

Mirtha Becerra, the appointed two-year incumbent, appeared set to win her first election to the Ward 2 seat, fending off Brent Sperry, Ramos’ “Team Liberty” candidate. Becerra brings a decade of experience as a city planner in Missoula to the council, and has also served as the Homeword board president.

The race was expected to be tight, with the last contested race for a Ward 2 seat going to a conservative candidate running on a similar platform as Sperry. Additionally, the ward now includes the large swath of annexed, and potentially more conservative, rural land near the airport.

Gwen Jones soared to victory over Drew Iverson in Ward 3, carrying 81% of the vote. Iverson was the only local Republican Party-endorsed candidate not running as a member of “Team Liberty.”

Jones was expected to handily defend the seat, after gaining about 70% of the vote in the three-way primary.

Amber Sherrill, bringing support and leadership experience from her time heading up one of Missoula’s most prominent conservation nonprofits, Five Valleys Land Trust, appeared to secure a victory in Ward 4 over Alan Ault, another nonprofit leader.

The founder of Montana Auto Tech, and backed by "Team Liberty," Ault ran on a campaign advocating cutting city spending and ending tax-increment financing, but was only able to pick up 36% of votes in the preliminary results.

John Contos, the church-founder-turned-carpet-cleaning-business-owner supported by “Team Liberty,” was 200 votes ahead of Alex Fregerio in one of the most closely watched races of the election, with 2,375 votes cast total in the ward.

"I've looked at this as the right thing to do," Contos said at the "Team Liberty" election party at Red's Bar. "I didn't really go looking for this. I was kind of recruited by Jesse (Ramos), and my wife keeps saying I needed to do something else. But when he first mentioned it to me, I think I said absolutely not."

Contos described how he went to Ramos, a local wealth manager and City Council member, for financial planning and ended up getting convinced to at least attend a City Council meeting. He said that after seeing the lack of political diversity on council, he began to consider running.

"I guess I saw it as, if I lose, nothing changes in my life, but if I win, it's a big unknown, which is exciting but to be honest, not thinking too much about it yet," Contos said.

The ward was one of three targeted by a series of mailers funded through a political action committee called Missoulians for Missoula. The mailers were the only ones during the race to advocate explicitly against a candidate, a rare occurrence in Missoula municipal elections.

Ramos said he was still holding his breath on all of the races, with only about half of the expected turnout counted. But he said he felt the race had focused more conversation and momentum on his main ideals on council, such as limiting the TIF (tax increment financing) program. TIF collects a portion of property tax revenue in a specific district and reinvests it into that district.

Sandra Vasecka had a 100-vote lead in Ward 6 against Nick Shontz, which may signal the first time a conservative candidate is headed to a seat in the ward in at least a decade. If it comes, the flip won't be completely unexpected, as the ward has trended steadily less liberal in the last three municipal elections. But with only an estimated half of the votes counted, it was too close to make a definite call.

Vasecka, a “Team Liberty” candidate, ran on a platform of cutting spending through a zero-based budgeting system, but said she would not make any cuts to first responders, public safety, or infrastructure.

The $6 million DeSmet School Bond was expected to pass after early results, with a significant lead of supporters. The bond was up to the 500 eligible voters in the district to decide, and after the first 210 ballots were counted, voters favoring the bond led.

The Missoula City Council and DeSmet School bond elections wrap up Tuesday evening, and any straggling ballots need to make their way to a dro…