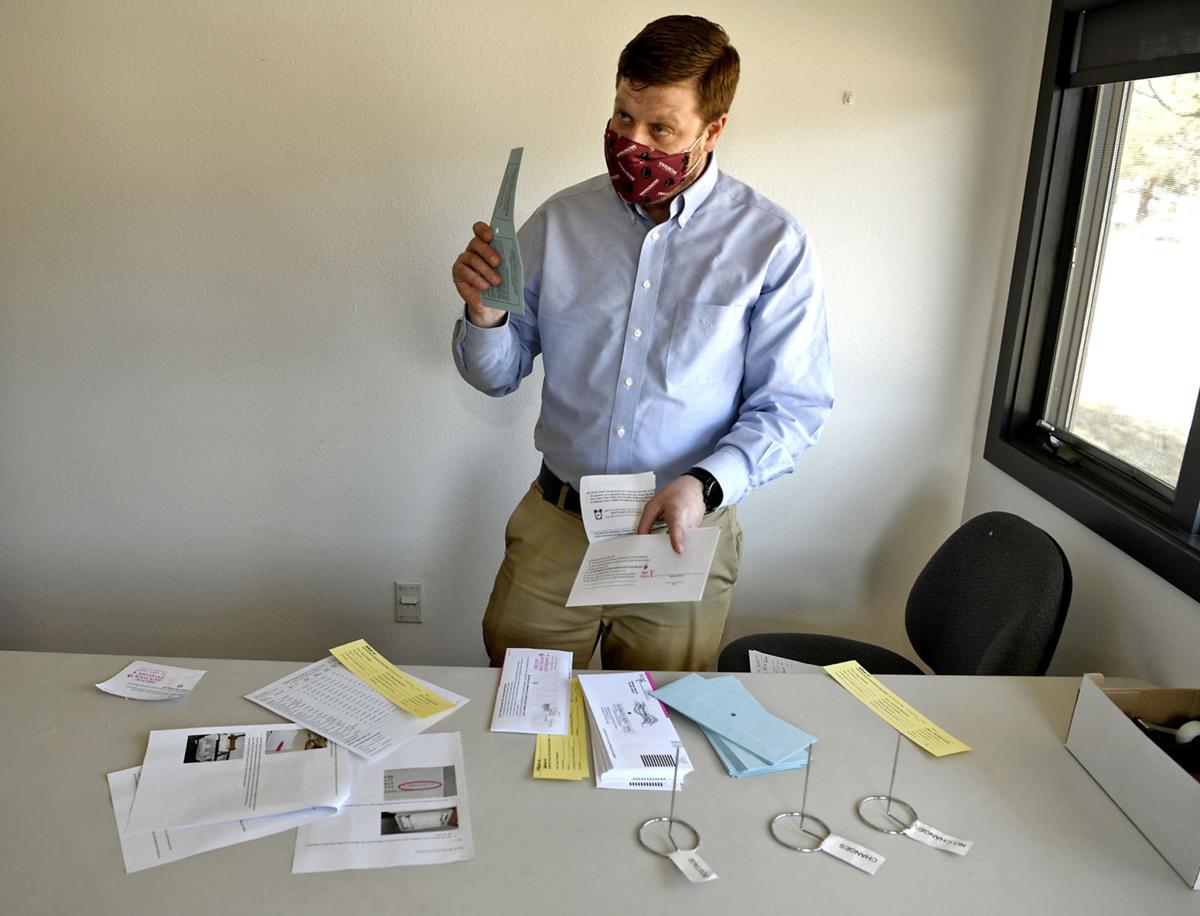 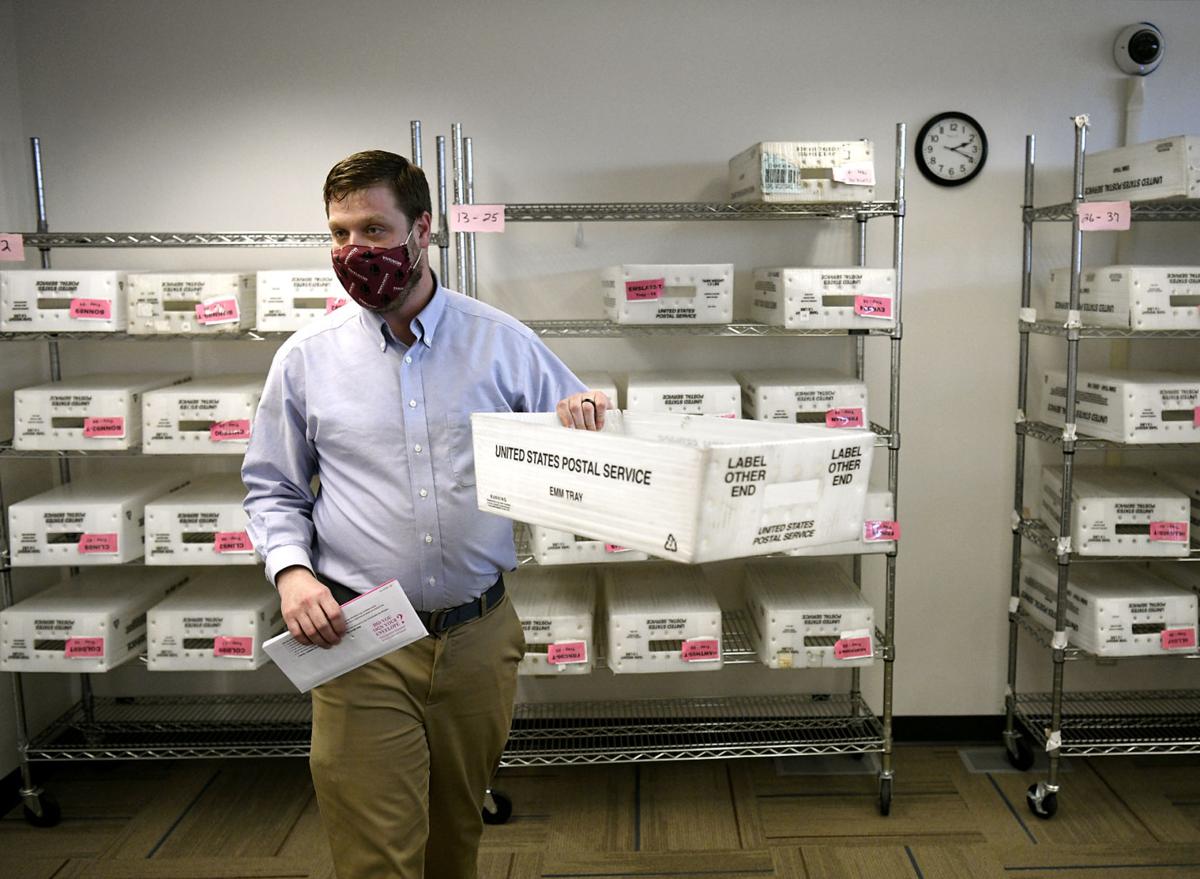 In April, Bradley Seaman shows the elections office room where ballots are stored after they have been verified and before they are counted.

Missoula County is pushing back hard against assertions by a local Republican-backed group that there were issues in the 2020 election in the county.

The group, led by Rep. Brad Tschida, R-Missoula, says 4,592 ballots countywide did not have affirmation envelopes, which need to be signed by voters and are used in the verification process.

The group filed an information request and obtained access to the county's affirmation envelopes on Jan. 4. They believe what they have found could have changed election results in Missoula County.

The county elections office says the group's numbers are wrong.

"I think that discrepancy comes from the aspect we do multiple double checks on this process, and while I feel the records requesters had the best intentions, the process wasn't really there," Missoula County Elections Administrator Bradley Seaman said.

"And without a process to double-check and confirm those numbers like we do multiple times, I feel like it just exponentially grows into an error of that magnitude," Seaman added.

Rep. Tschida recently sent a letter to Montana Secretary of State Christi Jacobsen detailing what he believes constitutes fraud in the Missoula County election. He retained a local lawyer, Quentin Rhoades, prior to the election.

Missoula County has drafted its own letter to Jacobsen's office, which will be sent next week.

Asked for a response to the county's letter, Rhoades pushed back. Rep. Tschida has not responded to multiple requests for comment.

"They voice some pretty strong opinions for people who were not personally present for the count. We used the counting and recording procedure suggested by the Election Office and the act of counting envelopes requires no specialized training or expertise. We are confident that our count is materially accurate," Rhoades wrote in an email. "Despite the allegations that our methods were inaccurate, our counters would be able to testify to the counts they personally arrived at in a court of law."

A group of around 20 individuals counted the affirmation envelopes in around five or six hours.

"The Election Office staff did monitor the counters, as they expressed a concern at some point that some of the envelopes could have been doubled-counted. If so, however, the envelope discrepancy would be even greater and, therefore, all the more troubling. The staff expressed no worry of any undercounting," Rhoades wrote.

Elections office staff, including Seaman, were present as the group counted the affirmation envelopes. This was to make sure no envelopes left the premises and all rules laid out for counting the envelopes were followed, including not photographing signatures on the envelopes out of privacy concerns.

The Nov. 3 general election saw 72,491 votes cast in Missoula County, according to data from the Secretary of State's office.

Under the Uniformed and Overseas Citizen Absentee Voting Act (UOCAVA), those outside the United States can cast ballots electronically. In the 2020 election, there were 612 UOCAVA voters who cast ballots electronically and another 61 UOCAVA voters mailed in ballots. There are also other affirmation envelopes which would have not been available under the information request.

Those envelopes or cover sheets, which number 708 in total, would have counted in the final vote tally, Seaman said. There also were no boxes of affirmation envelopes missing.

Rhoades responded to a question regarding electronically cast ballots.

"Upon inquiry, however, Mr. Seaman told me that these people were all given absentee ballots in envelopes, with the result being that every single ballot had an identical envelope, whether the voter voted in person, by mail, or by dropping ballots into collection boxes," Rhoades said.

While it is true UOCAVA voters are sent absentee ballots, they are not required to return a physical ballot.

Tschida's group also only counted the affirmation envelopes once, and Seaman thinks they miscounted, he said.

"The absence of a clear process and a double-check has equated to data ... that is misleading and concerning to voters," Seaman said. "And we always want to be open."

Each affirmation envelope has a barcode and 10-digit number unique both to an election and a voter. Those are tied to a verification program on a computer that has prior records of a voter's signature.

The signature on a computer and the signature on the affirmation envelope are compared. If it is verified in the database, a red line is put through the signature. There are two more physical double-checks of envelopes and ballots.

The group contends that, out of a random sampling of 15,455 mail-in envelopes, 55 lacked postmark dates and 53 never had their signature checked.

During the records review, 65 affirmation envelopes were flagged by Tschida's group because they did not have a red line.

Some of the affirmation envelopes did not have postmark dates because some ballots were returned in person to the elections office, he said.

"After this records review, Mr. Rhoades had come in here and asked to inspect them, so we graciously met him and allowed them to inspect these. Had there been any other discrepancy, if it was brought to our attention and truly existed, we would have set those aside and looked into a real investigation," Seaman said.

Tschida's group also says 28 signatures on affirmation envelopes from a nursing home looked similar. Seaman says those were not flagged.

Another point of contention with the group is that a video recording of the November vote count was not retained.

Missoula County goes by the state's recommendation, Seaman said. The state has a 30-day retention policy and the vote count video recording was requested by Tschida's group outside of the retention policy window.

"But a standard records retention is 30 days and they're destroyed at 30 days," he said. "That meets both policies."

Rhoades says he asked for the video 49 days after the election. He reads the Missoula County's retention policy in such a way that the county should have had the video for 60 days.

When asked broadly about the county's response to the group's allegations, Rhoades responded with a quote.

"I would simply quote Shakespeare’s Hamlet: 'The lady doth protest too much, methinks,'" he wrote.

UPDATED: D'Shane Barnett to be next Missoula County health officer

The city of Missoula will receive around $14 million in federal funding from the American Rescue Plan Act of 2021, while Missoula County likely will get around $23 million.

'We just felt that it was a good time'; Health department expands on vaccine decision

For the Missoula City-County Health Department and the county's Vaccination Coordination Team, the time was right to push Missoula County into opening up COVID-19 vaccinations for all.

A push and a plan for a sustainable future of transportation in Missoula continues to roll along.

The agency is looking to raise $85,000 this month for Meals on Wheels.

Missoula is set to preliminarily adopt an ordinance on Monday that would rezone a half-block in the Westside neighborhood, clearing the way for development on the property.

State Rep. Brad Tschida (R-Missoula) has announced he is running for state Senate in Senate District 49.

Missoula County officials believe it is one of the first counties in the nation to enact cryptocurrency mining ordinances specifically dealing with climate change.

More affordable housing funding is in Missoula's future, as the city is set to receive federal money.

Accusations by a local GOP group questioning the accuracy of Missoula County's 2020 election resulted in a flurry of charges and counter-charges last week.

One of the biggest questions Missoula faces in the coming months and years is what it will look like once the pandemic has passed.

Alden Tonkay, a Missoula Republican, has announced his candidacy for state House District 98.

Missoula City Council officially adopted a resolution last week to have primaries this election cycle, but the move was not without opposition.

Curdy currently represents House District 98 in the state house. He has represented the district since 2015.

Earlier this year, the Montana Legislature and Governor Greg Gianforte banned the practice of registering to vote on Election Day.

In April, Bradley Seaman shows the elections office room where ballots are stored after they have been verified and before they are counted.