Become a Member
Read Today's E-edition
Share This
Missoula fights back against sale of Mountain Water Co.
0 Comments
Share this
1 of 2 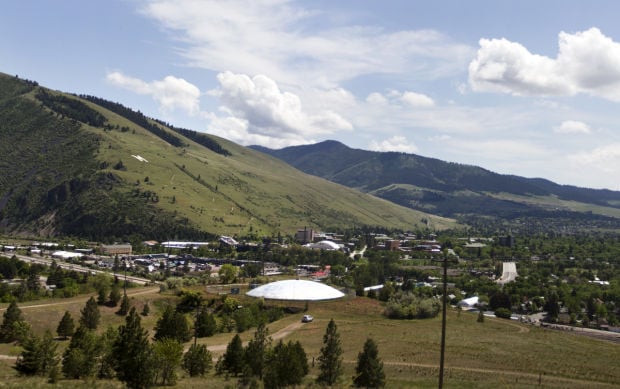 Mountain Water's 1 million-gallon dome reservoir sits on the north side of Missoula next to the Waterworks Hill trailhead.

Missoula’s drinking water system would be sold to a Canadian utility under an agreement announced Friday between Mountain Water Co.’s parent company and the potential purchaser, Algonquin Power and Utilities Corp. of Ontario.

The announcement came as the city of Missoula’s eminent domain case against Mountain Water and its owner, the Carlyle Group, heads toward a spring trial in Missoula County District Court. The news surprised local elected leaders, but Mayor John Engen said he does not believe the sale agreement is valid, given the condemnation proceedings.

“While they may have an agreement on paper, that’s far from reality,” Engen said at an afternoon news conference. “The reality is these folks (Carlyle) are going to have to deal with the city of Missoula.”

A news release from Algonquin estimated the sale price of Western Water Holdings (of the Carlyle Group) to Liberty Utilities of Algonquin at $327 million, including $77 million in debt. It also noted the deal, which includes Mountain Water and two California water systems, requires regulatory approvals in both states and is expected to close in late 2015.

The eminent domain trial is scheduled for March 2015.

“As Carlyle owns this company, Carlyle is embroiled in this lawsuit with us, and Carlyle is the company from whom we intend to purchase this in a court order,” Engen said.

Carlyle spokesman Christopher Ullman strongly disagreed. “We are confident we are going to prevail in court against this unjust government attempt to seize private property,” he said in a written statement.

In a phone call, Algonquin CEO Ian Robertson said the pending condemnation case does not make Mountain Water a “tainted asset.” Ultimately, he said, the court will decide if the city of Missoula has a right to buy the company, and if it does, the city can make the purchase from either Carlyle or Algonquin – for a fair price.

“I don’t think it’s an unfair statement to say that what we’re paying for the utility asset represents its fair market value,” Robertson said. “Obviously, there’s lots of precedent to establish how fair and just compensation is determined, but fair market value is probably the largest determinant.”

John Kappes, president of Mountain Water, was unavailable Friday for interviews, but he issued a statement. He said he hopes the community will welcome Liberty Utilities.

“We at Mountain Water Company are very pleased to hear that our company is going to be part of a long-term utility owner that understands and supports a local, responsive and caring approach to the provision of utility services,” Kappes said. “Liberty has a long history of providing reliable utility service in other communities and is committed to making continued investment in Missoula’s water distribution system.”

At the news conference, Engen said the announcement confirms the Carlyle Group cannot be trusted in its dealings with the city of Missoula.

“Carlyle says, ‘We don’t have to pay property taxes.’ (The Montana) Department of Revenue says, ‘Yeah, you really kinda do.’

“Carlyle says it’s not for sale. Turns out, it’s for sale,” Engen said.

If anything, the mayor said, the proposed agreement confirms the city of Missoula is on an essential path in its quest for public ownership of the water utility. For one thing, he said, the $327 million transaction will come partly from the people of Missoula in the form of higher bills or less infrastructure improvement.

“That’s money out of our pockets as ratepayers,” Engen said. “It’s somebody getting laid off or it’s less investment in the company.”

If necessary, the city of Missoula may seek to prevent the sale in court with an injunction, he said. However, the mayor also said because the city took legal action, ownership of the water company is in the hands of the District Court judge – not in the hands of the companies signing the deals.

“The court has assumed jurisdiction over our eminent domain proceeding, which will trump any other proceeding,” Engen said. “These guys aren’t going to be able to do this transaction without dealing with the court and dealing with us.”

The mayor said the pending agreement does not change the city of Missoula’s estimate of the value of the company.

In 2011, the Montana Public Service Commission approved the sale of Mountain Water to Carlyle as part of a package deal. The sale price of $102 million bought Mountain Water and two other water companies in California, Park Water and Apple Valley Ranchos, according to the order from the PSC.

The proposed sale announced Friday was for an estimated $250 million without debt. Last year, the city of Missoula offered as much as $65 million for Mountain Water, and then with the support of the Missoula City Council, it made an official offer of $50 million.

Engen said he does not believe the city of Missoula should have offered more for the company because his responsibility is to acquire the system for a fair price.

The mayor also said he does not believe the city of Missoula should have tried to use its power of eminent domain before the sale to Carlyle. Such a move would have been too complex at the time, he said.

In the condemnation case, the city of Missoula alleges Carlyle pulled a “bait and switch,” making a verbal pledge to sell Mountain Water to Missoula in exchange for its political support, then reneging its side of the bargain. Carlyle, however, maintains it has honored its written agreement to consider in good faith any offers from Missoula.

Earlier this week, Mayor Engen and lawyers from Boone Karlberg updated the Missoula City Council on the pending condemnation case. Council President Marilyn Marler said the report has fueled her belief the local water system should not be a profit source for outsiders, and she said the release Friday from Algonquin presumes the purchase will go through.

“They haven’t bought it. I don’t think they’re going to be able to close on a deal with Carlyle until our current situation is resolved,” Marler said of the pending litigation.

The city of Missoula’s experts, though, had estimated the municipality’s ability to bond for the utility was maxed out at an estimated $70 million, given current revenue and interest rates, he said.

“I’m just afraid the mayor is getting advice from people who are paid by the hour, and they want to keep working,” Hertz said.

In 2011, Councilwoman Caitlin Copple campaigned on the issue of public ownership of the water utility. She, Marler and councilors Jason Wiener, Bryan Von Lossberg and Annelise Hedahl attended the mayor’s news conference.

If the sale to Algonquin goes through, the high price eventually will trickle to water customers here, Copple said before the conference. She said the path to ownership has been more rocky – and pricy – than anticipated, but the proposed agreement is reason for public ownership.

“I think it supports the city’s argument that under ownership of a conglomerate like Carlyle or Algonquin, we’re going to see rates increase to support out-of-state overhead – not the infrastructure of the water that’s serving our town.”

Algonquin CEO Robertson said he plans to be in Missoula next week, and he will visit with city officials at the time. He said he understands sometimes cities believe they are best served by buying and running their own water utilities, but he hopes to show the benefit of having Liberty Utilities at the helm.

“We’re coming to the city of Missoula with what I think is a credible track record of being a long-term owner of utility assets,” Robertson said.

Algonquin’s mantra in its relationships with communities is to be “local, responsive, and caring,” he said. Whereas Carlyle’s objective is to invest in businesses, Algonquin’s aim is to hold and run the utilities it buys, he said – and it has done so since 1988.

“We’ve never sold anything we’ve ever bought in the utility business,” Robertson said.

The Montana Public Service Commission regulates private utilities in the state. Chief legal counsel Justin Kraske said the agency has not yet received an application for sale approval so he cannot comment on any specific requests.

“We’ve had a pretty significant history of approving and reviewing transfers, including the (one to Carlyle),” Kraske said.

Ed Janecek does not want the Carlyle Group or a foreign company to own Mountain Water Co. The ranch owner in Miller Creek believes in the rights of the private sector, but he wants the city of Missoula to own and operate the water utility.

CEO Ian Robertson said Algonquin Power and Utilities Corp. is coming to Missoula with a credible track record of owning and operating utilitie…

The announcement that the Carlyle Group intends to sell Mountain Water Co. to a Canadian utility has heightened local interest in the water sy…

Canadian company says it will keep all Mountain Water employees

Mountain Water president to get 'substantial benefits' in Algonquin sale

The president of Mountain Water Co., John Kappes, stands to receive what are termed as “substantial benefits” if the company is sold to a Cana…

Mountain Water Co. employees broke their silence this week in the city of Missoula’s condemnation case and pushed back against allegations the…

Already, the city of Missoula has exceeded its original estimate for legal costs in its quest to take over Mountain Water Co.

The Montana Consumer Counsel relied on bad math – and the wrong facts – in challenging a water company rate increase, according to Mountain Water Co.

The city of Missoula is alleging the Montana Public Service Commission held “unlawful ex parte communications” with Mountain Water Co. and The…

Survey: Missoula water customers pay more than most in Montana

Turning on the tap in Missoula costs more than it does in many other Montana cities, but flushing the toilet is cheap.

Should the city of Missoula continue its fight for control of Mountain Water Company?

Mountain Water's 1 million-gallon dome reservoir sits on the north side of Missoula next to the Waterworks Hill trailhead.