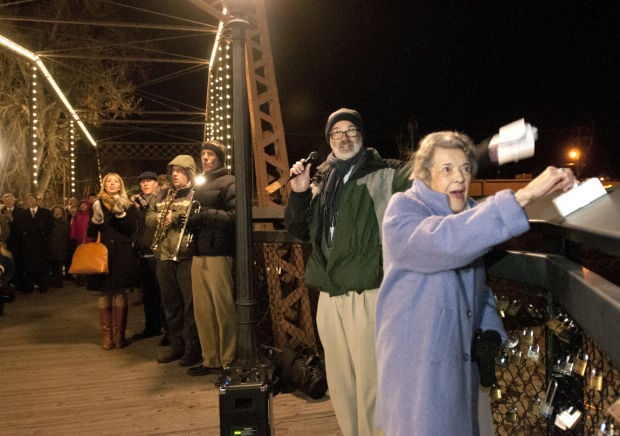 Emma Lommasson switches on the new lights on the Van Buren Street footbridge in Missoula during an event Thursday to mark the completion of the project. Fundraising by the nonprofit group Light Our Bridges Missoula helped bring about the lighting project. 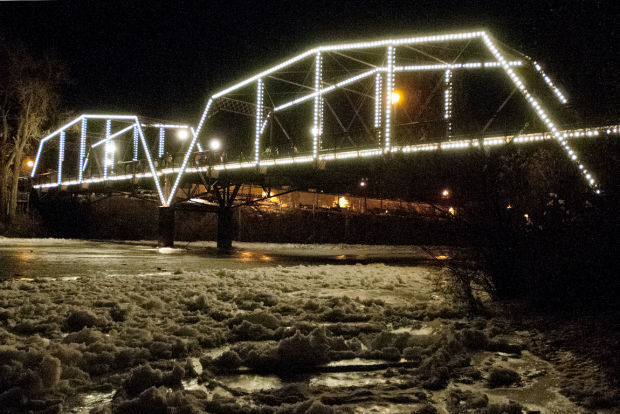 Emma Lommasson switches on the new lights on the Van Buren Street footbridge in Missoula during an event Thursday to mark the completion of the project. Fundraising by the nonprofit group Light Our Bridges Missoula helped bring about the lighting project.

Suddenly, several hundred small LED bulbs on the supports of the Van Buren Street footbridge lit up to applause and cheers from a hundred-some supporters who bundled up for the cold to see it firsthand.

"I think they look beautiful," Lommasson, 102, said after the ceremony.

She marveled that 86 years ago when she was a freshman at UM, it was the only route to walk downtown, and it certainly wasn't lined by conveniences like a shopping center.

But there she was, "crossing it again" after the ceremony, where she was encircled by well-wishers and cameras, joking that she felt like "a movie star."

Light Our Bridges Missoula spokesman Geoff Badenoch said the bridge was a citizen project and Lommasson's decades of work as a teacher, staff member, student adviser and registrar at UM made her an ideal choice for flipping the switch.

Badenoch also thanked the community members who helped the project come to fruition. Those include Alan Bronec of CTA Architects Engineers for the design, Tom Boone and Daniel Lambros for spearheading the effort, and Liberty Electric for completing the work despite unexpectedly cold temperatures the week prior.

The trumpet fanfare was provided by John Driscoll and Brendan McGlynn of the Missoula Symphony Orchestra.

The bridge-lighting concept was inspired by designs in Europe.

They gathered input of the Missoula City Council, the county commissioners, the public art committee, the Chamber of Commerce and the Missoula Downtown Association.

They also sought public input and refined the design, eventually scaling it back to include only the Van Buren footbridge and the Madison Street footbridge. The total cost was $170,000 in private money.

Badenoch said initial designs that included blinking lights and other flashier elements were criticized as ill-fitting for the city's character, and the current design was created.

Badenoch said that the city will save money because LEDs are more energy-efficient and brighter.

Next spring, the cables of the Madison Street pedestrian bridge will be lit.

Watch a video from the bridge-lighting ceremony, online with this story.

Workers from Liberty Electric have been busy installing LEDs on the Madison Street pedestrian bridge, the second phase of the Light Our Bridge…

Longtime University of Montana employee, alum and volunteer Emma Lommasson died Saturday at the age of 107.