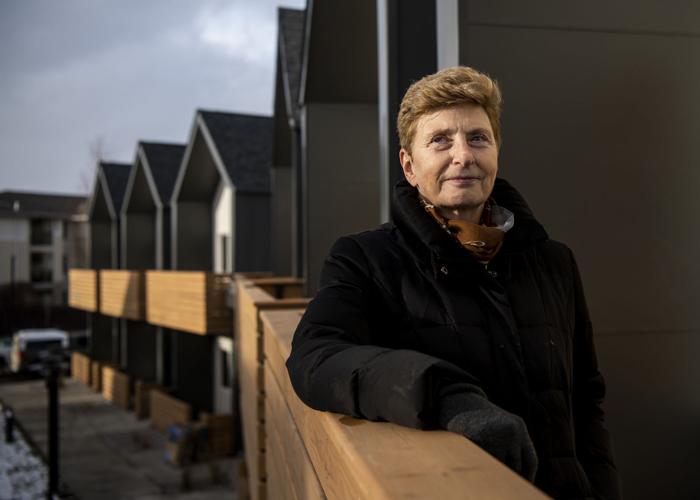 Lori Davidson, executive director of Missoula Housing Authority, stands on the balcony outside one of the units at the Cornerstone Apartments in Missoula on Tuesday. The new complex features 12 single-bedroom units for "extremely low-income people." 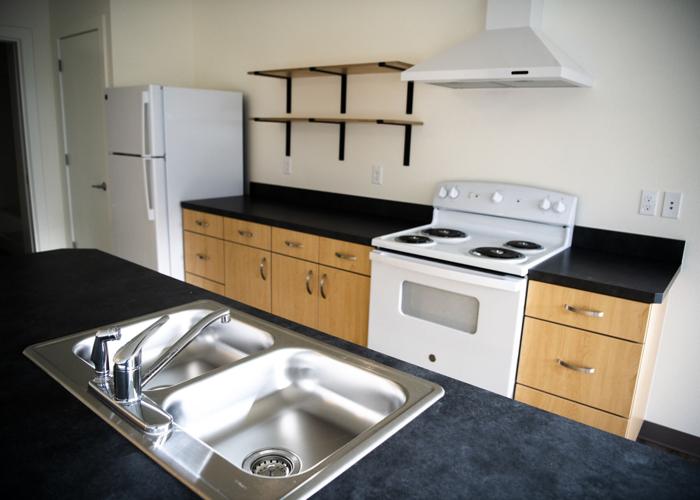 The apartments are built, owned and operated by the Missoula Housing Authority. Each unit is designed to increase energy efficiency as part of the "carbon offset" initiative. 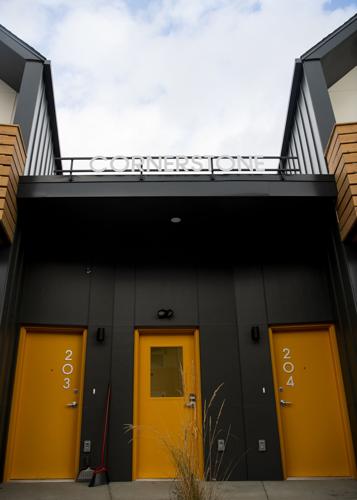 The complex has a projected completion date for Nov. 15.

The Cornerstone Apartments aren't only providing 12 new homes for people who would otherwise live on the streets in Missoula — although before the end of the year they will accomplish that goal.

So said housing and energy conservation leaders Thursday during a virtual tour of the units and Zoom discussion of how the homes came to be.

Collin Bangs, chair of the Missoula Housing Authority's Board of Commissioners, said the idea came from a visit nine or 10 years ago to New Orleans, where he and others from the Garden City witnessed a project providing housing to "the most chronic of the chronically homeless." He said almost no one who gained housing returned to the streets, and the Missoula crew put the item on its list of things to do.

"Twelve units does not solve the chronic homelessness problem in Missoula," Bangs said. "But it's the first step. You have to remember that all great journeys begin with a first step. This is a beautiful step."

Amy Cilimburg, executive director of Climate Smart Missoula, said the project also showed a way the community can make good on a variety of commitments that may seem to be at odds or challenging to pursue. In the Cornerstone Apartments, she said, advocates for housing, climate and equity came together and advanced their different missions.

"Cornerstone demonstrated that with collaboration, creativity and persistence, we can marry these (goals)," she said.

Lori Davidson, executive director of the Missoula Housing Authority, said the 12 spacious and comfortable apartments will provide "new beginnings for some of our community's most in need." Next to the Valor House off Mullan Road, they're 700 square feet and have balconies, front porches and bright yellow doors.

Built on land the agency already owned, the units will serve "extremely low-income residents." A project website notes the homes are for people earning less than 30% of the area median income, and vouchers will subsidize the rent. Additionally, Cornerstone will give priority to "frequent users of the city's emergency response systems."

The project faced challenges, Davidson said. When it was first out to bid, construction costs spiked and the price tag came in "hundreds of thousands of dollars" over the project budget (see related box for funding sources). The team worked for three months with Edgell Builders and MMW Architects to find ways to reduce costs without sacrificing quality, Davidson said.

A solution emerged that made the project more affordable for the housing authority, saved energy, and helped another organization offset its own carbon footprint. 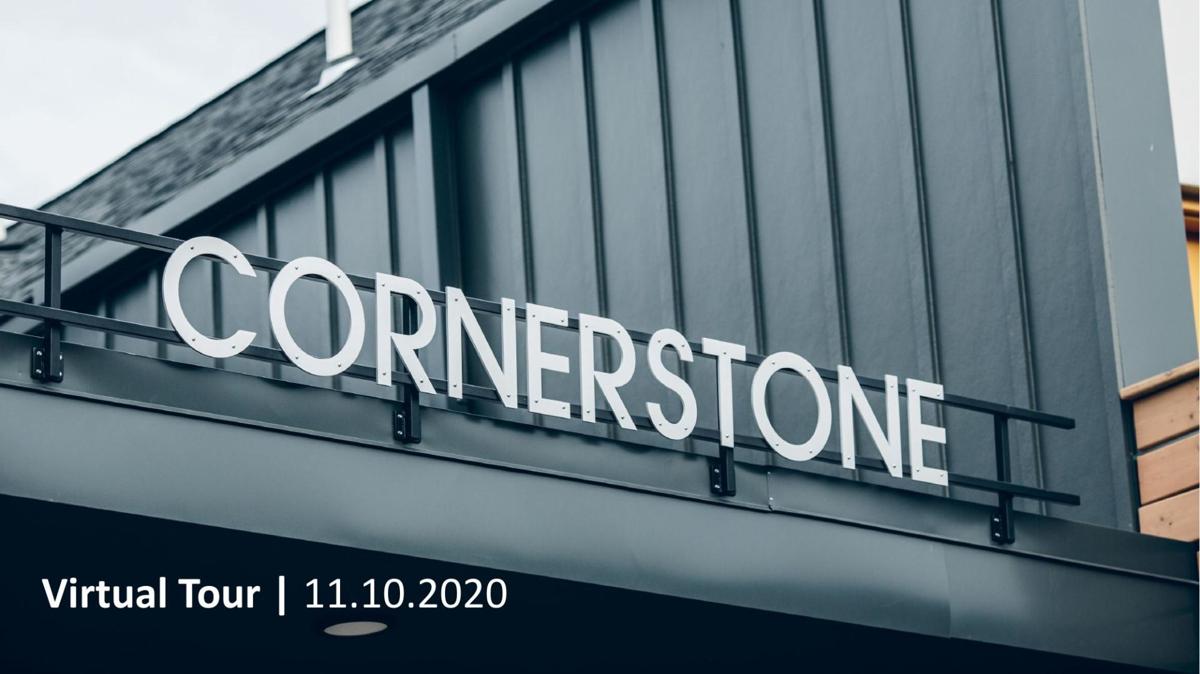 When the housing authority needed to shave costs, the efficient heat pumps the team wanted to install were on the chopping block.

"(Then), Climate Smart and Clearwater Credit Union came to the table with a new idea, and it worked out really well," said Colin Lane, of MMW Architects.

Meanwhile, Climate Smart Missoula was establishing just such a local option, a way that entities interested in paying to offset their own emissions could help another party reduce greenhouse gases. As such, the Cornerstone Apartments launch the Missoula Footprint Fund, missoulafootprintfund.org.

"What's unique here is the ability to purchase local carbon offsets and in turn help the community meet high quality housing for those in need and address climate change," Cilimburg said.

The efficient heat pumps remained, and the lower energy and operations costs that result are estimated to save the housing authority $10,000 a year.

And Cilimburg said this development is just the beginning.

"The hope of Climate Smart is to find more of these projects," Cilimburg said.

Mayor John Engen (D): "I continue to be grateful to live in and serve a community that believes that housing is a human right and that we have a collective responsibility to ensure that we invest in creating homes for our neighbors who will never get there without us. Thanks to MHA, Climate Smart, Clearwater and all of the partners who once again cobbled something amazing together through collaboration."

U.S. Sen. Jon Tester (D): "... Congratulations on completing Cornerstone Apartments — a very appropriate name as quality, affordable housing is the cornerstone in the fight against homelessness.

You’re taking a critical step towards addressing Missoula’s need for low-cost housing, providing the most vulnerable folks in your community with a warm, safe place to call home. ...You have my word that I will continue to support affordable housing programs at the national level, because it’s absolutely critical that you have plenty of funding and access to programs that will help organizations like the Missoula Housing Authority continue doing what they do best — fighting homelessness and helping those in need."

The Missoula Housing Authority outlined the following funding sources for the Cornerstone Apartments:

There are currently 946 active cases across Missoula County, with more than 1,500 close contacts.

The Missoula County coroner identified Jesse James Kale Brown as the man who died Saturday after a shooting. Missoula police said an officer shot a man who refused to drop a knife.

Lori Davidson, executive director of Missoula Housing Authority, stands on the balcony outside one of the units at the Cornerstone Apartments in Missoula on Tuesday. The new complex features 12 single-bedroom units for "extremely low-income people."

The apartments are built, owned and operated by the Missoula Housing Authority. Each unit is designed to increase energy efficiency as part of the "carbon offset" initiative.

The complex has a projected completion date for Nov. 15.