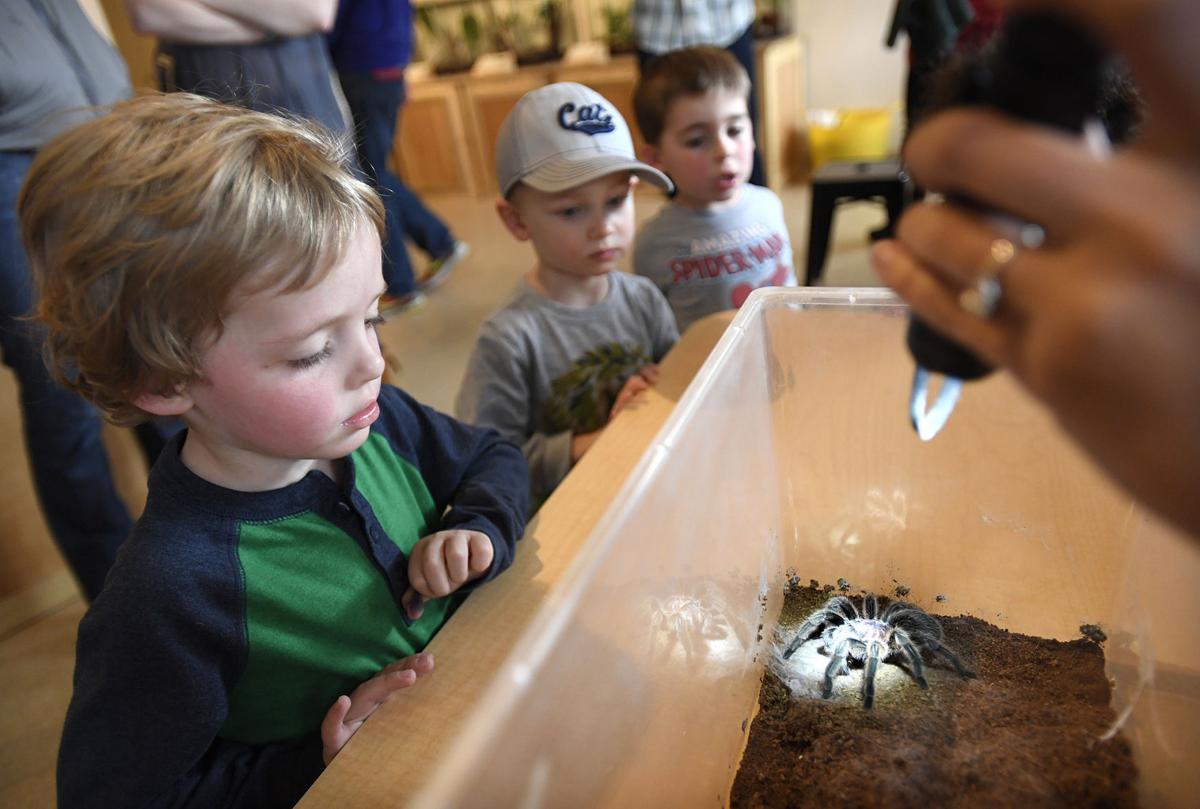 Keith Frazee, 4, looks onto a Chilean rose tarantula feeding on a cricket at the Missoula Insectarium on Saturday afternoon. The public can watch an employee of the insectarium feed a different predator every Thursday at 3:30 p.m. and Saturday at 2:30 p.m. 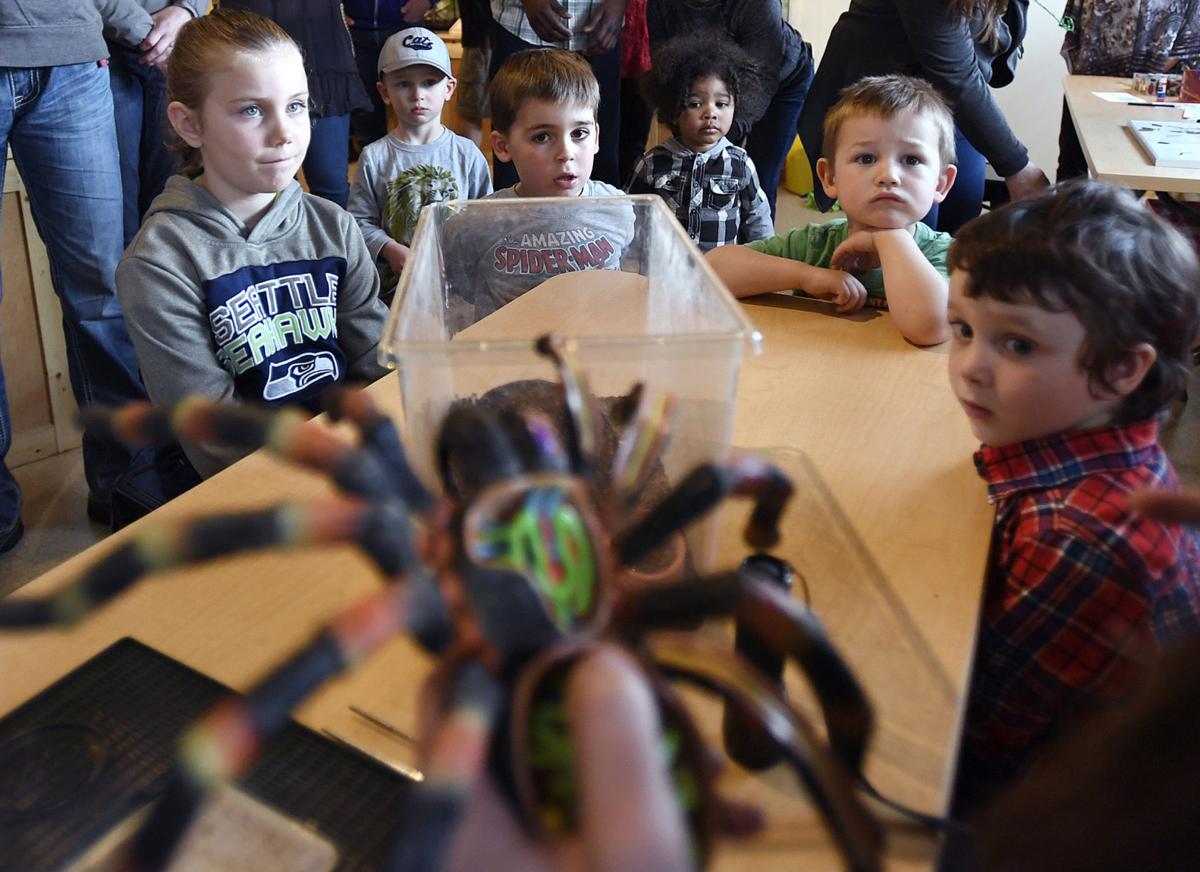 The tarantula digests the cricket by liquefying its prey, in this case a cricket, with it's fangs. Then it will wrap it in silk before digesting the liquid.

As Madeleine Hull dropped a live cricket near Rosie, one of several Chilean rose hair tarantulas kept by the Missoula Insectarium, the surrounding children watched in anticipation, waiting for the moment Rosie would attack and inject it's prey with paralyzing venom.

The children, most of whom were at the insectarium Saturday afternoon for a friend's birthday party, struggled to keep their hands off the table and away from Rosie's glass cage, an instruction Hull had given in order to keep Rosie from feeling too scared to eat. Tarantulas, Hull said, are prone to stage fright.

Hull, the museum interpreter, explained that because tarantulas have poor eyesight, the predators use body hairs to feel the vibrations of small, edible insects. If too much movement came from the table Rosie's cage sat on, Hull said the spider would become confused, scared and unable to find her prey.

Luckily for the surrounding anxious children, the cricket made a fatal error. In an attempt to escape, it jumped high and landed directly beside Rosie, who quickly captured and stabbed the cricket with its venomous fangs, paralyzing it immediately.

Hull explained that Rosie, rather than chewing its food, would eventually liquefy the bug, turning it into a "cricket milkshake." Then Rosie would lay a bed of silk and wrap the insect in it, similar to a "cricket burrito."

"Any questions?" Hull asked the kids, who each responded by shouting questions at once.

One such child was 3-year-old Gillian Doherty, who had been holding a beetle in the 'Animal Encounter Area' moments prior to the usual Saturday predator feeding segment. Jen Doherty, Gillian's mother, said both her children love bugs.

"Here they'll let the kids handle the bugs," Jen said, laughing. "And they love that. They just eat it up."

Hull said visitors are allowed to handle most beetles and walking sticks, but the insectarium has yet to own any hand-friendly tarantulas. Hull said while kids' birthday parties at the isectarium are common, adults are also welcome to hold bug-related events.

"We want to emphasize that it's all ages," Hull said, adding that the insectarium even holds a monthly event called 'Bugs 'n' Brews," where adults can purchase two beers for $5 while attending an expert lecture on an insect-specific subject. Each month the insectarium adopts a new theme that the lecture correlates with.

Hull said the Missoula Insectarium's bugs are typically donated by people who couldn't care for their pets anymore — tarantulas can live up to 20 years — or they're ordered from an online insect breeder. The butterflies arrive at the insectarium every Friday on FedEx trucks, Hull said.

While there are butterfly houses and insectariums all over the U.S., Hull said this is Missoula's only bug museum. It's small now, but Hull said they hope to expand to a much larger building with a wider variety of insects within the next three to four years. The plan is to have a full-sized, tropical butterfly house, large enough for people to walk through.

Still, at its current location and size, Hull said the insectarium has a decent group of regulars, including Brandon Robson and his 1-year-old, Luca.

Robson said he and his son visit the insectarium once or twice a week. They even purchased a family membership, Robson said, which allows them to come to the insectarium any time without having to pay general admission.

"He talks about Polly all the time," Robson said, as he watched his son looking at insects through a magnifying glass. "This is a great place to either stop in for 15 minutes or stay for an hour. We love it."

Polly, a goliath bird-eating spider the size of a man’s hand, sat motionless in her tank looking like a giant, fuzzy fist while an audience of…

Keith Frazee, 4, looks onto a Chilean rose tarantula feeding on a cricket at the Missoula Insectarium on Saturday afternoon. The public can watch an employee of the insectarium feed a different predator every Thursday at 3:30 p.m. and Saturday at 2:30 p.m.

The tarantula digests the cricket by liquefying its prey, in this case a cricket, with it's fangs. Then it will wrap it in silk before digesting the liquid.