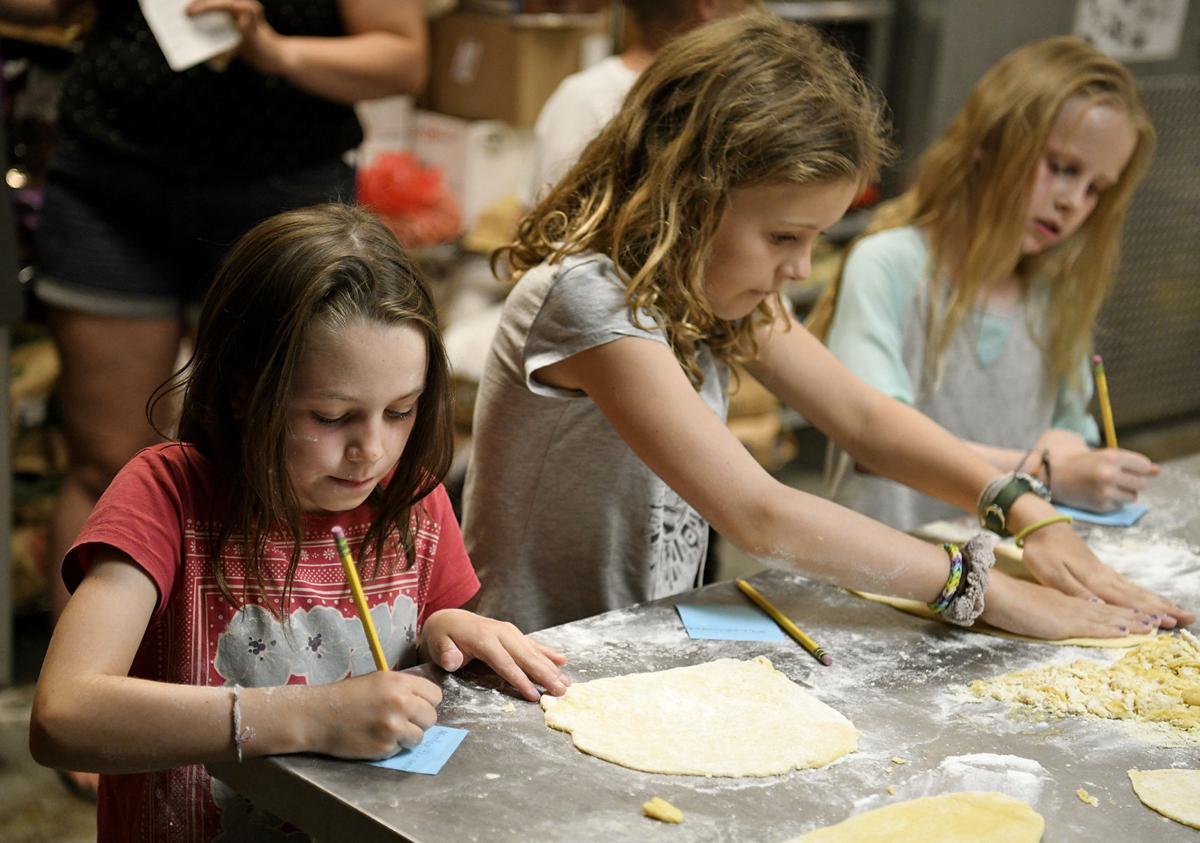 Fourth-graders Franny Semmens, Ada Stafford and Claira Seib, from left, work on making pasta dough and writing haiku about the experience on Monday at Caffe Dolce in Missoula. The three are part of a summer camp hosted by the Missoula Writing Collaborative that encourages kids to write poetry. 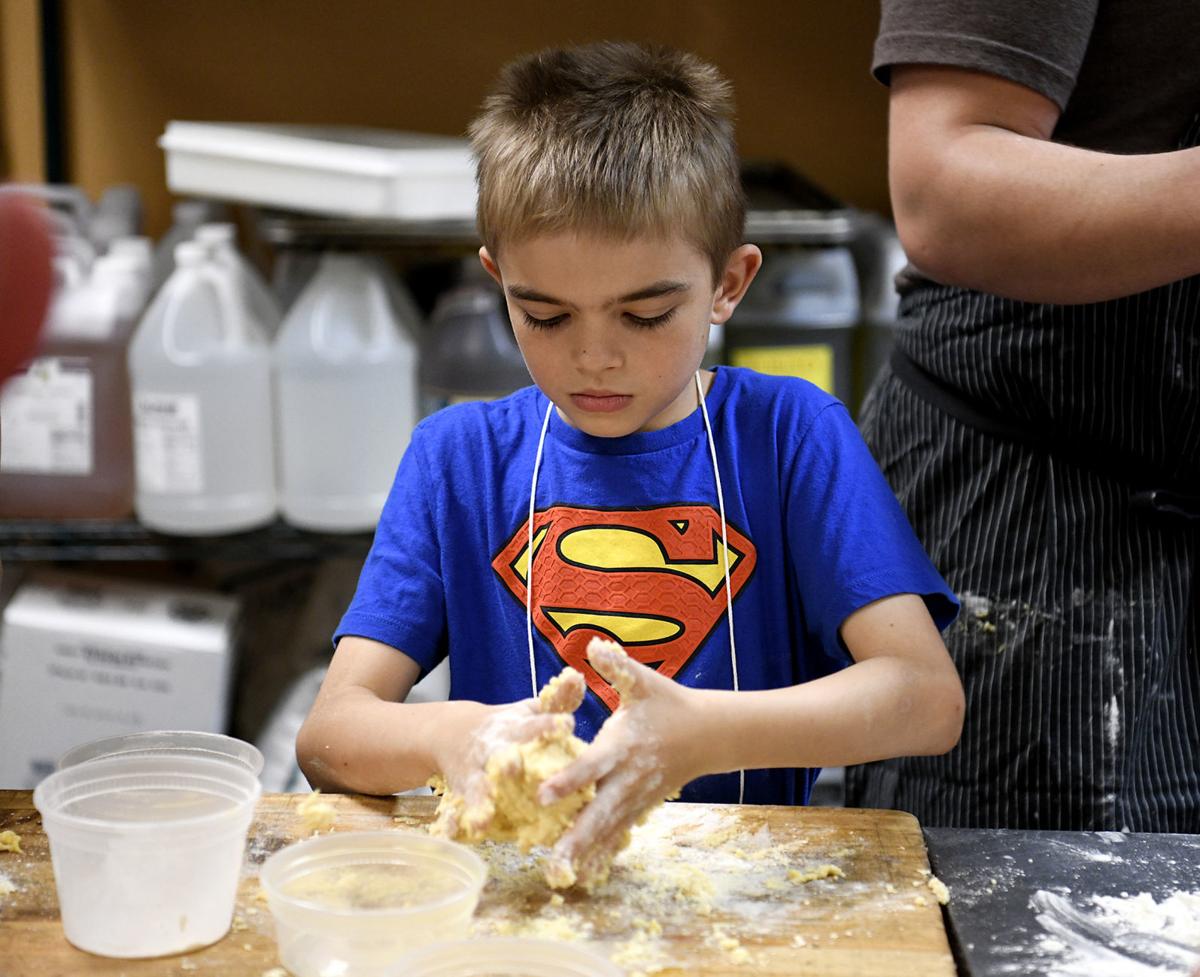 Fourth-grader Logan Fife makes pasta dough before writing a haiku during the Words With Wings summer camp on Monday.

Fourth-graders Franny Semmens, Ada Stafford and Claira Seib, from left, work on making pasta dough and writing haiku about the experience on Monday at Caffe Dolce in Missoula. The three are part of a summer camp hosted by the Missoula Writing Collaborative that encourages kids to write poetry.

Fourth-grader Logan Fife makes pasta dough before writing a haiku during the Words With Wings summer camp on Monday.

Twenty-one kids spread out along the sidewalk in front of Caffe Dolce Monday, with some talking in groups of two or three, and others off by themselves reading a book.

Nick Littman, the program director for the Missoula Writing Collaborative, stepped out of Caffe Dolce and called them to attention.

“We’re going down into the depths of Caffe Dolce, and we’re going to make some pasta,” he said.

The kids who followed him into the basement level spent their afternoon making noodles from scratch, then wrote haiku about their experience as part of their first day of “Words With Wings Summer Camp” hosted by the Missoula Writing Collaborative.

The nonprofit, founded by Montana Poet Laureate Sheryl Noethe, has offered the weeklong camp for students ages 8 to 14 for the past 14 years. Throughout the week, those enrolled work with Missoula Writing Collaborative instructors to produce their own poetry. On Monday, they focused on haiku, three-line poems with five-syllable first and third lines, and a seven-syllable second line.

They also visit sites around Missoula for inspiration, such as the Montana Museum of Art and Culture, Fort Missoula and the kitchen at Caffe Dolce.

“What we try to do is to get kids to write about what they feel, to get them using all of their senses,” said Executive Director Caroline Patterson.

Patterson said more children attended last week’s camp than any year before. Although fewer students registered for the second camp session, they will still be writing poems throughout the week. An anthology will also be printed for them to take home.

“Once they learn to work with the world they inhabit, they can become incredibly prolific,” said Patterson, who began writing poetry in the fourth grade.

When the students entered the Caffe Dolce kitchen Monday, they found cups of oil, salt, egg and flour waiting for them. Sous-Chef Trent Welton walked them through combining the ingredients to create their own ball of dough.

Some of the ingredients ended up on the floor, and an argument broke out with some students over whether raw eggs were lethal, but within a few minutes each of them produced a palm-sized bit of dough. They shared rolling pins and prepared the dough to be fed into the pasta machine.

While Welton hung their strands of pasta to dry on a rack, the students washed their hands and grabbed sticky notes to begin their haiku.

“One of the most vital parts about this is that it fosters both creativity and critical thinking,” said Littman. “Poetry is a little more accessible to them since they’re younger, but they’re still having to take in what’s around them and write about it.”

Littman said the week of writing also gives certain students who may be introverted a way of “finding their voice through a different form of expression.”

“I’m absolutely blown away by what the students, most of being just 10 years old, can think and write about when given the chance to do so,” he said.

Once she handed her dough to Welton and washed her hands, Franny Semmens got to work on her haiku. Her poem — a variation from the 5-7-5 count — and the rest of her classmates’ went on the chalkboard just inside the entrance to the restaurant.

“I try to put in as much sensory detail as I can,” said the 9-year-old.

“Moulding the pasta, smells like flour and pasta and good dough,” read her poem.

Students work with local writers to explore love, life and loss through poetry