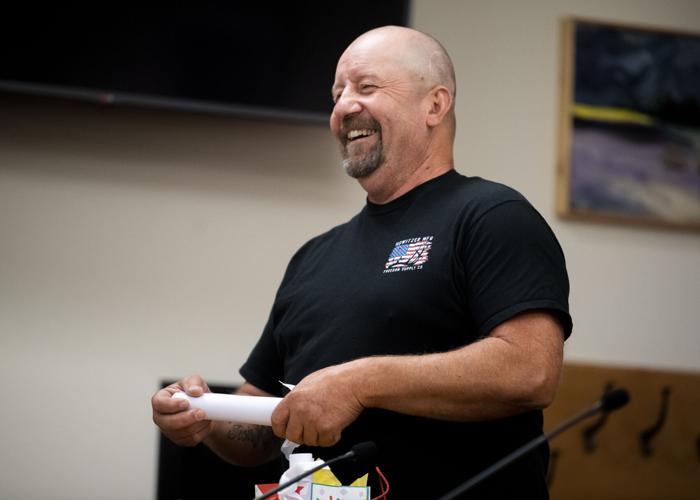 Cliff Fontaine graduated from ROAD court on Thursday morning. Fontaine was charged with his third DUI after crashing into a parked vehicle on the onramp to I-90 and was allowed to participate in ROAD, or Responsibility, Opportunities and Accountability for Drivers, a program for repeat DUI offenders designed as an alternative to adjudication. 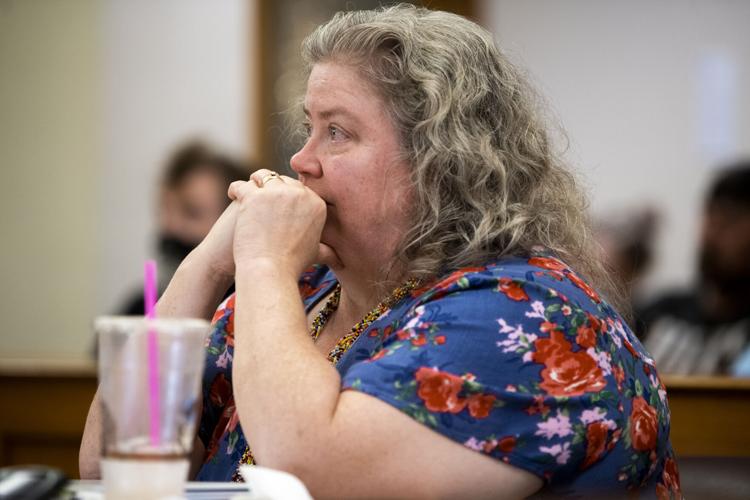 Carrie Garber, who was the prosecuting attorney on Cliff Fontaine's DUI case, sheds a tear as he graduates from the program on Thursday morning.

A Missoula County courtroom was packed on Thursday morning as Missoulians facing DUI charges celebrated progress in their sobriety and recovery journeys.

In the crowd was Cliff Fontaine, graduating from the Missoula County Justice Court’s Responsibility, Opportunities, Accountability for Drivers (ROAD) Court two years after he almost lost his life in a DUI crash. ROAD Court is Justice Court’s alternative to incarceration for misdemeanor DUI cases. Justice of the Peace Landee Holloway started the program in 2019.

Fontaine’s journey through ROAD Court started after he almost lost his life in a DUI wreck two years ago. Fontaine was driving home impaired, and crashed his car into a parked vehicle along an I-90 onramp near Clinton.

“The next thing I know, I was in the hospital,” Fontaine said, adding that he broke several bones. He was accepted into the ROAD program in September 2021.

A year later, on Thursday, he completed the program with a big smile on his face.

“It’s what I needed — I needed that push,” Fontaine said. “I wouldn’t have done it if I didn’t come into this.”

Fontaine’s energy levels are up since he quit drinking. He’s taken up woodworking and makes lodgepole furniture he donates to the YWCA Missoula, Mountain Home Montana and the Humane Society of Western Montana.

He picks up trash along the interstate, cans pickles and spends more time with family, including his 16- and 19-year-old daughters. He’s taken up cribbage with friends and biking as well.

Fontaine has amassed 361 days sober and soon will be eligible to get his full driver's license reinstated.

Holloway’s story with Fontaine began in 1987 when she worked as a probation and parole officer with him.

“I always believed he could make the changes, and he finally has done that,” she said. “He has really embraced sobriety.”

Missoula Deputy County Attorney Carrie Garber teared up as she spoke about Fontaine’s journey through ROAD Court. She disclosed that as the prosecutor in his case, she was apprehensive at first about taking his case in ROAD Court.

“You proved me wrong,” she said. “It has turned around my perception of what I do.”

“I can tell you guys care,” he said while looking at the judge and attorneys.

Holloway explained it’s a multifaceted system with three main goals for its participants: to reduce jail time, get driver’s licenses reinstated and waive 70% of the fines defendants face. As participants move through the five-phase program, they get portions of their fines waived. The program is completely grant-funded.

ROAD Court is entirely voluntary. It's targeted at cases for people with high blood-alcohol content levels and/or repeat DUI offenders. The court also works with Missoula's Municipal Court, meaning it takes DUI cases that happen within city limits, too.

"It's proven that treatment courts work," Holloway said. "It's a holistic, wrap-around approach."

The driver, Bradley K. Burgess, 37, was arrested on-scene and is being held in the Flathead County Detention Center.

Missoula law enforcement officers faced what appeared to be armed suspect in a hotel room on West Broadway Wednesday evening, before learning it was a false alarm.

Sanders County man gets 80 years in prison for 2020 homicide

Aaron E. McLaughlin was convicted by a Sanders County jury in June of deliberate homicide.

James M. White is charged with two misdemeanor counts of assault. He pleaded guilty to the two counts on Tuesday and was subsequently sentenced.

Nathan B. Harbison, 35, entered Alford pleas in May to two felonies and one misdemeanor.

Fires continue to burn as hot and dry weather persists into early September.

Law enforcement responded to three fatal crashes that left three people dead and others with injuries.

A man faces four felony charges on allegations that he threw a flaming Molotov cocktail at Buffalo Wild Wings employees on Tuesday evening.

Cliff Fontaine graduated from ROAD court on Thursday morning. Fontaine was charged with his third DUI after crashing into a parked vehicle on the onramp to I-90 and was allowed to participate in ROAD, or Responsibility, Opportunities and Accountability for Drivers, a program for repeat DUI offenders designed as an alternative to adjudication.

Carrie Garber, who was the prosecuting attorney on Cliff Fontaine's DUI case, sheds a tear as he graduates from the program on Thursday morning.