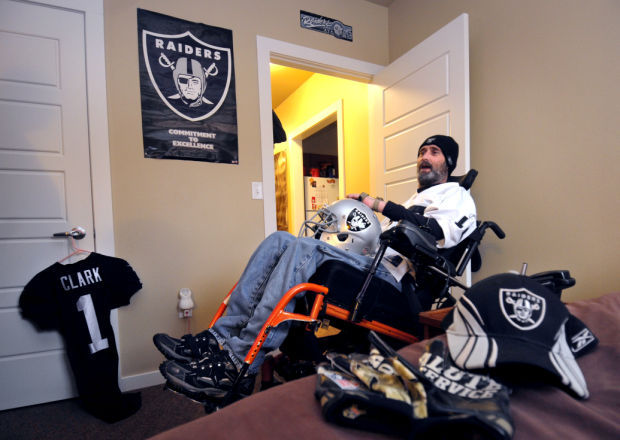 There are Oakland Raiders fans and then there is Shane Clark. An ardent fan since his mother gave him a Raiders jersey at age 3, Clark has dreamed of seeing a game in person. His wish was granted on Nov. 20 when he saw his team play live for the first time. 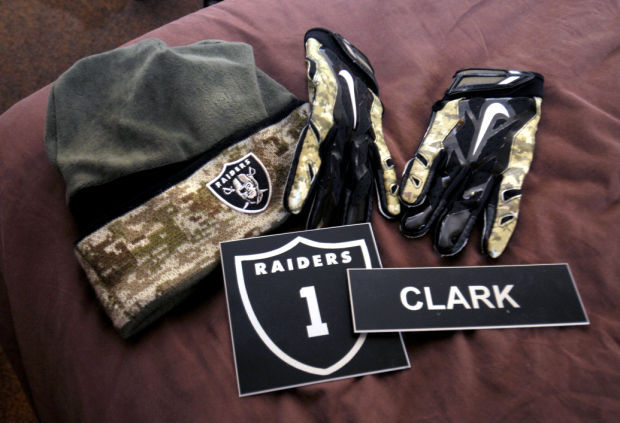 Along with the free tickets to the game, Clark got to tour the facility, meet Hall of Famer Willie Brown and collect a lot of authentic Raiders gear, including a regulation helmet. 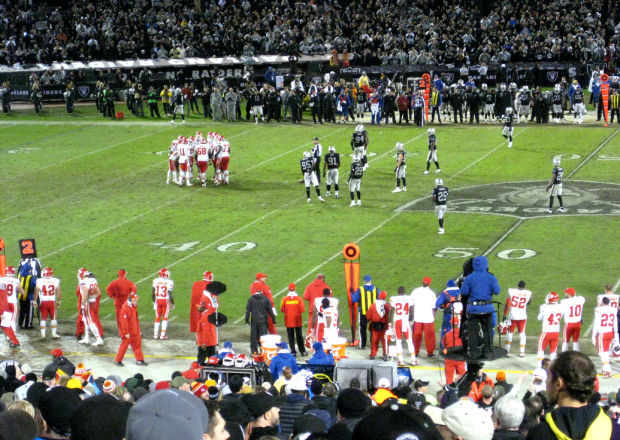 With seats near the 50-yard line, Clark hardly noticed the drenching rain that fell much of the game.

There are Oakland Raiders fans and then there is Shane Clark. An ardent fan since his mother gave him a Raiders jersey at age 3, Clark has dreamed of seeing a game in person. His wish was granted on Nov. 20 when he saw his team play live for the first time.

Along with the free tickets to the game, Clark got to tour the facility, meet Hall of Famer Willie Brown and collect a lot of authentic Raiders gear, including a regulation helmet.

With seats near the 50-yard line, Clark hardly noticed the drenching rain that fell much of the game.

Shane Clark is an Oakland Raiders fan. This sounds severe, but you might be too after you hear his story.

“He had a poncho over his head, another over his wheelchair, and despite the conditions was grinning ear to ear,” Mark Shearer, the Raiders’ director of business development, shared in an email last week.

The Raiders were 0-10 and on a 16-game losing streak. The arch-rival Kansas City Chiefs were in the process of obliterating a two-touchdown Oakland lead. But to Clark there was something in the air besides the raw California downpour.

“I didn’t care about the rain. I really didn’t even notice,” he said.

A quadriplegic since he broke his neck in a Blackfoot River mishap at age 23, Clark has clung to a passion for the Raiders most of his life. His mother gave him a tiny Oakland uniform for his third birthday.

It’s the kind of ardor that can be neither drenched nor explained. His parents met when Shane’s father, Guy, was stationed at the nearby Naval Air Station in Alameda.

He’s long dreamed of seeing them play live. A few years ago Clark’s social work case manager, Cris Fleming Bloxom, contacted the Raiders’ front office to see if something could be arranged.

“We tend to get a lot of calls like that, but Cris’ was different,” said Shearer, who has overseen the Raiders’ $40 million ticket sales operation for the past 15 years. “She explained Shane’s situation and went through great care to illustrate just how big a Raiders fan he is.”

Shearer told her if Clark could get to Oakland he’d make sure he received two tickets to a game. Fleming Bloxom, of Community Medical Center’s Home and Community Based Services, shook the bushes for the money to get him there and put him up. Nothing dropped out. She continued to call Shearer to reconfirm that the offer stood.

“Then this year,” Shearer said, “things fell into place.”

When the schedule came out Clark saw the Raiders were going to host the Chiefs on the night of his birthday. In August, Fleming Bloxom submitted an item to the Missoulian’s We Care column.

“Are you a football fan?” it began.

A man in his 40s is a longtime quadriplegic and has struggled with chronic health issues for years, the blurb explained. “He has an opportunity to attend a Raiders game in November, but needs help with motel and airfare costs. This is his one wish, his hope and his dream.”

It struck gold. Fleming Bloxom was contacted by a woman who told her she’d visited a man in town on his 80th birthday. The man, who requested anonymity, had the We Care article from the paper. He asked the woman to call and check it out and wound up donating $1,000.

A couple of others pitched in to make sure Clark and a personal care attendant, Jared Hoffman, had spending money for the trip.

Clark was and is flabbergasted.

“I’m nobody special,” he said. “There are people who have it way worse off. Way worse off. You’ve just got to let Jesus into your heart. They say if you ask you shall receive, and I really prayed hard on this and it came together.”

It was a whirlwind trip – down on Wednesday, home on Friday.

The first highlight was a rare tour of the Raiders headquarters in Alameda on the morning of game day. Greg Ditmer, Oakland’s community relations director, arranged for a shuttle from the hotel.

“From the moment I met Shane, he told me with conviction that we were going to win tonight, especially since it was his birthday,” Ditmer wrote. “In fact he told most Raiders players, employees and football staff that he met that day that we were going to get our first win that night; he would even show off the Raiders tattoo on his arm if anyone inquired.”

At first even Ditmer was skeptical of Clark’s confidence. After all, Kansas City was on a five-game winning streak.

“But by the end of his visit and hearing his conviction, I was ALL IN just like Shane,” he said.

And what a visit.

The boys in the equipment room put together what Clark called “bags of schwag” for him. They included an official game helmet; an extra-long black jersey, No. 1, with "CLARK" emblazoned on the back; gloves; a towel; a locker plate with his name on it; and more.

Next came a tour through the facility, where he met Hall of Fame cornerback Willie Brown. In January 1977, Brown picked off a Fran Tarkenton pass and returned it a record 75 yards in Super Bowl XI as the Raiders beat the Minnesota Vikings. Clark was carrying a pennant from the game. Brown happily signed it.

“I’ve never been at a loss for words, but when I met Willie Brown I called him Mr. Brown. I said, ‘I usually don’t get starstruck, but it’s hard around you.’

The players and coaches were in game-day meetings and film review when Clark’s tour ended.

“It was perfect timing,” he said. “I was sitting talking to the guys in the equipment room and the meetings got out, so a bunch of players started coming out.”

He said hey to star rookie linebacker Khalil Mack, to veteran defensive end Justin Tuck, to punter Marquette King, and to wide receiver Brice Butler, who wears No. 12 – the same number Clark was wearing on his own white jersey.

“Our starting quarterback, Derek Carr, came right up to me, shook my hand and we talked a bit,” Clark said. “He told me, ‘God bless,’ and I said, ‘We’re going to win tonight.’ ”

The game started in a drizzle that turned to a downpour by halftime. Clark and Hoffman had bought ponchos, and Clark had to cover his lap with the bags they came in and the joystick on his chair with another plastic bag. They spent intermission drying off, but life was good: The Raiders led 14-3.

They extended that to 17-3 in the third quarter, but the Chiefs rallied to take a 20-17 lead with nine minutes to go.

“I thought to myself what we really need is a good eight-minute drive with a touchdown,” Clark recalled.

Seventeen plays and 7 1/2 minutes later, his wish came mostly true. Carr hit James Jones for a 9-yard scoring pass to regain the lead with 1:46 remaining. Clark and the rest of the stadium watched tensely as the Chiefs drove into Raiders territory. On fourth-and-13, a long pass by Alex Smith fell incomplete.

The Raiders had snapped their losing streak with a 24-20 victory, just as Clark had promised them they would.

Clark doesn’t feel sorry for himself any more. He could have died when he jumped into the Blackfoot at Johnsrud Park in May 1993 and landed on his head on a gravel bar.

“I was being a dumb ass. Just stupid over a girl,” he said.

Surgeons successfully repaired two burst vertebrae and a third split one. He’s been paralyzed since, but Clark can move his arms and count his blessings.

“I’m glad I broke my neck rather than (suffered) a brain injury, that’s for sure,” he said. “I thank the Lord for that one. At least I can explain my needs.”

Clark has developed and received a network of support from clinicians, friends and family (most of whom are big Chiefs devotees in Missouri.) He’s Fleming Boxom’s biggest fan. The generosity of the We Care donor and others leave him grasping for words of appreciation.

Upon his return, Fleming Boxom put together a Montana thank-you package for the Raiders that was donated by Rockin Rudy’s. In it was buffalo jerky, huckleberry chocolates and popcorn. Ditmer, Shearer and the Raiders’ gang loved it.

“I’m just so humbled by this,” Clark said. “I still don’t believe that I was down there. Was that a dream or was it truly real?”

The Raiders have lost badly on the road twice since that night, including at Kansas City two weeks ago. But they’ve won two games at home, stunning the neighboring 49ers from San Francisco and, on Sunday, the Buffalo Bills. After the latter game, Raiders lineman Menelik Watson donated his game check – some $18,000 – to a 4-year-old girl with a rare heart disease who’d been treated to a visit much as Clark had been a month earlier.

Oakland plays its final game Sunday in Denver against the AFC West champion Broncos. They’ve got a long road ahead to regain respectability, but maybe, just maybe, the Raiders started something big on that rainy Sunday in November. Whatever happens, they know that a guy from Missoula, Montana, has their backs.

“I never have to have another birthday present, another Christmas present, another St. Patrick’s Day drink – whatever,” Clark said. “I don’t need anything any more. My dream came true. It was amazing.”

Hamilton church spreads $30K worth of gifts, food throughout community

On the Twelfth Night of the Christian calendar, the Magi arrived to deliver their gifts to the baby Jesus. In Missoula, Jan. 5 is the day the …

Carrying on: Holland a Titan on and off the field

It came down to a split-second decision on Devil’s Dip outside of Helmville: Lay down his street bike or stay upright and hit the ditch.