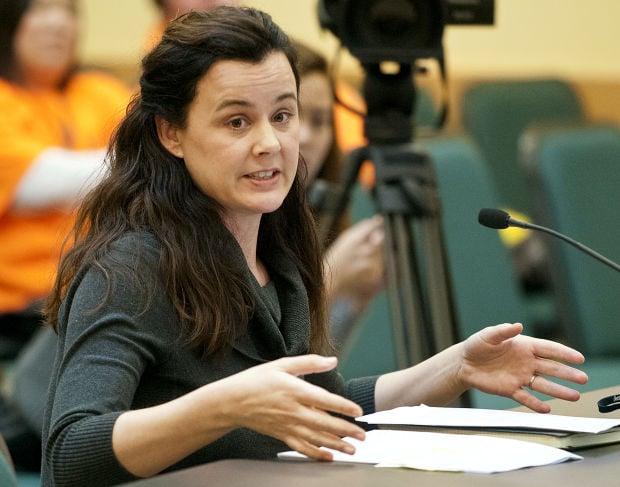 Anna Conley, a staff attorney with the American Civil Liberties Union of Montana, talks at a Missoula City Council committee meeting on Wednesday about reconsidering the city’s recently amended ordinances on aggressive solicitation and pedestrian interference. The threat of a civil rights lawsuit has made the City Council move to reconsider the ordinance. 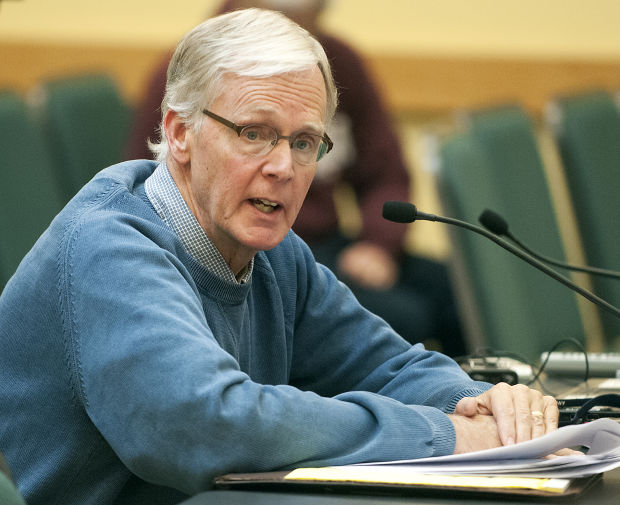 Missoula lawyer Dan Cederberg urged the council to remember that downtown public safety was the original focus of the ordinance, and not to let a recent court order regarding a similar ordinance in Boise, Idaho, sway them to backtrack.

The threat of a civil rights lawsuit has Mayor John Engen pushing the Missoula City Council to reconsider its aggressive solicitation and pedestrian interference ordinances, which were intended to crack down on downtown panhandlers.

“The fact of the matter is the ACLU has made it crystal clear to me that there is a level of confidence in their case to litigate the ordinance as amended,” Engen said Wednesday. “And whenever possible, I like to avoid litigation, and we may be in a position to do just that.”

Engen made his comments at the Administration and Finance Committee meeting, and Councilman Adam Hertz said he plans to ask for reconsideration at Monday’s council meeting.

Last week, in response to a lawsuit by the American Civil Liberties Union of Idaho, the U.S. District Court of Idaho issued a court order halting the city of Boise from enforcing a similar ordinance there until further court action.

“I’m concerned that the issues that existed in their ordinance that were found to be unconstitutional likely exist in Missoula’s amendments – and potentially the original (2009) amendments as well,” said Hertz, committee chairman.

In the District Court ruling, the judge found that Boise’s prohibition on peaceful solicitation in public places was too broad and violated free speech.

In a split vote in December, the council amended chapters of its Public Peace, Morals and Welfare code to prohibit sitting, sleeping or lying in certain places, and to decrease the places where people can legally solicit or panhandle. In 2009, the council made it illegal to ask for money in certain areas – such as within 20 feet of an ATM – and made it unlawful to “aggressively” solicit.

In the debate, Councilman Ed Childers said he has noticed one group of people that’s been missing, and that’s people who are homeless. Opponents of the ban on sitting and lying have said the prohibition criminalizes homelessness because people without homes need places to rest.

“We usually leave those people out,” Childers said. “I don’t know how to include them, but if you would bring some in, I’d listen to them.”

Social service agencies haven’t been a vocal part of the debate, and Jim Morton of the Human Resource Council and Eran Fowler Pehan of the Poverello Center said it’s because they’re working on the other side of the problem. Pehan said the Pov, a homeless shelter and soup kitchen, is trying to help people who currently are in the midst of homelessness.

“How are we getting people into housing?” she said. “That really has to be where the focus is.”

In public comment, downtown supporters Dan Cederberg and Matt Ellis said safety was the focus originally, and they asked the council to keep that ultimate goal at the fore.

Cederberg, a lawyer, said the court case in Boise is persuasive, but procedurally, it is a preliminary injunction that doesn’t set a precedent. He understands the expense and uncertainty of litigation, but he wouldn’t retreat, especially given the original reason for working on the regulations to improve downtown.

“They (members of the public) testified that they felt unsafe by what was going on,” Cederberg said.

Councilwoman Caitlin Copple, who is out of town and listened to the meeting via live videofeed, sponsored the amendments. In the local government listserv, she said she believes the council is right to take action to keep downtown safe and “prevent compassion fatigue from our business community,” a scenario she believes will hurt the city’s plan to end homelessness.

However, Copple also said she supports reconsideration and appreciates that the mayor and the ACLU are working on a compromise: “I don’t want us to waste money on a lawsuit that could be better spent on establishing wet housing or increased patrols downtown.”

A motion to reconsider an ordinance isn’t debatable, so Chairman Hertz said he wanted to hold a discussion in advance of Monday’s meeting. Mayor Engen requested the council then send the ordinance back to committee, which will allow more time to vet the language he and the ACLU of Montana present as a compromise.

Anna Conley, staff attorney with the ACLU of Montana, said she sees civil rights problems that predate the recent amendments. She and Engen have been in discussion about distances, blanket bans and general ordinance language to reach a compromise that keeps both parties out of court.

“I’ll be reaching out to a number of other constituencies to make sure we have broad support in the community as well as on council,” Engen said.

You’ll be able to sit on a stool in downtown Missoula – legally.

Ellen Buchanan has no way of knowing if an unruly person hanging out downtown has a home or doesn’t.

It remains legal to sit in most of downtown Missoula – most of the time.

The Missoula League of Women Voters is sponsoring a series of three free public forums focused on homelessness in Missoula.

Missoula Municipal Court Judge Kathleen Jenks arrived at the committee meeting last week with a stack of criminal files under her arm. She did…

The Missoula City Council may reconsider an ordinance intended to curb panhandling, given last week’s U.S. District Court decision in a lawsui…

Downtown will be a safer place for shoppers, workers and walkers – that’s one point of view on a new regulation.

They work a job for their income: 42 percent.

Anna Conley, a staff attorney with the American Civil Liberties Union of Montana, talks at a Missoula City Council committee meeting on Wednesday about reconsidering the city’s recently amended ordinances on aggressive solicitation and pedestrian interference. The threat of a civil rights lawsuit has made the City Council move to reconsider the ordinance.

Missoula lawyer Dan Cederberg urged the council to remember that downtown public safety was the original focus of the ordinance, and not to let a recent court order regarding a similar ordinance in Boise, Idaho, sway them to backtrack.