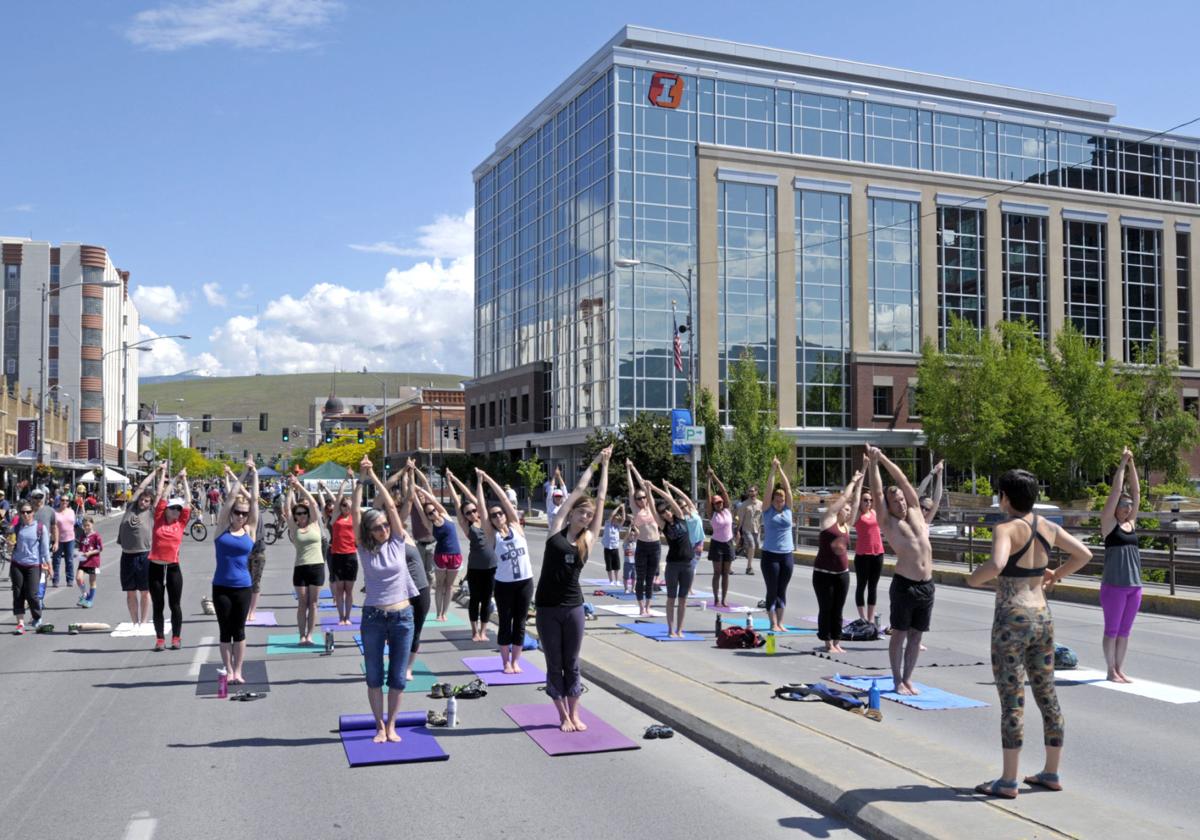 Jessica Peebles from Bikram Missoula leads a group yoga class on the Higgins Avenue bridge during the June 2014 Sunday Streets Missoula. The First Interstate Bank building in the background was paid for in part by Tax Increment Financing. 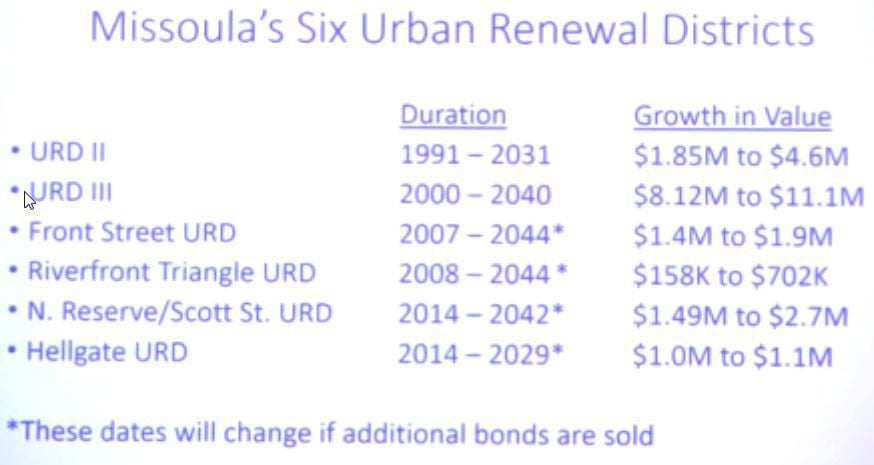 A list of the six Urban Renewal Districts in Missoula and how much they've grown in taxable value since they were formed.

According to Ellen Buchanan, director of the Missoula Redevelopment Agency, the area is thriving with businesses, tourism and new investments because of the foresight of city leaders to implement the first TIF program in the area back in 1978.

Buchanan was speaking to the Citizens Academy, a program organized by Missoula city council members Gwen Jones and Heather Harp. Ordinary people participate in informative question-and-answer sessions about different functions of city government. And this program filled up with a long waiting list.

Buchanan and MRA board member Ruth Reineking extolled the benefits of Urban Renewal District 1, which encompassed downtown and was formed in 1978 as the first of its kind in Montana.

Under state law, a city can form a URD if it meets certain conditions of blight, such as declining property tax revenue and deteriorating buildings. When the district is created, the property tax it is generating on the day it is created still goes into the city’s general fund. However, additional property taxes generated by any new investment in the district has to be spent inside it.

Private developers can apply to receive TIF funds for projects that the MRA board deems beneficial to the public. The general idea is to use the TIF funds as an incentive to encourage redevelopment that will increase the property tax base over the long term.

If the developers can convince the MRA board of the value of the project, they can get TIF funding that doesn't have to be paid back. Usually, the board wants developers to commit at least 10 times the amount in private capital as they get in TIF funding. The debt the MRA incurs by giving developers the TIF money is paid back by the increase in property taxes that projects in the URD generate.

When the district sunsets after 15 to 40 years, the goal is to have a much higher tax base go into the general fund than otherwise would be there. The downtown district sunset in 2005.

“I guess the leap of faith that people who question TIF have to make is whether or not that investment would have happened without the incentive of having the tax increment to assist, to make the project better or put the infrastructure in or whatever it’s used for,” Buchanan said. “And I would argue all day long that most of those projects won’t happen in those districts without the investment of the public funds.”

Buchanan said the redevelopment of downtown happened because of TIF and now the city's general fund benefits greatly.

“So for instance when the downtown district, which was the first tax increment district, sunsetted in 2005, the city realized almost $500,000 in new tax revenues, the schools (received) over $700,000, the county (received) close to $500,000 and the other smaller jurisdictions all had a windfall that came in,” Buchanan said. “The tax base grows that much as a result of the investments that were made.”

Buchanan said in the 1970s, downtown Missoula was crime-ridden with crumbling buildings and businesses fleeing to Brooks Street and the mall.

“Downtown was pretty desolate,” she said. “The river was a mess, the riverfront was a mess in that district.”

She pointed to statistics from the Missoula Police Department that showed nearly 20 percent of all major crimes in the city were committed in the downtown area in 1977. With the creation of the URD, the MRA was able to leverage $20 million in Tax Increment Financing, which was diverted away from the city’s general fund, and leverage that into $200 million worth of private, state and federal investment.

“If you fast forward to 2005, downtown’s thriving,” she said. “Healthy retail, entertainment, housing, a lot of pedestrian bicycle traffic. A lot of reinvestment of private dollars. Downtown is the poster child for urban redevelopment in the state, maybe in the country.”

Reineking said Nick Checota, who owns the Wilma Theatre and the Top Hat Lounge, probably wouldn't have invested millions to renovate those two venues had it not been for downtown revitalization.

At a recent MRA meeting, council member John DiBari said the TIF funding is the “reason Missoula has a downtown," and Buchanan agreed.

“This downtown would not exist if the leadership in this city had not had the vision they had back in 1978 to take advantage of this tool and create the Missoula Redevelopment Agency and create the first Urban Renewal District,” she said.

In the past, Missoula Downtown Partnership Executive Director Linda McCarthy has said the URD played a crucial role in revitalizing the area. She said the area tells a “comprehensive story of what a TIF district can do.”

“Look at how many businesses and how many jobs were created and how much money got invested,” she said. “It increased the tax base by $3 million. In addition, we got Caras Park, we got the carousel, we got buildings with new facades, buildings that all of the sudden are now in compliance with fire regulations. We got new sidewalks. We got the Central Park parking garage and street trees. So look at what you get in addition to that $3 million of additional tax revenue.”

Critics of TIF districts, such as former Missoula city council member Adam Hertz, have said in the past that TIF districts deprive school districts of tax revenue, deprive the city’s general fund and allow for taxpayer money to go to “pet projects” without enough oversight. He was especially vocal about the $5 million bike/pedestrian bridge over South Reserve Street, which is being paid for by the additional property tax inside Urban Renewal District III. Much of that money comes from the South Crossing development, where Cabela’s and Kohl’s shopping stores are located.

The MRA board does not have to get city council approval before it votes on projects. But council member Heather Harp believes that means projects are financed on their merits rather than by city council members trying to appeal to their segment of voters.

“When we’re reading about the MRA in the paper, all of the sudden it seems very political,” she said. “But the reality is the complete opposite. It’s apolitical. There isn’t a single councilor that sits on that board.”

The MRA board members are appointed by the mayor and approved by the city council. If city revenue falls short because of lower-than-expected property tax assessments, the mayor can ask the MRA for a remittance. That happened last year, when the city pulled $2.7 million from MRA funds to go to the city's general fund, the county and local school districts.

“The board is able to act more quickly and efficiently because there are rules we go by, but the city council does not have to act on a lot of the things that come in front of the MRA board because they’re either defined in the statute as eligible activities or the city council has delegated certain activities to the board to act on,” Buchanan said.

To see the full presentation visit Missoula Community Access Television online at http://69.144.69.99/CablecastPublicSite/show/9955?channel=2 and fast-forward to the 51st minute.