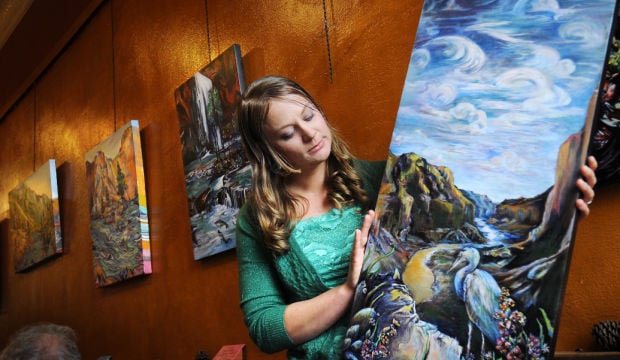 Ani Eastwood has guided tourists on the Colorado River through the Grand Canyon for over 10 years, so painting that magical river seemed like a logical pastime. Her show at Butterfly Herbs takes viewers down the Middle Fork of the Salmon River, in all its vibrant color. 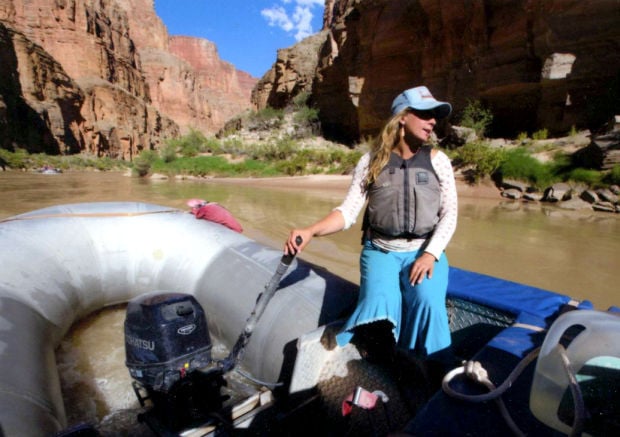 Eastwood at her summer job on the Colorado River through the Grand Canyon. 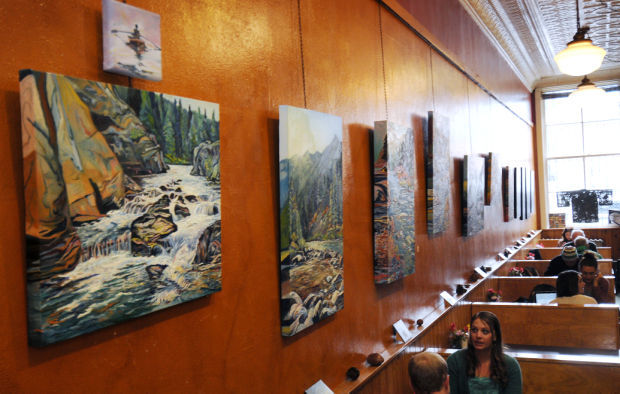 "I want the boaters to be able to look at it (a painting) and go, ' I know that rapid. That is a line in that rapid," says Eastwood.

So Ani Eastwood takes photographs with a waterproof Nikon along the Colorado River, and sometimes on the water.

She and her coworkers have 24-hour-a-day responsibilities – from making breakfast at 4 a.m., to leading hikes, to loading and unloading, which she describes as "moving a whole house off the boat every day."

And that's not including the stress of ensuring safe passage for the clients.

So it's the offseason, between October and sometime around April, when she gets to pursue her other career as an oil painter back home in Missoula, re-creating her favorite stretches on the water.

She's painted some of the "more formidable" rapids in the Grand Canyon – Crystal, Hance, Horn Creek, Upset Rapids and the Gorge. The canyon has its own rapids classification system, and she said many are the equivalent of a four or higher on the standard ratings.

Capturing the fluid motion of spraying water with a sticky medium like oil is as tricky as it sounds. She points out that in a single photograph, an adrenaline-inducing, dangerous stretch of river might appear fairly flat.

So she hikes around a rapid and snaps 20 or so photos. Once she's back home and is ready to paint, she thinks about the experience of the run and tries to capture the feel of the area.

"I want the boaters to be able to look at it and go, 'I know that rapid. That is a line in that rapid.' " she said.

Eastwood has been entrenched in that tight-knit boater community for over a decade.

She started guiding in 2003, underwent training, and by 2006, she'd earned her own boat as captain.

"It's kind of like college," she said: Once you put in your four or five years to get a boat, you stick with it.

She's married into the community as well, and met her husband Greg while boating.

He's a native of Arizona and his stepfather, Richard Quartaroli, spent his life on the river before retiring and becoming a renowned Grand Canyon historian.

"Our whole life is the river, pretty much," she said. "And everything about it."

The river community and its surrounding arts scene helped her launch her painting career, which she's now developing further in her home state.

Her latest series is based on trips nearby: the Middle Fork of the Salmon River in Idaho. The paintings now hanging in Butterfly Herbs in downtown Missoula showcase landscapes from along the trip, each named after its location: Dagger Falls, Big Pine, Trail Flat Hot Springs, accompanied by a trail marker and a small map.

Her Bitterroot Valley heritage reaches deep. Her grandfather was Bruce Conner, and she'd like to start painting Trapper Peak and other local mountains and rivers to "bring it home a little more."

Eastwood was born and raised in Florence with artistic parents - her mother Lori Conner was a potter, and her father, David Stube, played music.

She attended high school and college in Missoula, where she took a few art classes. She's been drawing and making art for as long as she can remember, and began painting in her teens. By 18, she'd passed through phases of interest in graphic design and abstract art, and had found her place in oil landscapes.

She has a travel bug - her father was born in Indonesia and took her on a trip there when she was a teenager. As she traveled more as an adult, the paintings became a way to share her excursions with her family.

In her 20s, Eastwood returned to Indonesia and had a two-month internship with a Balinese artist, whose techniques she uses to this day, and spent six months traveling around Asia with her husband.

She's inspired by Montana artists like Monte Dolack and Grand Canyon masters like Bruce Aiken and Peter A. Nisbet.

She uses layers and layers of paint to get the finished texture and flowing lines, rich in heightened colors. Sometimes the canvases, which she builds herself, take up to four months.

That makes it hard to part with the originals – so much so that she's started producing giclee prints for that very reason.

She says she likes documenting the landscapes that linger with you. The Butterfly show includes impassable stretches on the Salmon and more subdued scenes like Havasu Falls, an iconic, paradisaical spot in the Grand Canyon, rendered in a dark, seductive palette.

Guiding down there, as arduous the work is, "haunts you a bit during the winter," she said. Eastwood finds herself thinking about it year-round.

During the depths of the low-sunlight off-season, it helps to "sit in front of a big colorful painting," she said.

Ani Eastwood's oil paintings are on display at Butterfly Herbs, 232 N. Higgins Ave., through Wednesday. To view more of her art, go to anieastwoodfineart.com.

Welcome to a new weekly Missoulian series, Monday's Montanan. On the front page of each Monday's newspaper, we'll profile one of your fellow western Montanans. Have an idea for a future profile? Email city editor Justin Grigg at justin.grigg@missoulian.com.

Passion for education may as well be hereditary in Nick Salmon’s family.

You’d be amazed at the places in this world where Kathi and "Woody" Wood pop up – and how much good they do here at home.

Melissa Bangs did an unusual thing after she'd recovered from postpartum depression and mania.

Students will perform original choreography next week in an unconventional setting, the open space in the PAR/TV Center.

Local actors to stage two-man production of 'Romeo and Juliet'

As Nick Pavelich tells it, in the deadpan cadence of a stand-up comedian, the conversation with Sam Williamson on the subject of staging a two…

MMAC 120: Landscape by a mentor to Monet

Over my mantelpiece I have a painting by a Montana artist, Davi Nelson.

Microbrews from across Montana and the greater region will flow freely on Friday at the fifth annual Winter BrewFest.

J.K. Simmons became the first University of Montana alum to win an Oscar for acting on Sunday night.

Missoula writer's comic to be adapted for television series

Tim Daniel, who turned a hobby into a second career as a comics writer, will soon see his creation adapted into a live-action television show.

Christmas decorations light up cities around the world

Christmas decorations light up cities around the world

Ani Eastwood has guided tourists on the Colorado River through the Grand Canyon for over 10 years, so painting that magical river seemed like a logical pastime. Her show at Butterfly Herbs takes viewers down the Middle Fork of the Salmon River, in all its vibrant color.

Eastwood at her summer job on the Colorado River through the Grand Canyon.

"I want the boaters to be able to look at it (a painting) and go, ' I know that rapid. That is a line in that rapid," says Eastwood.