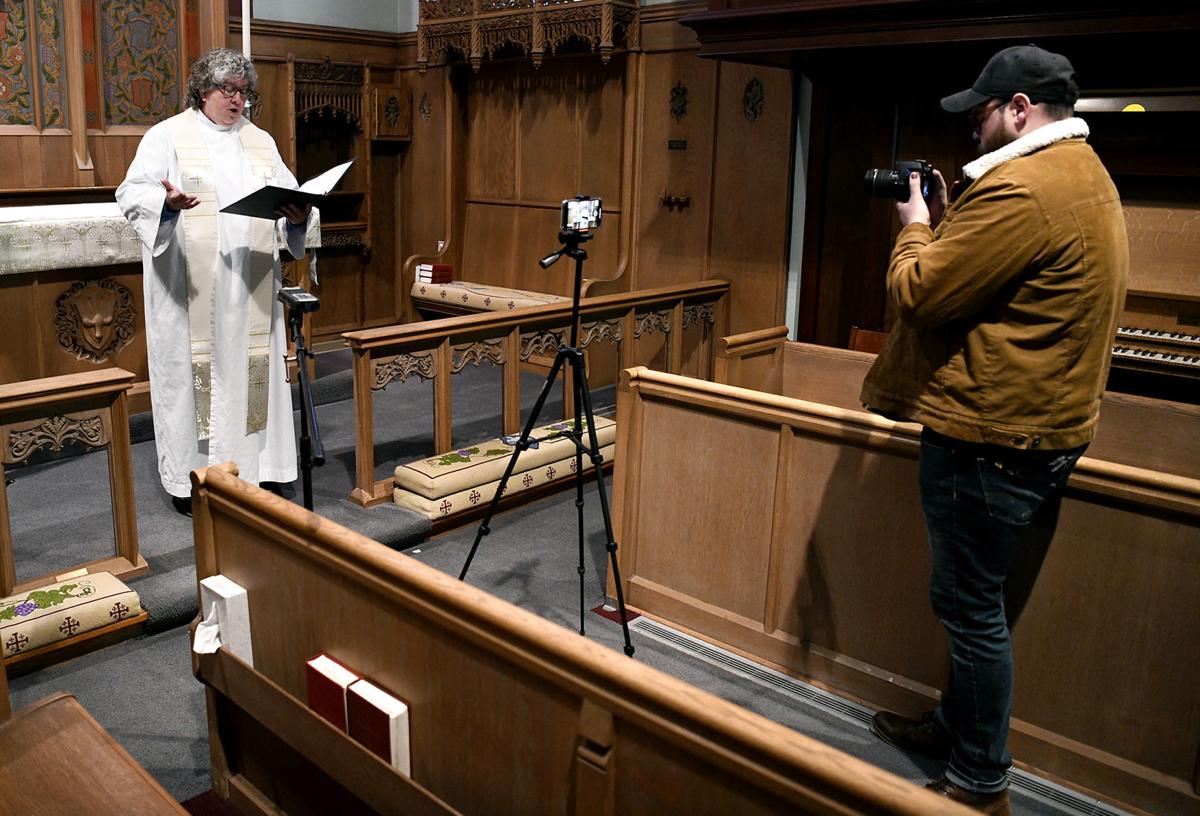 The Rev. Terri Ann Grotzinger records a service with help from parishioner and youth director PJ Willett last week at Holy Spirit Episcopal Church. Holy Spirit won't be having in-person services before the end of May, and Grotzinger said the church's remote services have connected the congregation in ways that might be continued. 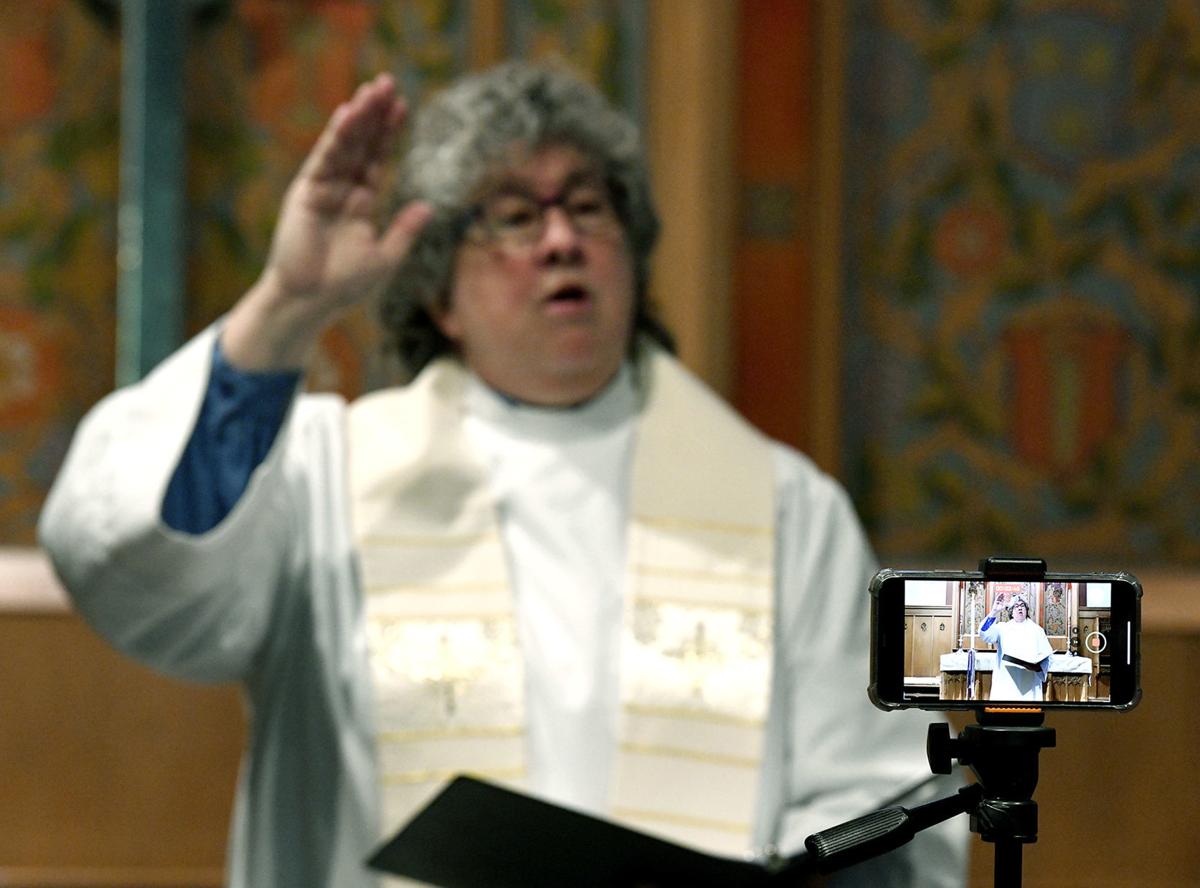 Parishioners of Missoula’s Holy Spirit Episcopal Church haven’t been able to gather at the Sixth Street church for the last two months, but that doesn’t mean they’ve missed out on sermons from Rev. Terri Ann Grotzinger, nor the sounds of organist Nancy Cooper’s music.

In fact, Grotzinger said she’s been excited to see even more people joining into prominent roles of weekly Sunday service and other various study sessions and music gatherings throughout the week broadcast on YouTube and Zoom.

“I’ve been happy to find people of all ages are willing to learn new things and engage, and we’ve been able to have new participation of parishioners who record something at home and send it in, and we can then blend it in to our recorded service,” she said. “It’s been wonderful in how it really allows people to know each other more, and really be a part of the service in ways they hadn’t in the past.”

While places of worship are often steeped in longstanding tradition, COVID-19 has forced them to adapt in ways some likely never imagined. Missoula’s congregations are now working to find ways to eventually reopen, though many have found bright spots in their newfound modes of worship that may be worth hanging onto.

This information is current as of May 20, 2020 and includes information from more than 70 communities served by Lee newspapers. Please check directly with the place of worship for any change in status or services prior to attending or tuning in.

Grotzinger said that while Holy Spirit definitely will not be hosting any in-person services before the end of May, she said church leaders are discussing ways services could be split into multiple small group sessions, or potentially well-distanced outdoor gatherings if the weather is right.

Part of the decision to hold off was simply not wanting to add any burden to churchgoers who were already stressed by kids being home instead of in school and other pressures added by the pandemic and the various measures taken to stop the spread, she said.

While she admits it has been hard to stay connected with parishioners who don't have home internet, she said she was pleased to see others stepping up to make phone calls and check in on folks who are stuck at home, especially older church members, as well as helping to bring them groceries and other necessities.

Even when gatherings do return, Grotzinger said she intends to broadcast the services live for anyone who isn't quite ready or willing to return to business as usual, and so far she hasn't found anyone calling for a hasty return.

"Honestly, I'm amazed," she said. "I thought they'd be itching to be back, but I think people see the value in caring for one another by staying home and enjoying getting to know the community in different ways. And I think it is bringing back some of the important things we've set aside along the way, like spending time playing an instrument or cooking at home with family, so I think it is helping reawaken some values, really out of necessity."

While hosting recorded sermons was new for Grotzinger and Holy Spirit, Har Shalom's Rabbi Laurie Franklin said she'd been using Zoom since about 2014, giving a little bit of a leg up during the transition to remote services.

Thanks to her experience attending rabbinical school virtually, Franklin knew her way around the various platforms for putting together and presenting teachings and gatherings via the internet.

Har Shalom is opting for a very gradual return to some in-person services eventually, but she said some members have been eager to return to normal.

"Some people have dealt with it really well, even people I wouldn't expect to have as much facility with using an online platform, though some have certainly been resistant and uncomfortable," she said. "The consensus of our board is to go in slow mode. Many of us have family members who are at-risk and there's no value in exposing them to the possibility of an asymptomatic carrier or bringing it home to our families. If we do gather under one roof, we need to be sure it is not going to be as a vector."

Franklin noted one specific problem with gathering — singing. She said studies have found that singing propels the droplets carrying the virus farther than the 6 feet of space recommended for typical social distancing. And not singing just isn't an option for Franklin who is relishes being able to play guitar and sing with people, even if only virtually.

Although things are looking good in Missoula, Franklin warned that complacency wouldn't allow it to stay that way. She said Har Shalom is already planning for the possibility that the major Jewish holidays in the fall might need to be observed remotely.

"I don't believe spirituality is nonessential," she said. "But gathering for it is."

Houses of worship during COVID-19

How are churches in your area and throughout the country Zooming, streaming and managing their way through COVID-19? Find out at this online interactive database via Missoulian.com.

“Until we have a vaccine, the new normal is any increase in activity is somewhat risky,” said Brandon Cooper, a UM faculty member.

The Rev. Terri Ann Grotzinger records a service with help from parishioner and youth director PJ Willett last week at Holy Spirit Episcopal Church. Holy Spirit won't be having in-person services before the end of May, and Grotzinger said the church's remote services have connected the congregation in ways that might be continued.