Become a Member
Read Today's E-edition
Share This
'Listen to them,' a friend yelled. But the Missoula man killed by police didn't
0 Comments
Share this
1 of 2 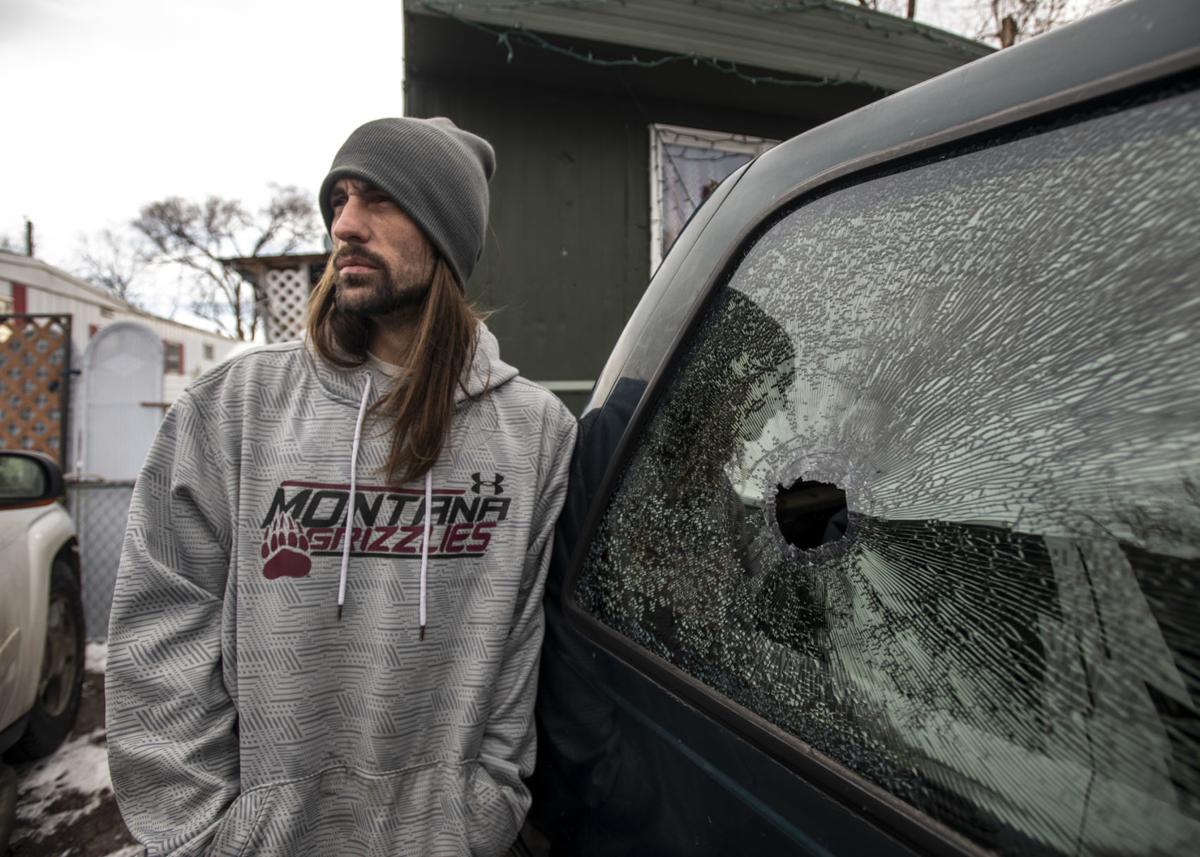 Eric Wilkins stands outside his trailer at the site of Wednesday's officer-involved shooting that claimed the life of Frank Cogar, Wilkins' friend of 15 years. "Frank is an awesome dude," Wilkins said. "One of the truly stand-up distant brothers I got." Cogar was accused of threatening officers who were responding to a report of a robbery in the trailer court on Missoula's Westside. 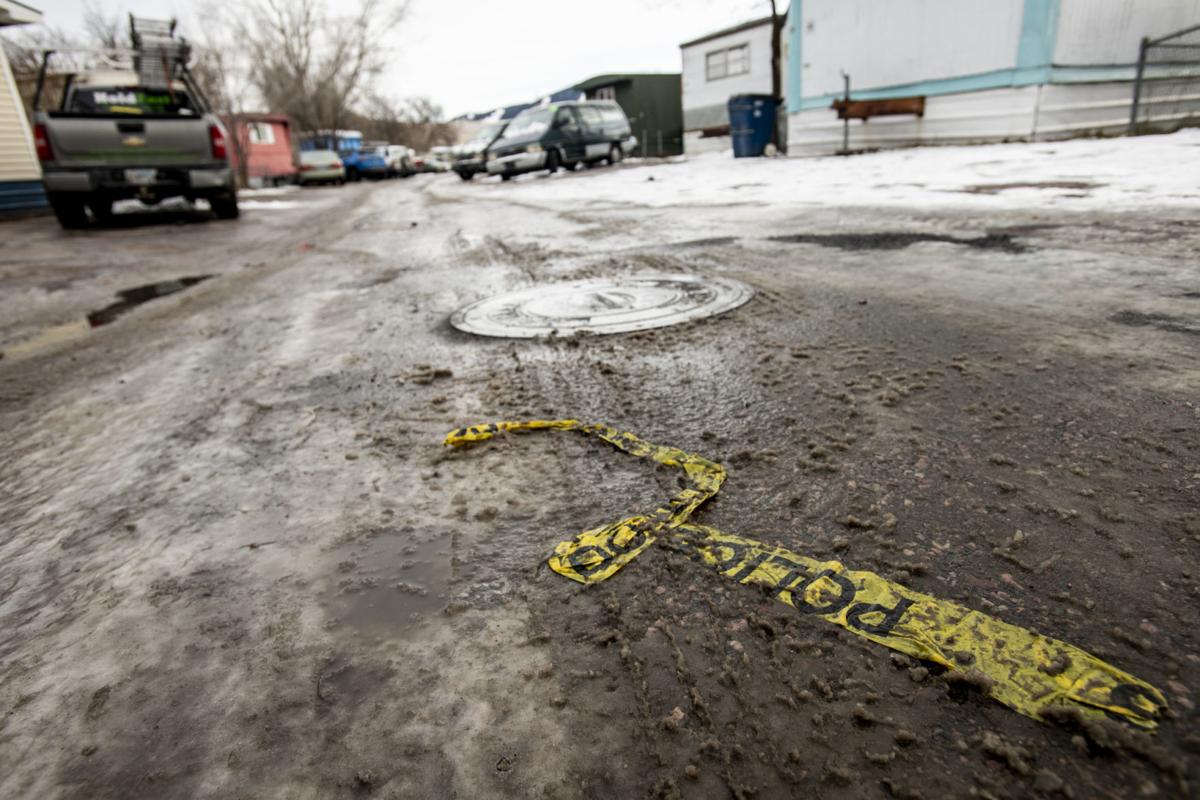 Remnants of the crime scene from Missoula's officer-involved shooting remain after a fire department crew hosed off the blood-soaked snow Wednesday evening.

A friend of the man shot Wednesday by Missoula police said he shouted to his friend to listen to authorities as they urged him to put down his gun during a confrontation in the Hollywood Trailer Court.

But Frank Cogar didn't listen, and the 35-year-old man ultimately lost his life when three officers opened fire in the trailer court off North Russell Street.

The incident stemmed from a reported robbery in the neighborhood that morning in which Cogar was the suspect, according to police. A day after the shooting, as the investigation carried on, the Missoula Police Department and a close friend of Cogar shared details of the moments before and after Cogar’s death, illustrating the tragedy for both Cogar and the officers involved.

Eric Wilkins said he'd come out of his trailer, a Bible in one hand and a medical marijuana joint in the other, when officers ordered him off his porch and away from the car where Cogar was sitting.

“Listen to them, Frank,” Wilkins remembered yelling to his friend inside the car.

Cogar and Wilkins had been friends for 15 years, becoming acquainted through the mother of Wilkins' first child. Wilkins described it as a slow burn of a friendship, seeing each other on occasion, then more frequently, until they were “as tight as they come.”

“Frank is an awesome dude,” Wilkins said Thursday outside his home in Hollywood Trailer Court. “One of the truly stand-up distant brothers I got.

“The last six months we were really tight. We didn’t call each other, just show up. Door’s always open, you know, what’s mine is yours.”

“He was the bully of the bullier,” Wilkins said. “He was a protector.”

On Wednesday, Wilkins described the incident that led officers to his driveway. He said the next-door neighbor had taken some fuses out of Cogar’s vehicle, trying to mess with the driver. But it was a misunderstanding; the neighbor had targeted the wrong car, or at least the wrong driver, Wilkins said.

“He didn’t know it was Frank driving it, it was mistaken information,” Wilkins said. “And because of that, he got a little awakening call.”

The neighbor, reached at his home on Thursday, declined to comment for this story. Police on Thursday said the neighbor and victim of the alleged robbery by Cogar called 9-1-1 to the area.

As Cogar and Wilkins returned to Wilkins’ trailer, Cogar was first to see the police arriving, Wilkins said.

“Frank came in and said ‘They’re posted up out front — the only way out is on foot and right now,’” Wilkins said. “I just had to finish taking care of my daughter, a 3-year-old inside, wanted to make sure she was taken care of, and safe.

“I rolled a medical marijuana joint — I’ve got my card — took a couple puffs, grabbed my Bible and walked out the door. He was in the car and I heard the cops yelling, ‘You in the vehicle, put your hands up,’

“I’m like, ‘Just listen to them, Frank.’ Then all of a sudden, ‘You on the porch, put your hands up.’ I had my Bible and my joint, and they gave me orders and I slowly followed them. They told me to walk out to the street. He told me to turn around and walk backwards.”

Interim police Chief Mike Colyer said on Thursday officers kept a safe distance from the vehicle as they negotiated with Cogar inside.

“That went on for 25 minutes while this uncooperative male with the handgun just refused to give up the weapon and refused to comply with any of their orders,” Colyer said. “Ultimately, 25 minutes into this exchange between them, the male presented such an immediate threat to the officers that they made a split-second, life-or-death decision to protect themselves. Three officers fired at the male, striking him with their department-authorized firearms, and the male fell to the ground.”

Cogar did not fire his weapon, Colyer said, but information gathered afterward indicated he was preparing to “harm” the officers. In a rapid change of approach, officers went from engaging with a person who they believed would kill them to trying to save the man’s life, Colyer said. Police supervisors had already made the decision to put Missoula Emergency Services Inc. and Missoula Fire Department crews on standby down the road, Colyer said. Cogar was transported to the hospital, where he was pronounced dead.

“It was, of course, a tragedy for the Cogar family,” Colyer said Thursday. “On behalf of the Missoula Police Department, we express our condolences to them. Under any circumstances like this, to lose a loved one unexpectedly is a tragedy, and our thoughts are with the family.”

The Montana Department of Justice’s Division of Criminal Investigation has taken over the probe into the officer-involved shooting, while Missoula Police continue to investigate the alleged robbery that preceded it. Police also opened an internal investigation into whether department policy properly played out during the incident.

Colyer declined to say Thursday whether authorities believed drugs or mental health played a role in the incident, as the investigation is ongoing. But Wilkins said Cogar was “fired up” after the incident with the neighbor. He also said Cogar had been prescribed “a mass amount of uppers and downers.” Beyond the involvement of prescriptions, Wilkins said Cogar was a felon, and it would have been illegal for him to be in possession of a firearm as he was. The Missoulian could not verify the felony on Thursday.

On Thursday, the driveway that runs through the trailer court still exhibited some signs of the encounter, even after investigators had combed the scene. Bullet holes had splintered the windows of the van outside Wilkins' home, where the events began Wednesday morning.

“He was just a man on a mission yesterday,” Wilkins said. “By all means, he questioned everybody. In reality, the closest people in my life have hurt me the most. Same thing with him.

“I loved him dearly. I wish this didn’t happen the way it did, but by all means I’m going to change a couple things in my life because of it. I’m just going to stand up for what I believe in, stay on the front lines.”

The Missoula Police Department is also reeling. Colyer said Missoula County Sheriff’s Office was called into the city as police officers rushed to the scene of the shooting. Then an off-duty shift was called into duty to take over for those who had rushed to the scene, ensuring “there wasn’t even a blink in service,” Colyer said. Another round of officers who were supposed to have Thursday off came into work to cover for those who were involved.

“We have police officers in our department coming in to volunteer on their days off because (of their) sense of service, and to give their co-workers and a lot of times, friends time to process this.”

The names of the three officers involved in the shooting have not been released, and the officers are on administrative leave indefinitely, Colyer said, adding at Thursday’s public briefing that the department wants to ensure the mental health of those involved.

“It’s stressful for them, and there’s a process to all of this,” he said. “It takes time, and our role is to recognize that we trust them and support their work and we want them to take care of themselves and their families and get them back to work as the good officers they were.”

Wednesday’s is the fourth officer-involved shooting in less than two years for Missoula police. The most recent incident, before Wednesday, occurred in September 2019, in which Steven Gill was shot and killed in a camper on North Second Street after threatening officers with a firearm, Colyer said. The coroner’s inquest into Gill’s killing, in which a public coroner will preside over a trial for jurors to decide whether the officers’ shooting was justified, is scheduled for April 13, Missoula Chief Criminal Deputy County Attorney Matt Jennings told the Missoulian on Thursday. It’s too soon, Jennings said, to determine when a coroner’s inquest will be scheduled to examine Wednesday’s shooting.

“We take them very seriously,” Colyer said. “Force avoidance is a big part of our training, de-confliction is a big part of our training. The evidence in this case of the exhausting efforts they took to de-conflict this situation and get it peacefully resolved are impressive. I can’t be more pleased and impressed with what they did out there, showing restraint and patience before it ultimately came to a boiling point.”

One man was taken to the hospital after an officer-involved shooting Wednesday morning, according to Missoula police.

The 18-year-old charged with evidence tampering, intimidation and drug distribution after a fatal stabbing on New Year's Day pleaded not guilty to the charges Wednesday.

Montanans were key soldiers in Civil Rights Act battle of 1964

Montana’s civil rights legacy reached a key juncture at the same time the nation’s did.

Schools in Polson, across Montana, celebrate MLK day with readings

Fourth generation, lifelong resident of Missoula County and current County Commissioner Juanita Vero has filed her intention to run as the Dem…

Eric Wilkins stands outside his trailer at the site of Wednesday's officer-involved shooting that claimed the life of Frank Cogar, Wilkins' friend of 15 years. "Frank is an awesome dude," Wilkins said. "One of the truly stand-up distant brothers I got." Cogar was accused of threatening officers who were responding to a report of a robbery in the trailer court on Missoula's Westside.

Remnants of the crime scene from Missoula's officer-involved shooting remain after a fire department crew hosed off the blood-soaked snow Wednesday evening.