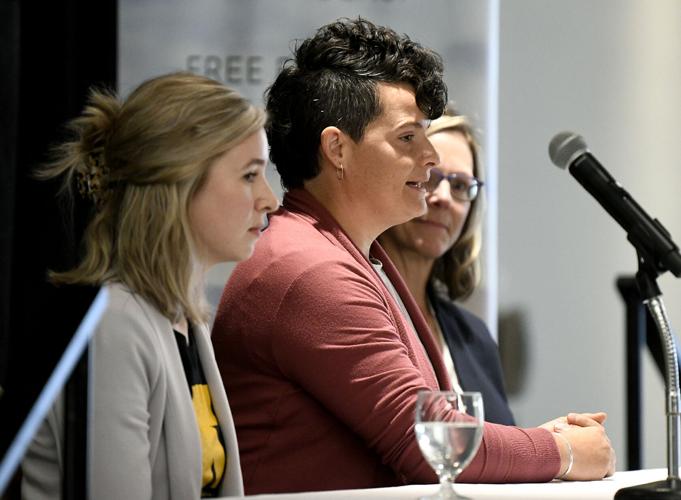 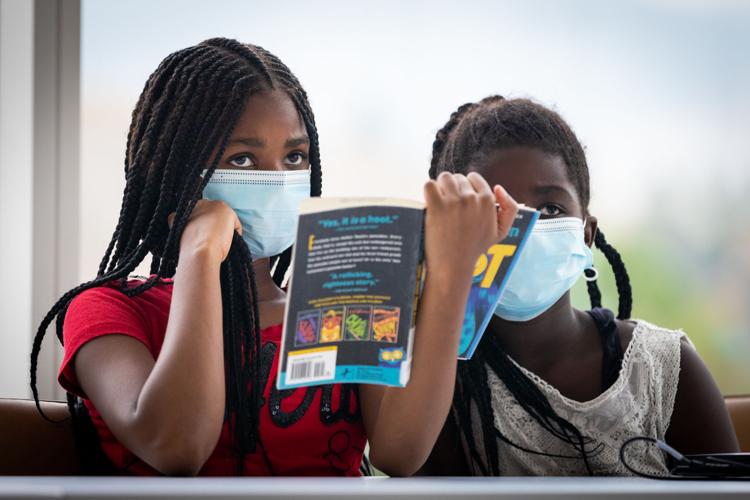 Soft Landing Missoula book club members Gaele, left, and Emminance, both from the Democratic Republic of Congo, glance over their book as they watch and listen to Natalia Boise help out other kids with their reading at the Missoula Public Library last year.

Fiscal Year 2022 was the busiest year for refugee resettlement since the International Rescue Committee opened a Missoula office in 2016. Over the past year, the IRC resettled 159 people within the Missoula community.

And fiscal 2023 is expected to exceed last year’s high point, with 250 refugees anticipated to arrive in Missoula, according to the organization’s development director, Sarah Howerton.

Service providers who work with the local refugee population expressed confidence their organizations are prepared for the influx of immigrants and refugees.

“We’ve definitely grown over the last six years,” said Mary Poole, executive director for the nonprofit Soft Landing. “Partnerships and partners and the community have grown and that’s how we meet that need through a community effort and the efforts of our partners as well.”

Poole’s organization welcomed its first family from the Democratic Republic of the Congo in the summer of 2016.

Poole shared a story at a City Club event Monday in which she remembered the mother of that family seemingly saying “Missoula” over and over again at the farmer’s market one Saturday. Poole was surprised to learn the woman was actually repeating “mzuri,” a Swahili word that means “good.”

Since 2016, Soft Landing has developed to include a resource center, youth programming and the United We Eat initiative.

The resource center is the hub of donations and a place for resources like driver’s education and citizenship classes.

Through United We Eat, refugee and immigrant chefs prepare take-home meals and host supper clubs, cookie sales and virtual cooking classes. Poole said United We Eat has raised tens of thousands of dollars that go directly to the 25 chefs in the program.

Soft Landing’s youth programs, which range from after-school tutoring to whitewater rafting during the summer, serve about 100 immigrant and refugee children.

Soft Landing also performs outreach through storytelling about the families and individuals the group serves and hosts social events throughout the year.

“That’s how our work has progressed over the last seven years,” Poole said.

Soft Landing works alongside IRC, one of nine official refugee resettlement agencies that operates across the country. The IRC runs 29 offices throughout the U.S., including one in Missoula.

IRC provides assistance to refugees as soon as they arrive in the country with a particular focus on helping with their first 90 days in the U.S. IRC helps with employment, health care, housing, enrollment in school and childcare, as well as immigration.

The committee provides longer-term assistance as well, with the ultimate goal of empowering refugees and immigrants to become self-sufficient in their new homes.

Since 2016, IRC has been resettling about 100 refugees every year — except during the COVID-19 pandemic — but Howerton said that number is on the rise.

International demand for refugee resettlement is growing, and the Biden administration recently increased the country’s cap on refugee intake.

According to Howerton, less than 1% of the world’s 27.1 million refugees get resettled in a third-party country like the United States.

Despite obstacles like increasing demand and language barriers, Poole and Howerton believe Missoula is well-poised to accommodate more immigrants and refugees.

They encouraged community members to donate their time and money to supporting Soft Landing and the IRC, even though they noted volunteer opportunities with their organizations consist of long-term commitments rather than one-time events.

Another way to help the refugee community, Poole said, is to rethink conceptions of successfully integrated refugees. Missoulians who have gone through both programs have become business owners and doctors, but they have also successfully become parents who have the privilege of watching their children get on the school bus safely.

“I’d just invite people to think about success in different ways,” she said.

While the emergency shelter has funding to last through this winter, its future remains unclear now that the crisis services levy failed to pa…

The students were killed in what is considered to be "an isolated, targeted attack and there is no imminent threat to the community at large,"…

The assessment received 617 responses, representing every city neighborhood and outlying area in the county.

Missoula Jewish groups gear up for Hanukkah amid rising antisemitism

The activities center around celebrating the triumph of light over darkness, a sentiment all the more pertinent given a recent rise in antisemitism.

Lately, Huckleberry the beaver’s specially built pool can only be filled halfway.

The reason China used a spy balloon to collect intelligence

Soft Landing Missoula book club members Gaele, left, and Emminance, both from the Democratic Republic of Congo, glance over their book as they watch and listen to Natalia Boise help out other kids with their reading at the Missoula Public Library last year.