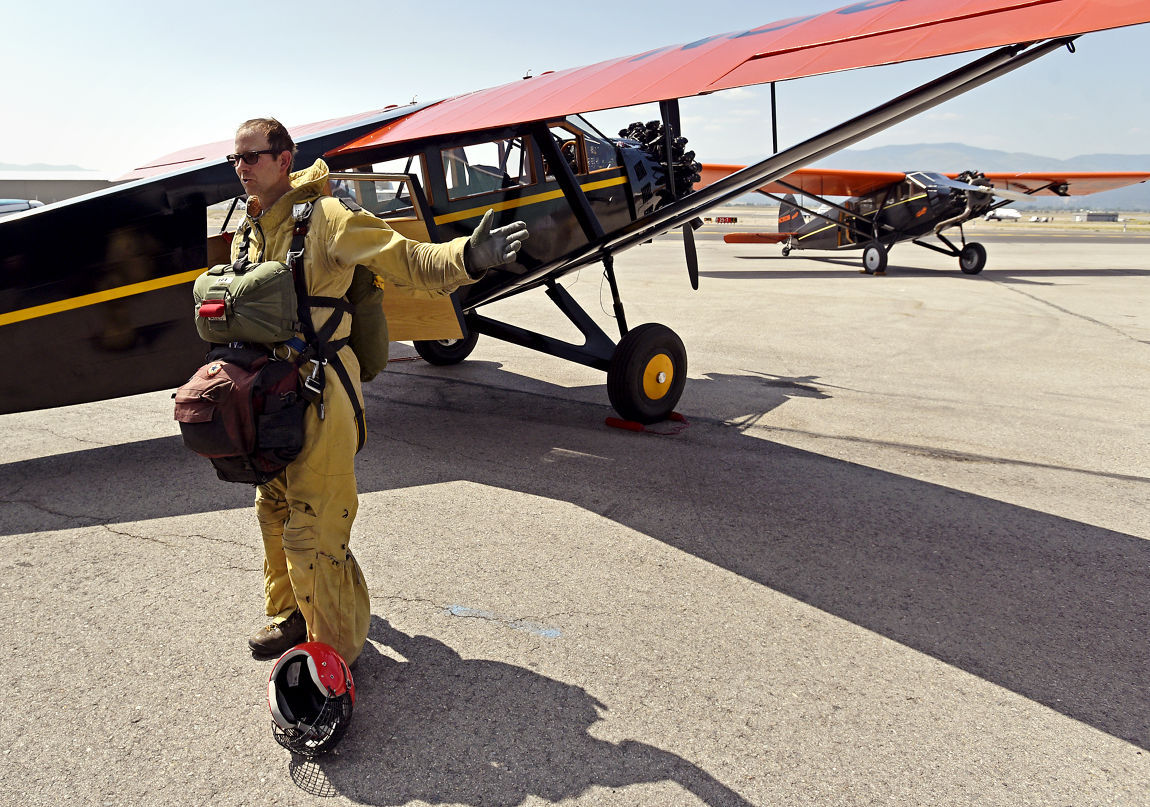 Scott Jones demonstrates his smokejumping gear next to a pair of Travel Air 6000 airplanes at the Museum of Mountain Flying on Thursday. This Sunday marks the 75th anniversary of the first “live” fire jump in U.S. Forest Service history, and the National Smokejumper Association Reunion next weekend will celebrate that anniversary. 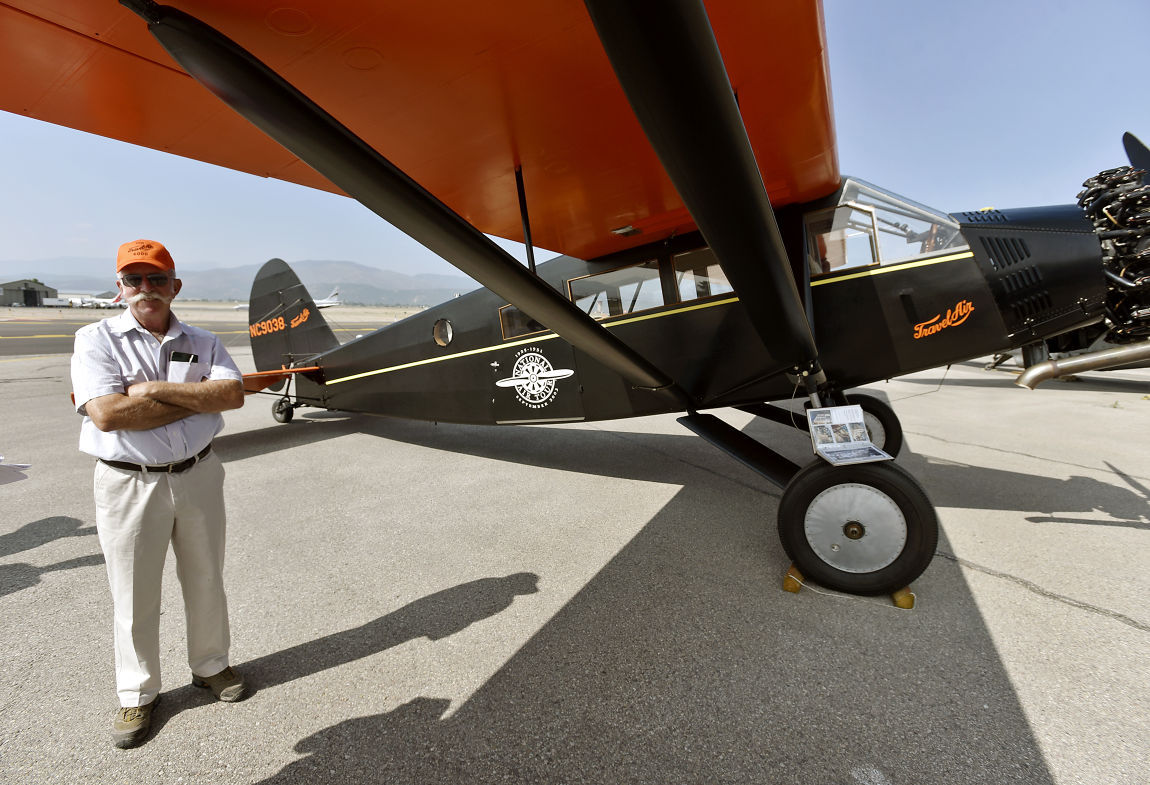 Hank Galpin of Kalispell flew his restored 1928 Travel Air 6000, which he spent 10 years working on, to the museum Thursday. Johnson Flying Service of Missoula used the planes extensively for dropping smokejumpers, hauling freight and flying emergency missions in the middle part of the 20th century.

Scott Jones demonstrates his smokejumping gear next to a pair of Travel Air 6000 airplanes at the Museum of Mountain Flying on Thursday. This Sunday marks the 75th anniversary of the first “live” fire jump in U.S. Forest Service history, and the National Smokejumper Association Reunion next weekend will celebrate that anniversary.

Hank Galpin of Kalispell flew his restored 1928 Travel Air 6000, which he spent 10 years working on, to the museum Thursday. Johnson Flying Service of Missoula used the planes extensively for dropping smokejumpers, hauling freight and flying emergency missions in the middle part of the 20th century.

On July 12, 1940 – 75 years ago Sunday – first Robinson, then Cooley jumped from a Travel Air 6000 and parachuted into the rugged mountains of Idaho to a fire on Marten Creek in the Nez Perce National Forest.

They put it out, then walked 28 miles to get out of the woods.

It was the initial “live” fire jump in U.S. Forest Service history. Three-quarters of a century later, the program is going full tilt, though its “mothership,” the Missoula Smokejumper Center, was all but deserted Thursday as an early fire season rages across the West.

“Those guys on the first jump in 1940, they were the ones who blazed the first trail to where we are now,” said Scott Jones, a 15-year smokejumping veteran from Missoula with some 200 jumps under his belt. “Proving the technology and creating the technology that makes the program successful today is based around those 75 years of development.”

It wasn’t until 1944 that Frank Derry, the man who trained those first jumpers for the Forest Service at Seeley Lake, patented a parachute design with slots on the outer edges of the canopy to make them steerable.

“They had these primitive jumpsuits and they didn’t have facemasks,” Jones said. “Everything I’ve got today is a result of experience over 75 years.”

He’d come over Thursday morning from the smokejumper center on one end of the Missoula International Airport to the Museum of Mountain Flying on the other, where they were getting a head start on next week’s National Smokejumper Association Reunion at the University of Montana.

That event, scheduled for Friday, July 17, through Sunday, July 19, celebrates the 75th anniversary of smokejumping and returns to Missoula for the first time since 2004.

Outside the museum hangar were parked two Travel Air 6000s – both manufactured in the late 1920s and both sky worthy, something Hank Galpin of Kalispell proved by taking a full load of five passengers for a spin in his No. 9038.

The wreckage was eventually purchased by a man in Homer, Alaska, who had it for 20 years before Galpin bought it in 1992. He spent the next 10 years restoring it.

The plane is one of five Johnson Travel Airs around. One that belongs to Dick and Eric Komberec is on display at the flying museum.

Another is owned by Howard Wright of Seattle and a fourth sits in the Delta Flight Museum in Atlanta.

The fifth belongs to Scott Glover of Mount Pleasant, Texas. It’s the actual plane that Robinson, of Kooskia, Idaho, and Cooley, then of Hamilton, took their historic first plunge from.

Komberec and the museum board had hoped Glover’s Travel Air No. 8112 would fly in for next week’s reunion, but it turned out he had a prior engagement.

Cooley remains a legend in smokejumper circles. His death in Missoula in 2009 at age 98 was marked by stories in the New York Times, Washington Post and the Wall Street Journal.

He became the superintendent of the U.S. Forest Service’s first squad of smokejumpers, based in Missoula; trained conscientious objectors to jump on fires during World War II; and founded the National Smokejumper Association that’s hosting next week’s reunion.

Cooley was also a player in one of smokejumping’s tragedies. In 1949, he was the spotter on the DC-3 over Mann Gulch that resulted in the deaths of 13 men.

Robinson was 81 when he died in 1987 in Lenore, Idaho. Three years earlier, the Forest Service presented him with a certificate of appreciation “in recognition of his making the first parachute jump to control a forest fire in the United States, on July 12, 1940, at Marten Creek within the Selway-Bitterroot Wilderness.”

Two other men were in the Travel Air that day, both with strong Missoula ties.

Dick Johnson flew the plane over to the Moose Creek Ranger Station on the Selway River to pick up the jumpers that hot Friday, when temperatures in Missoula reached 103. He operated Johnson Flying Service with his brother Bob until he was killed when his Travel Air crashed in a snowstorm near Jackson Hole, Wyoming, in 1945.

The spotter for the historic jump was Merle Lundrigan, who came very near not surviving the day. While pushing out supplies from the plane after the parachutist drops, Lundrigan was entangled in ropes and was pulled out the door. He clung to the doorstep until Johnson banked the plane, tossing Lundrigan back inside.

The following year, Lundrigan became chief foreman of parachute squads for the Forest Service’s fire control division and he spent the last 15 years of a 30-year career at the Northern Region headquarters in Missoula. Lundrigan retired as general supply officer at the Aerial Fire Depot in 1962. He died in 1992 at age 84.

It’s assumed the pioneers of smokejumping shared common traits, the most prominent one being they’d lost their marbles.

Jones’ rookie jump in 2001 was his worst. He was snagged in a tree on a fire up Rock Creek in Granite County and broke his wrist in the fall.

“Knock on my head, since then I’ve had some hard landings but I’ve been very, very focused. You get focused.”

Cooley once remarked that he didn’t understand it, but he was never nervous when jumping.

Seventy-five years after the pioneering jump, Jones said he can’t claim that distinction.

“You’re nervous because you’re doing something that’s contrary to your own physical well-being,” he said. “But in this world there’s always development, there’s always streamlining, and a lot of times it’s for safety.

“Whether it be our aircraft or our parachutes or our jump clothing or whatever we’re doing, it never stops. And that started with Earl Cooley and Rufus Robinson."

If you ask Dave Stack, the old wedding dress stitched from a silk parachute may be the oddes…

To honor and celebrate the heritage of renowned author Norman Maclean, Alpine Artisans, a 23…

First flight of the final year: Smokejumpers' last DC-3 gets ready to work

Just shy of her 70th birthday, Jump-15 can still spool up faster than the smokejumpers she carries.

Take the occasion of the National Smokejumper Association Reunion from Friday, July 17, through Sunday, July 19, to check out the guided tours, videos and exhibits offered at the Missoula Smokejumper Visitor Center, 5765 W. Broadway, to the west of Missoula International Airport. You can also hang out with smokejumpers from near and far at the Museum of Mountain Flying, 5225 W. Broadway, on the east end of the Missoula International Airport.

Only one major fire kept western Montana firefighters busy Saturday, although they are keeping a lookout for other potential blazes.

The first fire jump in the United States, made by Missoula smokejumpers Rufus Robinson and Earl Cooley 75 years ago today, is recorded in the …

The 54-year-old cyclist who was seriously injured Wednesday morning when her bicycle collided with a car on Orange Street is in stable condition.

Smokejumpers: Thanks for hosting special reunion

This weekend there are about 800 former smokejumpers, spouses and some family members in Missoula commemorating 75 years of smokejumping. Miss…

Lee Gossett has come bearing gifts to the National Smokejumper Reunion in Missoula this weekend.

BILLINGS - A group of smoke jumpers swept into Custer County on Monday. There wasn't smoke or a fire for the parachuting unit to attack; the j…

Downed pilot was doing what he loved

Mark Melotz was a trucker with a passion for flying.