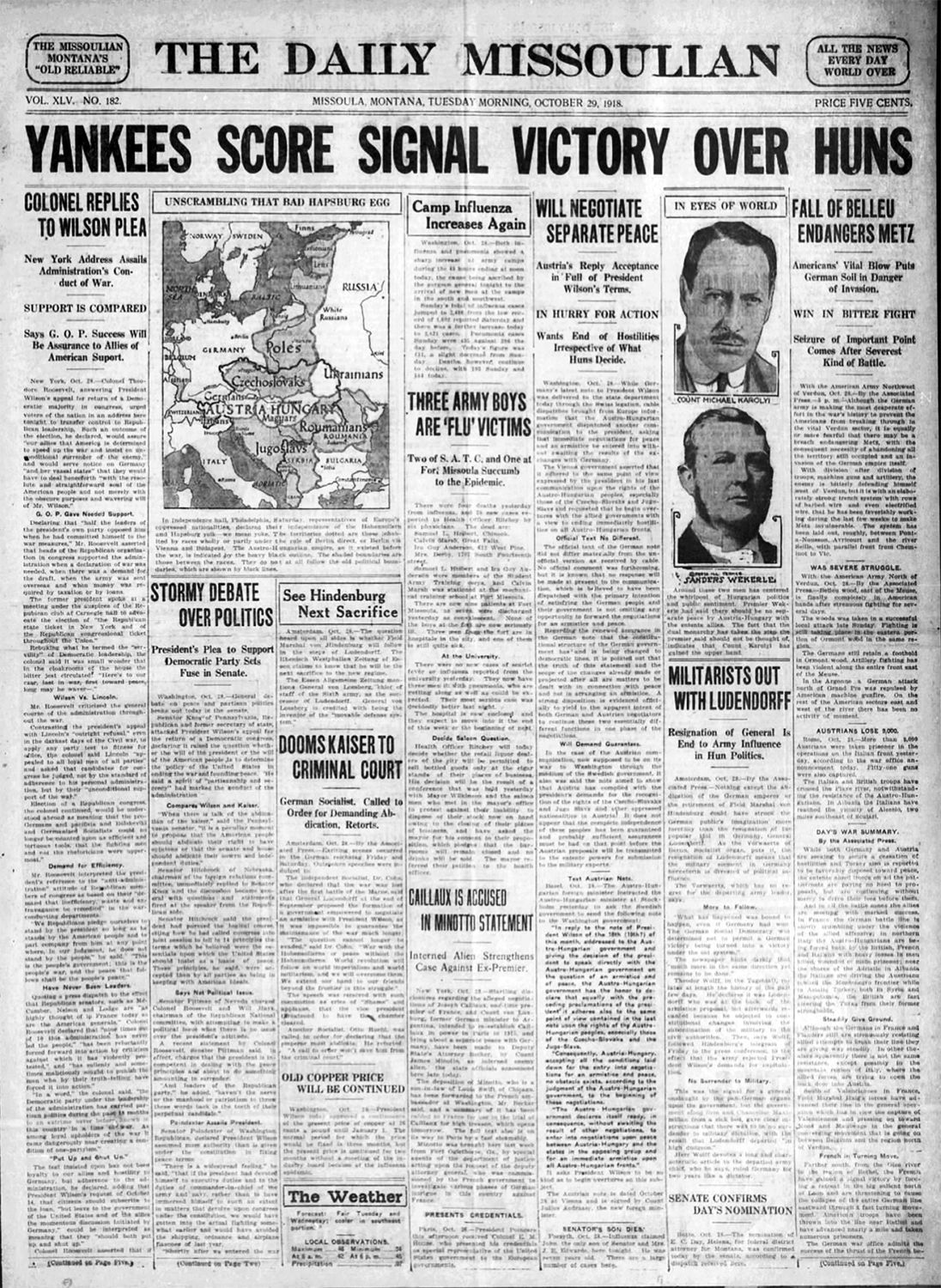 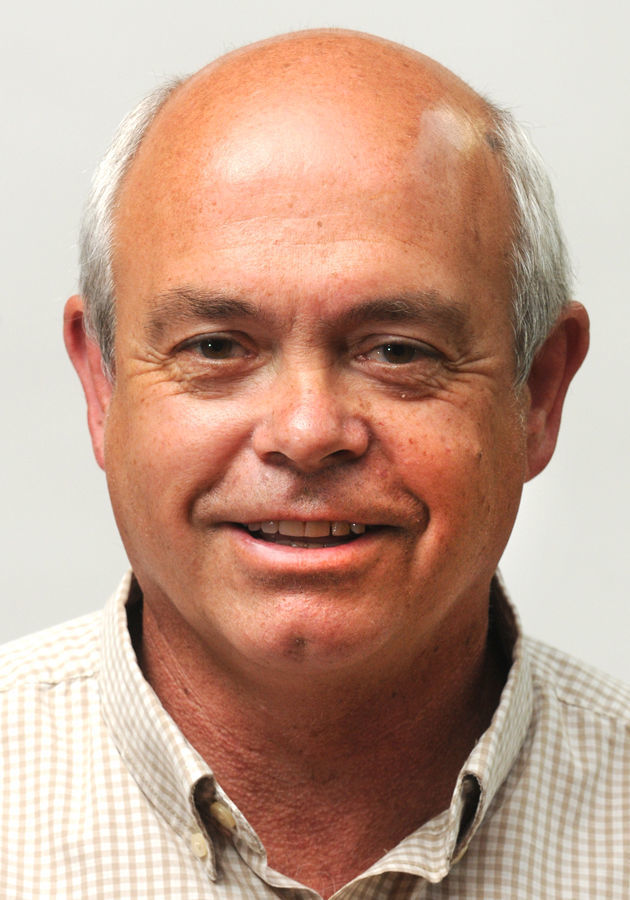 It was a Saturday night in wartime, and they were dancing in the streets of Missoula.

The date was Oct. 12, 1918, a couple of weeks after the United States and its allies in Europe launched the Meuse-Argonne Offensive, the largest and bloodiest battle in American history, and a month before it finally paid off on Armistice Day.

An extra edition printed by the Missoula Sentinel newspaper spread the news that Germany had seemed to accept President Woodrow Wilson’s terms of surrender.

More than 4,000 copies were snapped up, “some of the newsboys making as high as $6 and $7 from their sales,” the Missoulian reported the next day.

The Sunday paper described a joyous scene that was repeated to varying degrees in towns across Montana and the nation.

“Simultaneously with the issuance of the extra, the fire whistle and all the bells and whistles in the city burst out into a din which kept up without the slightest cessation for two hours and a half. Thousands of persons flocked to the business section and joined in the extemporaneous jubilee. Leading citizens paraded the streets, hysterically shouting and cheering, waving flags and singing.”

Those who owned telephones rang them up to find out what was going on. Dozens of fuses on the exchange switchboard downtown were blown, the Missoulian account related.

“The board became one mass of lights, according to Manager R.E. Rice, who flew distress signals and sent a hurry call for extra operators. … So rapidly did they burn out that he was compelled to put one operator to replacing them and doing nothing else.”

An impromptu parade moved up Higgins Avenue from the bridge to the Northern Pacific station “at least a dozen times.”

It was, maintained the anonymous Missoulian reporter, “the greatest celebration which ever occurred in Missoula and probably in western Montana.”

Almost lost on a back page of that Sunday edition: the report of a death at Fort Missoula early Saturday morning, a victim of Spanish influenza.

“The victim was (George Fred) Bonawitz, a young man in training at the fort whose home is in Silver Star,” the newspaper said. It was “the only death from disease in western Montana, so far as could be learned.”

The nationwide influenza virus first arrived in Montana in September. People were dying from it in the eastern part of the state and Fort Missoula was placed under quarantine in early October when two dozen soldiers came down with the bug. Missoula officials went on the offensive on Oct. 9, trying to prevent people from congregating by closing down the schools, churches and all four theaters — the Bijou, Empress, Isis and Liberty.

By Oct. 12 the worst of the outbreak seemed to be stemmed. Even in reporting Bonawitz’s death the Missoulian, in keeping with the celebratory mood, said the “flu” epidemic was rapidly receding in the city.

Heartbreaking. There's no word that better describes a review, 100 years later, of newspaper reports from the rest of that awful month.

On Sunday, after the jubilation had abated, word came of a second influenza death. The victim was 3-year-old Elsie Van Alstine of Alberton. She died at the Thornton hospital, now the Thornton Apartments, just off Orange Street at 508 S. Third St. West. On Monday at 4 a.m., Elsie’s mother Mabel succumbed in St. Patrick hospital.

That left Charles Van Alstine, a telegraph operator for the Milwaukee railroad in Deer Lodge, and Elsie’s 4-year-old sister, Alice. Both survived and lived to their advancing years. Alice Parkison’s obituary in 2001 said after she lost her mother and sister in 1918 she spent much of her growing-up years with her father’s parents at the family homestead in McGinnis Meadows, between Kalispell and Libby.

And so the death roll began.

On Tuesday, Oct. 15, it was Madrick Driscoll, 25, a waitress at the Palace Hotel, and Private Ralph Johnson of a place called Little, Montana. That day word also came that Roy Butzerin of Missoula and Cornelius Van Essen of Stevensville had been killed in action in France in September, and Irma Cody Garlow, only daughter of Buffalo Bill Cody, died of “heart disease superinduced by influenza” in Cody, Wyoming.

Four dead on Wednesday, including 9-year-old Marjorie Mary Hogue and Oliver Bourdeau, age 8 months. Four more on Thursday and three on Friday, “but none of them after 8 o’clock in the morning, “ the paper said, “which led the physicians who are tirelessly fighting the disease here to believe that some progress is being made against it.”

On Saturday there was a double funeral.

“Mr. and Mrs. Anthony Hoffman will be buried side by side this afternoon at St. Mary’s cemetery, while their 3-year-old son, Joseph Hoffman, is ill with the same influenza that took his mother and father.”

Tony Hoffman, 25, grew up in Missoula and worked for John R. Daily, the meat company. He and Elizabeth Johnson of the Frenchtown Valley had married four years before. Elizabeth’s mother and sister had come from Anaconda “to lend aid in a time of sickness and sorrow.”

At least Missoula’s daily death toll wasn’t reaching double digits. Butte was far and away Montana’s largest city with close to 100,000 people at the height of its copper-producing war machine days. The Associated Press reported 33 influenza deaths in Butte on Oct. 25 alone.

Each day, the Missoulian carried the latest influenza update on Page 1. And each day, on a back page, was a full list of war casualties and their home towns, released the evening before by the commanding general of the American expeditionary forces in Europe.

Two hundred, 400, 600 and more names appeared on the daily lists, which broke the casualties into categories of wounded and deaths: killed in action, died of wounds, died of disease, died from aeroplane accident, died from accident or other causes.

The Missoulian topped the lists with a couple of paragraphs identifying the Montanans on them. On Page 8 of the Oct. 25 issue, for example:

“The name of John M. Shaughnessy, son of John Shaughnessy, a rancher five miles west of town, whose death in France from pneumonia was reported in Monday morning's Missoulian, is contained in the list of casualties announced last evening … The deceased was born in Missoula and went into army service last spring. He had been in France for some time.”

There was a time earlier in 1918 when we could afford to be glib.

"The best thing we can do with this Spanish influenza is to change its name and blame it on the kaiser," quipped Arthur ("Bugs") Baer, who wrote a weekly syndicated humor column for the Missoulian.

In the spirit of the time, Baer called the hated emperor of Germany every name but Kaiser Wilhelm.

"Tossing Billhelm the credit for the old Castillian influenzy would make everybody happy except the birds who are suffering from it," he joked, "and at the same time providing the cheeser with another alibi for smearing his already medallion splattered chest with the Spanish influenza medal with four palms and eight sneezes.”

Missoulians read the column on Sept. 10, and chuckled. The influenza scourge was far away, on the East Coast and in army bases around the country. It was the second and much the deadliest of what would be three waves of Influenza H1N1. The first had started in January. The third wouldn’t lapse in Montana until the end of June 1919. By then some 225 people in Missoula County and nearly 4,200 people statewide had succumbed to its effects.

October 1918’s death dance with history crept toward November showing no signs of slowing. It would cast a stilted light on the bookend celebration of Armistice Day on Nov. 11. That’s a story for another week.

The digitization in May 2018 of Missoulian newspaper archives (missoulian.newspapers.com) back to 1890 promised to open new worlds for local researchers and history buffs.

Now it spawns Missoula Rewound, a weekly spin through past Missoulian papers in which we hope to recapture a sense of how we were living and what we were reading in the days of yore. No result will be darker than the first one. We ran a search for “influenza” and turned the wayback machine to October 1918. Things got ugly fast.

University of Montana deans and department heads have a month to plan for slimmed-down instructional budget targets.

The University of Montana is facing a $966,614 penalty for reporting "inaccurate and misleading" crime statistics — on everything from liquor …

Sometimes all you need to get some exercise is a buddy’s encouragement.

A violent wind roared into Missoula on the evening of Dec. 27, 1892. It was still blowing when an unknown, high-spirited Missoulian reporter s…

Families and pallbearers only: Even funerals restricted during 1918 flu crisis

The Spanish flu gained a tighter grip on Missoula in week three of October, 1918, with a rising death toll and other heartache.

Let's see if we can reconstruct that night.