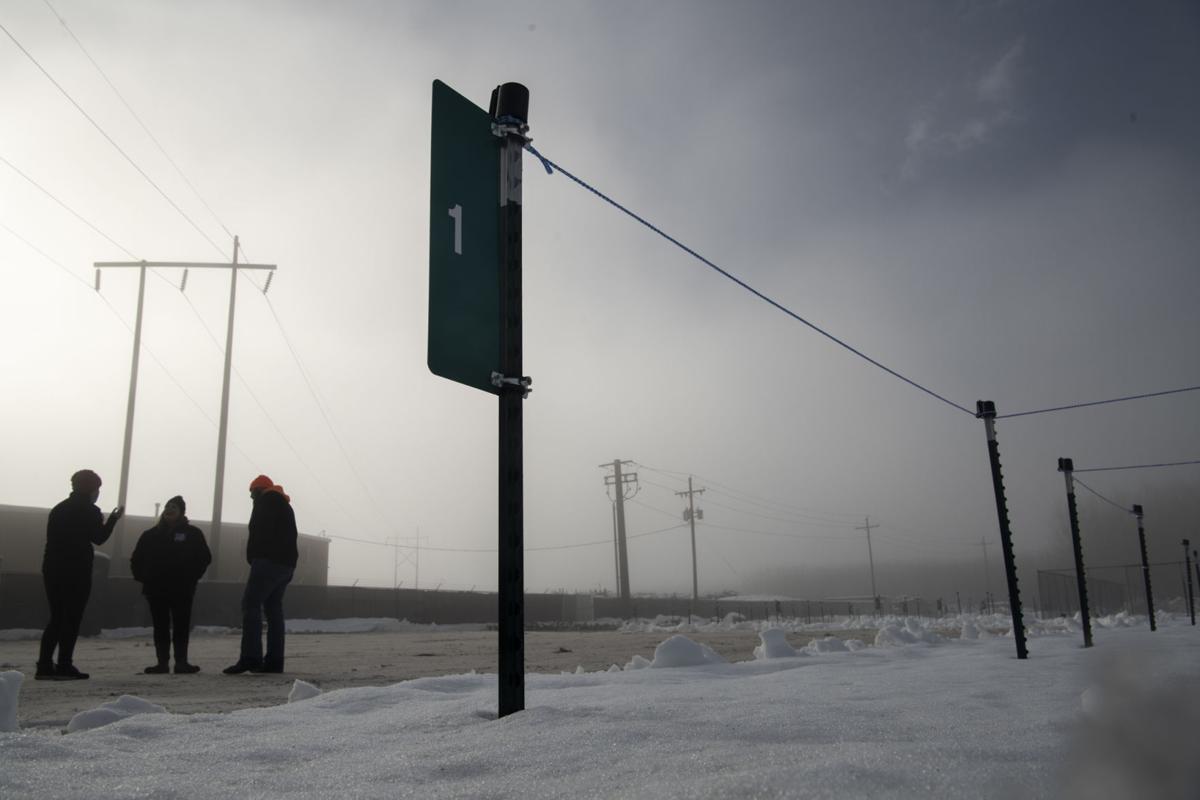 Jill Bonny, executive director of the Poverello Center, and members of the Poverello Center’s Homeless Outreach Team speak with members of the media at the new Authorized Camping Site on Clark Fork Lane on Thursday. The site is part of Operation Shelter, an initiative by city officials to address unauthorized camping throughout the city and county. 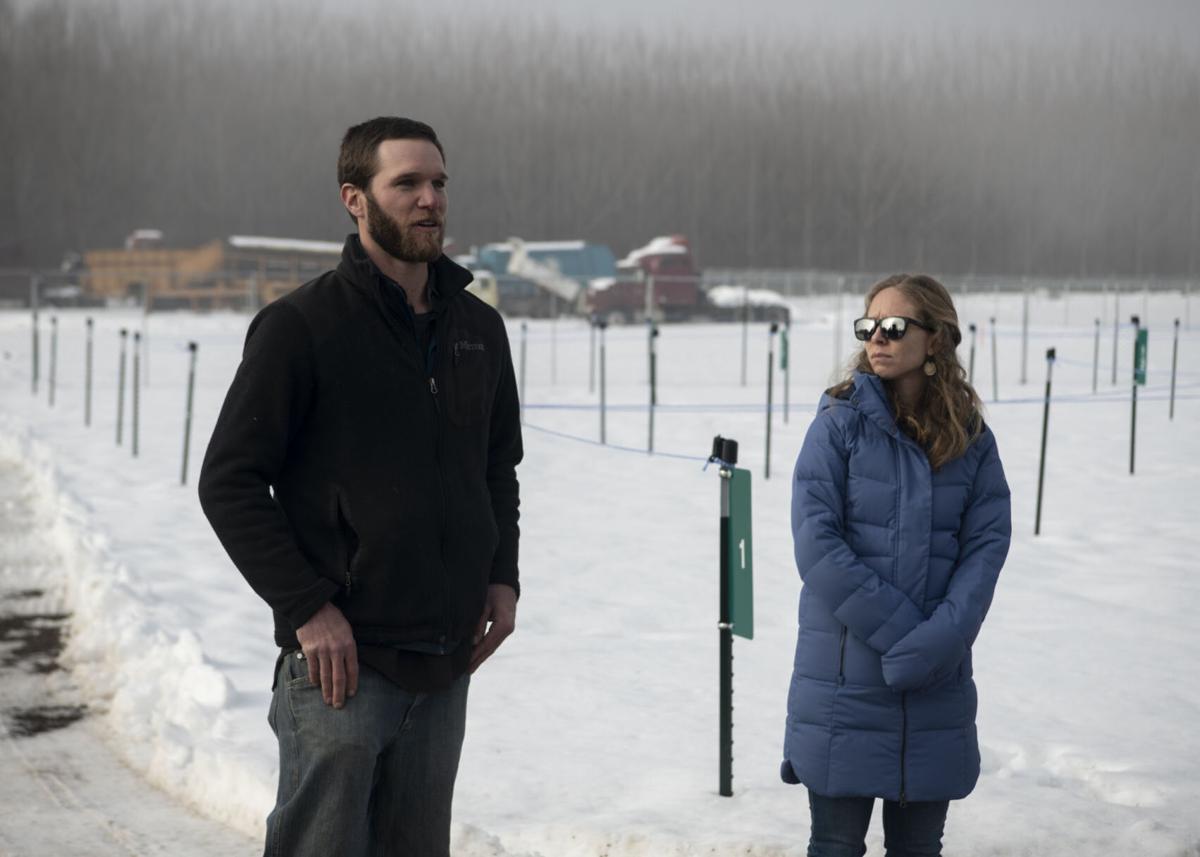 Casey Gannon, the project coordinator, and Emily Armstrong, Reaching Home program manager, speak on the details of the project.

A new 40-space legal camping spot for houseless people will open in Missoula on Tuesday, Jan. 18 on Clark Fork Lane behind the Super Walmart on Mullan Road.

Meant to replace illegal and ad hoc camping areas such as the site beneath the Reserve Street Bridge, the new Authorized Camping Site will feature 24/7 security staff presence, trash removal, outhouses with sanitation and visits by outreach teams.

“As (county) Commissioner Josh Slotnick often says, doing nothing is not an option,” explained Missoula mayor John Engen. “So the Missoula County commissioners and I, along with the city council and our collective staff partners, have agreed that we’re going to experiment with a number of approaches that we hope temper suffering in our community.”

The site is the first option to open through Operation Shelter, which was launched last year by the county and the city to address unauthorized camping in the urban area. The site is on city-owned property and federal American Rescue Plan Act money was used to set up the site and equip it with toilets, hire security and pay for other logistics.

“Our goal here continues to be making sure that everyone who wants to live in a home has access to that,” Engen said. “(The site) is a little bit off the beaten path, particularly with regard to residential neighborhoods, and we believe creates a safe opportunity for folks to live and begin to have the resources they need to be permanently housed.”

There will be fire pits for warmth and quiet hours. Pets must always be leashed or caged, and no drugs or alcohol are allowed in public spaces. Other than that, there are no barriers to entry to the site.

The residents will provide their own tents and supplies, but members of the Poverello Center’s homeless outreach team often visit all the unhoused people in Missoula to bring them camping gear, food and anything else they need.

Guy Johnson, the lead homeless outreach team member, said they’ve been talking with people under the Reserve Street Bridge and other areas for almost a month to give them a heads up that camping in unauthorized spots in Missoula will no longer be allowed to continue. Beginning on Jan. 24, the Montana Department of Transportation will no longer allow camping under Reserve Street. Engen said illegal camping will no longer be allowed anywhere in the city, and law enforcement can be called if necessary. But Johnson said the goal is to avoid that by not blindsiding people.

“We’ve been really encouraging and letting folks know about the new authorized campsite opening up,” Johnson said. “We’ve had some really good feedback from the folks there. I believe we will have a good turnaround amount of people show up to the new location. It’s just a matter of time, but I have high hopes for this.”

The Poverello Center homeless shelter has been operating at capacity, meaning they are completely full every night, according to Jill Bonny, the Pov’s executive director. The Johnson Street winter shelter has had about 100 people sleeping there every night recently, and Bonny said that shelter has a capacity for about 150. The 15-20 people who have been camping at the Reserve Street Bridge site do so even with the knowledge that there is a warm shelter where they can sleep, she added.

Johnson said some of the people at the Reserve Street Bridge have been there for years, and the recent blizzard didn’t seem to bother them too much.

“They handled it surprisingly well,” he said. “This is what they do. They deal with it.”

Emily Armstrong, the Reaching Home program manager for the city, said there’s a tremendous amount of collaboration among various government agencies and other community partners to reduce the number of houseless people in Missoula.

“I pulled numbers recently and I think we’re around — this is a flexible number — but around 150 people in the Coordinated Entry System that were able to find housing when we have a vacancy rate of .38%,” she said. “So honestly, that’s pretty incredible that that many people are entered now into a housing solution because of only the hard work of our providers.”

Engen said that the city and county have met with surrounding business owners, and described it as fairly contentious.

“That’s the challenge here,” he said. “No one wants the homeless camp next to them. So we’re doing our best, again, to balance those interests. I think the comfort that we hopefully provided was security, a list of resources, somebody you can call.”

Engen said the city and county studied what went wrong in authorized homeless camping spots in places like Seattle. He noted that in those places, huge lots were cleared and government officials simply told people they could camp there. The lesson learned, Engen said, was that the site has to have necessary support services and can’t be too big.

Commissioner Dave Strohmaier said that he knows the site is not without risks and challenges.

"I resonate with the frustrations that members of the public have had for quite some time," he said. "But a lot has been going on behind the scenes to get to this point where we are today."

He said he's proud of everyone who worked on the plan.

"It's surprising how difficult dealing with some of these intractable issues are, and creating this space here, which is only one prong of a multi-pronged effort to address the challenges of houselessness in our community, was a heavy lift to get to this point," Strohmaier said.

"The agreed-upon purchase price assumes rent increases and higher profitability in order to justify the sales price," said a letter from the property management company.

“We are advocating for women in poverty," said the executive director of Mountain Home Montana.

There are 11,700 households in Missoula County that earn only half of the area median income.

The nonprofit YMCA relies on donations from the community to fund free or low-cost memberships, childcare, youth sports activities and other services.

Jill Bonny, executive director of the Poverello Center, and members of the Poverello Center’s Homeless Outreach Team speak with members of the media at the new Authorized Camping Site on Clark Fork Lane on Thursday. The site is part of Operation Shelter, an initiative by city officials to address unauthorized camping throughout the city and county.

Casey Gannon, the project coordinator, and Emily Armstrong, Reaching Home program manager, speak on the details of the project.