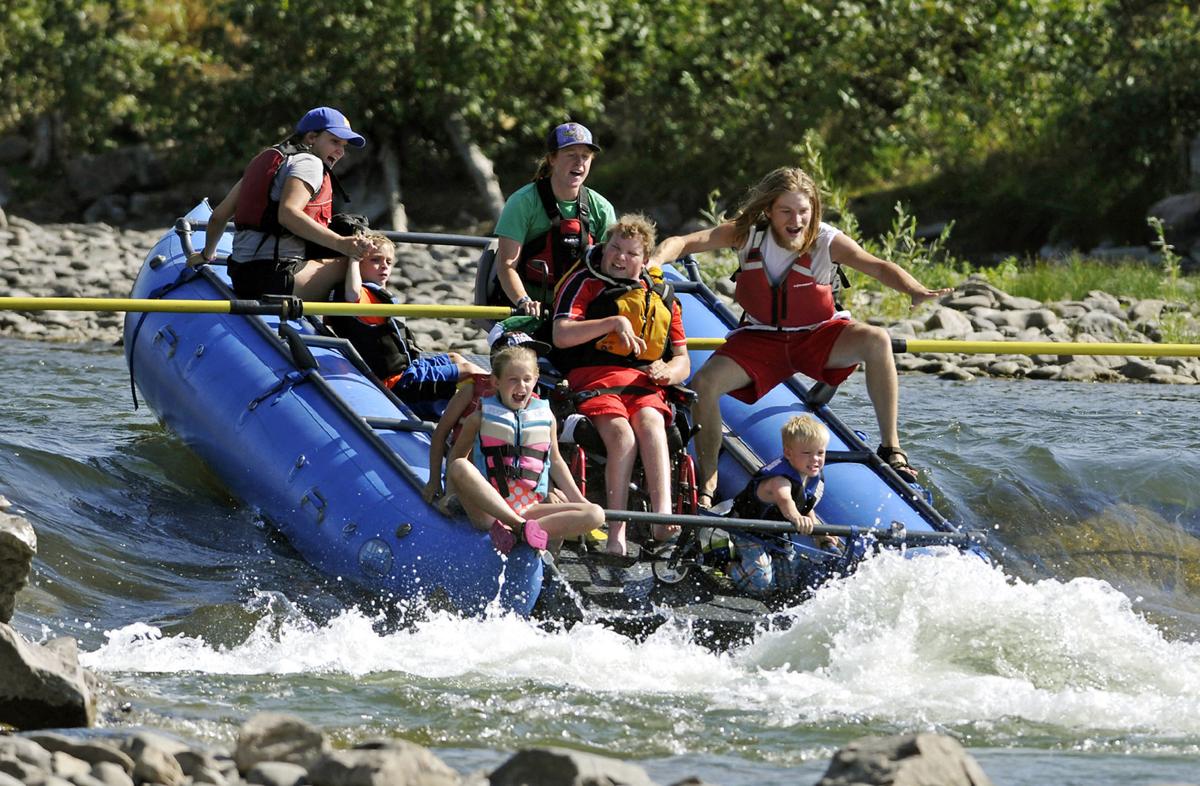 Cody Nulliner, at center of raft, rides over Brennan's Wave on the Clark Fork River in Missoula recently with his caregiver Bryce Ketterling, right, and other campers and staff. The inclusive summer camp is a chance for kids with or without disabilities to participate in fun activities together. 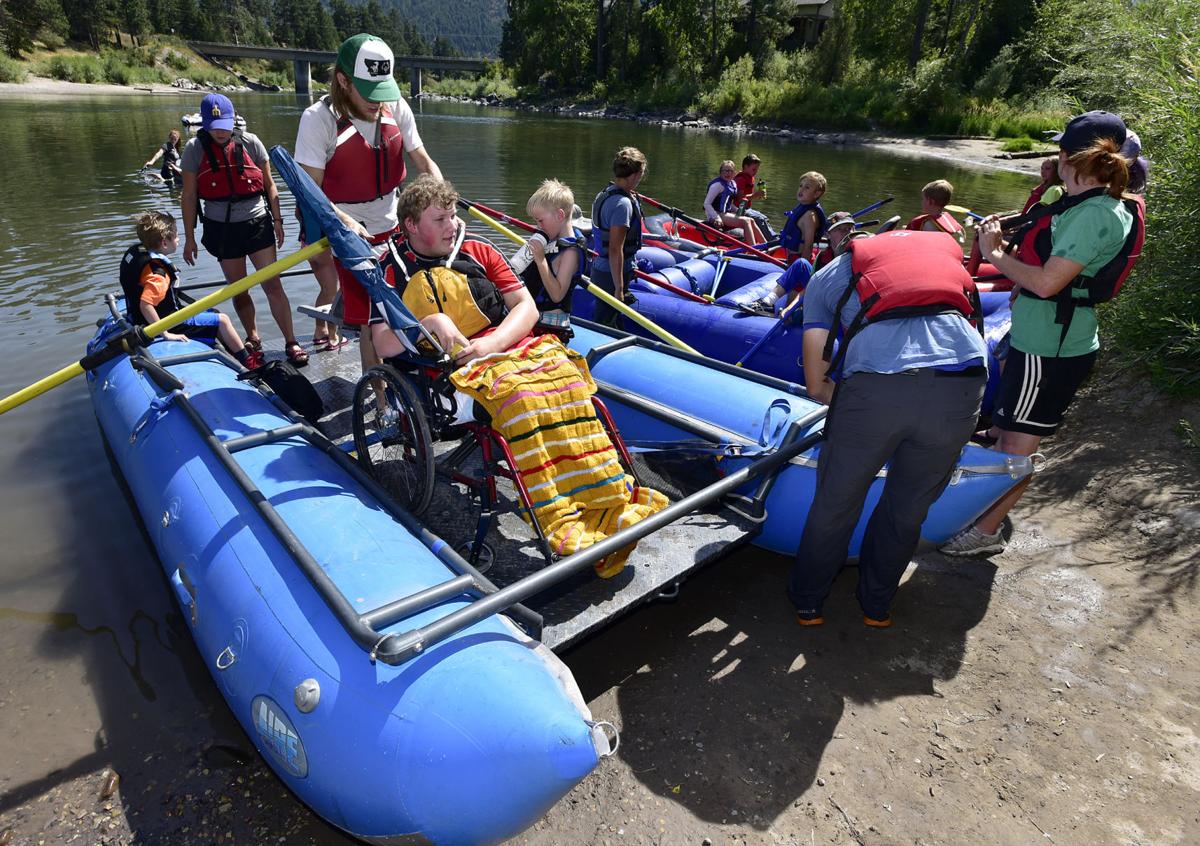 Cody Nulliner's wheelchair is strapped onto a metal platform on a raft that will take him and other summer campers from the Sha-Ron river access in East Missoula down the Clark Fork to Missoula.

Cody Nulliner, at center of raft, rides over Brennan's Wave on the Clark Fork River in Missoula recently with his caregiver Bryce Ketterling, right, and other campers and staff. The inclusive summer camp is a chance for kids with or without disabilities to participate in fun activities together.

Cody Nulliner's wheelchair is strapped onto a metal platform on a raft that will take him and other summer campers from the Sha-Ron river access in East Missoula down the Clark Fork to Missoula.

Cody Nulliner wants to be in the middle of the hubbub.

The 19-year-old was hanging out with his caregiver, Bryce Ketterling, at Silver Summit playground in McCormick Park on Wednesday afternoon before the kids went whitewater rafting. Nulliner has cerebral palsy and a rare genetic condition. He's non-verbal for the most part, but he lit up as they got ready to head to the Sha-Ron put-in.

"He understands much more than he can say," said his mother, Amy Nulliner.

It's the second year of Reach More, a Missoula Parks and Recreation half-day summer camp for children of all abilities. But "the focus is so not on their disability," she said.

Instead, it's giving children with disabilities the opportunity to participate in summer fun – alongside all children.

"It's good for all the other kids to see that someone who uses a wheelchair can go rafting and do all these great things," said Reach More coordinator Megan Apple. "We encourage everyone, with or without disabilities, to play together outside."

Wednesday was Cody's fourth time whitewater rafting this summer. They use an adaptive raft that secures his wheelchair for a safe, fun ride on the river.

"He loves it," Ketterling said. "Kids jumping into the water, the spray guns, watching everyone mess around just adds to his excitement."

The conversation began in early 2015 between Parks and Rec and the Child Development Center.

"We do have some really wonderful opportunities for kids with disabilities, but unfortunately they're limited and they don't get the opportunities that other kids do," said CDC public relations specialist Jamie Wolf. "And they're separate, not with the typically functioning kids."

Most of the shift came in training camp staff on how to work with kids with physical disabilities and different behaviors. Apple said the all-day intensive summer camps can be overwhelming for some kids with disabilities. Reach More has more staff for fewer children, giving them more one-on-one attention.

"Sometimes they have to make modifications to the activity or maybe they need some specialized adaptive equipment or maybe it's just making sure staff are prepared to interact with those kids," Wolf said.

And it opens up opportunities for kids with disabilities that the CDC wasn't able to do in its own – such as whitewater rafting.

"Parks and Rec has worked so hard on developing this program so our kids could have the same great summers as typically developing kids," Amy Nulliner said. "They get to access the community in the same way. Before the last couple years, that wasn't possible.

"To be doing what everyone else is doing, it kind of makes me cry as a mom."

Apple corralled the 11 campers under a tree in the park, explaining how to be safe on the raft and how to treat one another.

Apple told the campers – whom she called her "nuggets" – to wave to Cody, and say hi. She reminded everyone to "be kind, and get to know Cody."

Cody has a lot of medical issues. Five days of camp last summer was too much for him, so Parks and Rec allowed a flexible schedule. Cody used to have some ability to walk, but after a surgery didn't go well a couple of years ago, he lost that. Now he's in a wheelchair and "it's been hard for him to adapt," Amy said.

"Now he's making a lot of strides again and figuring out how to still be part of things," she said.

He was certainly part of the fun Wednesday. While he can't talk, Cody makes sure everyone knows one another and he enjoys watching the crowd interact. It doesn't hurt that he's a huge fan of Ketterling, who's worked with him for about two years.

"He loves introducing people," Amy said of Cody. "It takes the pressure off of him, but he still gets to be involved. That's what he loves about camp, is watching the interactions of people.

"He loves being part of things, anything where he can cheer and clap."

Sometimes, a person in a wheelchair who can't control its movement will feel left out, Amy said.

People naturally move in social situations, and while they may start out talking to someone in a wheelchair, they eventually start to mingle.

"That's been one thing with camp – and especially with Bryce – that's been great is they make sure that Cody isn't left on the periphery," Amy said.

Wolf said the CDC hopes to move this inclusive effort elsewhere, to "have inclusion be part of our value system in Missoula in the recreation community.

"They have their recreation expertise, we have our expertise," Wolf said. "A lot of it was just training and opening up that conversation."

Families of children with disabilities may be hesitant to get involved in a summer camp, Wolf said, whether it's concerns about the organization's ability to work with the child or fear of judgment.

"How often would he ever get to do something like this?" Ketterling said. "These guys make it possible and available and easy, above all things."

To learn more about Reach More, go to www.ci.missoula.mt.us/1727/All-Abilities-Inclusive-Programming.

"It's good for all the other kids to see that someone who uses a wheelchair can go rafting and do all these great things. We encourage everyone, with or without disabilities, to play together outside."

Inclusive in Missoula: Organizers learn to make kids' camps fun for everyone