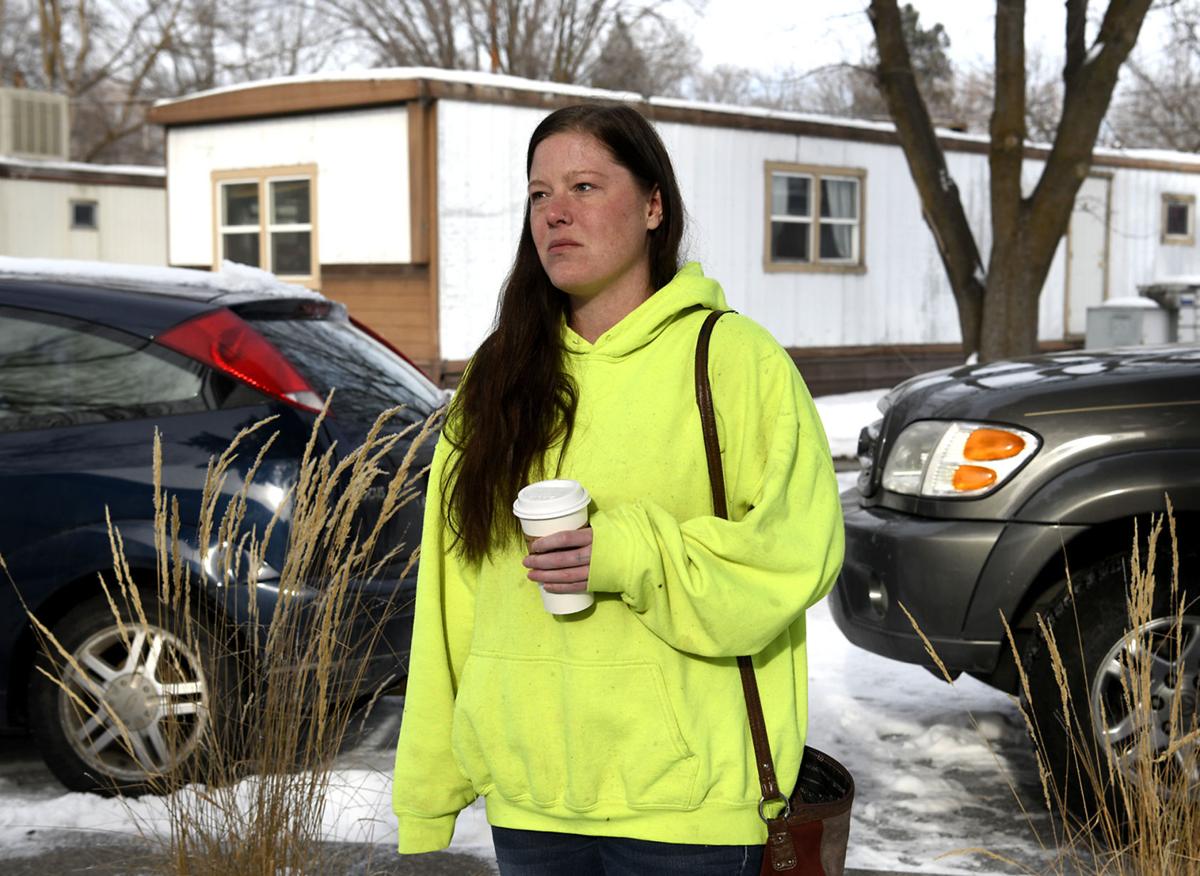 Miranda Maxson is one of the residents of El-Mar Trailer Village who is seeing  lot rents increase more than $100 a month after an out-of-state company bought the trailer court. 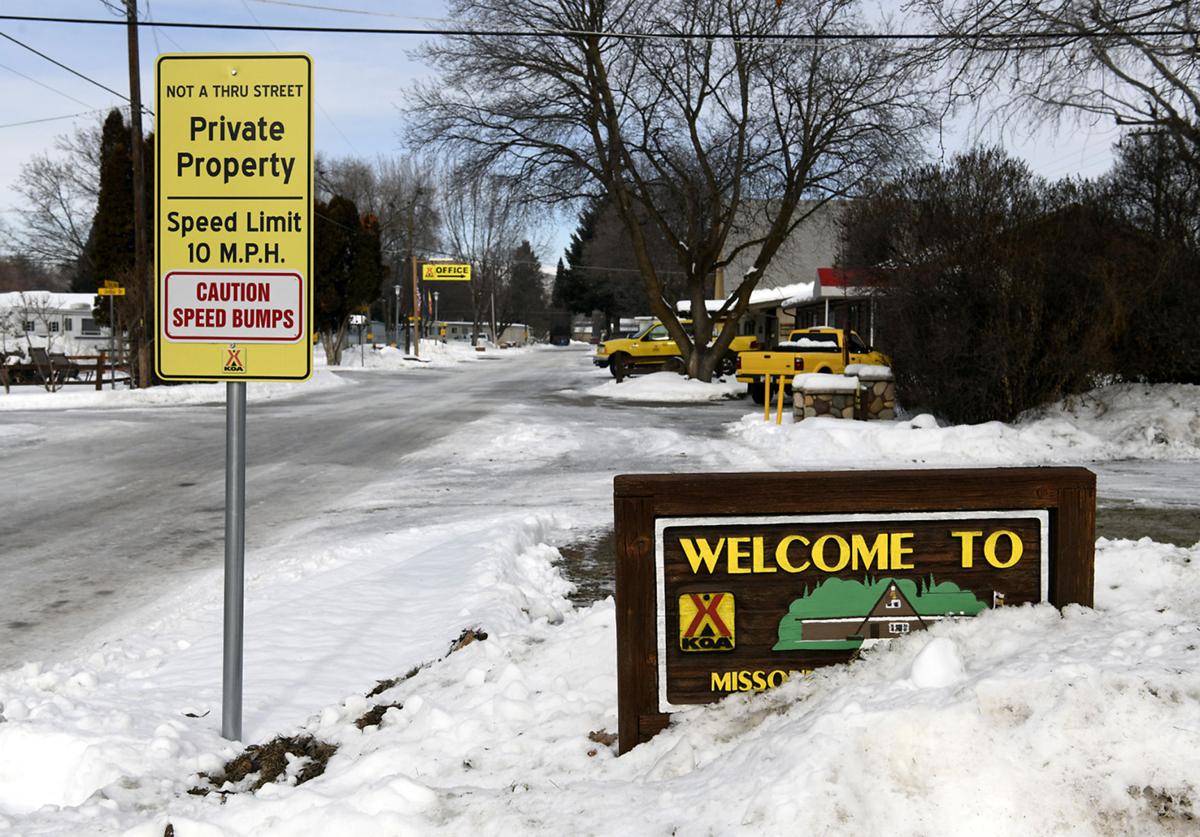 El-Mar Trailer Village is adjacent to the Missoula KOA campground, which owned and managed the trailer park for decades.

A recent rent hike by an out-of-state buyer may force some residents of the El-Mar Trailer Village in Missoula to be displaced.

"We're not thrilled about it," said David Jenkins, who has lived in the trailer park with his wife, Dori, for 34 years.

The increase — more than $100 per month — may seem low by current Missoula rental standards, but they say it's unsustainable for low-income tenants.

"We're more concerned about the elderly people living here that are on fixed incomes and people that will be forced to move out," Dori Jenkins said. "This is a community here. A lot of people have been living here for decades and there's nowhere to move their trailers."

The trailer court had been owned and managed by the nearby Missoula KOA campground's owners for many decades. The new owner has hired Missoula Property Management to take over management of all aspects of the trailer park.

Now, residents of more than 50 trailers and RVs in the park face an uncertain future and rising rent.

"It may not come as a surprise, the current lot rent for the park is well below the market rent in Missoula," the letter to all residents from Missoula Property Management stated. "In addition, the agreed-upon purchase price assumes rent increases and higher profitability in order to justify the sales price. It is necessary to implement a rent increase in order to ensure operating expenses are covered and the park remains solvent."

Miranda Maxson, who has lived in Missoula almost her entire life, said she's been paying about $340 a month for a corner lot for the last three years. The last owner would only raise the lot rent by about $10.

Now, because she works from home, she's going to simply pack up her things and move to the small town of Shelby, Montana, where she can afford to buy a house.

"It's just so uncertain," she said of the future at El-Mar. "I think it's been a long time coming. The price of housing here and then the shortage of actual places to live has just been getting progressively worse, and I don't see it getting any better."

Maxson and the Jenkinses haven't seen a marked improvement in maintenance since Missoula Property Management took over, despite the rent increase announcement, they said. The road-plowing after the recent storm was minimal, and now the roads are just a packed sheet of ice. A mail truck even got stuck.

The letter from Missoula Property Management sought to alleviate some fears about future displacement, however.

"When the property was placed on the market, there were multiple offers and unlike the other offers, fortunately the selected buyers intended to keep the park mostly intact," the letter said. "The immediate goal is to separate the trailer park from the RV park (at the KOA next door). MPM will manage the mobile home park and the RV park will be managed by generally the same management team in place last year."

However, in order to properly accomplish the separation, "a small number of homes" primarily located along Sherri Street will "need to be removed" from the park, the letter said. Missoula Property Management could not be reached for comment Monday.

"Those impacted will be contacted directly with timelines and given adequate notice to relocate," the letter said.

Dori Jenkins said El-Mar was an affordable and safe place to raise a family.

"It's been a great place to raise kids," she said. "We know a lot of our neighbors, and a lot of people here have been here for decades. It's a community."

She and her husband can find a way to deal with the lot rent increase by cutting back on other things, she said. They don't want to move, mainly because they have nowhere else to go and no other options since housing prices and rent prices have skyrocketed in Missoula in the last decade.

"Like I said, I just feel bad for the older residents here," she said. "Our main concern is the poor people that have to leave on Sherri Street. Why? Why do that?"

Kade Karstens, another resident of the park, estimated that the lot rent increase is a 50% hike for him.

"I can deal with it, but I'm not sure about some of my neighbors," he said.

Maxson said it's tough to say goodbye to her home.

"I'm sad too," she said. "I've really gotten to know some of my neighbors. I hope everything here works out. I don't know how many people are going to stay."

She understands that rents are going to increase, although she's concerned that the higher rents for RVs is meant to force those residents to leave, she said.

"All throughout Missoula, they've been getting rid of trailer courts and stuff and you can't even find a place to put an RV anymore," she said.

Renters displaced by rate hikes as prices escalate in Missoula

Mackenzie Cole got an email late on a Saturday night that said his rent was going from $590 per month to $1,100 a month in 30 days.

A project to build 70 permanently affordable homes on Missoula's Northside is still moving forward and more designs have been released.

Unauthorized camping in Missoula will no longer be allowed, and the new site was set up using federal funds.

One of the recommendations in the Missoula County Housing Action Plan is to explore funding sources, such as bonds, for affordable housing.

Miranda Maxson is one of the residents of El-Mar Trailer Village who is seeing  lot rents increase more than $100 a month after an out-of-state company bought the trailer court.

El-Mar Trailer Village is adjacent to the Missoula KOA campground, which owned and managed the trailer park for decades.