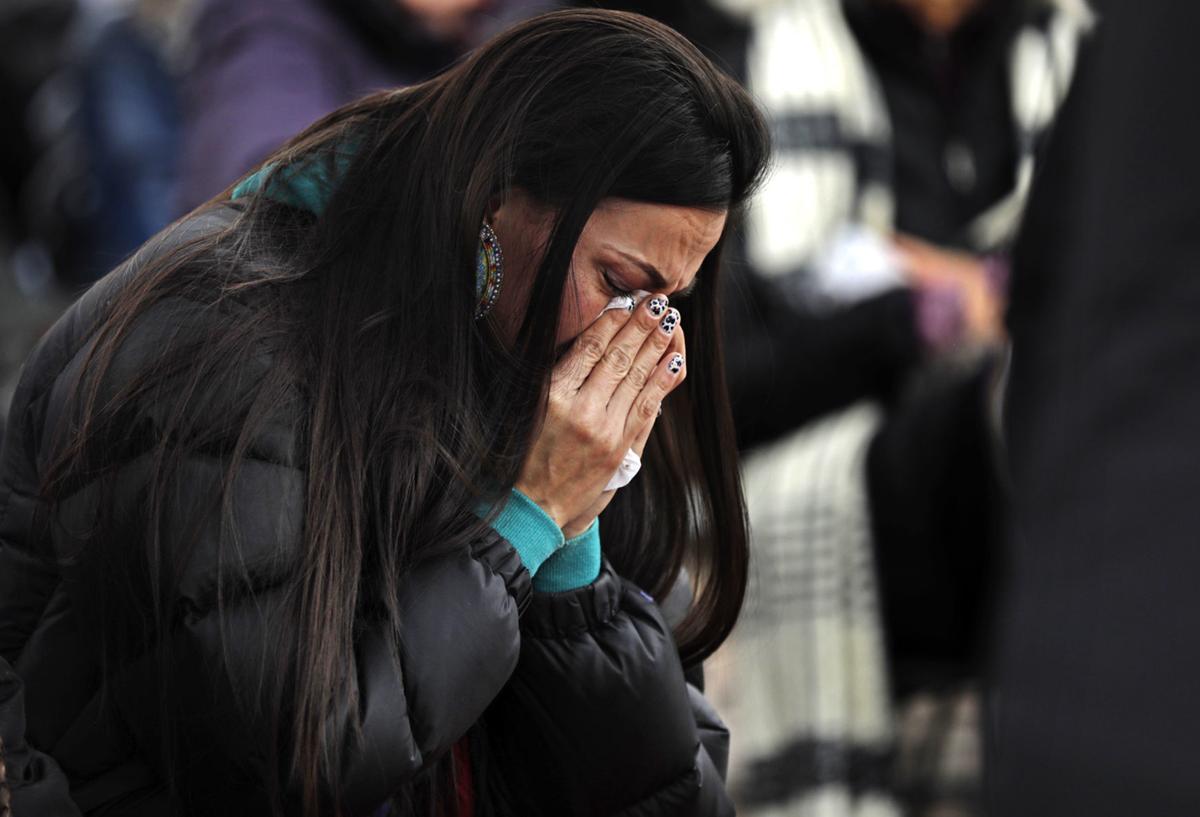 Valenda Morigeau, aunt of Jermain Charlo, a missing indigenous woman from Montana, cries during a candlelight vigil and education awareness event for missing and murdered indigenous women at the University of Montana in January. Charlo, in her early 20s, went missing in June 2018. 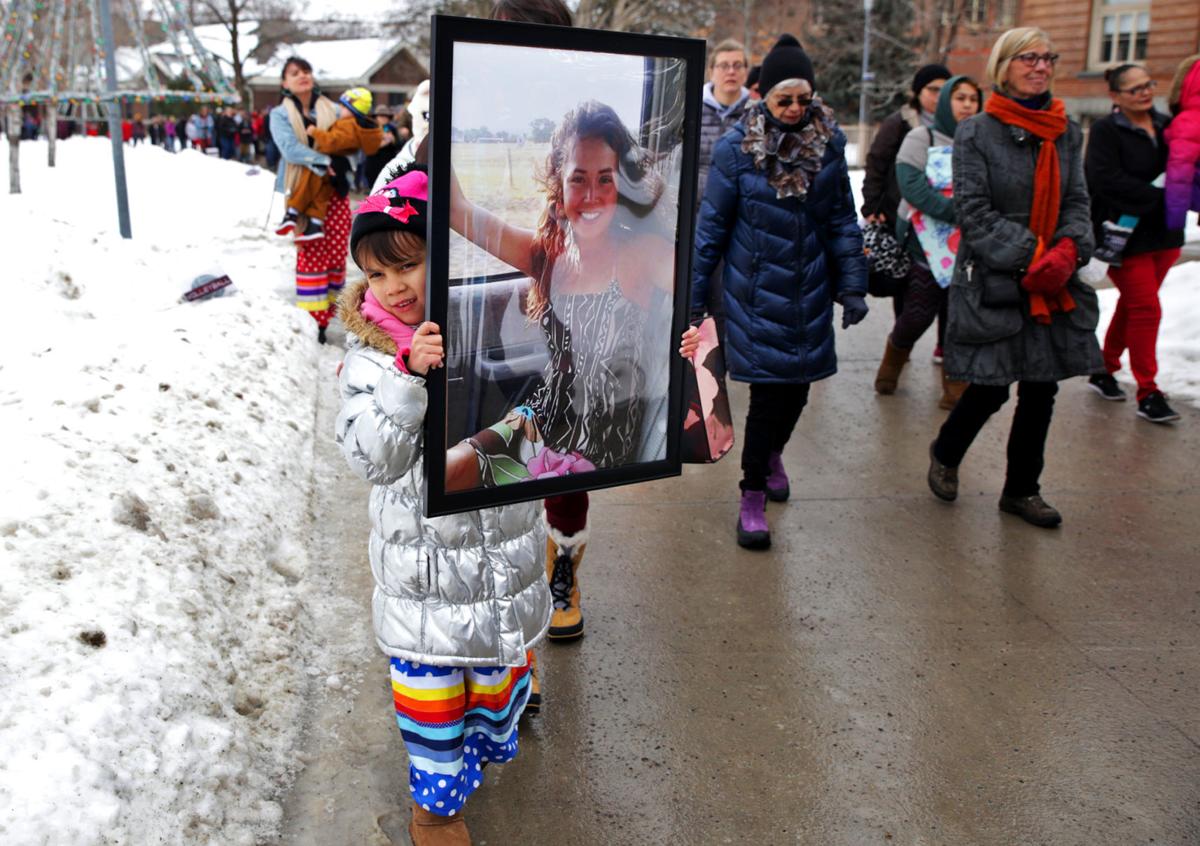 Ayasha Momberg, 6, holds a photo of her cousin Ashley Heavyrunner Loring, 20, who disappeared from the Blackfeet Indian Reservation in north-central Montana in the summer of 2017. 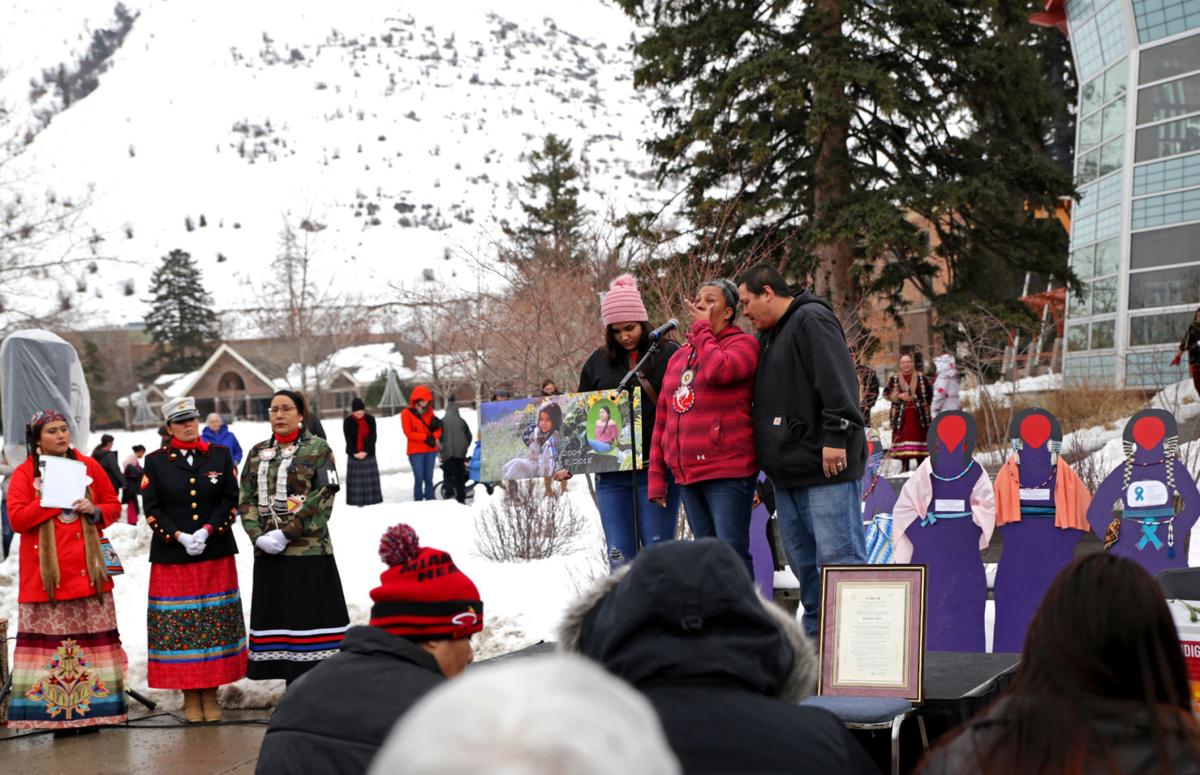 Paula Castro, center, the mother of Henny Scott, a 14-year-old girl from the Northern Cheyenne Reservation whose remains were found on Dec. 28, is comforted by her husband Nathan Stops, right, as she cries while speaking about her daughter's disappearance to a crowd at the University of Montana on Saturday afternoon.

The cause of missing and murdered indigenous women drew roughly 500 demonstrators to the University of Montana campus Saturday afternoon.

They gathered for a "Vigil on Behalf of Missing and Murdered Indigenous Women," held in front of the university's Payne Family Native American Center. Native women face a far higher risk of violence than their non-native counterparts.

This grim trend has gone on for decades, said one of the speakers, Mary Jane Charlo, before the vigil.

“These kinds of things have been happening even when I was a small child, but for some reason they were never reported,” said Charlo, a member of the Confederated Salish and Kootenai Tribes’ Selis-Qlispe Culture Committee. “There’s a lot more awareness of it today, but now we just need legislation” on the issue.

Awareness of kidnappings and murders in Indian Country — and the need for policies to stem them — has grown in recent years. The disappearance of Ashley HeavyRunner Loring from the Blackfeet Reservation was among those shared at a Senate Committee on Indian Affairs hearing in December.

Saturday’s event aimed to continue that trend and channel that awareness into action. The event facilitator, Lauren Small Rodriguez of the Northern Cheyenne tribe, explained in an email that “a group of Native women united to bring attention to this issue because it affects our families and we need our voices to be heard.”

The vigil, she noted, was the first completely Native American-led event in Montana. The event was sponsored by the Native American Law Students Association and supported by the Confederated Salish and Kootenai Tribes and several student groups and nonprofits (while it took place on the same day as this year’s Women’s March, it is not affiliated with that movement).

At the outset of the rally, as Theda New Breast held up a poster board with dozens of missing and murdered Native Americans, Small Rodriguez told the audience “it is not only a moment of awareness. This is an (educational) moment. This is a moment where everyone will hear all of these stories, will hear policy, and it is up to you with what you choose to do to help stop this crisis.”

The guests rounded the oval in silence, holding candles. Then, they stood in the drizzle for hours as family members of Loring and other women from throughout Montana recalled long, agonized searches, and police departments that showed little interest in their plight. They also discussed the need for greater resources, data and protocols for handling missing-persons cases in Indian Country.

Detective Guy Baker with the Missoula Police Department gave an update on one of these cases: Jermain Charlo, a 23-year-old Dixon woman who vanished last June. He said that MPD, along with other local, tribal and federal agencies, had expended over 2,000 man-hours in the search, and that “we have expended a ton of resources — local, state and federal — to find her.”

But he also acknowledged the frustrations with law enforcement often raised with this issue.

“That law enforcement does not respond” swiftly in a missing-persons case, he said, “just baffles me.” Baker voiced hope that by working together more closely, law enforcement and tribal communities would be “successful in eradicating the apathy” that’s accompanied these cases.

Speakers repeatedly voiced hope that Montana lawmakers would act this session by passing Hanna’s Act. Introduced by Rep. Rae Peppers, D-Lame Deer, and named for Hanna Harris, found dead in 2013 on the Northern Cheyenne reservation, it would authorize the Montana Department of Justice to assist with all missing persons investigations, and create and fund a missing persons specialist within the department.

“I just want a process where it’s not going to take this long” for authorities to take action, said Paula Castro-Stopps, whose daughter, Henny Scott, was found dead on the Northern Cheyenne reservation last month. “That’s why I support the act …That is that process.”

As policy-makers debate these and other measures, vigil attendee Emerine Kenote said knowledge of the issue itself was vital. A member of the Prairie Band Potawatomi, Menominee and Salish tribes, she said “I would like to sit there and be more aware…[to see] people take a stand.”

She was joined by Bridget Gibbons, a University of Montana graduate student whose sign said “Allies like me MUST do better!” A non-tribal member, she said that “even though it might not be in my community, I need to inform myself, I need to volunteer, I need to elect officials [to take action on] this issue.”

“There are still things I can do,” she said.

Missoula-area snow expected to continue through Monday, 3 to 6 inches possible

The National Weather Service predicts that snow will continue in the Missoula area through Monday morning, with three to six inches of accumul…

RONAN — As lawmakers in Washington and Helena seek to improve the handling of cases involving missing and murdered Native American women, the …

The Confederated Salish and Kootenai Tribes are now offering $10,000 for information that leads to criminal charges in the case of missing tri…

Dozens of demonstrators lined the Higgins Avenue bridge Saturday, to voice their opposition to a massive telescope planned atop the Hawaiian v…

Sex is a reusable commodity, which means perpetrators of human trafficking stand to make lots of money off of victims without a lot of financi…

Valenda Morigeau, aunt of Jermain Charlo, a missing indigenous woman from Montana, cries during a candlelight vigil and education awareness event for missing and murdered indigenous women at the University of Montana in January. Charlo, in her early 20s, went missing in June 2018.

Ayasha Momberg, 6, holds a photo of her cousin Ashley Heavyrunner Loring, 20, who disappeared from the Blackfeet Indian Reservation in north-central Montana in the summer of 2017.

Paula Castro, center, the mother of Henny Scott, a 14-year-old girl from the Northern Cheyenne Reservation whose remains were found on Dec. 28, is comforted by her husband Nathan Stops, right, as she cries while speaking about her daughter's disappearance to a crowd at the University of Montana on Saturday afternoon.