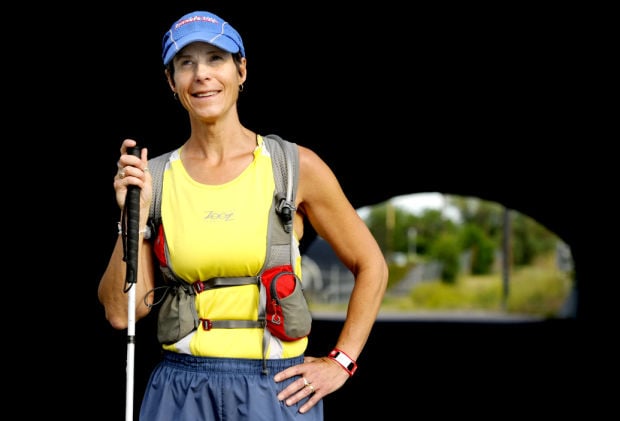 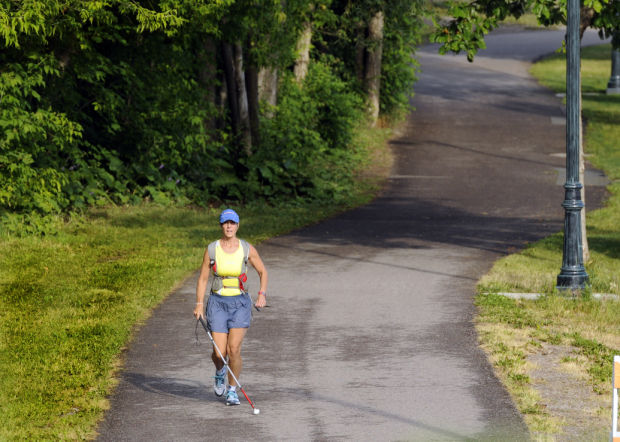 Copeland, who has run about 1,300 miles so far this year, relies on other runners or spectators to help guide her on the Missoula Marathon course. “I have angels watching out for me all over the place,” she says.

Since 1997, the Missoula native has slowly been losing her eyesight due to a genetic disease known as retinitis pigmentosa. The disease causes photoreceptor cells in the retina to die, which in turn causes black spots in vision and eventually blindness. Copeland likened what she’s able to see to an overexposed photograph. She can distinguish objects, but few details and even less color.

“There’s almost a little bit of urgency because I don’t know how long my eyes will allow me to,” she added.

That sense of urgency has propelled her to run the Missoula Marathon several times.

Each year, the race’s crowded start gives her a bit of anxiety.

“There’s always this voice in the back of my mind going, ‘Why am I doing this?’ ” she said.

The answer is simple and reassuring – her love of running.

“My big enough ‘why’ is that because of my limited eyesight, I want to experience the marathon and running as much as I can,” she said.

She only took it up in 1992 because a co-worker wouldn’t quit bugging her to be a running partner. Copeland still didn’t like it until she ran by herself one day, at her own pace.

“And that was what got me,” she said.

She also liked the changes she saw in her body and how it made her feel, so she kept at it, but never seriously considered a marathon until Missoula’s inaugural one in 2007. Because the race was on her home turf, where she was less likely to get disoriented, Copeland decided to try it.

“When I finished that marathon, I swore, I’m never running another one. And I meant it, until I didn’t,” she said.

“And not because I’m blind – it was hard,” she said, adding that she continued to run the half marathon.

Then, as she blogged about her experiences and worked to complete her book, “Running Blind: The Journey of a Blind Runner Training for Her First Marathon,” she started to change her mind.

Putting her training into words helped her realize she would do things differently if she ran another marathon.

So she did in 2010, with much better emotional and mental results, although her time was the same as in her first marathon.

Her vision continued to deteriorate and she limited herself to more defined trails and began using a cane. The new running accessory made her feel like people were staring.

Then she decided it didn’t matter.

“I can’t see them anyway, so I’m just going to do it,” she said, laughing.

The cane was just one more adaptation in a long line of changes in how she runs and lives since the vision loss began. Instead of focusing on the challenges, Copeland focuses on the opportunities.

All people must overcome challenges in life. Blindness is hers, she said matter of factly.

She had to give up other hobbies, including photography and stamping, but never running.

“Running was something I just wasn’t willing to give up,” she said.

Because she runs the same route so often and uses her cane, people recognize her and are always willing to help her if she becomes disoriented or an obstacle is ahead.

The same holds true on race day, when orange cones marking the route are difficult for her to see. Other runners or bystanders will help guide her around obstacles and through the last portion of the course, she said.

“I have angels watching out for me all over the place,” Copeland said.

“I welcome all help and contact with people. It’s pretty awesome,” she said.

People often tell her she inspires them. Her running also has inspired Whiteside.

“She makes it hard to have excuses as to why you can’t do stuff,” Whiteside said.

Instead of giving up, Copeland adapts.

“One of the things that I was impressed with about her from the very, very beginning is that she is fearless,” Whiteside said.

Copeland said she didn’t set out to be inspiring. She just loves to run.

While she’s been changing how people look at things, running marathons has changed her.

Overcoming her blindness was the hardest thing she’s done, Copeland said. Knowing that helps her break through exhaustion during the races.

“I was able to push through that knowing that this is difficult, but that was more difficult,” she said of her first marathon.

“It’s not until we’re pushed or pressured a little bit that you find out what you’re capable of, and the marathon did that for me,” she said.

For more on Copeland, go to runnerinsight.com.

Jeff Galloway ran to the top of the “M” trail in 1971 when he came to Missoula to take part in a U.S. Olympic Committee training camp. The rig…

It isn’t every day 4,000 people participate in the same race.

However, that very unlikelihood will become reality Sunday at 6 a.m., when the seventh annual Missoula Marathon commences.

Shawn Lewis is traveling from Washington state to run the marathon in Missoula, and he’s bringing a whole troop along with him.

As of Thursday, the 2013 Missoula Marathon has helped to raise over $78,000 so far this year for Missoula area charities through Crowdrise, an…

Copeland, who has run about 1,300 miles so far this year, relies on other runners or spectators to help guide her on the Missoula Marathon course. “I have angels watching out for me all over the place,” she says.