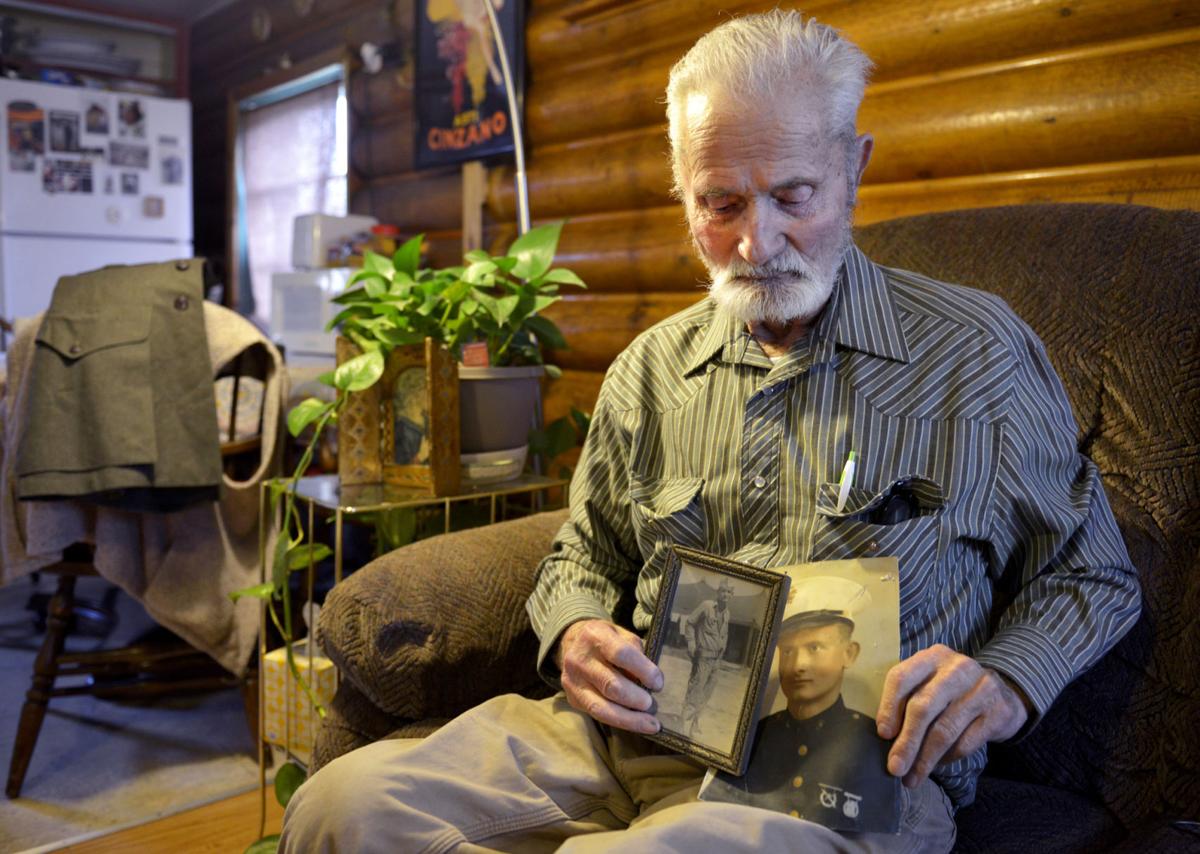 Marvin Strombo sits in his Missoula living room on Veterans Day holding two pictures of himself during his time as a private during WWII. Strombo served in the 6th Marine Regiment and was deployed to Tarawa, Saipan, Tinian and Nagasaki. 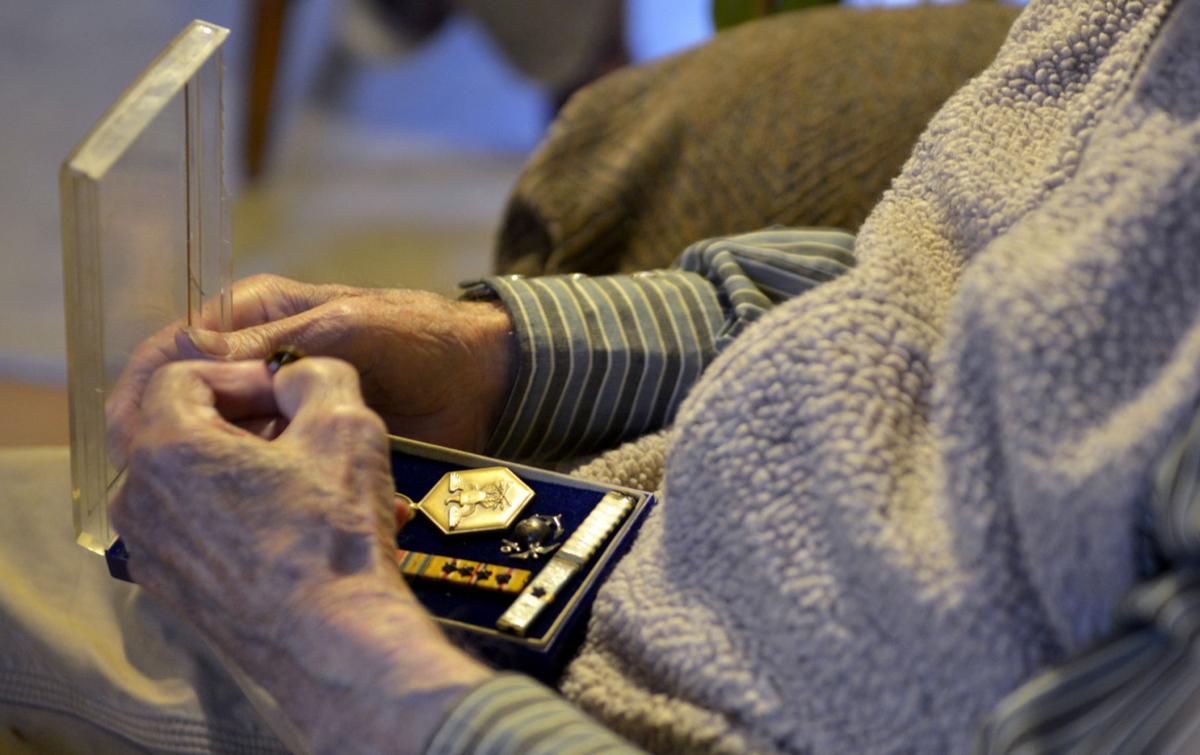 Marvin Strombo holds the medals he acquired from his services in WWII. Strombo could recall what most of the medals were, but admitted they weren't really a big deal in comparison to his time spent overseas. 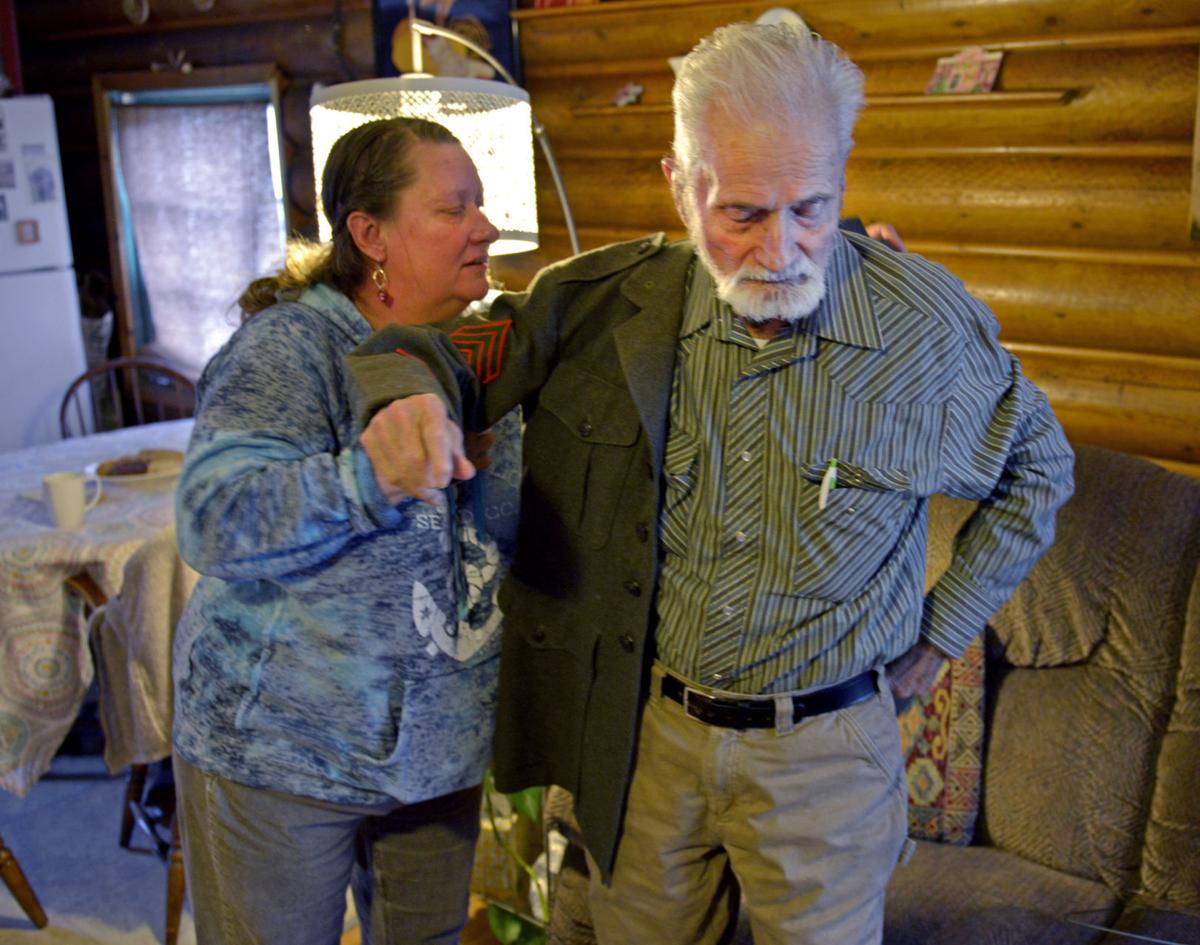 Sandra Williamson, helps her dad, two-time war veteran Marvin Strombo, try on one of the jackets he obtained after the Korean war. The Dixon native, who will be turning 93 next month, said he weighs 142 pounds, the same as he did during World War II. 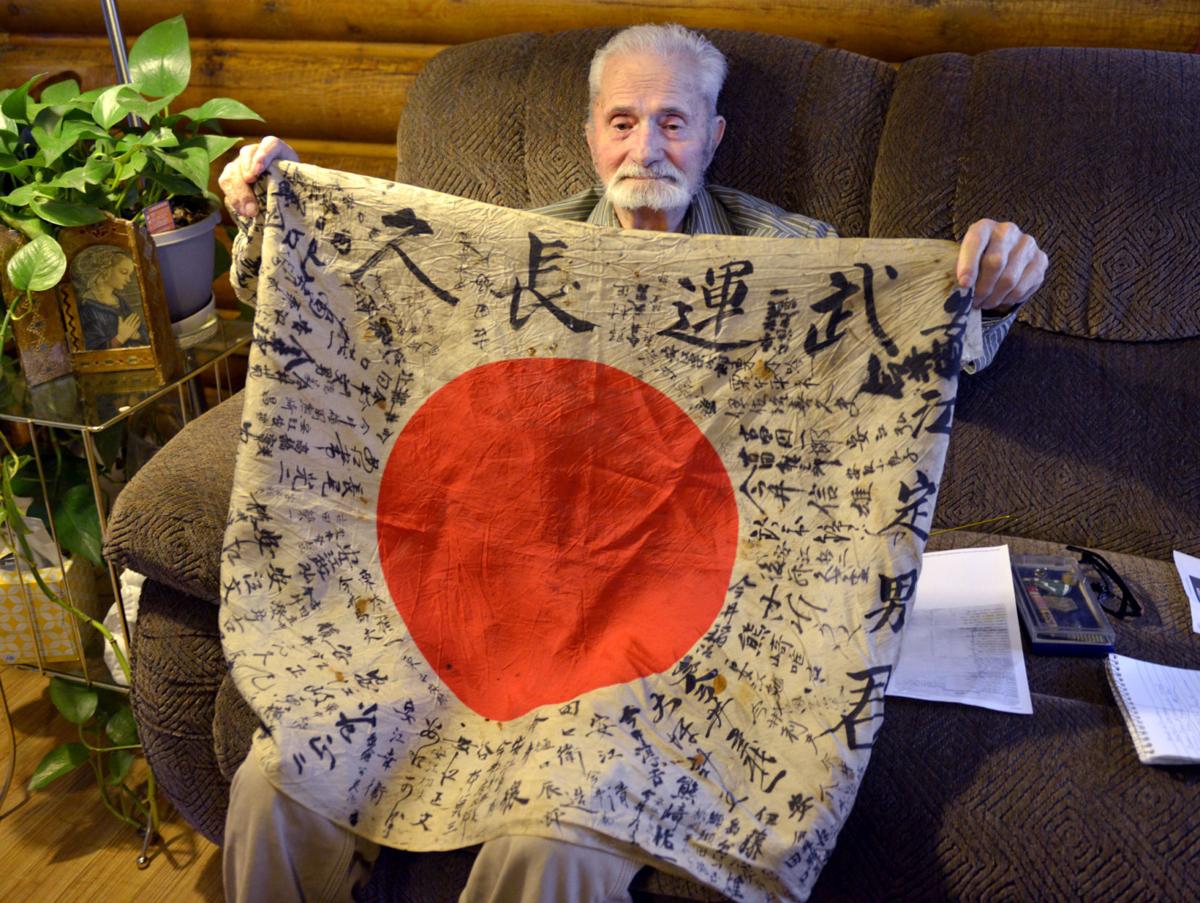 Two-time war veteran, Marvin Strombo, holds a flag that he took off the body of a Japanese officer in 1944 during the Battle of Saipan. It has been a wish of his to find the officer's family and return the flag.

Try as he might, he can never shake the memory.

Marvin Strombo was fresh out of high school in Dixon, with the voice of his mother Mary waking him up each morning still all but ringing in his ears.

Now he was boots-deep in war on the Pacific island of Tarawa, and the voices were much different.

“The scaredest I ever got,” Strombo, 92, said Friday in a Veterans Day interview at his Missoula home. “You can describe a banzai (attack) to people, but you don’t know it until you see it.”

He was a 19-year-old private in the 6th Marine Regiment, in a platoon that had been up all day fighting as the United States launched its Central Pacific campaign against Japan in November 1943.

“So dang tired, but all at once here’s all this screaming and whatnot,” he said. “You look over there and here’s hundreds of Japanese coming at you, running toward you trying to kill you. I just froze almost. Scared to death, but soon as the fighting started you had to get over it.”

Strombo has always been good at flying under the radar.

He’s lived a quiet life on Fairview Avenue in Missoula for more than 50 years in the same log home in which he singlehandedly raised four children.

Strombo didn’t talk about it, so it wasn’t until the last few years that even his family learned of his role in the South Pacific during World War II in a 6th Marine Regiment platoon known as the “Forty Thieves.”

They’re certain now of what they suspected all along.

“My dad is probably the biggest hero I know,” Sandra Williamson said. “He has been the cornerstone for all of us, and he’s always been there for our kids as well. He’s our quiet hero.”

Turns out Strombo, who’ll turn 93 next month, is the oldest and most active of three remaining “Forty Thieves,” a daring scout-sniper platoon that made its name behind enemy lines on Saipan in 1944.

He, Roscoe Mullins of West Virginia and Bob Smotts of Georgia have been a gold mine of information for Joseph Tachovsky of Madison, Wisconsin, who is in the final stages of a book “Forty Thieves: Saipan.” A restaurant consultant, Tachovsky started piecing together the story of the “Forty Thieves” after his father died five years ago and when six Thieves remained.

First Lt. Frank Tachovsky, known to his men as “Ski,” was commander and Strombo a private of the scout-sniper platoon that his son calls “the beginnings of the Navy SEALS.”

His father didn’t talk much about the war either, Joseph Tachovsky said this week, but his eyes were opened when he found an article from the December 1944 issue of Leatherneck Magazine. It was called “Tachovsky’s Terrors” and featured “some of the craziest, fiercest, most lovable Marines” who “have wreaked havoc in, around, and mostly behind the enemy lines.”

“Every time we needed a bottle of something we somehow got it,” he said, with a grin.

But they were also masters at covert operations, disrupting the enemy in their own camps, tracking locations, and bringing back information, Tachovsky said.

Frequent interviews with Tachovsky have opened the faucet to stories that Strombo long suppressed, even as nightmares of war continued to dog him.

He tells of the day he was in a five-man squad that sneaked into Garapan, the capital of Saipan, in broad daylight and came back riding five bicycles. That trip started by foiling an ambush along the ocean shore in which one of his mates, Ira Causey, spotted the glint of a rifle and opened fire, probably saving Strombo’s life.

One of the Japanese involved was wounded and fled to the water, where Strombo shot and killed him.

“I felt kind of bad,” he said. “We could have taken him prisoner, but you don’t think. You just start shooting.”

After U.S. troops overran Saipan in July 1944, they moved on to Tinian, a key island within bomber distance of Tokyo that would be the launching pad for the Enola Gay and its atomic cargo a year later. Strombo, who later served in Korea, would finish his World War II service in a devastated Nagasaki, a few weeks after the atomic bomb was dropped there.

But before the assault on Tinian began, the Marines were called back to Saipan, where the Japanese had overrun U.S. Army troops.

There he witnessed more horrifying sights. Rather than being taken alive, Japanese soldiers committed hari-kiri by jumping off a cliff near Garapan called Marpi Point.

“They thought the Marines were so bad they’d cut you to pieces, so many of them just took their own lives,” Strombo said. “Whole families would hold hands and walk out into the ocean (to their deaths). We saw some of that.”

American interpreters pleaded by amplifier with the civilians.

“They tried to tell them, 'Don’t do it, because you’re safe and nothing bad will happen to you.' But they didn’t listen,” Strombo said.

Strombo was the youngest of four brothers, all of whom fought in World War II and came home safely. Oliver was in a different Marine regiment fighting the same battles Marvin was. Dick and Glenn were with the Army in Europe.

Their homecoming in Dixon “really wasn’t much.”

“Most of us came home and it was, ‘Well, hi, where have you been?’ I know it was quite a relief for our mother and whatnot,” he said.

All these years later, Strombo thinks of the Japanese he fought and killed with respect.

On Saipan, as the Forty Thieves lurked in the front lines, he came upon a dead Japanese officer. Japanese soldiers often absconded with American dogtags as mementos, while the Americans claimed hinomarus, the Japanese national flag that often had tributes and names of the families of the soldier.

“Everybody wanted a flag and also sabers were kind of hard to get because there wasn’t that many officers,” Strombo said.

He laid claim to both and carried them with him for the rest of the war and, eventually, back to Montana.

Some “dirty thief” broke into Strombo’s Missoula home in the late 1970s and stole the saber, he said. But the flag remains, and now one of the last of Forty Thieves wants to give it back.

Is there a way, he wonders, to trace the names on the flag to the Japanese officer’s descendants? If so, he’d be honored to return it.

The morning fog had just started to lift Friday as Army Sgt. Samuel Redfern and Betsy Mulligan-Dague met and hugged after the conclusion of th…

When you're playing music, particularly when you're just starting out, not much else can weigh on your mind. That's the way Clinton Decker feels.

And so the search begins.

His excitement is that of a young boy going on a great adventure. Come August, that’s what Marvin Strombo will be doing.

The culmination of Marvin Strombo’s dream is at hand.

The enemy no more, 93-year-old Marvin Strombo of Missoula cut a dashing and humble figure Monday night in the faraway mountain village of Higa…

FLORENCE — Two generations removed from World War II, Naoki Yasue wasn’t privy to its poignancy while growing up in Japan.

Marvin Strombo sits in his Missoula living room on Veterans Day holding two pictures of himself during his time as a private during WWII. Strombo served in the 6th Marine Regiment and was deployed to Tarawa, Saipan, Tinian and Nagasaki.

Marvin Strombo holds the medals he acquired from his services in WWII. Strombo could recall what most of the medals were, but admitted they weren't really a big deal in comparison to his time spent overseas.

Sandra Williamson, helps her dad, two-time war veteran Marvin Strombo, try on one of the jackets he obtained after the Korean war. The Dixon native, who will be turning 93 next month, said he weighs 142 pounds, the same as he did during World War II.

Two-time war veteran, Marvin Strombo, holds a flag that he took off the body of a Japanese officer in 1944 during the Battle of Saipan. It has been a wish of his to find the officer's family and return the flag.