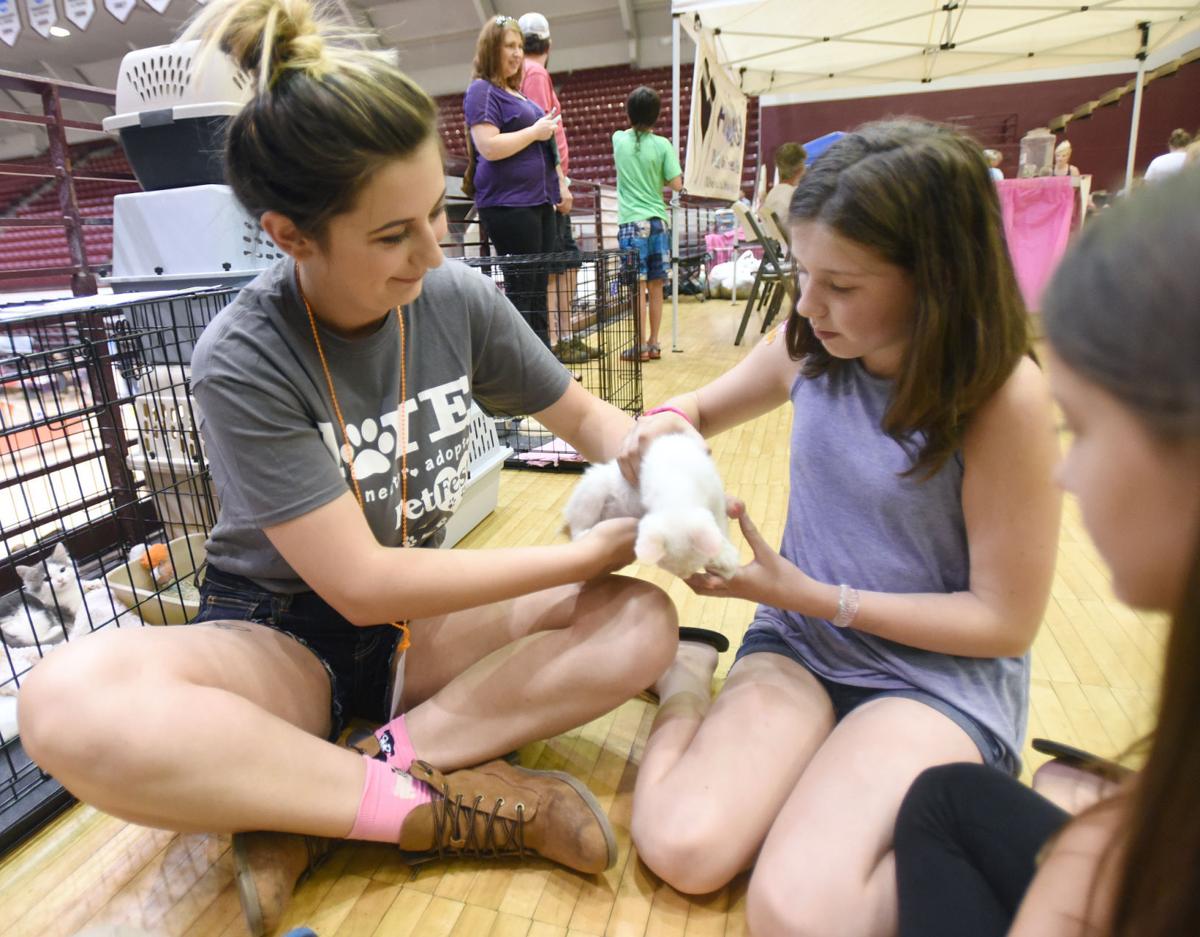 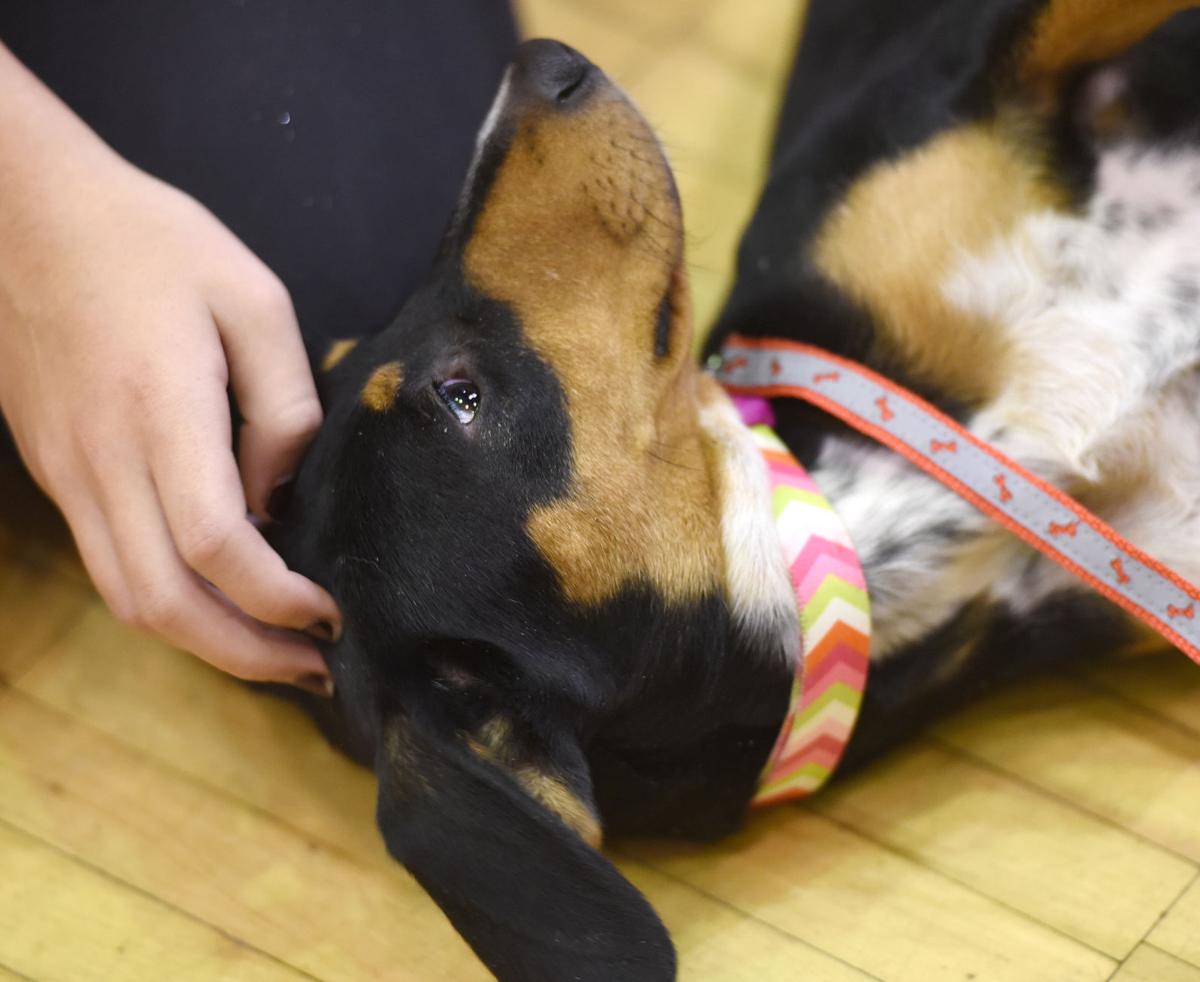 A newley adopted dog named Brie looks up while getting a head scratch. Pet Fest organizers and mother-daughter team Linda Baumann and Megan Pfaff want people to get their pets licensed and spayed or neutered, they discourage breeding and puppy mills, and they want people to "adopt, not shop.

The Adams Center was full of temptation on Saturday.

The 11th annual Pet Fest filled Dahlberg Arena, replacing the typical cheers with barking. For 12-year-old Kodi Fraser, it was tough to face reality: she couldn't bring home the chihuahua puppy, Sasha, that she was cuddling.

Her mother, Kim Fraser, said they do their part by volunteering at the Humane Society of Western Montana, but one dog at home is about all they can handle right now.

That dog is Dempsey, a Boston terrier who kept a close eye on all of his potential new housemates.

"My mom won't let us bring home another dog either. When we went to a different pet fest, we brought home Cora," said 14-year-old Ella Brinkman, Fraser's neighbor, pointing to the small dog at her side.

Sometimes, the reality is that you can't take care of a dog or cat.

They want people to get their pets licensed and spayed or neutered, they discourage breeding and puppy mills, and they want people to "adopt, not shop." Beyond that, Pet Fest is an opportunity for pet owners to head to Adams Center to learn more about grooming, veterinarians and more.

"There are so many owner turn-ins at the shelter," Pfaff said. "Some say they didn't realize the dog was going to get this big, or they travel a lot and they don't have time to take the dog on a walk."

It's important to do your homework and know what you're getting into before buying a pet, she said. They're not cute accessories; owning a pet is a responsibility.

Pfaff visited her first dog, Oscar, every day for five days to make sure it would be a good fit. Oscar, a Lhasa Apso-poodle mix, was a stray. Her second dog, a terrier dachshund named Molly, was an owner turn-in.

"Before I had kids, they were my children," she said, pointing to her daughter running around nearby and to her belly, another baby due in October.

Pfaff wants to see Pet Fest grow, especially since it's in a relatively new location.

Until three years ago, Pet Fest was in Caras Park. It moved to the Adams Center for more temperature control, since those hot August days were tough on the animals.

But they've seen participation in the events drop, although adoptions remained at about 90 percent.

"We just want people to bring their pets and come enjoy it," Pfaff said.

That joy was evident on the upper floor where adoptions were taking place. At the Humane Society's area, people swarmed the kittens — especially one, Monkey, who fell asleep the second anyone held him and gave him a scratch.

By 12:30 p.m., three puppies, two kittens and one dog had already been adopted.

Volunteer Pat Markert had to put down his rottweiler four years ago, which led him to volunteering at the Humane Society.

"I didn't want to take on another pet full-time," he said. "I was one of those people who thought, 'I can't even go in the shelter or I'll want to bring everyone home with me.'"

It helps that it's a no-kill shelter. And every once in a while, he'll take a dog home for a few days to give it a mini vacation.

Events like Pet Fest are a good way for people to figure out what type of pet they're looking for: a rambunctious puppy or kitten, a calmer one- or two-year-old pet, or maybe a slower, older cat or dog who's looking for a "retirement home," Markert said.

"The one thing I've been surprised by volunteering here is the overall quality of the dogs they get," he said. "So many I've met are just awesome dogs. And of course puppies and kittens, they're a blank slate, so they're all good."

If Brinkman had her choice of dogs, she'd want a black Labrador. Her sister, 12-year-old Elise, had another idea.

"A chihuahua, something Cora's size," she said.

The dimly lit corridor sloped downward and ran to the right, though the blazing sunlight 180 feet away still found their eyes around the sligh…

HAMILTON – Bruce Jones spent his youth soaring through the skies as a fighter pilot with the U.S. Air Force.

Missoula’s latest wave of refugees has begun. A family of six Congolese arrived in town Thursday from East Africa, and the first five-person f…

HAMILTON – When John and Anita Andre built their home on Judd Creek Hollow in 2002, they were certain that they had moved to the most beautifu…

A newley adopted dog named Brie looks up while getting a head scratch. Pet Fest organizers and mother-daughter team Linda Baumann and Megan Pfaff want people to get their pets licensed and spayed or neutered, they discourage breeding and puppy mills, and they want people to "adopt, not shop.