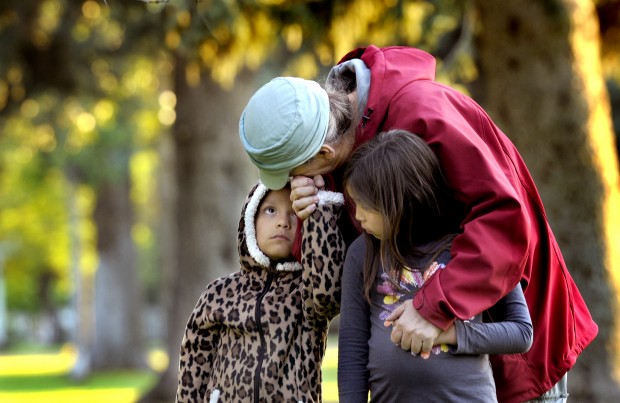 Kim Paul wipes tears from her eyes on Sept. 11, 2012, while holding the hands of her granddaughters, Nerrayah Snow, left, and Beta YellowKidney, during the Never Forget Service to mark the 11th anniversary of the terrorist attacks that killed nearly 3,000 people in New York, Washington, D.C., and Pennsylvania. 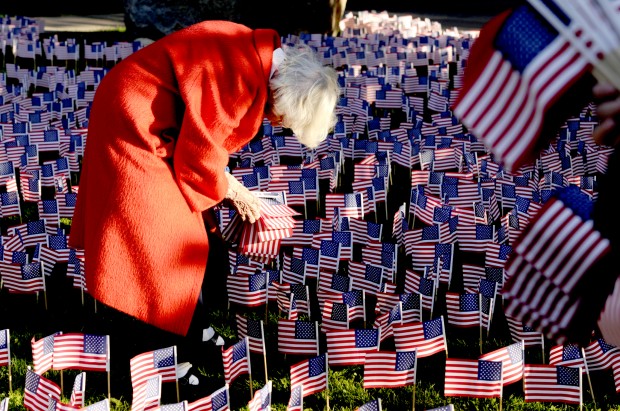 Amy Campbell, 94, helps stick American flags in the ground before the ceremony Tuesday at the Rose Memorial Garden Park. The flags represented each of the victims of 9/11 and the six people killed in an attack on the World Trade Center in 1993.

While President Barack Obama paused for a moment of silence and first responders present at ground zero won greater access to a health care fund, a handful of Montanans also gathered Tuesday night in Missoula to hold their own 9/11 commemoration.

Eleven years to the day after al-Qaida terrorists launched a series of attacks on Sept. 11 that left roughly 2,986 people dead and coaxed the U.S. into two protracted wars, roughly 50 people assembled in Memorial Rose Garden Park to remember the lives lost, the freedoms threatened, and those who served in the face of danger.

While the crowds have grown smaller in recent years, those who stood around a tight cluster of American flags expressed their sense of loss and how life has changed in the wake of 9/11.

“Our land was invaded by terrorists – an ideology trying to overcome the American spirit,” said Diane Rotering, who helped place flags before the ceremony. “Our whole way of life is at stake. We must do everything we can to uphold the principles of the United States.”

Her sentiments served as a common theme among those gathered at Tuesday night’s event, including Larry Anderson, who believes the world remains a dangerous place.

In a speech during the ceremony, Anderson suggested that many constitutional freedoms have been threatened in the wake of the attacks. Among them, he named the right to bear arms, the freedom to assemble, the freedom of speech and that of the press, among others.

“Many did not know a time before 9/11,” said Anderson. “I wonder if they know what constitutional rights they may have lost in the post-9/11 world.”

Dressed in red, white and blue and festooned with patriotic symbols, the evening’s emcee and organizer Susan Reneau said she’ll continue commemorating 9/11 for years to come.

She called the attacks a “catastrophic event” that change the nation forever, just as Pearl Harbor did for her parent’s generation 71 years ago.

“We’re still fighting terrorists,” said Reneau. “We’re not finished. I think 9/11 was a watershed day for us all. It’s still very emotional for me.”

Reneau's 94-year-old mother, Amy Campbell, couldn’t recall where she was when Japan swept into Pearl Harbor on Dec. 7, 1941. But she does remember where she was on 9/11.

Her perspective through nearly a century of American history finds similarities in the nation’s patriotic response to both events, though she feels patriotism was greater 60 years ago when her husband answered the nation’ call by joining the Marine Corps and serving in three wars.

“I think there was more real patriotism at the time of WWII,” she said. “On 9/11, my heart just bled for all the people, but also how wonderful all the people were who went back in to get those other people out.”

Missoula firefighter Tom Ziegler was friends with some of those first responders who lost their lives at ground zero in New York City.

He would have been serving with them that day, had it not been for a last-minute change in his training itinerary.

“That whole crew I would have been on was lost that day,” he said, placing the number at 27. “I worked on the ‘pile’ for two weeks. Unless you were there, you don’t understand what it was like. It was a shredder for people. Of all the friends I lost, we’ve only found six.”

This week, the federal government announced that 50 new types of cancers will be covered under a health care fund for first responders, including Ziegler’s peers who worked at ground zero.

The ruling overturns previous decisions that suggested there was little evidence to link certain cancers to the toxins found by first responders after the attacks.

John Baugh, who sang the national anthem in a deep baritone voice, recalled the morning of 9/11 when was living in Birmingham. His mother was ill and he was helping get her up.

As he thinks about the years that have passed – the years leading up to that day – he feels it’s important for America to consider its standing in the world, and how it treats other nations.

“I’ve become more grateful for the freedoms that we have,” said Baugh. “I’m more aware of how we’re perceived sometimes in foreign counties. That overlooked president (Jimmy Carter) brought a moral element into our foreign policy. I think we’re now getting it back.”

A Utah developer who is part of the team that bought the Missoulian building is apologizing for offensive messages he sent to locals over Instagram this week.

Jasmine Lori Snyder, 39, is charged with possession of meth with intent to distribute.

An online petition opposing the development has garnered over 6,440 signatures.

"Despite what you may have read on social media, my magic wand does not allow me to pick and choose who buys and sells..." mayor John Engen said on Monday.

Casey James Deschamps, 25, is accused of leading Missoula police on a high-speed chase down Brooks Street on Tuesday afternoon.

A planning meeting for a proposed $100 million redevelopment of the Missoulian site has been canceled due to insulting comments made by one of the investors in the project.

Kim Paul wipes tears from her eyes on Sept. 11, 2012, while holding the hands of her granddaughters, Nerrayah Snow, left, and Beta YellowKidney, during the Never Forget Service to mark the 11th anniversary of the terrorist attacks that killed nearly 3,000 people in New York, Washington, D.C., and Pennsylvania.

Amy Campbell, 94, helps stick American flags in the ground before the ceremony Tuesday at the Rose Memorial Garden Park. The flags represented each of the victims of 9/11 and the six people killed in an attack on the World Trade Center in 1993.