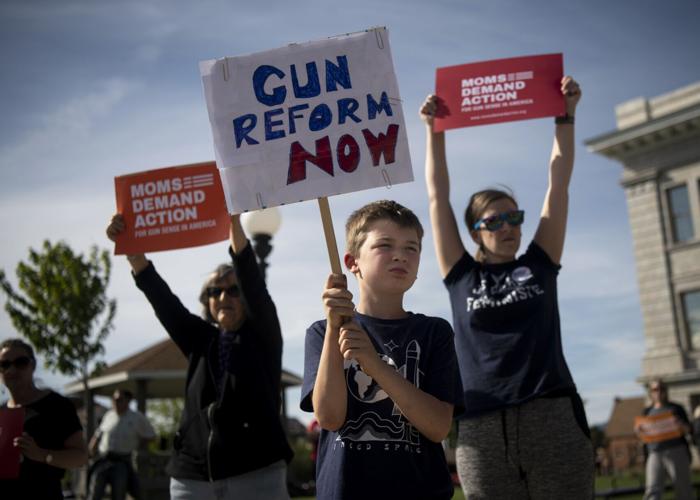 Cal Norton, middle, holds a sign in support of gun reform during a Moms Demand Action rally at the Missoula County Courthouse on Thursday evening. Norton's mother Molly, right, is a teacher at Washington Middle School. 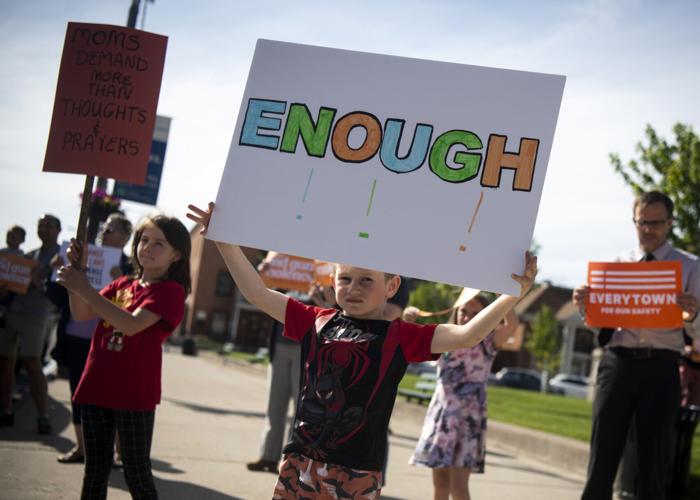 Luke Starrett of Florence attends a rally for gun reform in Missoula on Thursday evening. 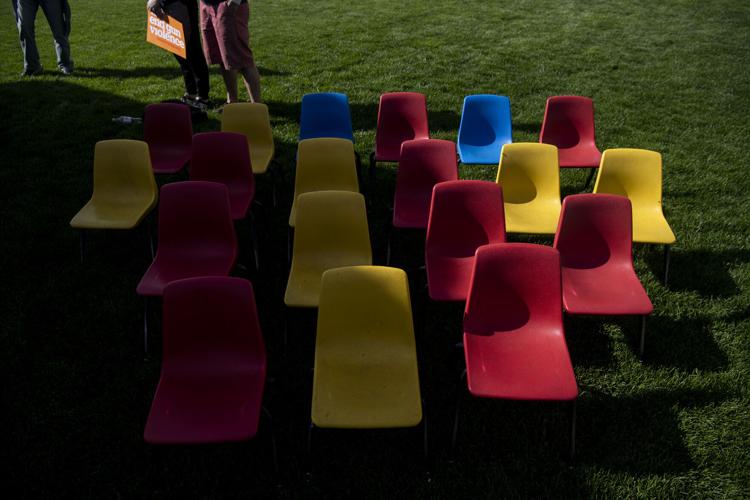 Chairs were placed on the lawn to memorialize the 19 students who lost their lives during the school shooting in Uvalde, Texas last week. 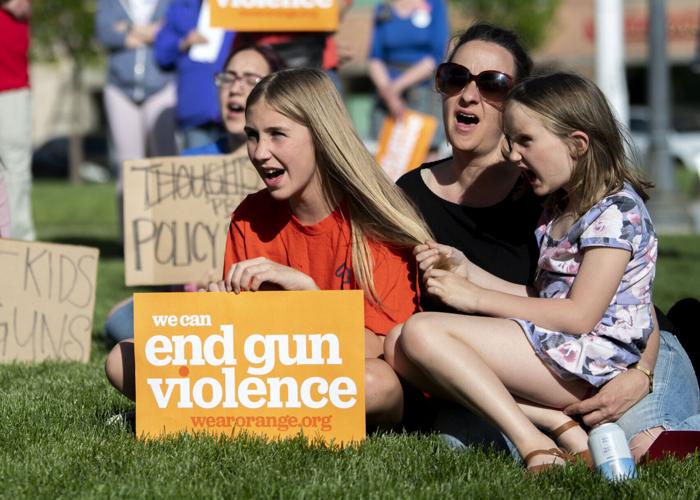 Cora Barnes, left, spoke of her hope for gun reform during the rally. 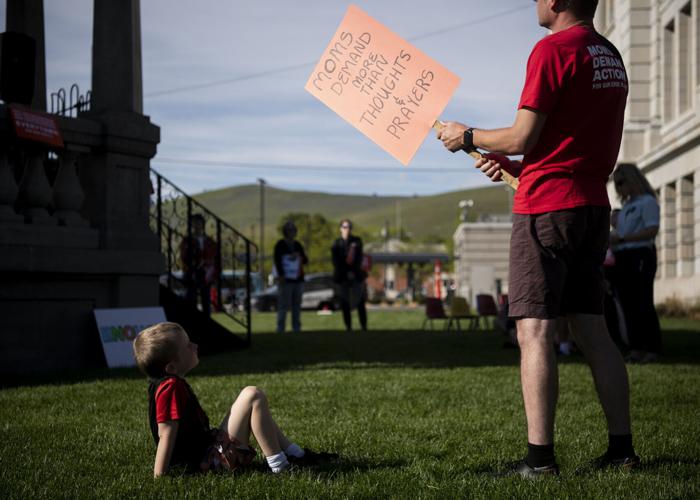 Luke Starrett looks at a sign held by his father during a rally in Missoula on Thursday. 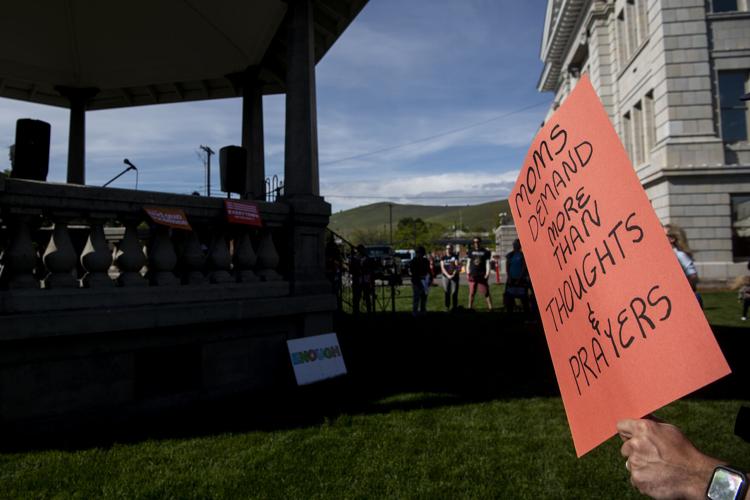 Protesters hold signs during the rally on Thursday.

Gathered next to 19 chairs representing the children killed in the Uvalde, Texas massacre, about 100 Missoulians stood side by side Thursday evening calling for comprehensive legal action to improve gun safety around Montana.

“At this point for kids in school, it isn’t ‘what if?’ or ‘just in case,’ it’s ‘when is it going to happen?’” Washington Middle School seventh grader Cora Barnes said at the event.

Over 311,000 children in the U.S. have experienced gun violence since Columbine shook the country in 1999, according to a Washington Post database.

In 2020, there were 238 deaths related to firearms in Montana, resulting in a firearm injury death rate of 20.9 per 100,000 people, according to data from the Centers for Disease Control and Prevention. The national average rate is 14.9 per 100,000 people.

Montana has seen several alleged threats of school violence in the last year, with an especially alarming influx in the days following the elementary school massacre in Texas.

Many of these incidents involved guns, with four separate suspects getting arrested. Officers responding to the incident at C.M. Russell High School determined no threat existed and no arrests were made.

Last Tuesday, a 23-year-old Helena man was arrested on suspicion of making credible threats regarding a mass shooting at Helena High School. The suspect, Logan Pallister, stated he was inspired by the Columbine shooting in 1999, according to charging documents.

In a separate February incident, 18-year-old Parker Abbott in Missoula posted threats online, saying he was inspired by Adam Lanza, the Sandy Hook shooter, according to court documents. Abbott, a Big Sky High School student, mentioned on social media he had access to his father’s firearms.

While a high volume of threats has been recently made against Montana schools, gun violence has already happened on a campus.

In 1994, 11-year-old Jeremy Bullock was killed on a school playground in Butte after a fellow student shot him.

His family created the Jeremy Bullock Memorial Trust to support students in Montana and the annual Jeremy Bullock Safe Schools Summit to provide Montana education stakeholders with information they can use to make schools safer.

According to a 2020 report from Every Town Research, roughly 75% of school shooters obtain guns from their residence or from the homes of friends and relatives.

“I’m filled with a lot of rage,” Norton said. “I feel like I’m screaming into a void.”

In the wake of Uvalde, Norton said MCPS staff got an email recommending teachers ensure students are safe. But Norton said she doesn’t feel safe at her workplace.

She also wasn’t surprised by the recent threats across Montana.

“I feel like that’s normal in America now,” Norton said.

Within the first few days of the 2021-2022 school year, three juveniles were detained following a lockdown at Hellgate High School prompted by students alleging they planned to shoot their peers. No firearms were found on the suspects or on campus and no injuries were reported.

The Missoula County Public Schools administration shared tips from the National Association of School Psychologists with teachers and parents on talking with children about gun violence, which includes making time to talk, letting a child’s questions be a guide on how much information to provide, and reassuring children that they are safe.

“Please remember that all of our schools have emergency plans and procedures in place, and that routine drills take place in each school throughout the school year,” MCPS Superintendent Rob Watson wrote in the email. "School safety is our top priority, and we work continuously to provide the safest environment possible for all students and employees."

Moms Demand Action is a national group with over 8 million members. At the top of the group's pleas is the need for safe gun storage to prevent children getting hold of firearms.

“Nobody should argue with the importance of the need to secure firearms responsibly,” Henry said in an interview with the Missoulian. “Firearms are a right through the Second Amendment, but they’re also a responsibility if you are an ethical and responsible gun owner.”

From 2010 to 2019 firearms were used in 63% of all suicides in Montana, and a majority (82%) of firearms used in youth suicides in the state belonged to a parent, according to the Lewis and Clark Suicide Prevention Coalition. Only 7.5% of suicides in Montana involved prescription medication in 2019.

The National Alliance for Suicide Prevention says that many suicide attempts take place during a short-term crisis and that putting time and distance between lethal means and those in crisis can prevent suicide.

“We feel like there needs to be a very, very harsh review of how assault weapons are manufactured and how they are marketed,” Henry said. “The marketing of firearms is pretty suspect.”

She’d also like to see better regulation of assault weapons.

“Again and again, it's typically these high-capacity, high magazine-volume, assault weapons in a variety of forms that are used in mass shootings,” Henry said. “For the sheer reason that they can fire so many rounds in such a quick instance.”

The organization pointed to red flag laws and background checks as other vital parts in improving gun safety around the country.

He called for Montanans to put the heat on the Legislature, especially the 68th Montana legislative session set to commence this January.

A district court judge in Lewis and Clark County struck down House Bill 102 — otherwise known as the “campus carry” bill — in December, citing the violations of the Montana Board of Regents’ constitutional authority.

Last spring, the Regents voted unanimously for the Office of the Commissioner of Higher Education to seek a swift judicial review of the bill following overwhelming public comment in opposition.

The bill expanded where firearms can be and would allow students on college campuses who meet safety certifications to carry concealed firearms without a permit by removing the Regents’ ability to enforce restrictions for guns carried on campuses.

The bill was signed into law by Gov. Greg Gianforte in February 2021 and was expected to take effect on campuses the following June.

During a public listening session held prior to the regents' decision, 75 people spoke. For every comment that offered support for the policy to allow guns on campus, there were nearly 11 in opposition.

In the most recent legislative session, Sen. Carl Glimm, R-Kila, wrote a bill that Gianforte signed adding language to state law to clarify that expulsion for bringing a firearm to school is discretionary for school boards.

While the bill was in committee, no one testified in favor of the bill and only Lance Melton with the Montana School Boards Association spoke in opposition. Melton raised issues with the bill in regard to how it relates to the federal Gun-Free Schools Act.

Glimm drafted the bill after a Columbia Falls student faced expulsion after accidentally bringing a hunting rifle to school in the trunk of her car.

Thursday evening, President Joe Biden addressed the nation to express his sympathies for the lives lost in Uvalde, and called for Congress to pass “common sense gun laws."

He noted that in the 10 years since he visited Sandy Hook Elementary School in Connecticut after 26 people were killed by a gunman, there have been more than 900 incidents of gunfire reported on school grounds.

“We can’t and won’t prevent every tragedy, but we know they (gun control laws) work and have a positive impact,” Biden said. “When we passed the assault weapons ban, mass shootings went down. When the law expired, mass shootings tripled.”

A young teen is in custody after Columbia Fall police arrested him on suspicion of making threats against Columbia Falls Junior High School and its student body.

Two individuals are in custody after two separate threats of violence were made at two schools in western Montana on Thursday.

Ryker Webb was missing for over 24 hours – he was reported missing to the Lincoln County Sheriff’s Office on Friday afternoon around 4:53 p.m.

When she first started at Stevensville High School, Addy Rodolph was a quiet and shy freshman. By her senior year, she grew into a confident leader.

MCPS to recommend scaling back Spanish instruction at Paxson Elementary

Many parents are dismayed by the decision and have spoken out in submitted public comment to the school board, during public comment at meetings and in a petition signed by over 200 people online.

Missoula County Public Schools operated the online academy for students of all ages for two years amid the tumultuous COVID pandemic.

Next year, the school will not operate in the immersion model where subjects like science and social studies are taught in Spanish. The school will still offer a Spanish language class.

Cal Norton, middle, holds a sign in support of gun reform during a Moms Demand Action rally at the Missoula County Courthouse on Thursday evening. Norton's mother Molly, right, is a teacher at Washington Middle School.

Luke Starrett of Florence attends a rally for gun reform in Missoula on Thursday evening.

Chairs were placed on the lawn to memorialize the 19 students who lost their lives during the school shooting in Uvalde, Texas last week.

Cora Barnes, left, spoke of her hope for gun reform during the rally.

Luke Starrett looks at a sign held by his father during a rally in Missoula on Thursday.

Protesters hold signs during the rally on Thursday.