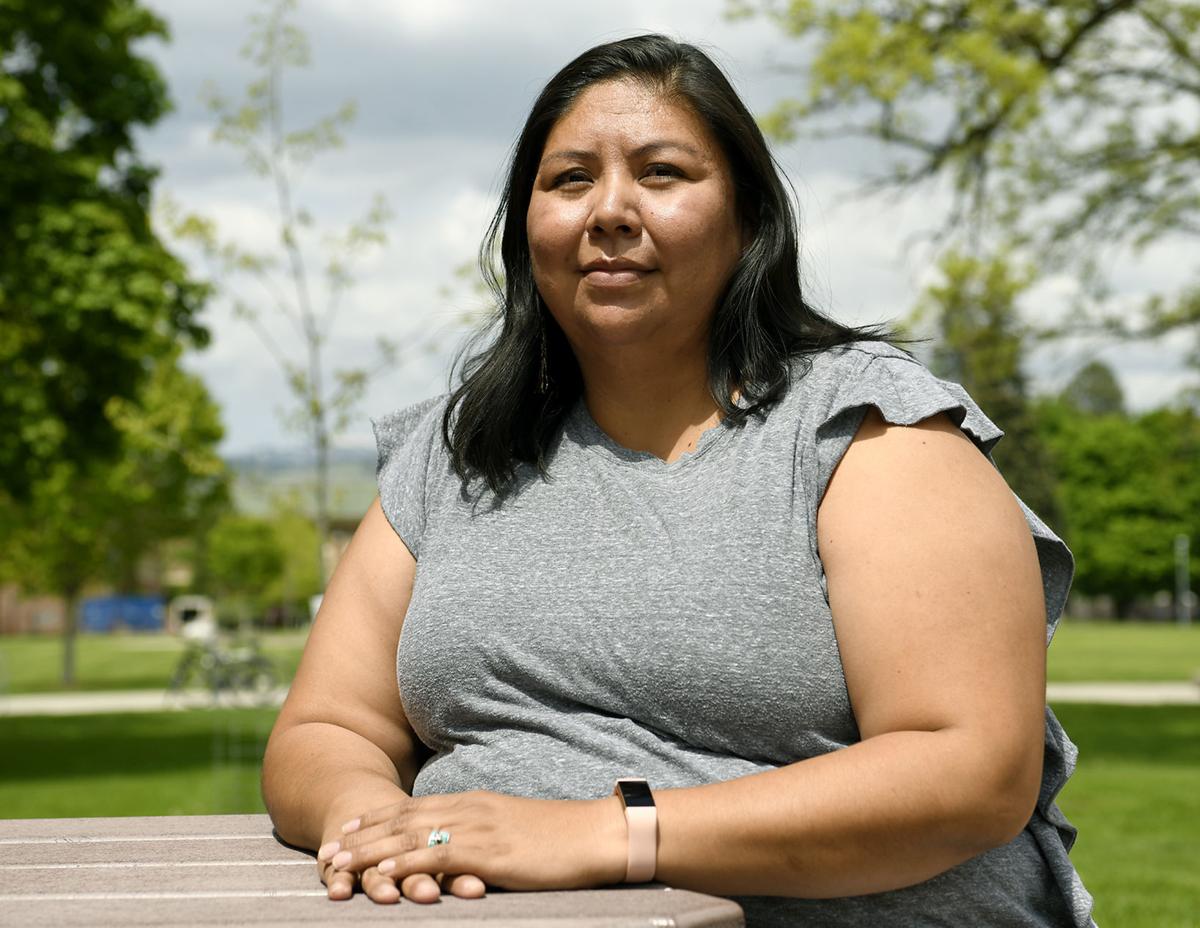 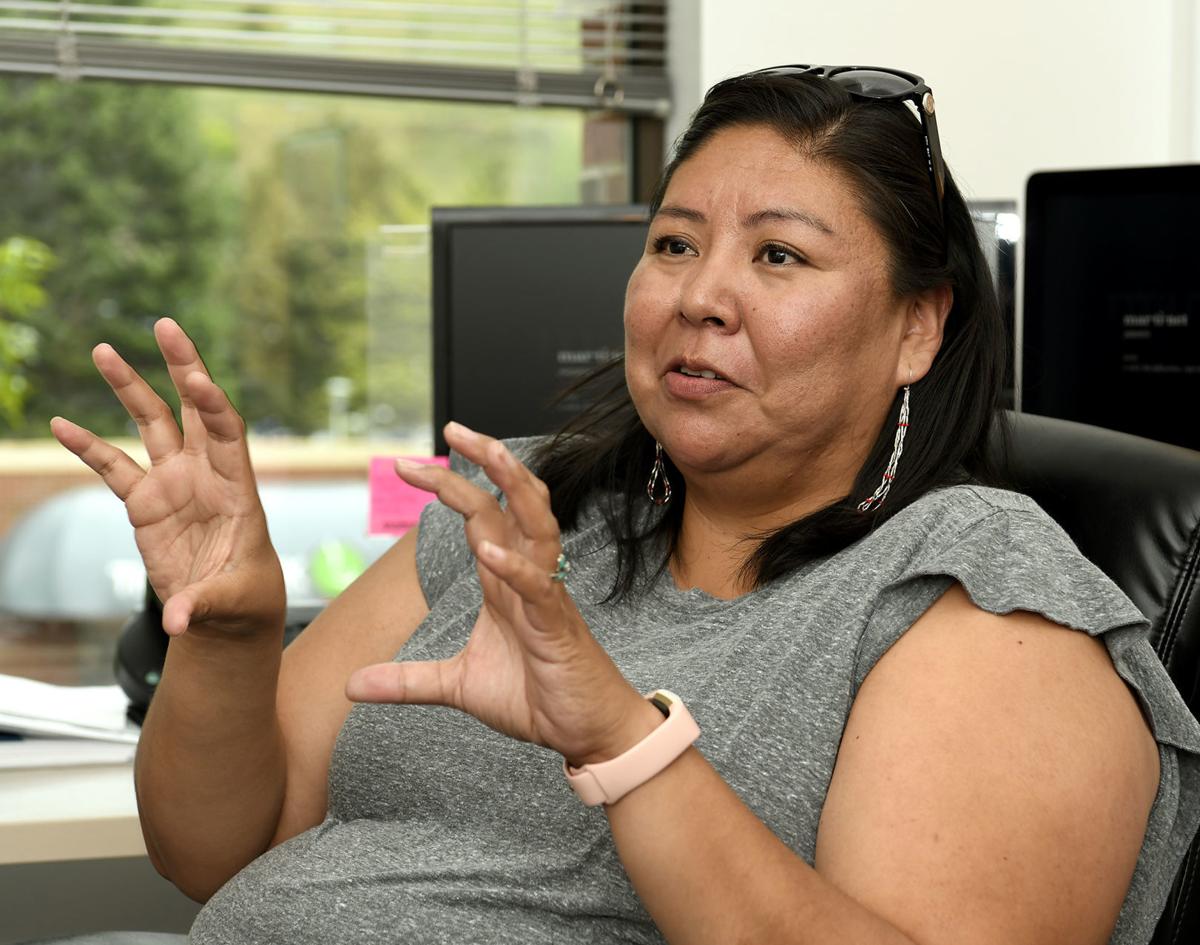 Old Person grew up in Starr School outside Browning, and while she moved back briefly after earning an undergraduate degree at UM, she said she feels she's making an impact for native students on campus.

It’s not easy to navigate the Skaggs Building on the University of Montana campus. The maps on the walls do little to help distinguish the maze of hallways or locate rooms that don’t seem to be numbered in any particular order.

It’s fitting that this is where Wilena Old Person’s office is located.

For her entire career, Old Person has been a leader in helping others guide and navigate conversations about diversity, equity and education.

In every one of her roles, Old Person has been a voice for American Indians and underrepresented students. She’s the mother of four boys. She’s a student working on her master’s thesis. But if there’s one identity that comes to mind when people think of Old Person, it’s her role as a leader.

“Wilena just has this natural ability to lead with grace and collaboration and wisdom and vision,” said Heidi Wallace, the executive director of Empower MT, an organization that develops youth and adult leaders to correct systemic inequalities.

Old Person and Wallace got to know each other when Old Person served on the board of directors for Empower MT and volunteered as one of their community trainers. During her time at Empower MT, Old Person led cultural competency training for state agencies as well as prejudice reduction and violence prevention training in schools throughout the state.

“I am proudly Native American and that does come with challenges that are not positive,” Old Person said. “I have experienced insensitive comments, microaggressions, racism, etc., and as a mother, I wanted to become a trainer to help make my community a more inclusive space for not only myself but for my children.”

Although Old Person is known for work on diversity issues and advocating for Native populations, her leadership extends throughout the community.

“She was a real leader in the cohort on a variety of levels in terms of our discussions on women’s leadership, our discussion of campus leadership and on community leadership,” said Deena Mansour, the founding director of the inaugural Women’s Leadership Initiative cohort at UM.

Old Person was among a group of women in the first year of the program, which is geared toward building women as leaders.

“She has a great combination of analytics but also using her heart to approach issues, and that’s something that’s incredibly valuable in our community,” Mansour said.

Earlier this year, Old Person said she had to take a step back from a few volunteer positions to focus on her masters. She said she put her all into everything she does and she felt worn out.

“There’s a thing called diversity fatigue and I think that’s how I felt,” Old Person said. “I pushed so hard but I had to take a step back because I felt like I couldn’t make an impact.”

Old Person said burnout among faculty and students of color is common.

“They’re stretched so thin because there’s only a few of them and they’re asked to be on all these other committees,” she said.

However tired she may be, Old Person doesn’t give up. As the granddaughter of Blackfeet Chief Earl Old Person, leadership and resilience are in her blood.

“I feel like people were like, ‘Ugh, she’s just going to talk about diversity again,’” Old Person said. “But to me, I feel like if I don’t, who will?"

In the fall of 2018, just after Old Person was taking a step back from a couple of volunteer positions, she joined the Missoula County Public Schools elementary boundary study committee to help the district redraw attendance boundaries to reduce overcrowding at schools.

She said she decided to join after seeing a lack of involvement with communities of color.

In talking with community members throughout the process, Old Person noticed disparities in the people who were able to take the time to attend meetings and be heavily involved in the process. So she decided to run for the school board.

In May, Old Person was elected and sworn in as a member of the MCPS Board of Trustees.

As a mother with four sons in the district, she said she wanted to bring her cultural lens to the board and be a voice for parents of Native students.

“She is so passionate about diversity, equity and inclusion and I really believe that is so important for our school district to be a leader in when we’re thinking about how to be powerful 21st century teachers and learners,” Wallace said, adding that Old Person’s abilities as a collaborator will not only help with teachers and board members, but also community partners.

Old Person said she also wants to make sure her children have opportunities she didn’t have.

Old Person grew up in Starr School and attended Browning High School on the Blackfeet Reservation, where she pointed out differences in access to educational programs. In Missoula, her oldest son plays in a band at Sentinel, but she said Browning is still trying to find funding for a band.

Old Person moved back to Starr School briefly after earning her undergraduate degree from UM, but she said her heart was in Missoula.

“A lot of people talk about how they wanted to go back and make an impact on their reservation, and I did,” she said. “But I wasn’t there. I wanted to be here.”

She moved back to Missoula and married Jason Plain Feather on the 50-yard line of the Washington-Grizzly Stadium.

“I feel like I’m making my impact here,” Old Person said. “For my people, for my culture, for Natives here on this campus by doing what I’m doing now.”

Salena Hill, Old Person’s sister-in-law who worked with her at UM, said she’s seen a change in Old Person’s leadership over the years.

“The conversations we have now are so much different than when she was brand-new, starting out,” Hill said. “She knows the ins and outs of the system and has a perspective of how they can work better.”

In Old Person’s current role as a program coordinator for the Health Careers Opportunity Program at the College of Health Professions and Biomedical Sciences, she helps assist pre-health students and ensure they’re successful.

She works especially with students who come from disadvantaged backgrounds, such as first-generation college students or those who were raised in rural areas.

One of her current students came from a high school of 30 kids and didn’t have the opportunity to take classes like advanced chemistry or advanced biology.

Others are first-generation students whoo might not have parents to go to for advice, or minority students who are intimidated to be the only person of color in advanced classes at UM.

“My staff here, that’s what we’re trained to do is to help those students and let them know that there is a safe place to come to,” she said.

Old Person has helped a lot of students along the way who have said thank you with gifts such as the beaded earrings that dangle just above her shoulders.

Although she has an affinity for earrings, Old Person said she feels the most fulfillment from attending graduation.

“That’s the best part, when those students are in cap and gown and they know they’ve done it,” she said.

After months of planning and 59 public meetings, Missoula County Public Schools trustees have finally voted on several changes to elementary a…

Cox said being forced to grapple with Montana's overwhelming whiteness helped solidify her desire to work in social activism and racial equity.

Old Person grew up in Starr School outside Browning, and while she moved back briefly after earning an undergraduate degree at UM, she said she feels she's making an impact for native students on campus.