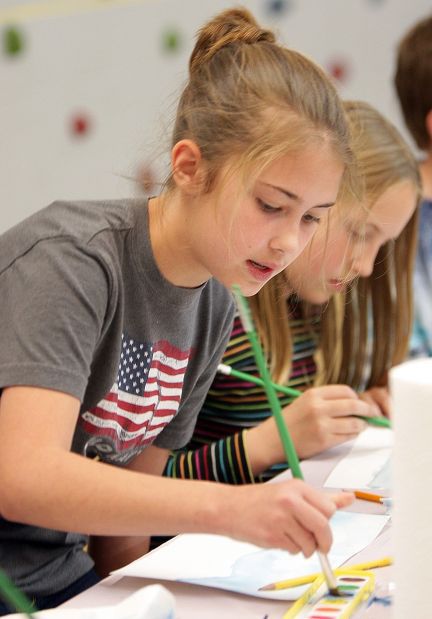 McKinley Student Olivia Black works on her painting at an after school art class April 29, 2014, in Billings.

The approval was the last step of a multi-year process to revise current standards, which are educational outcomes school districts are required to address. Individual school districts set their curriculum — how they teach the standards, what materials they use and any areas of emphasis or additional subjects covered.

The standards for health and P.E. were last updated in 1999, while arts standards were updated in 2000. The Montana Office of Public Instruction began the process of creating new standards in 2015, holding a series of meetings with school officials and teachers and public input meetings.

The office also has to conduct an economic impact statement, which surveys school districts on whether implementing the standards would create a financial burden for schools.

About 60 percent of respondents said they could meet the standards with existing resources for all the subject areas. About 20 percent ofsaid their districts didn't have the staff to adapt to the new standards, but many of those districts already face staffing issues under the current standards.

The OPI has designated $27,000 for health and P.E. teacher training and standards implementation and about $53,000 for art.

The standards are generally considered more rigorous than the old standards and have provisions to comply with Indian Education For All, a constitutional requirement that schools teach Native American culture.

The health standards include an increased emphasis on emotional health; previous standards only mention emotional and mental health once each, both in glossary definitions of other terms. The standards also have language that explicitly talks about tracking personal health and fitness.

Health and physical education standards adopted by the Board of Public Education on July 14, 2015.

New arts standards adopted by the Board of Public Education on July 14, 2016.

The public is invited to discuss updates to Missoula County Public Schools' science and health enhancement curricula this week.

Montana Board of Regents discusses effectiveness of 'performance funding'

If a university doesn't graduate as many students as it could, it might not get all the money that's on the table.

McKinley Student Olivia Black works on her painting at an after school art class April 29, 2014, in Billings.