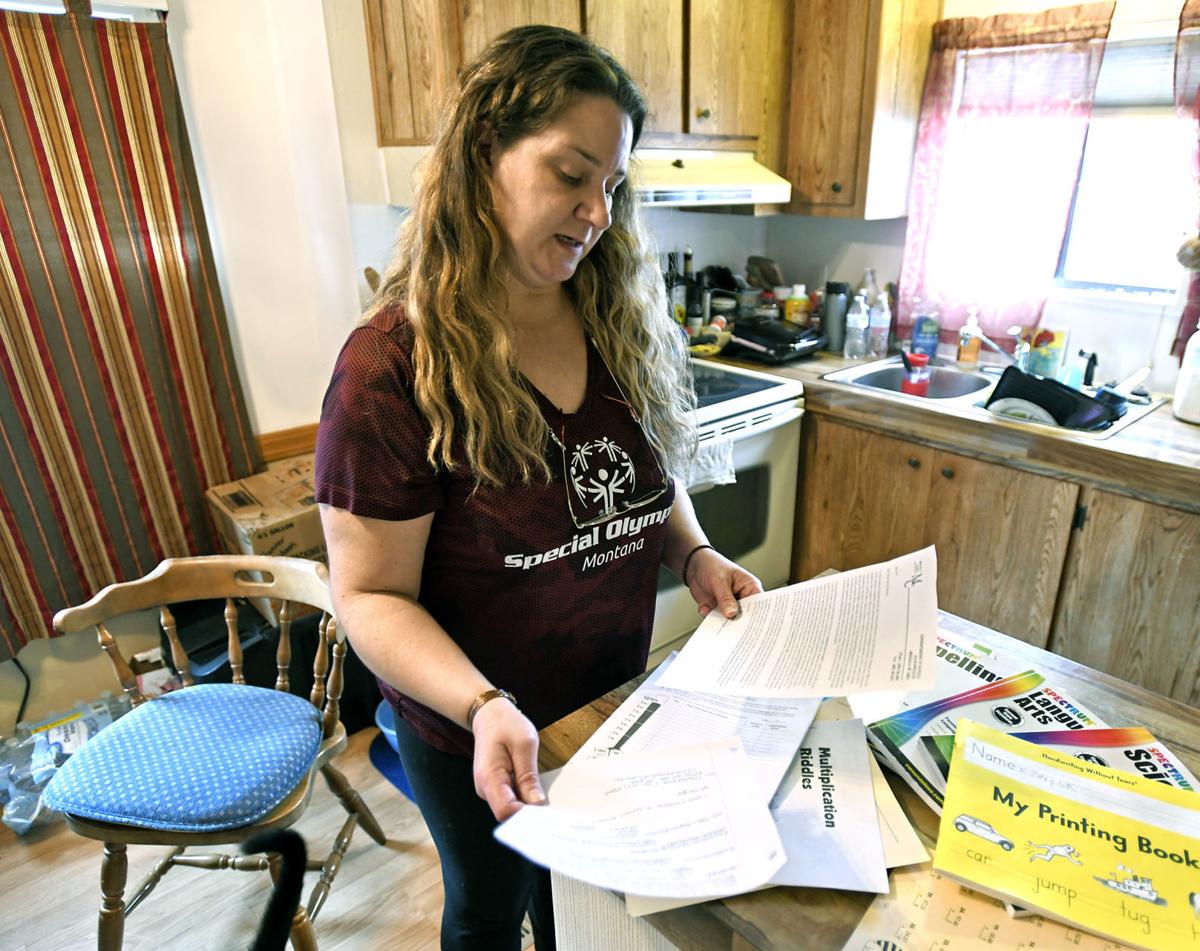 Melanie Hawk of Missoula looks through some of the materials she uses to home-school her 10-year-old son Hunter. Montana is one of 15 states with no state agency that regulates or oversees home schools, and many proponents of home schooling are satisfied with that system. 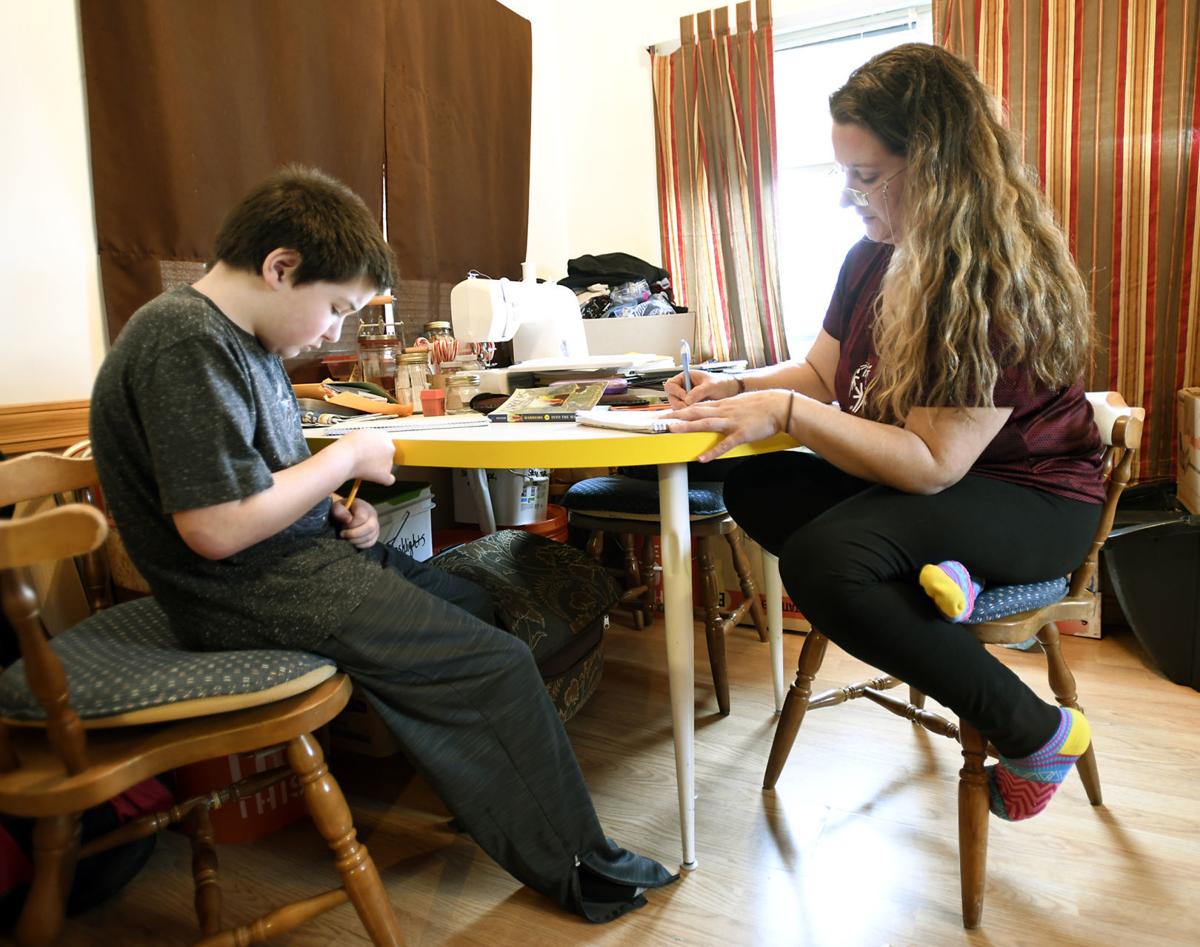 Melanie Hawk said she and her son Hunter often work on his lessons at their kitchen table.

Melanie Hawk of Missoula looks through some of the materials she uses to home-school her 10-year-old son Hunter. Montana is one of 15 states with no state agency that regulates or oversees home schools, and many proponents of home schooling are satisfied with that system.

Melanie Hawk said she and her son Hunter often work on his lessons at their kitchen table.

In California, the recent discovery of 13 siblings trapped in a home by abusive parents who claimed to be home-schooling them has prompted lawmakers to rethink how the state oversees home schools.

There, parents are required only to send the local superintendent an annual notice of their intent to home-school. No state agency regulates or oversees home schools in California.

Fourteen other states have the same minimal level of oversight, including Montana.

A 1991 law passed in the Montana Legislature gave parents the right to have control over their children’s education essentially without government interference. Parents who want to home-school their children are not required to have a teaching license or to have a certain level of education, such as a high school diploma.

Families have freedom to design the curriculum, philosophy, schedule and assessments as they choose. Regular standardized testing is not required unless a student leaves the home school to enroll in public school.

Montana’s lack of regulation has made it an ideal place for parents who want to home-school, even prompting families to move here from out of state.

Only 10 states have less regulation, including Idaho, which requires no notice from parents about their intent to home-school. Washington is one of several states that requires regular assessment of students, and parents are required to meet one of four qualifications for teaching.

In North Dakota, students are required to take a standardized test every other year, and if they score below the 30th percentile, they are assessed for learning problems by a multidisciplinary assessment team.

Lipkind said she doesn’t require the last one. Many home-school families never come to her office, she said, opting instead to mail or fax their annual letters.

In Missoula County, 254 students were home-schooled in 2017, about 2 percent of those in public school.

Following the discovery of the Turpin children in California, the Coalition for Responsible Home Education, a national organization founded by home-school alumni that provides public policy guidance and advocacy, released a statement.

In it, the organization recommended states require annual academic assessments of home-schooled students by a licensed professional, and regular doctor visits. Rachel Coleman, the CRHE executive director, said in the statement that it’s critical for home-schooled students to have regular contact with mandated reporters, meaning people who are legally required to report suspected or observed abuse, like doctors or counselors.

“While children home-schooled in positive, healthy environments typically have regular contact with mandatory reporters, absent any law to the contrary children like the Turpins may be completely isolated,” Coleman said in the statement.

Over the seven years Lipkind has been Superintendent, Montana’s home-school laws have remained the same, though there have been several failed attempts at instituting more oversight.

“There’s been a bill or two attempted to get through the Legislature that failed on the power of the home-school lobby,” Lipkind said.

She did not say whether her office had an opinion on increasing regulations of home schools, emphasizing that there are “many fantastic home-school families” who keep their kids out of public schools for a variety of personal reasons.

“And then there's families who we don't know are out there,” Lipkind added.

“Every home-school family is required to notify the superintendent in the county in which they reside, but we have no way of regulating that,” she said.

The bill would have, among other things, required home schools to register with their local school district, required qualifications for parents who wished to home-school, and required that students be tested in fourth, eighth and 11th grades.

The bill failed. Steve White, legislative liaison for Montana Coalition of Home Educators, fought against it in favor of parental rights. When asked whether he thinks home-school students should be tested every few years to ensure they’re meeting national standards, White said no.

“There were some bills that asked that same question and we fought very strongly against that,” he said. “Because once again, it's the parents' decision as to the academic success of their student.”

White said annual inspections of home schools would violate parental rights, saying that argument could be used to support inspections of every home, regardless of whether parents home-school or not.

“You have one situation in California and you’re going to turn everything upside-down and pass new laws because of one family who wasn't even legitimately home-schooling their children?” he asked. “We’re satisfied with the laws the way they are.”

Annie Graham, the executive director of eNDVR, a home-school cooperative learning space and resource center in Missoula, said Montana's home-school laws give parents so much freedom that they often search for more support, though that need isn't best met by the state.

"There's not a lot of oversight and it allows parents to educate their children in the way that they think is correct," she said. "I think it's unfortunate what happened in California, and things like that can happen in any system."

Graham's home-school cooperative supports parents who feel like they need extra structure, she said. The parents she works with are trying to go "above and beyond" for their kids, and the talk of stricter laws can feel like confirmation that home schooling isn't recognized as a legitimate form of education, Graham said.

Melanie Hawk recently pulled her 10-year-old son Hunter out of public school for the second time. Hunter has autism, and Hawk said she feels she can better meet his learning needs at home, where they have more freedom to explore and travel and use hands-on teaching techniques.

Hawk studied elementary education and special education many years ago, she said, though she didn't finish her final year of school. She said Montana's home-school standards are very loose, and the freedom can be both exciting and difficult for a parent. Like Graham, she said parents would benefit from more support, but not in the form of mandatory testing or state regulation.

"I think parents need to be welcomed into trainings," Hawk said, suggesting that the Office of Public Instruction offer training for home-school parents. "I would love for them to set up trainings for those families, and make them free. Sure, on the website you can go and you can download all the content standards and what that means, but that doesn't mean all the parents know and understand."

Hawk and her son worked together to choose classes for him at eNDVR that she can't offer at home, like engineering and intro to tech robotics. The home- school coop also gives him a chance to socialize with other kids.

"It’d be nice to have support from the state, but I don't like the idea of penalties. But I think if there was support there, parents would jump on it. I want the best for my kids, and I think, really in general, all parents do."