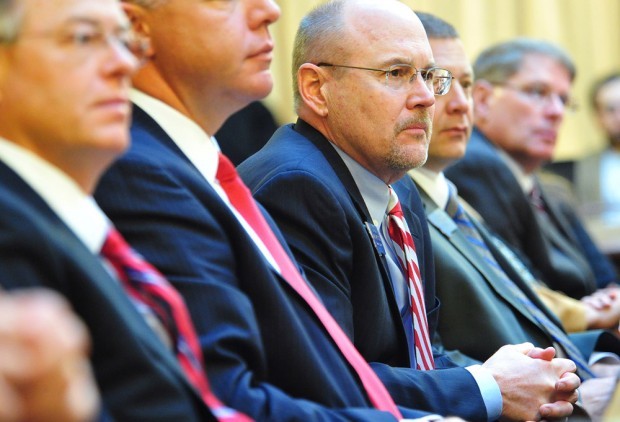 State Sen. Art Wittich, R-Bozeman, waits to hear the results of a vote for majority leader during Senate Republicans' caucus in November 2012. Wittich was elected to the post. 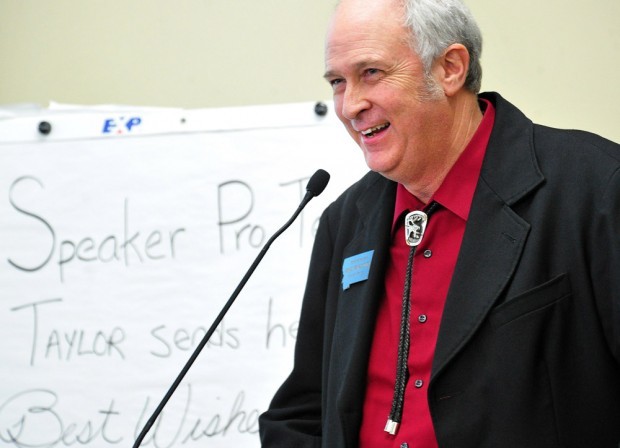 Essmann unseated current Senate President Jim Peterson of Buffalo by a 15-14 vote in a secret ballot, according to Senate sources.

“We work well together when we work as a coalition,” Essmann told his colleagues. “We have an opportunity with a fresh start with a new governor.”

The Republican Senate caucus, with 29 members, is one of four party caucuses that met in Helena on Wednesday to choose party leadership for the 2013 Legislature, which convenes Jan. 7.

Rep. Mark Blasdel, R-Somers, ran without opposition to become the next speaker of the Montana House, the highest-ranking job in that body.

But the biggest news of the day was in the Senate Republican caucus, where the expected winners were upset by candidates seen as more outspokenly conservative. The majority caucus in the Senate also is generally seen as the most powerful body within the Legislature, more able to control the session’s agenda and final result.

There was little public explanation for the change in the Senate majority leaders. Peterson seemed crestfallen by the outcome, but wouldn’t comment, referring reporters to Essmann.

In nominating Essmann for Senate president, Sen. Dave Lewis, R-Helena, suggested it was time for a change.

“I think the 800-pound gorilla in the room is we won 29 Senate seats, we control the Public Service Commission, yet we lost important statewide races,” Lewis said. “And my feeling is that we need to be much more clear about what we stand for as Republicans, how in fact we differ from the Democrats in our beliefs.”

“And I think it’s important to, in effect, sharpen our message going into this next session,” Lewis said.

Wittich said before the vote that he believes competition for leadership posts is good.

“I believe we need new leadership and a new approach on a unified leadership team, so we seriously take on constitutional duties this session,” Wittich said.

The new leaders will be working with incoming Democratic Gov. Steve Bullock, who replaces Gov. Brian Schweitzer, a Democrat who fought often with the GOP-controlled Legislature in 2011 and vetoed a record 79 bills.

“I’m glad that everybody is here and are as ready to get to work as I am,” he said. “If they focus on what Montana voters sent us here to do, they’ll definitely find a governor willing to work with them.”

Blasdel said he hopes legislative Republicans will have a “positive relationship with the governor,” but that Republicans also believe that voters showed last week that they favor Republican ideals.

He noted that voters overwhelmingly approved three referendums that the Republican-led 2011 Legislature placed on the Nov. 6 ballot, including at least one that had been vetoed by Gov. Schweitzer, and a more restrictive medical marijuana law.

“That means that people believe in our values and in our beliefs,” he said. “We didn’t punt on the hard issues; we tackled them. And we need to do that again this session.”

The approved referenda require parental notification for minors getting abortions, require the state to deny certain services to “illegal aliens,” and prohibit the state or federal government from requiring the purchase of health insurance.

Vance and Blasdel said Republicans are ready to take on issues like the state’s financially strapped pension system, the growth of state government and barriers to economic expansion.

Hunter, the House Democratic leader, said they’ll be focusing on jobs and the economy as well, and that there may be room for agreement between the parties on funding infrastructure and other development measures.

Sesso and Hunter also said Democrats will focus on funding education, both public schools and colleges, and implementing the federal health reform law.

Democrats said they also will fight for public access to public lands, rivers and streams, and fight any efforts to privatize hunting and fishing in Montana.

HELENA – Incoming members of the 2013 Montana Legislature elected their party leaders Wednesday, in meetings at the Capitol. Here are the officers chosen for state Senate and House:

State Sen. Art Wittich, R-Bozeman, waits to hear the results of a vote for majority leader during Senate Republicans' caucus in November 2012. Wittich was elected to the post.