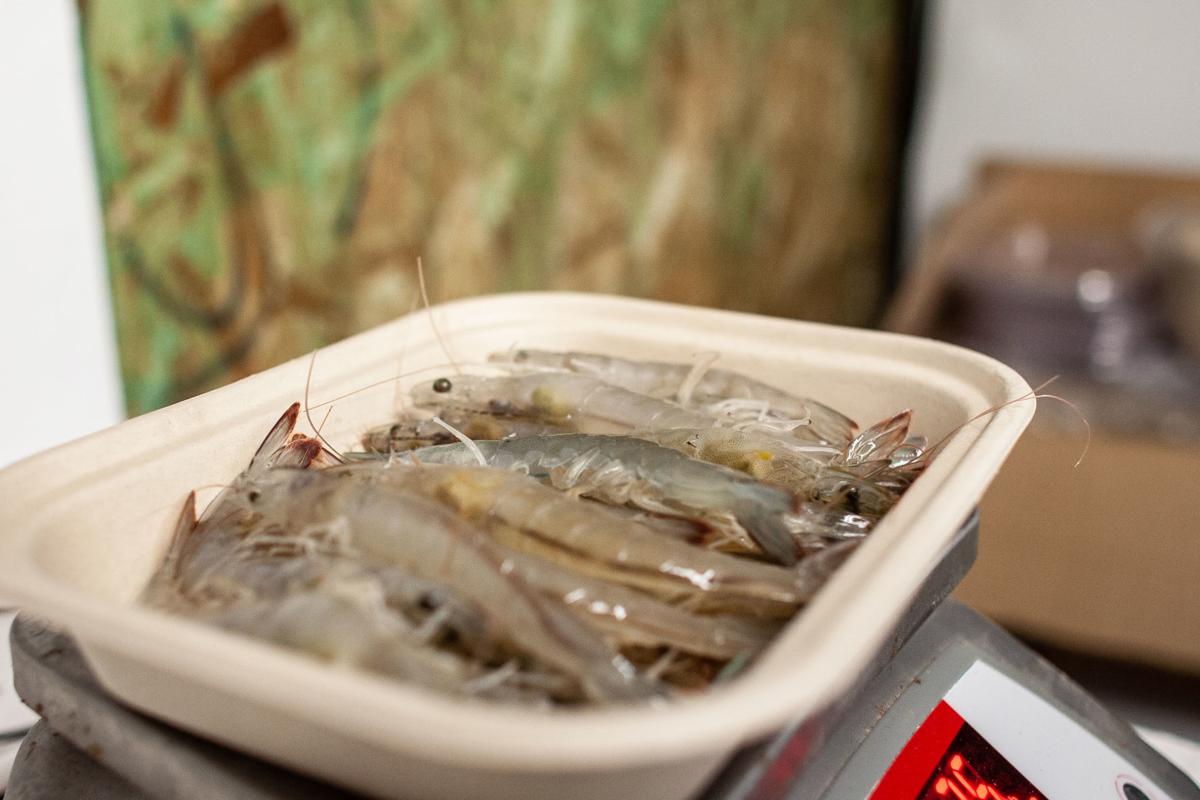 A pound of the largest shrimp sit on the scale in Jim Vaughan's shrimp barn. Vaughan weighs the packaged shrimp to ensure that they are as close to a pound as possible. He plans to sell them alive, but on-ice, to ensure freshness and compliance with food codes. 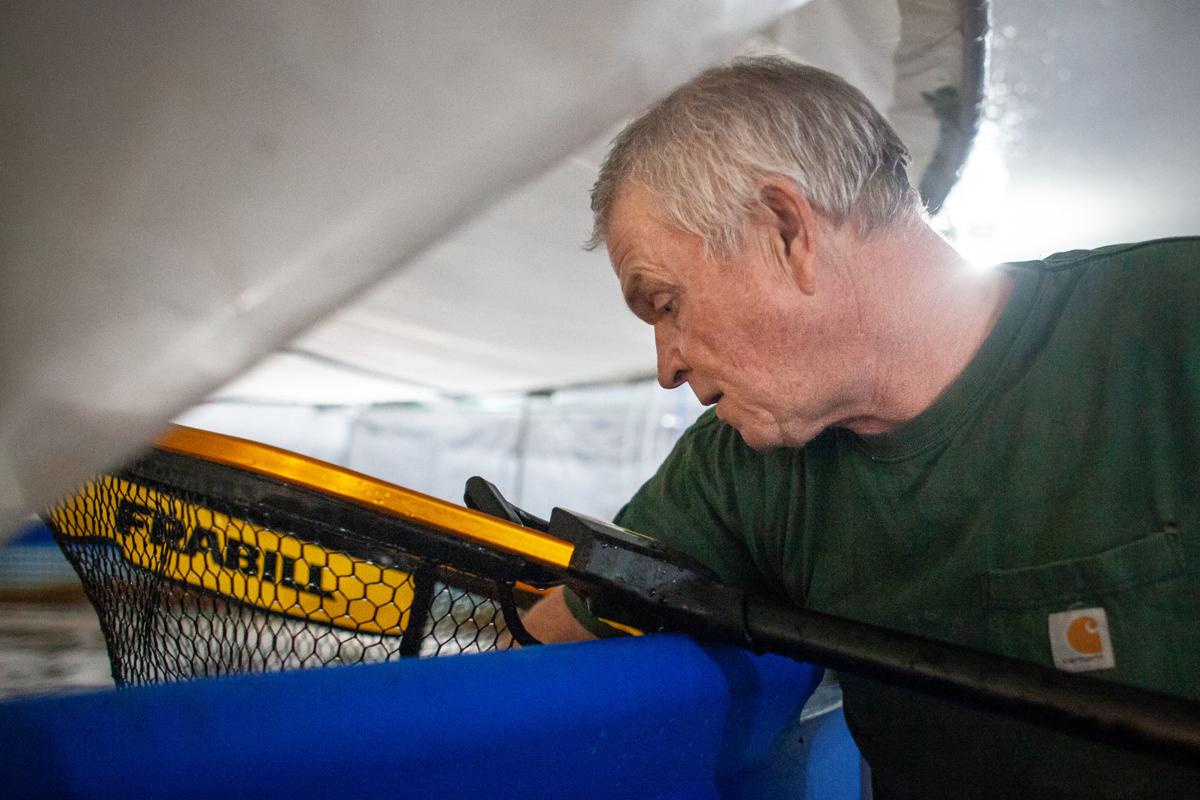 Owner of Mission Valley Shrimp, Jim Vaughan, fishes his largest, most mature shrimp out of their pool in his shrimp barn on Friday morning. Vaughan is raising white pacific salt-water shrimp indoors on his property near Charlo on Highway 212. 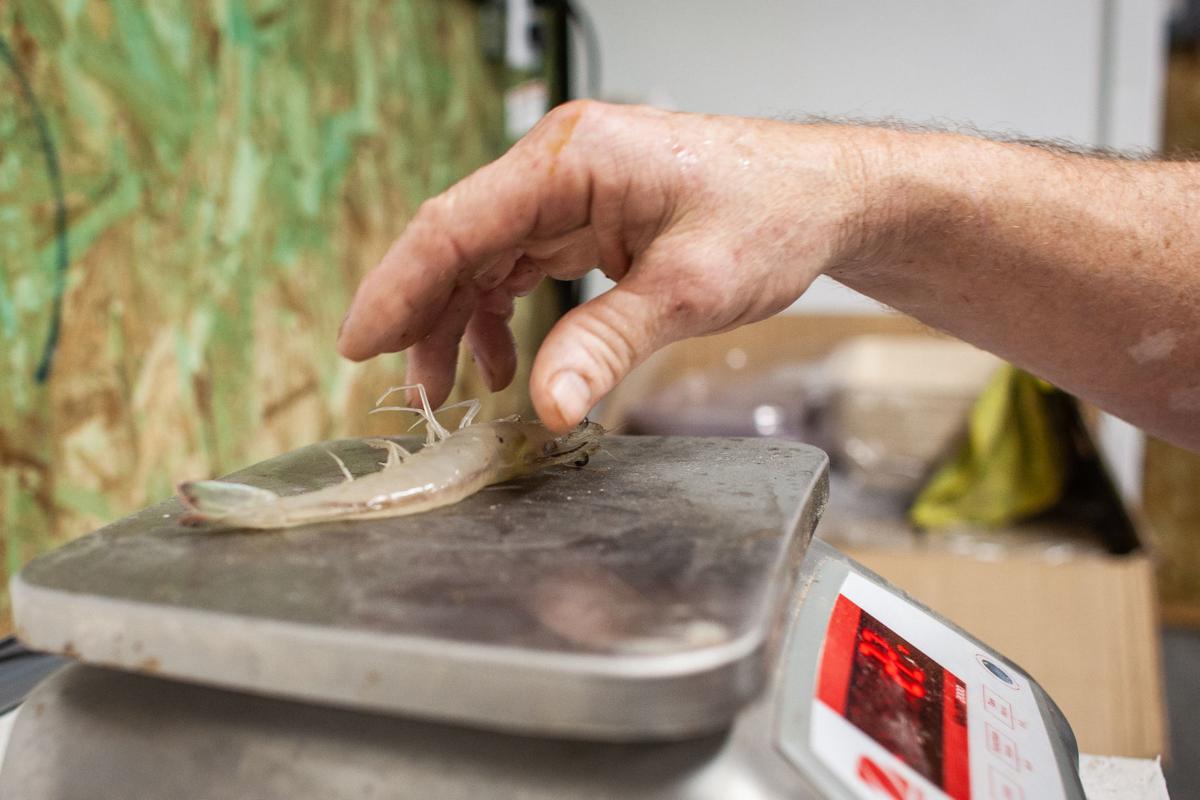 Jim Vaughan places one of his largest, most mature shrimp on the scale moments after fishing it from the pool in his barn. The large shrimp indicate low stress, proper nutrition, and a healthy environment.

A pound of the largest shrimp sit on the scale in Jim Vaughan's shrimp barn. Vaughan weighs the packaged shrimp to ensure that they are as close to a pound as possible. He plans to sell them alive, but on-ice, to ensure freshness and compliance with food codes.

Owner of Mission Valley Shrimp, Jim Vaughan, fishes his largest, most mature shrimp out of their pool in his shrimp barn on Friday morning. Vaughan is raising white pacific salt-water shrimp indoors on his property near Charlo on Highway 212.

Jim Vaughan places one of his largest, most mature shrimp on the scale moments after fishing it from the pool in his barn. The large shrimp indicate low stress, proper nutrition, and a healthy environment.

CHARLO — It’s hard to believe unless you see it with your own eyes.

“It’s kind of an innovative business,” explained Jim Vaughan, dipping a net into one of the giant tanks to scoop out a dozen carrot-size flopping shrimp. “That’s what’s neat about it, is it’s kind of been a learning experience.”

Long story short, Vaughan was born and raised on a farm but had zero experience in aquaculture. However, he has a brother who learned about shrimp farming while working as a miner in Indonesia.

“On the airplane ride home, my brother got to talking with some other guys and decided he was going to start his own farm, Cowboy Shrimp Farm, in Idaho,” Vaughan recalled. “He started selling shrimp in Idaho."

That particular business' logo features a cowboy riding a giant shrimp, in case you were wondering.

"I thought it was totally nuts and a dumb idea," Vaughan recalled. "But I got back home and, the beauty of the Internet, and I started Googling and researching and found out it was a pretty cool thing with no waste to get rid of."

Then, Vaughan said his brother got a divorce and had to go back into the mining industry.

So the shrimp were either going to die or get shipped to Montana with a new lease on life.

“I had a big hurry,” Vaughan recalled. “I thought I had six months to build everything in there, but he said, 'In three weeks you gotta be ready.' So this is the first year in my life I haven’t caught a fish or shot a gun.”

Vaughan is an energetic, fast-paced talker and hard worker, and hurry he did. He quickly hand-built a giant “shrimp barn” next to his house, with views of the Mission Mountains and grazing cattle, and now believes he’s got a sustainable system for raising and harvesting protein-packed shrimp.

He sells them live, by the pound, because he said he would have had to get burdensome U.S. Department of Agriculture permits if he killed and processed the shrimp before selling them. Instead, he scoops the wriggling crustaceans with a big dipper net and puts them in ice water, so the shrimp are essentially “asleep,” as he says. Then, packed in a plant-based container to go, they'll keep in a refrigerator for a few days. He envisions people stopping in for a pound on their way to a barbecue at Flathead Lake in the summer, for example, and he might try farmers markets in the area.

“My brother pioneered how to haul them live to farmers markets,” he said. “I’m getting a tank to do it.”

He likes to eat shrimp on hunting trips in the Missouri River Breaks or cook them with steak for a surf’n’turf.

“My wife makes a delicious shrimp scampi with butter, garlic, salt and parsley,” he explained. "They're great with some cocktail sauce."

His input costs include salt for the water and bags of food for the shrimp, and he has a system set up to keep the animals healthy with circulating water. He also uses a type of bacteria that eat the shrimp waste.

“The shrimp in turn feed off the bacteria,” he said. “So if you can get the bacteria and shrimp right, your survivability rate and growth rate is phenomenal. I’m getting a gram and a half and two grams of growth every week.”

That means there’s no pollution and the shrimp are much more efficient at creating protein than say, raising cattle, which Vaughan has done.

“It’s a sustainable, low-impact type of farming,” he said. “I'm not using no natural resources."

Word-of-mouth interest is slowly spreading, he said, but his only marketing right now is his personal Facebook page and a few business cards.

"A lot of local people want to stop. There’s a lot of interest. I gotta turn the interest into sells. People would show up and we net out of a tank live and ask how many they want and then put them in fresh ice water.”

Along with the batch he got from his brother, he buys bags of 10,000 nearly invisible juvenile shrimp from farms in Texas or Florida, then raises them here in Montana.

“I can’t sell them as organic because the food has a wax binder that can’t be classified as organic yet,” he said. “But I control their environment from the time they’re born. There’s no impurities, so they’re easier to cook. You don’t even need to remove the sand line on their back.”

The water has to be kept around 84 degrees, and he’s got his lights on a dimmer so there’s no immediate shock for the shrimp as they go from light to darkness.

“When the lights go out instantly, they go crazy and hit the side of the tank. It sounds like a baseball bat,” he explained. “So I try not to stress ‘em.”

His automatic feeders and the coverings over the tanks are his inventions, he note.

“The beauty of my production area is I’m the first guy that I’ve seen on the Internet or anywhere that’s put full covers on his tanks,” he said. “My brother, he’s dripping water off the ceilings, the walls and the floors are dripping wet. I said I’m not going to work in that kind of environment."

He overbuilt his building to control for humidity, he said.

"Five minutes at my brother's and you're sweating through your shirt," he recalled.

Dave Renn, the beginning farmer program director at the nonprofit Community Food and Agriculture Coalition, said he chatted with Vaughan when he was still in the planning process. He thinks Vaughan might have a shot at catching on in Montana, a place where shrimp usually have to travel frozen and dead for thousands of miles before they hit the dinner plate.

“It always seems like the more variety the better at the farmers market,” Renn said. “Folks are used to shopping for things at the grocery store, so any time a creative new producer presents something new, it’s only going to strengthen the market.”

Vaughan has researched shrimp farming, including perusing a study from Texas A&M University, and found that poorly treated shrimp often lose their antenna. He likes to point out that the antenna on his shrimp are almost always in place.

Mission Valley Shrimp is located near the corner of Highway 212 and Dublin Gulch Road near Charlo, Montana.

The work will allow the stream channel to reclaim its historic glory and connect vital wildlife migration routes, according to state officials.