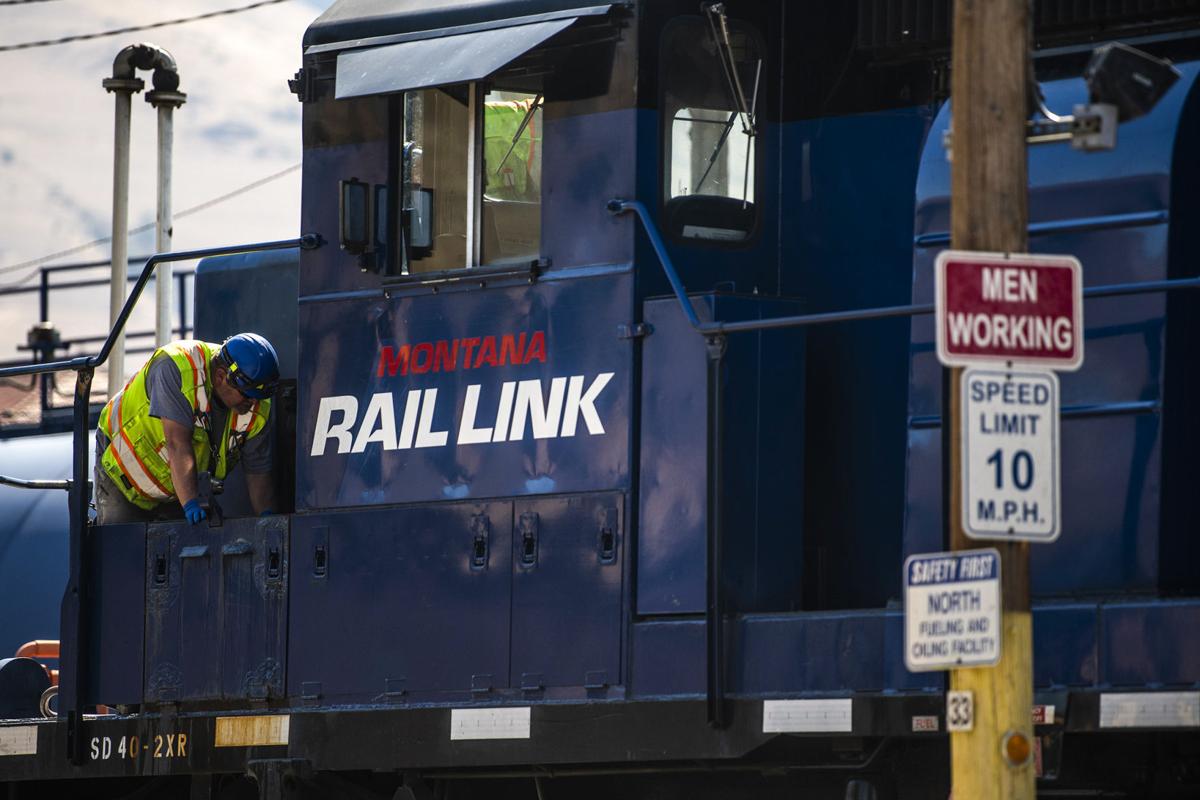 A Montana Rail Link employee works on an MRL locomotive at the Missoula yard recently. The company will hire a project manager to direct and and coordinate the installation of a positive train control safety system on 50 locomotives and hundreds of radio towers in the next several years. 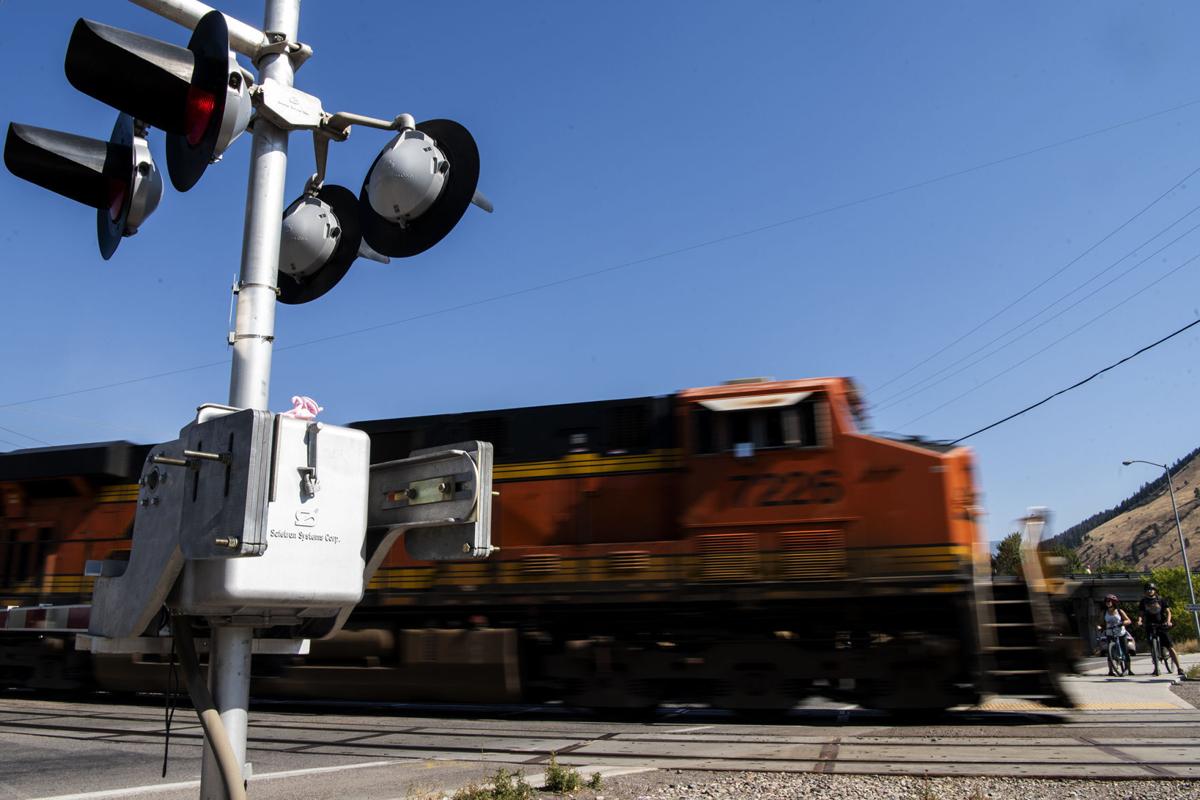 Bicyclists wait at the West Greenough Drive crossing in Missoula as a BNSF locomotive goes by. BNSF is federally mandated to install new safety measures in its locomotives. Montana Rail Link, a smaller operator, is doing so voluntarily.

Railroad safety’s wave of the future is lapping up onto Montana Rail Link tracks.

The Missoula-based short line began advertising last week for a project manager to direct and coordinate construction and implementation of positive train control, or PTC.

An expensive safety feature designed to minimize the impacts of human error in the operation of trains, installation of PTC in locomotives, trackside signals and office control computers was required by Congress by the end of 2018 for the nation’s seven Class I freight railroads. Each was given until the end of 2020 to test and certify the system.

Montana Rail Link isn’t a Class I railroad, but as the big boys completed their expensive renovations and proved the value of PTC, the Washington Co.-owned operation opted to dive in too.

“We announced in the fall of 2018 that we would voluntarily install positive train control,” Ross Lane, a spokesman for MRL, told the Missoulian this week. “The way that worked historically, it was mandated that the Class I railroads – BNSF and UP are the biggest ones in the West – install PTC on their networks. There are several requirements but part of it is, do you move passengers?”

Rail Link doesn’t, so is under no obligation by federal law to invest in PTC.

“It’s something our board of directors and our owner just believe is the right thing to do for our employees and for our customers as well,” Lane said.

Last year the U.S. Department of Transportation’s Federal Railroad Administration awarded Montana Rail Link up to $3.5 million to complete preliminary engineering and final design to implement PTC on its line between Sandpoint, Idaho, and Jones Junction east of Billings.

“We’ve had folks internally who are managing that process,” Lane said. “Now we’re at the point where we really need a project manager, someone who’ll be able to procure materials and work with contractors and consultants on the system.”

Lane said MRL will equip roughly 50 of its blue locomotives with PTC supporting devices, and “an almost entirely new signal system” on its 655-mile line.

BNSF, which operates through Montana’s northern route and is one of the two largest railroads in the U.S, led the effort to implement PTC, fitting out 5,000 locomotives and 11,590 route miles with the technology by the end of 2017.

Amtrak’s Empire Builder, which carries passengers across BNSF’s route on Montana’s Hi-Line and beyond, is also fully equipped with positive train control on 469 locomotives and some 900 route miles.

Lane said a warning sound occurs in the locomotive cab if a train is going too fast in a speed zone.

“So the crew is still controlling the train, but in the event they don’t make the required action, PTC would stop the train,” he said.

Such a safety measure could have prevented a collision at a river crossing near Bonner on a dark cold night in November 2014. The lead BNSF locomotive of a westbound loaded grain train plowed into the back cars of an empty eastbound train.

The two men driving the locomotive were hospitalized with minor injuries. Investigators from the Federal Railroad Administration found that they in essence ran a red light.

On the other hand, positive train control probably would not have stopped a recent collision on MRL tracks a few miles farther east. Shortly after 1 a.m. on Aug. 18, a westbound train couldn’t stop in time to avoid an overturned vehicle on the tracks near Turah. PTC won’t prevent vehicle-train accidents or those caused by track or equipment failure.

Implementation of PTC will cost Montana Rail Link tens of millions of dollars, and Lane said the railroad has no firm deadline.

Ironically, the safety measures come in the wake of MRL’s safest year in its 33-year history. The company received an American Short Line and Regional Railroad Association’s President Safety Award for the Pacific Region based on accidents, derailments and injuries to employees in 2019.

“We operate a very safe railroad, but to keep making progress this is just another tool to add to the toolbox,” Lane said.

View of Earth from SpaceX capsule

View of Earth from SpaceX capsule

“It’s bringing to light Native history," Monica Gilles-Brings Yellow explained. "That’s not something that’s a concept that’s in the past. These are actual people that lived."

A 17-year-old teenager missing for two weeks after running away from a troubled boys school in northwest Montana has been found in Seattle, his family said.

A man in his 80s serving 12 consecutive life terms in prison died Wednesday in a Boulder facility run by the Montana Department of Corrections.

Missoula County will host a three-hour virtual Montana Passenger Rail Summit starting at 10 a.m. Thursday to educate and advocate for the restoration of passenger rail service to southern Montana and continued support for Amtrak's Empire Builder.

A Montana Rail Link employee works on an MRL locomotive at the Missoula yard recently. The company will hire a project manager to direct and and coordinate the installation of a positive train control safety system on 50 locomotives and hundreds of radio towers in the next several years.

Bicyclists wait at the West Greenough Drive crossing in Missoula as a BNSF locomotive goes by. BNSF is federally mandated to install new safety measures in its locomotives. Montana Rail Link, a smaller operator, is doing so voluntarily.