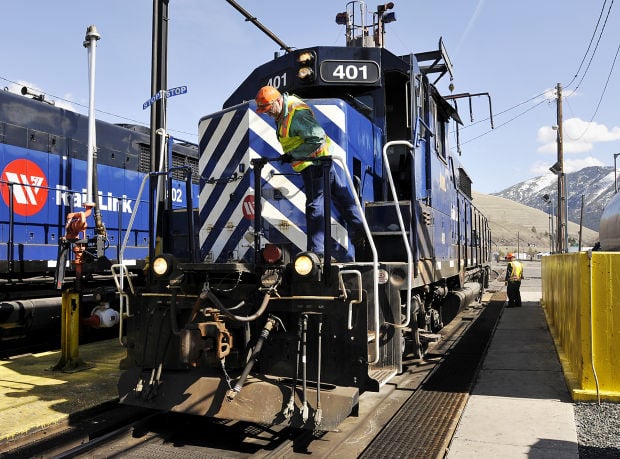 John Miller, a journeyman machinist with Montana Rail Link, checks the front of a locomotive while machinist apprentice John Dunning, right, does a visual inspection of the running parts during a daily inspection and service at the company’s railyard in Missoula on Tuesday. Montana Rail Link was named 2013 Regional Railroad of the Year by Railway Age magazine, the industry’s oldest trade publication. 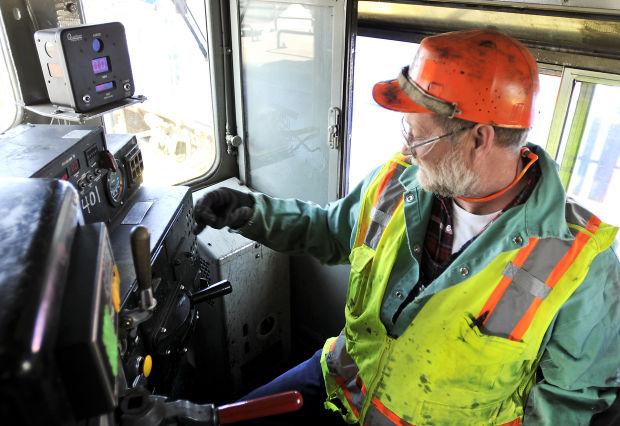 Miller checks the gauges, brakes and air pressure during an inspection in the locomotive’s cab on Tuesday. 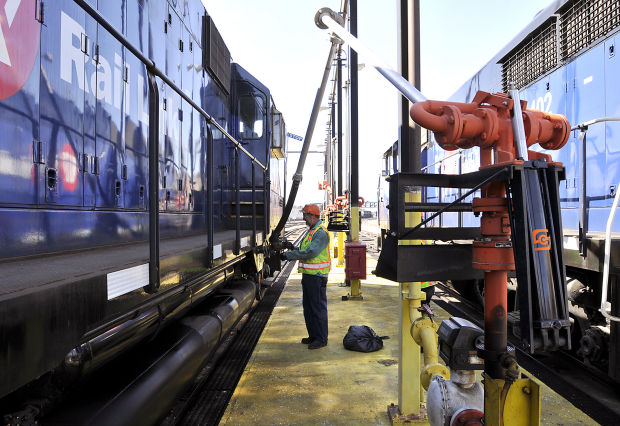 John Miller fuels the locomotive with diesel at MRL’s railyard Tuesday. Besides the daily inspections and service, some repairs can be done in Missoula, while the heavier jobs are done in Livingston.

Given the color of its locomotives, it’s fitting where the folks at Montana Rail Link learned they’d been named an esteemed national trade magazine’s 2013 Regional Railroad of the Year.

It came, said company president Tom Walsh, from out of the blue.

“We really had no expectations of winning it,” Walsh said Tuesday. “It’s kind of funny. On Friday, it just kind of popped up on an Internet site. I think it came actually as an email to somebody, and there it was: Montana Rail Link won this award.”

Walsh finally got a call Tuesday morning from Douglas John Bowen, managing editor of Railway Age in New York, that made it official.

The magazine, which dates back to 1856, also bestowed its Short Line Railroad of the Year honor on Gardendale Railroad of Texas.

Both awards will be presented in Atlanta on April 30 at the annual meeting of the American Short Line and Regional Railroad Association. Each railroad will be featured in the April issue of Railway Age, which Bowen said is due out in a couple of weeks.

“It’s definitely a huge honor for us to receive,” said Walsh, who’s in his 10th year as president of Missoula-based MRL. “There isn’t any other award out there in our industry that looks for the Railroad of the Year. I mean, it just doesn’t exist.”

Montana Rail Link, a unit of the Washington Group of companies headquartered in Missoula, went into operation on Oct. 31, 1987, and celebrated its silver anniversary last year.

“You can give an award for a lot of reasons, and I guess the word we’d use here for MRL is cumulative – not anything in particular that it did last year; it’s just what it’s done consistently over a period of time,” Bowen said.

Rail Link, which owns more than 900 miles of track and employs 1,000 workers in Montana and Idaho, is one of 16 Class 2 railroads in the U.S., according to the Association of American Railroads. Commonly called regionals, Class 2 railroads have budgets of between $20.5 million and $277.7 million. The Central Oregon and Pacific is the Northwest’s other regional line.

The vast majority of the 550 railroads in the U.S. are Class 3’s, or short lines. There’s just a handful of Class 1’s, including Texas-based Burlington Northern Santa Fe and the Union Pacific.

Railway Age gives its annual awards, in part, because “there are a lot of good short-line and regional railroads out there,” said Bowen. “It’s not just the Big Five or the Big Seven, depending on how you measure them.”

Montana Rail Link, he said, “is really a big railroad and it moves a lot of materials. And the fact that it’s handing off all the time to and from Burlington Northern Santa Fe … I don’t know how to put it. It’s not that it’s invisible, but maybe sometimes it’s obscured.

“Yet Montana Rail Link has racked up an impressive record over the years, just moving all kinds of goods. It’s not a single-source mover of goods.”

Bowen said freight carriers such as Rail Link historically have been poor about promoting themselves, and Walsh admitted his company probably doesn’t do enough to shine its public image. Most of the headlines MRL appears in are about an occasional accident or a controversy such as the coal trains that use its line en route to the West Coast.

Walsh, who joined MRL as an accountant in the shaky weeks before the company gained federal approval in 1987, said the award validates what the railroad has long been all about.

The company’s goals since industrialist Dennis Washington founded it have been to be “the best of the best” in three categories: safety, customer satisfaction and ingenuity.

MRL has won national safety awards, which measure safety not only for employees but for the communities its trains pass through. The most recent one came in 2012, and for the past three years Rail Link has been well below the average in recordable incident rates that many industries use.

“Our rate is below grocery store level,” Walsh said.

The railroad also bends over backward to satisfy its customers big and small.

Just Monday, Tricon Lumber of St. Regis had an immediate need for a center beam car, a demand that many railroads can’t or won’t honor, said Walsh. Tricon had its car the same day.

“We had a tremendous business opportunity in hand that was burdened by many logistical challenges,” said Paul Willis of Willis Enterprises, which began operating its giant wood chipper at the Bonner mill site in January. “MRL not only helped us navigate those engineering and operating hurdles, but they helped us optimize our opportunity to the benefit of our companies and our mutual customer.”

As for ingenuity, Walsh said MRL was a pioneer among small railroads in the early 2000s in instituting hydra-switch technology, which eliminates hand switching in its Missoula and Laurel yards. A decision to trim traditional five-person crews to two certified engineers, and an agreement with the city of Missoula to install auxiliary power units on its locomotives have been “incredibly efficient,” Walsh said.

APUs allow engines in the train yard to keep running through cold nights without their 3,000-horsepower engines running, limiting noise and emissions and saving fuel.

Walsh said its relations with BNSF, which owns track on both ends of MRL’s Laurel-to-Spokane line, have never been better.

That was part of what the magazine editors looked at when they chose Montana Rail Link, said Bowen.

“They’re a small rural railroad – 900 miles, believe it or not, is a small railroad – that nonetheless has a big impact on the area they serve,” he said. “They transcend the immediate area they serve because a lot of times they’re delivering goods from or bringing their goods into the global community.

“I know it sounds kind of trite, but that’s what they do.”

A look at Montana Rail link:

Montana Rail Link named Shortline of the Year by BNSF

Montana Rail Link’s 957-mile system from Huntley to Sandpoint, Idaho, has been named BNSF Railway’s 2013 Shortline of the Year.

The average number of coal trains traveling through Missoula has remained flat the past three years, according to Montana Rail Link.

John Miller, a journeyman machinist with Montana Rail Link, checks the front of a locomotive while machinist apprentice John Dunning, right, does a visual inspection of the running parts during a daily inspection and service at the company’s railyard in Missoula on Tuesday. Montana Rail Link was named 2013 Regional Railroad of the Year by Railway Age magazine, the industry’s oldest trade publication.

Miller checks the gauges, brakes and air pressure during an inspection in the locomotive’s cab on Tuesday.

John Miller fuels the locomotive with diesel at MRL’s railyard Tuesday. Besides the daily inspections and service, some repairs can be done in Missoula, while the heavier jobs are done in Livingston.