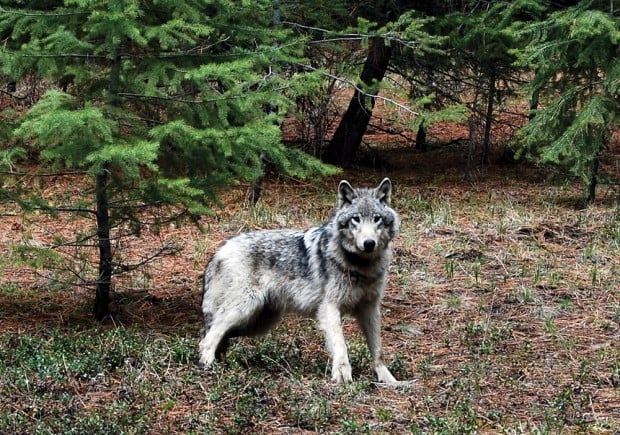 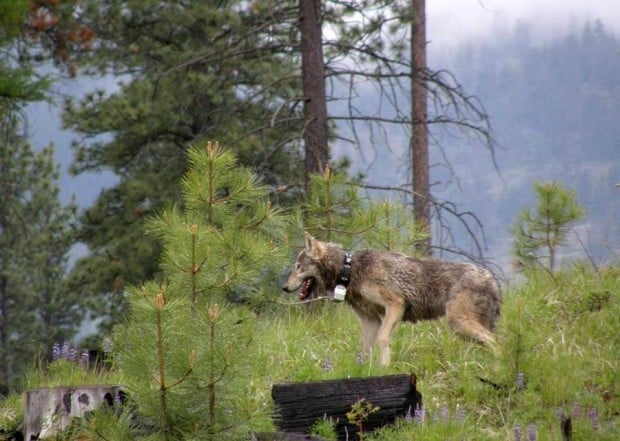 A male wolf is released after being trapped an fitted with a radio collar on the Colville Indian Reservation onf June 5, 2012.  The Tribe named the group of wolves in the Sanpoil River region of the reservation the Nc'icn Pack, which means "grey mist as far as you can see" in the Okanogan language.

HELENA — The public response to the plans for this year's wolf hunt in Montana has been staggering: A whopping 6,500 comments have been received on the proposal set for approval Thursday by the Fish, Wildlife and Parks Commission.

Driving the renewed interest is a proposal to expand the hunt to include trapping for the first time, along with bow and rifle seasons.

"It's safe to say the real issue here is trapping. That's generated the single most response, on both sides," said FWP spokesman Ron Aasheim.

FWP commissioners gave an initial nod to trapping in May when wildlife officials told them that it is a necessary element to reduce the wolf population. Opponents decried the proposal as cruel and morally wrong, warning that other animals and pets would be caught in the traps.

Supporters of trapping and wolf opponents applauded the plan, with many saying it didn't go far enough because it prohibited snaring, which is a noose that captures an animal around the neck.

FWP has been under pressure by ranchers and hunters to do more to reduce the wolf population just a year after a congressional budget rider removed federal protections for the animal from Idaho and Montana. They complain that the rising wolf population threatens elk herds and livestock.

Last winter, hunters killed 166 wolves out of a 220-animal quota and the population rose at the end of 2011 by 15 percent to at least 653 wolves. That prompted wildlife officials to consider more ways to make the hunt more effective: trapping, the elimination of most quotas and expanding the length of the season.

Those proposals are up for final vote on Thursday.

Aasheim said some components of the plan have changed since the commission gave its tentative approval in May. The rewritten plan calls for trappers to buy a special trapping license, which would allow them to take three wolves instead of the one wolf that can be taken with a general wolf license.

Bow and rifle hunters would still only be allowed to kill one wolf.

Another change would require trappers to immediately release animals they did not target but which became captured in their traps, if those animals aren't injured. An injured animal would have to be immediately reported.

FWP also proposes relaxing the 24-hour reporting requirement for hunters in the backcountry. All hunters would be required to report a wolf kill within 24 hours but if the hunters are in the backcountry, that 24-hour period begins after they reach the trailhead.

Finally, the agency wants to open the general rifle season the day after the Oct. 14 end of the archery season, instead of taking a five-day break between seasons as originally proposed.

Those proposed changes will be discussed at Thursday's meeting, but Aasheim said the public comment period for other parts of the proposal, including trapping, is over.

In expanding the hunt, Montana regulators would replicate Idaho, where wildlife managers estimate the wolf population has dropped by at least 400 over the last year.

The Missoulian reports that hunters in Idaho shot 255 wolves and trapped 124 others this season. Biologists estimated Idaho had 746 wolves at the end of 2011.

In June, 13 wolves from two packs roaming on ranches just north of Helena were shot and killed for ongoing livestock depredation.

This fall’s Montana wolf hunt will face critics who say it’s too extreme and not extreme enough.

HAMILTON – The state of Montana’s Livestock Loss Board came to Hamilton Friday to hear from people with concerns about wolves.

HELENA – The liberalization of Montana’s 2012-13 wolf season took a step forward Thursday when the Fish, Wildlife and Parks Commission gave in…

A male wolf is released after being trapped an fitted with a radio collar on the Colville Indian Reservation onf June 5, 2012.  The Tribe named the group of wolves in the Sanpoil River region of the reservation the Nc'icn Pack, which means "grey mist as far as you can see" in the Okanogan language.