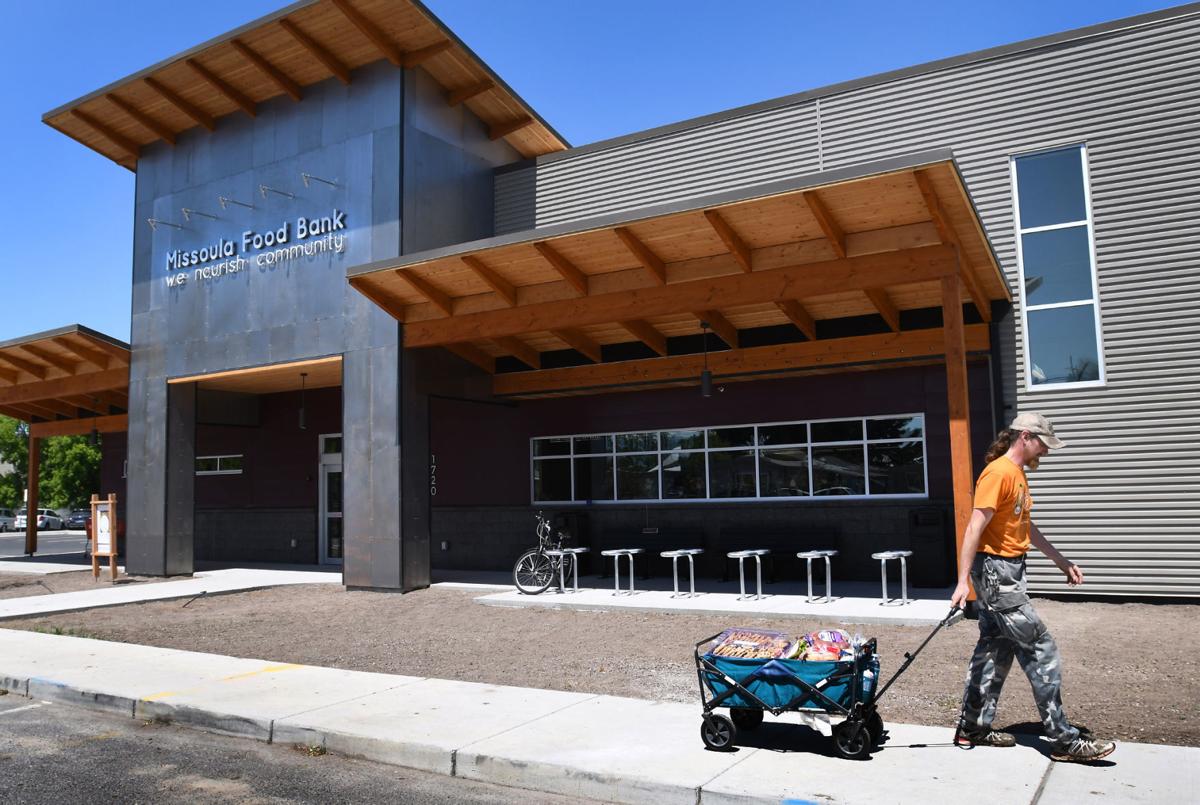 John Duggan leaves the Missoula Food Bank on a summer afternoon, in this 2017 file photo, with a wagonload of groceries on the opening day of the new 22,500-square-foot facility on Missoula's west side. The facility was built with the help of New Markets Tax Credits. 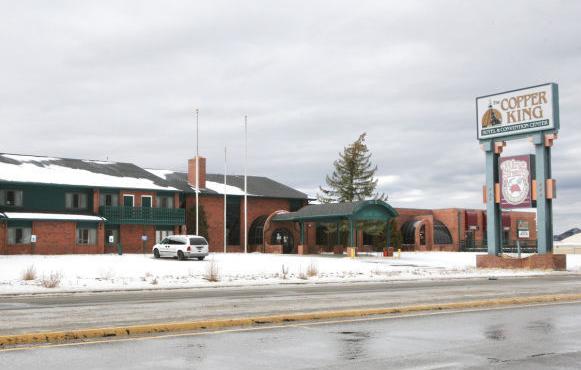 The Copper King Hotel is one of many recipients of New Markets Tax Credits through MICDC. 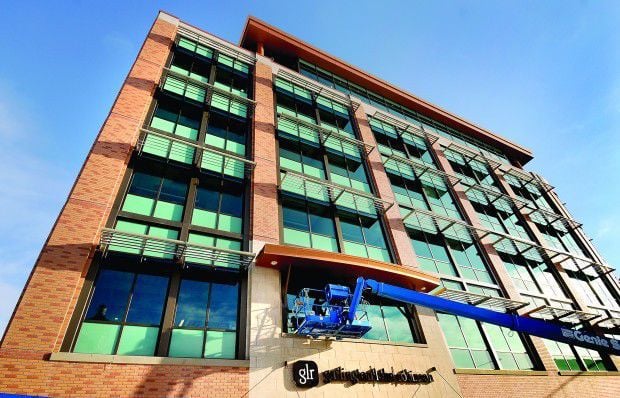 The GLR building in downtown Missoula was financed in part by New Markets Tax Credits from the MICDC.

As talk of national tax reform efforts heat up at the federal level, the fate of a federal tax credit program that has played a crucial role in several large economic development projects in Missoula is up in the air.

The head of a local community development finance institution is even headed to Washington, D.C., to try to convince Congress that Montana has benefited greatly from the program.

Dave Glaser, president of the nonprofit Montana Idaho Community Development Corp. (MICDC) in Missoula, said that the New Markets Tax Credit Extension Act of 2017 is supported by both of Montana’s U.S. senators — Democrat Jon Tester and Republican Steve Daines — and is especially important for rural states.

“It’s important for people to understand the big impacts that can come out of tax reform and what does it actually mean on the ground,” he said. “There are ways of utilizing the tax code, like New Markets Tax Credits, that benefit rural, low-income communities like ours here in Montana and Idaho.”

Since 2009, Glaser said $322 million in tax credits have been used to catalyze more than $445 million in investments in more than two dozen projects such as an aquatics facility in Polson, an armory building in Helena and a remodeled historic hotel in Butte that have created more than 2,500 jobs.

The Senate version of the bill, S. 384, has been co-sponsored by Daines, who praised the MICDC last year when it was approved for a $90 million NMTC award from the federal government.

“Through the New Markets Tax Credit we can continue to create good-paying jobs right here in Montana,” Daines said in a statement. “I am pleased to see that MICDC has once again received this award and am excited to see what work the credits will make possible.”

Tester has indicated he will support the bill, which would extend the program indefinitely.

“I have seen firsthand the important role New Market Tax Credits play in Montana’s economy, and I will continue to ensure that the folks at the Montana & Idaho Community Development Corporation are able to access this critical tool to help create jobs and increase economic activity,” Tester said in a statement.

The NMTC program has also been backed by Aaron Brock, the executive director of the newly built Missoula Food Bank.

“This is a big project and we turned over every rock we could in terms of financial support,” Brock said. “Montana and Idaho CDC’s ability to bring New Markets Tax Credits to the table was an essential component. Without New Markets Tax Credits, this project would not have happened on the same timeline or scale as it did.”

Although the tax credits have large bipartisan support, the only question is whether a major tax overhaul, which is on President Donald Trump’s agenda, would include New Markets Tax Credits.

Bob Rapoza of Rapoza Associates, a Washington, D.C., lobbying and government relations firm, said a dozen U.S. senators have indicated they’ll support the bill, along with 72 cosponsors of the U.S. House version of the bill, H.R. 1098. However, one of the priorities of the Republican-led Congress is tax cuts, which by definition don’t leave a lot of room in the budget for other things.

“There’s a lot of interest in cutting the corporate tax rate, and that’s expensive,” Rapoza explained. “(There’s also interest) in cutting the personal tax rate and doing other things that would reduce the cost to businesses of their tax liability. There is also a desire to pass a tax bill which does not add to the federal budget deficit. The calculation is how far, how much do all those things cost and then can we add in something in like the New Markets Tax Credits?”

Congress extended NMTCs for five years as part of The Path Act in 2015, and Glaser would like to see the program permanently put in place.

“Low-income, rural communities are left outside the financial mainstream,” he said. “It’s really hard for us to attract business and capital, and New Markets Tax Credits gives us this big magnet to attract flexible capital to attract investment in our state.”

There are two main criteria for qualifying for the tax credits from the MICDC: the project has to be over $4 million, and the project won’t happen without the help of the tax credit subsidy. Glaser said the MICDC still has a fairly large amount of tax credits available for people with ideas for projects, as long as they fit those two criteria.

“The NMTCs are a small part of the tax code that get lumped in with other things,” Glaser said. “It’s important for all of us in Montana to understand what parts of the tax code are important for rural states. There are so many examples of projects here that benefit every Montanan and benefit Montana businesses that didn’t have the capital or services to expand without New Markets Tax Credits.”

Federal loans given to Montana groups for rural community improvement

Montana and Idaho are getting some very good economic development news.

Nonprofit: We have $80M to subsidize Montana development projects

Down payment gifts fulfill need in Missoula, across Montana

Affording a home in Missoula is not easy, and the rest of Montana and the United States aren’t much better.

Within a few hours after the Missoula Food Bank officially opened its shiny new $6.6 million headquarters to the public on Tuesday, executive …

The U.S. Treasury Department announced this week that it is awarding $65 million in new markets tax credits to the Montana Community Developme…

$11.4M hotel, restaurant under construction in Polson, with help from tax credits

POLSON – A new $11.4 million Red Lion hotel is under construction in Polson, and will have an attached conference center and a MacKenzie River…

Downtown Missoula is officially one of the greatest places in America

You know them by heart; can tick them off one by one.

Calling it a “game-changer,” a local nonprofit organization has announced that a zero down payment assistance program for homebuyers will be m…

Do you have any ideas for a development project in Montana, Wyoming or Idaho that would cost at least $4 million? The Montana & Idaho Comm…

John Duggan leaves the Missoula Food Bank on a summer afternoon, in this 2017 file photo, with a wagonload of groceries on the opening day of the new 22,500-square-foot facility on Missoula's west side. The facility was built with the help of New Markets Tax Credits.

The Copper King Hotel is one of many recipients of New Markets Tax Credits through MICDC.

The GLR building in downtown Missoula was financed in part by New Markets Tax Credits from the MICDC.